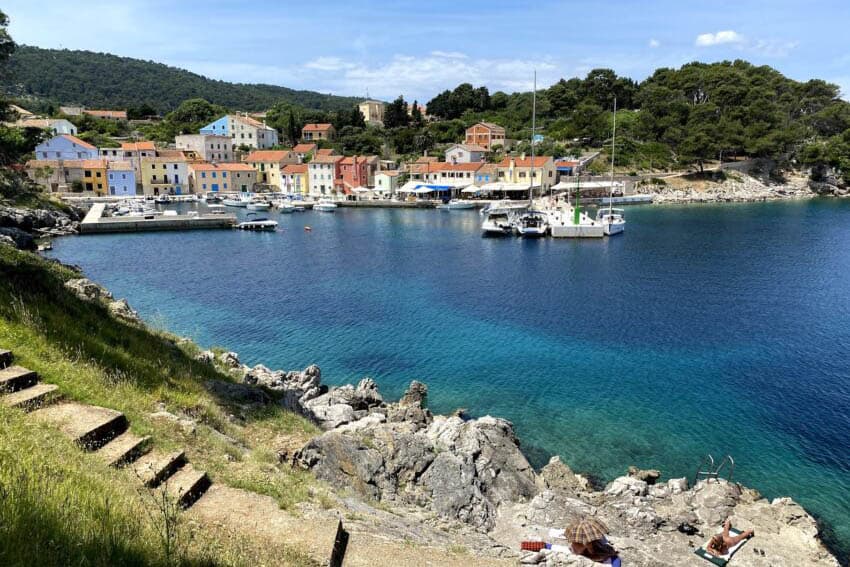 After Earning Her Yoga Certificate, A Chance to Enjoy Croatia’s Many Charms 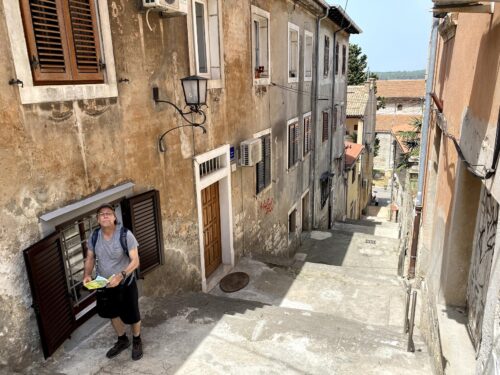 A four-week intensive yoga instructor course was the reason I flew to Croatia in spring 2021.

It turned out to not only be an excellent yoga course, but I got a chance to discover this popular tourist attraction on the coast of Europe.

We didn’t go looking for the Chocolate Museum on our last full day in Zagreb Croatia; the chocolate museum found us.

After studying the excellent free guide titled “Welcome to Zagreb, the Capital of Croatia” we had picked up at the airport, our first stop had been the Museum of Broken Relationships, which we had reached by taking the world’s smallest funicular, both described in the guide.

We were looking for the Museum of Illusions, about a week and some adventures by bus later, when, noticing several signs for the nearby Musej Cokolade, we decided to give it a try.

We hadn’t heard about it or read about it in the guidebook and it could very well be dry and boring, but there would surely be some compensatory chocolate in the gift shop, we figured.

Not only was the stylish little museum on an upper floor of an unremarkable city building the furthest thing from dry and boring, but I also came to see it as emblematic of the Croatia we discovered on our trip as a whole:  unpretentious and surprising, profound and absolutely beautiful. 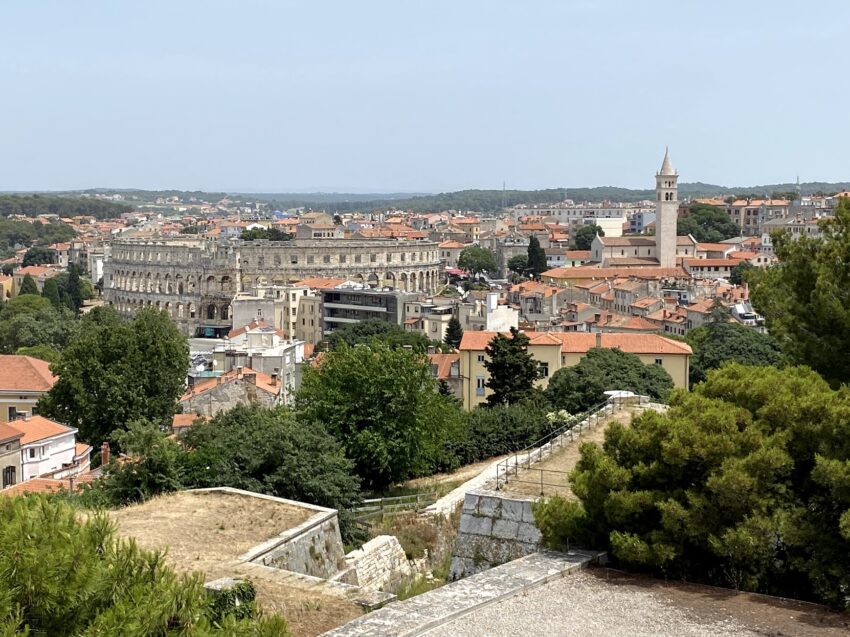 Our experiences in Zagreb, the otherworldly Plitvice Lakes National Park a couple of hours by van away, and the seaside city of Pula all took place during the last week or so of June 2021, when my husband Brian arrived in Croatia. But I had been there since late May, on the idyllic island of Losinj, undergoing an intensive 200-hour yoga teacher training. 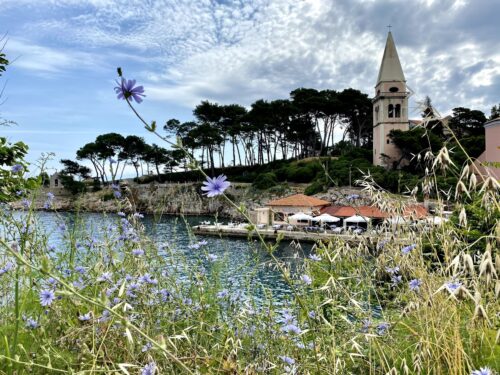 I had picked the course out of hundreds of yoga teacher training courses, in part, because of the professionalism of the Himalayan Yoga Institute website and description of the course.

But, let’s be honest, we chose it because of the glimpses of the Adriatic Sea in the background of some of the photos.

Lovely as they were, the photos could hardly do justice to its crystal blue and green waters. I hadn’t thought to bring a snorkel and mask, but I didn’t need one.

Standing waist-high in the water, I could watch little fish swim around me.

As a blogger warns at Royal Croatian Tours, “The Adriatic is so clean that you’ll be put off swimming in other bodies of water for life.”

A good thing to have brought would have been some swim booties or sandals, as a reason the water is so clear is that the sea bottom isn’t sandy. Almost all of the beaches in Croatia are pebbly or rocky.

Lucky for me, the leather sandals I’d brought made the transition from land into the water as smoothly as a duck boat and they were also cleaner and less odiferous once they were dry. 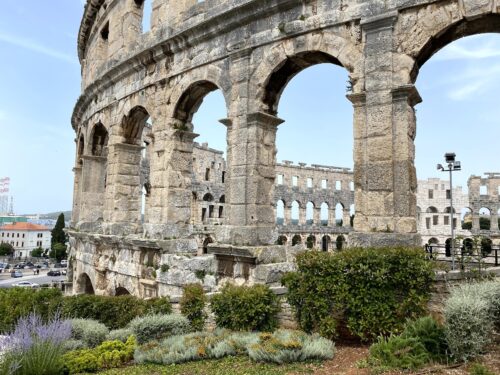 I discovered my sandals’ aquatic potential when one of my fellow yoga instructor-trainees and I impulsively jumped into the Adriatic Sea in our underwear one day while walking back to our villa after eating ice cream sundaes at The Moby Dick Gelateria Cafe in the town of Mali. On a hot day, the serene blue water was hard to resist.

And so were the Croatian ice cream sundaes we ate on the island. Served in tall glasses with names like Fantasy, my favorite one consisted of blueberry and lemon gelato, floating in strawberry juice, decorated with strawberries, blueberries, sliced peaches and kiwis and topped with whipped cream and a cookie.

Our wise and extremely exacting teacher introduced us to the Croatian sundae after our first week or so of unexpectedly unrelenting yoga practice, study, and meditation. She also led us on some unforgettable excursions around Losinj and the nearby island of Cres by hired van and boat. 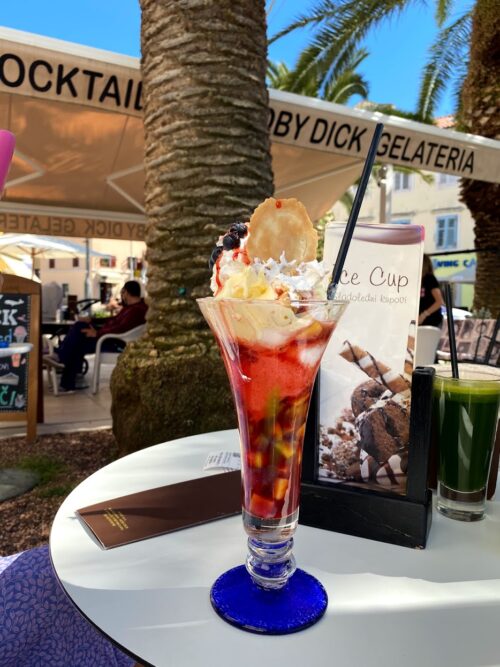 I often noticed its savory fragrance by the roadside and found it plentiful at Dolac, Zagreb’s largest farmer’s market in the city’s main square.

“In 1906, the world’s first drops of immortelle essential oil were manufactured in Martinscica, Cres,” a rustic wooden sign proudly announces in four languages at the Oil House.  Convinced of its merits, I bought several jars to take home.

In Lubenice, a tiny ancient fort city on the top of a cliff in Cress, we drank water from a spigot in the town center and dropped into the quirkiest of the Croatian museums I visited, the Sheep Breeding Museum.

A couple of weeks later, having passed the course, the most rigorous one I have ever taken, four of my five fellow yoginis and I took another van ride and a ferry to Zagreb, where I met Brian at the guest house I adored, Rooms Zagreb 17, in the very center of Zagreb’s bustling cafe and nightlife.

We had booked it for two nights but stayed another two nights, after returning from a bus trip to Pula, a port city on the tip of the Istrian Peninsula famous for its olive oil, pungent truffles, and the best-preserved Roman ruins outside of Italy. 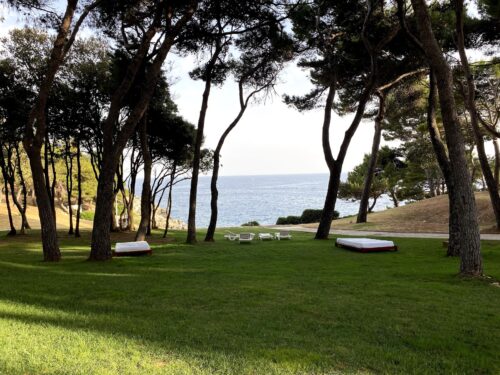 In Pula, we stayed for three nights at the Park Plaza Arena, an unpretentious resort hotel with serene sea views, a magnificent buffet breakfast, and soothing Mid-century Modern decor.

We sea-kayaked, saw dolphins and a hedgehog in the moonlight, visiting the Pula Arena, an ancient Roman coliseum in the city center; and enjoyed some traditional Croatian food, including cheese with truffles in it, figs, and pizza.

The hotel also offered Covid-19 rapid testing, a very helpful feature, as a negative Covid test result obtained within 72 hours of departing Croatia was still required in late June for re-entry into the United States.

In between, we joined a guided tour, driven by the best tour guide ever, Luka with Viator tours to Plitvice Lakes, the deservedly vaunted national park, and Unesco World Heritage site with 16 gorgeous lakes colored heavenly blue and green by the lime in the water and connected by waterfalls.

The affable and learned Luka explained everything to our four fellow travelers and us from Croatia’s history, marked by constant struggle; to contemporary music including Balkan Beat and Turbofolk to Croatian craft beers. We also learned that Vlasic pickles were first produced by Franjo Vlasic, who was Croatian.

Back in Zagreb on our last full day, we entered the Chocolate Museum with a little trepidation but left it delighted.

The reason we hadn’t heard much about it, we found out, was that it had only debuted in the fateful year of 2019 when after a successful opening, the world fell into the grip of Covid.

Making our way through seven thoroughly charming rooms, holding a box with compartments filled with chocolate samples corresponding to each room.

We were immersed in the history of chocolate consumption first by Aztec warriors, then high society to regular folks, and finally children.

Along the way, we learned about a new kind of naturally pink chocolate called ruby chocolate, that the word chocolate comes from the Aztec word, xocolatl, for “bitter water,” and that  Croatia’s contribution to chocolate history is the addition of crisped rice into chocolate bars.

It was in the chocolate fountain room, while giddily sipping sample spoonfuls of a delicious dark chocolate sauce that I reflected, though not for the first time, that I love Croatia.

Irene, the manager, is so personable and helpful. She made Zagreb feel like a second home to us.

Kelli, our favorite receptionist, gave us the best recommendations for Pula restaurants and attractions and also helped us set up a rapid Covid test.

Rooms from about $150/night

Ask for Luka. You will NOT be disappointed.

Plitvice Lakes and Rastoke tour– Small-Group Full-Day Tour from Zagreb – From $132.64 per person

Way off the beaten path. It was like an exotic herbal sauna when steam was released during the essential oil production process.

Brian Schultz, the author’s husband at the Museum of Illusions, Zagreb – Photo by Mary Carey 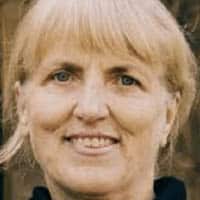 Mary Carey is an adjunct instructor of journalism and public relations at the University of Massachusetts, Amherst. She was also a reporter for the Daily Hampshire Gazette for many years.