Key West Celebrations: Fun in the Sun All Year

Key West Florida, there is no other place quite like it.

From the days of the rumrunners and speakeasies, Key West has always been a party town.

Located closer to Cuba than to Miami, this island oasis is Florida’s irreverent southernmost tropical paradise.

Locals are called Conchs, and that’s pronounced “Konk.” If you weren’t born there, but you’ve lived here long enough, you might be granted the title “freshwater conch.”

This is an anything goes, come as you are kind of place. “One Human Family” is the official philosophy; this warm-hearted motto sums up the unique island that is Key West.

Their “Floribbean” vibe and free-spirited outlook contribute to celebrations that are wacky and unforgettable.

This is a festival that happens every night in Key West. There is nothing more fun than heading to Mallory Square to celebrate the iconic sunset.

The experience has captured the spirit and history of the island ever since the event took off in the late 1960s.

Show up around two hours before sunset and immerse yourself in crowds of locals and visitors alike who flock to the water’s edge, waiting for the magic to happen.

Tight-rope walkers, jugglers, clowns, and more are part of the spectacle, as everyone gathers to watch in unison as the glowing pink and orange orb slips slowly into the sea. 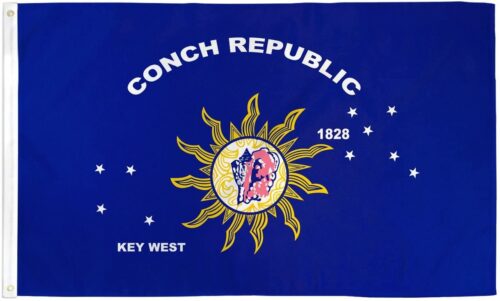 ‘Welcome to the Conch Republic’ is the sign you will first see when you get off the plane at the airport.

What? Did I get on the wrong flight? Nope. Key West is America’s own tiny Caribbean island, known as the Conch Republic to locals who fancy themselves an independent country.

In April of 1982, Mayor Dennis Wardlow seceded from the Union—for reasons that we won’t get into now. With tongue firmly planted in cheek, the City Council and Mayor declared the island an independent country.

This lasted just a few days, but it got great press and ended up being a clever way to promote tourism.

Today, in honor of their brief taste of freedom, the people of Key West set aside 10 days every April to celebrate their independence with a festival.

It is said that Columbus brought the first seeds of the tangy and sour tropical fruit to the Caribbean in 1493. Then, in the 1800s, after discovering that the tart citrus fended off scurvy, the juice was added to the sailor’s daily ration of watered-down rum. Key limes have been a part of the culinary and libation offerings ever since.

hangout when he lived in Key West in the 1930s. Each year fans of Papa’s writings and exuberant lifestyle come together to celebrate Hemingway Days.

The crowd-pleasing event is held for two nights in July. The contest typically attracts more than 100 burly, bearded contestants from around the world. With a preliminary and then final round, the panel of judges included the previous year’s winner. One observer was heard explaining, “it’s just a beauty contest for chubby old men with grey beards.” That comment was a little harsh but had some truth to it.

The Key West Gay Pride event is legendary for its laid-back style and its open and accepting atmosphere. The island’s accepting ideology and “One Human Family” philosophy have created one of the world’s most integrated and unique communities.

Celebrated in June of each year, the celebration is one of the largest and most popular LGBTQ celebrations in the United States. The main parade takes over the entire city for several hours, with drag shows, dance parties, and a fair street rounding out the events.

Fantasy Fest is an annual 10-day party in paradise, a wonderland for grown-ups. It was started in 1979 by a small group of locals to bring visitors to the island in a typically quiet but beautiful season. Fun-loving partiers from around the world bring their creativity and imaginations as they descended every October, complete with costumes, parades, and excitement.

The collaboration with the community takes on a life of its own, with a combination of local cuisine, talented artists, and fundraising for various local charities.

The Conch Shell Blowing Contest celebrates the historic importance of conch shells. Preserving a bit of Key West’s color and history, they remain an enduring symbol of the Florida Keys.

The Old Island Restoration Foundation holds the annual contest each spring in the garden of the island’s Oldest House located at 322 Duval Street.

The tradition of blowing a conch shell as a signaling device in the Florida Keys began centuries ago. When the local economy was based on salvaging shipwreck cargoes, sailors attracted attention to sinking ships by blowing piercing blasts on the fluted pink, pointy shell.

The contest is open to all ages. Participants are judged based on the quality, duration, loudness, and novelty of the performance.

Where else but in Key West? This parade celebrates creative recycling, off-beat artistry, ingenuity, and human movement to propel the sculptures. The people-powered mobile creations meander through Key West’s downtown area.

The colorful sculptural floats use pedal power from tricycles with quirky, bright costumed participants, fantastically decorated bicycles, and other moving pieces of art. Revelers line the route and follow along the 1.5-mile length of Key West’s Duval Street.

The event’s purpose is to honor the late Key Largo folk artist and sculptor Stanley Papio and his rebel artistry and innovation. Presented by the Key West Art and Historical Society, the Papio Kinetic Sculpture Parade will resume in the Summer of 2022.

Key West goes to the dogs in a wiener wonderland pooch parade each New Year’s Eve Day, bringing in the New Year in grand style.

The dachshunds and their fans gather at the corner of Whitehead and Fleming Street for a brief sniff and greet at noon on December 31st.

The long-bodied, short-legged canines and their people lead off the annual parade by walking down the middle of the street until they reach Duval, or as far as their little legs can carry them.

This is a dog-friendly free event; no registration is required, as is kid and adult-friendly. Outlandish costumes are encouraged and appreciated but not required. Some standout costumes from past walks have been flying ace “The Red Baron,” a hula dancer, a flamingo, and a hot dog with his ketchup and mustard bottles. For more information: keywestdachshundwalk@gmail.com

The Key West Lobster Fest is a fun annual event that marks the beginning of the Lobster Season.

A celebration of this favorite crustacean is held at the beginning of August every year for a four-day street fair.

Lobster lovers worldwide make their way to Key West to celebrate their love for lobster.

Fantastic food, free concerts, and artisan market stalls are all part of one of the summer’s biggest parties.

The Caribbean spiny lobster found throughout the Caribbean and the Florida Keys does not have claws like the North Atlantic lobster. The savory tail meat is a succulent delicacy, once considered “poor man’s chicken “and only fed to pigs and goats. Not any longer.