The Lake Region of Chile 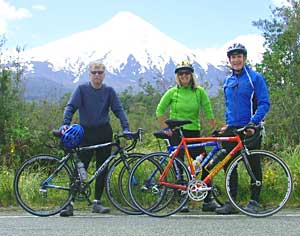 The environment shares the same rugged appearance from formidable mountains to icy glaciers to craggy fjords.

But, if you’re like me and have never been to Kiwi country, well then, Chile might win you over as the closer and more affordable destination.

My travels include visiting temperate rainforests and world-class volcanoes, old-world Bavarian farms, and indigenous tribes — all about 150 miles apart.

It’s September in Chile, springtime in the Southern Hemisphere and the buds on the trees are popping. As in New York, the weather oscillates between 45-60 degrees with the constant smell of rain on the way.

A Bavarian Escape in Puerto Varas

We arrive in the charming little village of Puerto Varas overlooking a mirror-smooth lake called Llanquihue, the largest in Chile.

Hotels All Over Chile

I’m feeling a bit queasy from the bumpy, dirt road coming from Puerto Montt airport. Our driver negotiated every turn with skill but unless you like riding bumper cars, the inferior roads are not for the faint of heart.

From the front window of the Hotel Cumbres is a lakeside view of Osorno volcano along with Mt. Calbuco and Mt. Tronador. The beauty is hypnotic.

Osorno was once one of the most active volcanoes in the southern Chilean Andes. The last recorded eruption flowed in 1869.

A brisk walk around town reveals dozens of wooden colonial homes, a church modeled after the Marienkirche in the Black Forest, and a Gasthaus built by the first German settlers in 1852. Direct descendants of German settlers have completely assimilated into the daily Chilean life but the language and cuisine are still alive.

Along the boardwalk, the sun seeps through the clouds and lights up the lake. It’s the beginning of a week’s worth of sunshine, an unusual but welcome weather pattern that turns the Lake Region into a beautiful painting.

The Lake Region includes the ninth and tenth regions of Chile – from the heart of dairy farming to the mountains of Patagonia. It’s aptly named after the many lakes, islands, rivers, waterfalls, and archipelagos in the area.

Gateway to Adventure in Hornopirén

The next morning, we bump and bounce our way along Route 7 to a sleepy little town called Hornopirén. We arrive after boarding a ferry for 30 minutes in Caleta La Arena to cross the Reloncaví Estuary and continue along the Pacific Bay coastline for another half hour.

Our driver slows so our guide can point out an ancient hardwood tree. “That one is called the Alerce tree and can live up to 4,000 years,” notes Gerardo Niklitschek of ALSUR Expeditions.

Before the 1973 protection law was passed, the endangered tree was almost completely wiped out by logging and exporting practices. This one is still young, only about 25 years.

Hornopirén is not a rich tourist town. The terrain is pockmarked with loose gravel, latent infrastructure, and a lack of sidewalks. But it’s the spectacular snow-capped summits of Hornopirén and Pumalín National Park that keep travelers coming back.

The town is a portal to outdoor adventures of all kinds: sea kayaking, rafting, biking and trekking tall volcanoes over 5000 feet. In my case, it’s a reason for a 50-minute boat ride to the virgin hot springs of Termas de Llancahue.

Along the way we see groups of honking sea lions and commercial salmon farms. We dock facing two bubbling pools of natural spring water… then I realize I forgot my bikini. Oh no! As the sun sinks into the archipelago and the air cools, my friends unwind in warmth while I dangle my feet over the side. Don’t make the same mistake because there are no suits to buy or borrow at Termas de Llancahue.

We spend the night back in Hornopirén at a rustic dwelling called Hosteria Catalina. Our hosts greet us with a staple of quinoa and boiled chicken followed by room keys to twin beds and shared bathrooms.

The temperatures drop fast at night and I bundle up tight because the heater in my room takes a while to kick in. Outside sheep mill about, an occasional stray dog looks for scraps and in the morning the faint cry of a rooster wakes me.

Today we arrive for lunch on Chiloé Island, a giant landmass separated from the Chilean mainland by the Chacao Canal to the north and Gulf of Ancud to the east. The Pacific Ocean lies to the west.

Our guide Gerardo insists that Curanto en Hoyo is made using the same cooking method as the New Zealand favorite Hangi. Again, having never been to New Zealand, I’m not sure what to expect.

What makes Curanto en Hoyo so unique is that rather than cooking it on a stove, it’s steamed underground. Behind the bucolic little farmhouse is a round shed with a shallow hole in the center of the room.

Everyone squeezes around the food to watch as our senior hosts gather the steamed potatoes, prawns, clams, chicken, smoked port, shrimp and oysters. It’s a feast beyond anything that could fit inside an oven. The owners share this local specialty with guests from all over the world.

To make the stew, a fire is lighted in the hole by burning wood and debris under a bed of smooth rocks. Then the shellfish is added and covered in between layers of seaweed and large nalca (Chilean rhubarb) leaves. The food aromatically steams for several hours and is then ready to eat.

“The tsunami was so big that it even took the dead from their graves.”

The town of Maullín is special because it’s here that the strongest earthquake ever measured was recorded in 1960.

It measured 9.5 on the Richter scale and generated one of the most destructive Pacific-wide tsunamis in the 20th century.

Maullín was closest to the epicenter and suffered the worst. Thousands died and the economy was destroyed. But, with help from eco-tourism, the town has slowly but surely danced their way back to life.

A dozen youths gather in the town square to show off a national dance called Cueca. The dance is taught early in their childhood.

The boys are dressed in cowboy hats, flannel ponchos and boots with spurs. The girls smile brightly waving handkerchiefs high above their patterned dresses and aprons.

The Cueca is a parody on the courtship between a chicken and rooster. The handkerchiefs symbolize the feathers on a rooster’s comb amorously twirling to the lively sounds of a guitar and harp.

There are no hotels in Maullín and it rains plenty, but if you’re a bird lover, the Maullín river attracts 70% of the bird species in Chile and there’s also active diving for Abalone.

Dancing with the Huilliches in Puyehue Park

From the Cueca dance, I went on to participate in an ancient practice with the Huilliche Indians in the Osorno region in the famous Puyehue National Park, part of the Andes foothills.

The Huilliches are a subset of the semi-nomadic hunting and gathering Mapuche tribe that still maintain their own oral language, beliefs and culture. Only 26 direct descendants remain so it’s special having all of them together to greet us.

Their ancestral ideology centers on listening to the land, birds, trees, rain and rivers, all the earthly elements that are often ignored in the modern world.

They form a parade in colorful skins and knitted ponchos and play instruments like the trutruca (bull horn) and guitar. The park boasts several volcanoes among stunning natural wonders including thermal baths, a ski center, walking trails and camping areas.

The Huilliches’ deference for Mother Nature is magical. They worship the slender Canelo tree because of its fruit and pay homage to the Gol-Gol river and Indio waterfalls for the abundant fishing.

At one time, the Huilliches hunted this park for their survival, but today the government has them in charge of overseeing the conservation of it.

We finish the visit surrounded by a long table of native appetizers including chauchas, an early potato variety, a plate of maize mote and bean-stuffed empanadas. As we’re leaving, a little girl rushes for the door and hands me a twig from the sacred Canelo tree tied up with a stem of wheat, bay leaf, and seed of laurel. It’s a sign of good luck.

The Puyehue Wellness Spa and Resort

Overnight accommodations at the Puyehue Wellness Spa and Resort was just the luck I needed. The five-star hotel sold me a bathing suit so I too could finally enjoy the benefits of the hyperthermal baths rich with minerals that stimulate circulation and energy.

The resort is an all-inclusive opportunity to play 18 holes of golf, dine in two specialty restaurants (one Italian, one Fusion French), swim in three in-outdoor thermal pools, play tennis, go horse-riding, enjoy wine-tasting and so much more for one affordable price.

The Dutch owners have added a six-lane bowling center and polo grounds to the resort.

“We see ourselves as popular as New Zealand in five years” promises the General Manager. From the attention I was given, there’s no reason why they shouldn’t be already.

Only 15 minutes from Peurto Varas, set back on a muddy narrow road, is a large guesthouse called Casa Molino. We didn’t spend the night but were treated to a catered cookout of grilled shish-kebab and white fish Ceviche.

With full glasses of Chilean red, we tread lightly down steep wooden steps to a locked gate along Lago Llanquihue. The still water is glacier cold.

The charming owner, Angela Turner, leads us through 11 custom-decorated guest rooms named after popular farmhouses in the area, all with views of the lake and surrounding volcanoes.

The Rancho Espantaajaros is in the town of Quilanto, Chile, only ten miles from Frutillar. It’s a yummy German-influenced buffet in a spacious dining room adjacent to a petting farm and playground.

You can’t miss the colorful exterior of Del Piero Restaurant at Manuel Rodríguez 1081, in the dairy-drinking town of Osorno. The restaurant includes wonderful Italian dinners and tasty desserts.

And a Car Museum

Just when I thought I knew what to expect next in the Lake Region, our driver parks at Bernardo Eggers Auto Museum. The collector opened his rare selection of Studebakers to the public in 1995. It’s now the biggest auto museum in Chile.

The Auto Museum Moncopulli operates as a not-for-profit and accepts dozens of lost models for display every year.