Zagreb is the capital and largest city in Croatia.

Zagreb is a year-round destination and is rich in Austro-Hungarian values, post-WWII architecture, urban events, and street art.

Zagreb grasps all of these characteristics, and together they make up Zagreb’s culture.

The people here will tell you about how much less attention their fair city gets compared with the hoards of visitors who flock to the beach resorts of Split and Dalmatia.

But the unique elements of the capital make for a bucket list destination.

“Croatia was dominated by foreign powers for centuries, and each one of them left behind some influence of their cultures, and this is especially true in terms of food. Croatia’s cuisine is a melting pot, including Italian, German, Austrian, Hungarian, and Turkish flavors,” said Rodin.

Zagreb has the highest number of museums per capita of any world capital.  Some of them are quite unique.

The Croatian Museum of Naive Art is a peculiar museum unlike any other– it’s a must-visit. The museum is filled with art from non-professionals and those who have little to no experience in the field, and altogether this creates an optimistic and light-hearted atmosphere.

The artwork is still impressive, but the lack of professional knowledge adds to a unique twist. Art pieces display scenes of local life, everyday events, and destinations outside of Zagreb.

Another unique museum, and right across from the Croatian Museum of Naive Art, is the Museum of Broken Relationships. It is located in the Upper Town of Cirilometodska.

The museum’s focal point is on broken relationships and features real personal items from couples and family members, and a story is attached with each item.

Some of the items include funny stories, while others are more sentimental and serious.

An example of an item in the museum was a magnifying glass. The story behind the object was that a man was given it as a present from his ex-girlfriend as memorabilia before she left.

The man was never sure why he was given this but thought it was maybe because his ex-girlfriend always said she “felt small” around him.

The Museum of Broken Relationships is an ever-growing display, so the visit will never get boring if you choose to visit more than once.

Spica in Zagreb is a unique part of their culture, and it can be celebrated by both travelers and natives.

has to offer, one of the most important things to visit is the famous Spica,” said Rodin.

Spica is a traditional pastime in the capital and consists of putting on your best clothes and meeting up with your friends for lunch or a coffee. This ongoing tradition is celebrated on Saturdays and gives people time to unwind and take a break from their busy week.

Essentially, it’s a “fashion runway.” Spica is an enjoyable occasion for those who feel like dressing up and getting out of the house, and if you are in luck you might be spotted by magazine photographers who are waiting to capture pictures of the best dressed in the city.

The Spica tradition is a fun excuse to get together and dress up with no specific purpose.

Full of people and charming antiques is the Britanski trg Flea Market in Hrelić on Sajmišna Cesta, Zagreb. It is one of the largest flea markets in the country and is set on an open square.

Every Sunday, tables full of both valuable antiques and miscellaneous objects are laid out and ready to be picked through. Over 100 sellers are set up at the square and are eager to begin bargaining with antique goers.

Regardless of the value, every bric-a-brac or pricy antique tells a story of Zagreb and offers an excellent history of the capital.

Once the week is over, the square transforms into a fruit and vegetable market. Once Sunday rolls around again, it is transformed back into the quirky flea market.

The sun and planets are not only in outer space—they’re in Zagreb. The capital has a one-of-a-kind ground-level solar system made of sculptures, located in downtown Zagreb in Bogovićeva street!

In 1971, artist Kozaric sculpted a two-meter diameter sphere, which is known as the “grounded sun.” Years later in 2004, artist Preis invented the idea behind a sculpture scale model of the solar system.

The idea was implemented, and metal spheres in the shapes of the planets are now scattered strategically around the city, in the same setup as the real-life solar system. This artwork display is now known as the Nine Views.

So yes, Zagreb has its very own solar system.

Another new attraction on Zagreb’s agenda is the Medvedgrad complex. The complex is home to a castle and fortress, and renovations will be made in order to improve the sustainability of the Medvedgrad nature park. 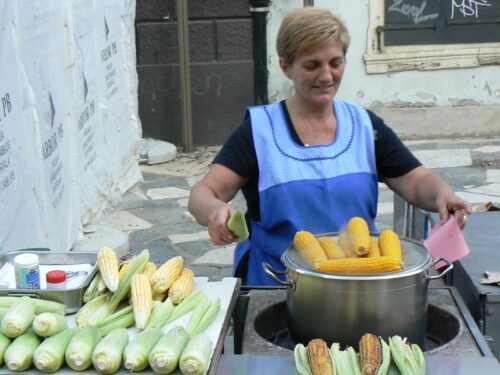 Tasty delicacies and food traditions are reflected directly from their culture.

One popular street food in the city is sweet corn grilled right in front of you.

Although the capital offers these delicious dishes, Zagreb is especially recognized for their coffee.

Eli’s Caffe is one of the very best coffee shops in the capital.

Fresh coffee is roasted every single week at Eli’s Caffe, which makes for fresh drinks.

If you want a heartwarming and unique cafe experience, pay a visit to Croatia’s very first silent cafe. The  Silent Cafe is located in Ulica Knez Mislav 7, Zagreb.

The main goal of the cafe is to show that it is possible for those with disabilities to work and that they play an important role in society.

Customers have the opportunity to learn the basics of sign language, which can be taught through the cafe’s tablets on each table.

The culture of Zagreb is unique due to the blends of surrounding countries’ practices.

“Zagreb teems with rich cultural life. The historic city center with its classicist and secessionist facades and the lively atmosphere of its streets, squares and fountains, year-round theatre, music and dance festivals makes Zagreb one of the most interesting Croatian cities for art and culture,” said Rodin, head of tourism.

The medieval and rural roots of Croatia are reflected in the capital and displayed throughout the city through museums, churches, and artwork.

Whimsical ideas like this are what makes Zagreb as interesting a destination as the more popular places in Croatia like Split and Dalmation coast.

It’s worth adding Zagreb to your itinerary!