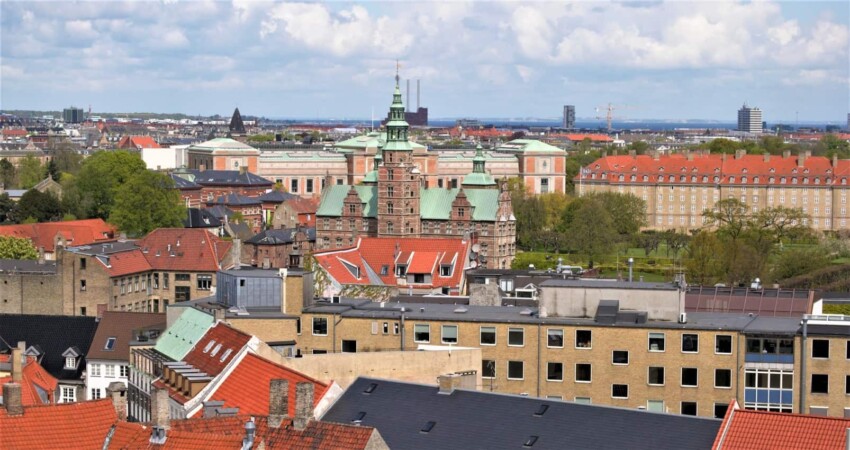 Falling in Love with Copenhagen

This is not nearly an exhaustive list of things I fell in love with Copenhagen for. Your own list might be much longer, but I am pretty sure that BLOX, bikes, coziness, and equality in all possible senses will make it.

Danish eco-aware mindset is reverential to resources – they are very frugal with resources while generous with money they invest in sustainability.

They recycle and repurpose everything – buildings included. In Copenhagen, they give new life to old dock cranes, factories, and shipyards turning them into art galleries, theaters, and pristine apartment blocks.

Here they’ve elevated the architectural functionalism to the state of art. Whether they repurpose something or built it from scratch, it becomes sight in its own right, like the Black Diamond (Copenhagen library and cultural hub), a crystal ziggurat of BLOX (home to Danish Architectural Center) or surreal futuristic condominiums in Amager.

The condensed idea of the functional approach is the combined heat and power waste-to-energy plant whose sloping roof serves as a skiing piste, climbing wall, and hiking path.

It is what it sounds like – this plant incinerates garbage, turns it into electricity and heat, produces more clean water than it uses, looks hip, AND you can slide down from its all-year-round artificial ski slope roof.

That’s beyond mere efficiency. That’s awesome. Bonus points for the chimney that makes funky “smoke rings” made of water steam – just for laughs.

Copenhagen is easily the most bicycle-friendly city in the world. There are more bikes in Copenhagen than people, and it’s not an exaggeration.

The infrastructure, of course, is superb, but it’s more of an effect than the cause.

Biking is not a sport or pastime here, it’s a convenient and mundane way of getting out and about, commute to work, go shopping, take your kids to school, and your pets to the vet.

Apart from each member of the family having their own steed, there are so-called Christiania bikes – absolutely adorable man-powered coaches with the box in front of the driver.

These cargo tricycles are very popular and even members of the royal family use them. Back in 2015, the world went “aww” at the pictures of Crown Princess Mary peddling a Christiania bike with her twins aboard on the way from kindergarten. 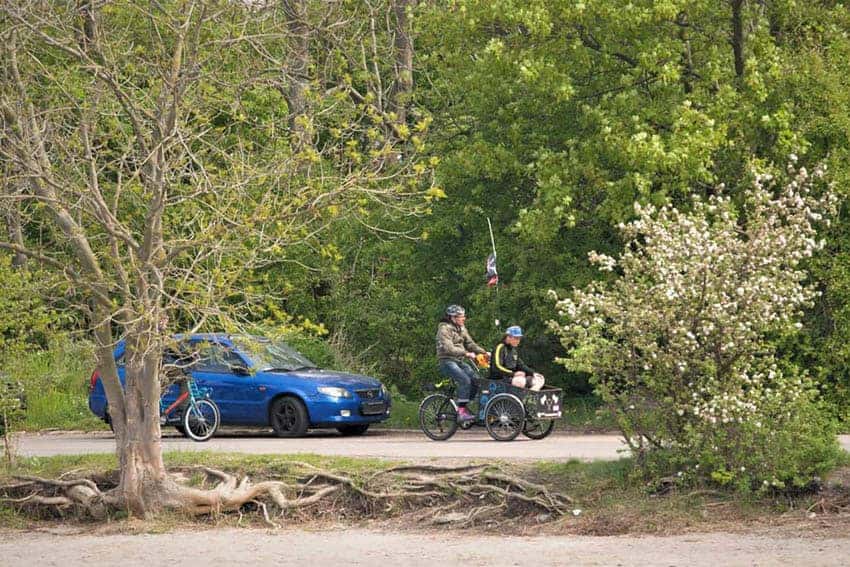 It is only logical then that Copenhagen is probably the only place on Earth where you won’t see a traffic jam made of cars during the rush hours, but will witness quite a bottleneck of bikes instead – a breath of fresh air in all possible senses. Denmark’s ambition to become zero-carbon by 2025 does look promising.

By the way, absentmindedly stepping on the cycling path is another of the few but sure ways to seriously upset a Dane. 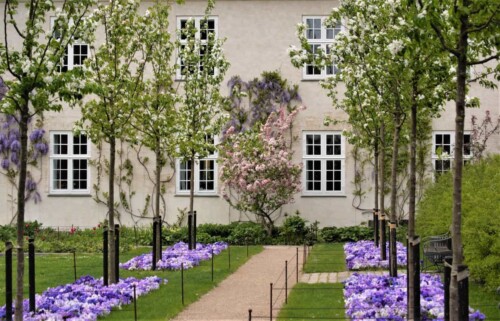 That’s nothing to do with cocoa, candles, warm wraps, and other stuff people outside Denmark associate with hygge. Coziness is the general impression you get from Denmark.

Copenhagen’s population is about a million people but you would never say that. Despite the futuristic edifices of modern making or multiple royal palaces, the vibe you get from Copenhagen makes you want to call it a town in the most endearing way.

Small streets are small without being crammed, vast spaces are vast without being intimidating (take it from mildly to moderately agoraphobic me), one step away from the busiest street it’s peaceful and quiet as if by magic.

That’s where you realize that the world of Hans Christian Andersen couldn’t exist anywhere else, but here, and not that much really changed since his time. There are roses creeping up the walls, brass plates on the doors with names rather than numbers, and old street lanterns that you wouldn’t hesitate to take home and put in an armchair by the fire.

Also, around three corners out of five you will find an immaculate green lawn (which is okay to walk on), with a couple of geese lounging around, a sheltered bench drowning in heartsease, and a group of well-behaved schoolchildren enjoying the outing.

Celebrated around the world for its functionality and simplicity, Danish design has an official home in Copenhagen.

Designmuseum Denmark is the place where everyday objects obtain mesmerizing qualities on account of being put in the limelight.

“Why this teapot in particular?” you ask yourself and fall down the rabbit hole of design thinking.

Exhibits of the museum are all things that can be designed – from cheese knives to motorbikes, grouped by timeline, style, or relevance.

For example, there is an impressive collection of chairs (about a hundred items), ranging from Ancient Egypt antiques to high-tech novelties, with the focus, however, on the golden age of Danish furniture design between 1920 and 1970.

Equality is an ingrained value in Denmark. Danes value sameness and have an antipathy towards difference. This has nothing to do with being xenophobic, though. Being foreign is okay, but, for example, wearing something too loud, boasting, or buying a conspicuously expensive car – isn’t.

It’s a social code known as Janteloven. Although this ethos is not as widely known and popular around the world as hygge is, Janteloven is a concept fundamental for Danish society.  It encourages group behavior as opposed the personal ambitions: we are all just as good as the other person, no one is better than I am.

Even the royalty abides by Janteloven. Remember Princess Mary on the trike? That wasn’t a publicity stunt or anything like it. Danish royal family is modest in their daily lives and genuinely loved by the people for it.

Focus on the Collective We

This focus on collective instead of personal may sound a bit oppressive and dystopian to people from some more individualistic cultures, but the flip side of it is that Danes are comfortable belonging in the community, generous, volunteering, and empathic.

You don’t have to ask them for help. Standing looking puzzled in front of a public traffic terminal is more than enough to prompt people to offer you their assistance.

If you live on the planes and know what flat looks like, I bid you revise your idea of flatness.

The Isle of Zealand (where Copenhagen is situated) was flattened out by the glacier during the Ice Age and its smoothness is the feast for perfectionist’s sore eye.

This is another reason why biking is so comfortable here – imagine never having to peddle uphill.

Yet the best thing about such evenness is that you can overlook the entire Copenhagen and even see beyond from the Round Tower, which in reality is not that tall – only about 35 meters (115 feet) high. The view is breathtaking nonetheless, especially if you are lucky with the weather.

The weather, again, due to the flatness of the land, is as whimsical as it can get. Every cloud that forms out in the sea goes straight at you with nothing to stop it or at least slow it down, so rain gear is a must at all times.

On the bright side, there are rainbows. I’ve seen three during my last 5-day stay in Copenhagen.

The Round Tower is not the only place with a view. There is also The Tower of Christianborg Palace, the Zoo Tower, Axel Towers, Star Flyer ride in Tivoli, or any other spear for that matter.

The most exciting climb among those would be the spear on the Church of Our Savior with a dizzying walk spiraling outside it up to the observation point at 90 meters (nearly 300 feet) about the ground.

Historical landmarks aside, Danes despise high buildings because anything higher than 5 floors sticks out on the skyline like an irritating mole and spoils the view.

Maybe the leveling power of Janteloven is another reason why they hate new tall buildings. “What is this skyscraper thinks it is, sticking out like that? Does it think it’s more important than the buildings around? Outrageous.” 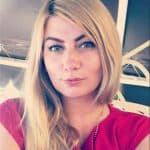 Linda Cartwright is an educator and an enthusiastic explorer of urban landscapes. She enjoys writing, whether it’s about her latest adventure or research papers help for students. Find her on Twitter.