I knew better than to buy a bag of cheese curds when I visited the state of Wisconsin. I mowed through a half-pound of the squeaky fresh nibbles within 30 minutes, throwing my calorie count for the day into a tailspin!

I had just landed at Green Bay, Wisconsin, and headed to Door County to explore for a few days in early December. It wouldn’t be my only experience with cheese curds.

As it turned out, they were on every menu in this region where I dined – battered up, deep-fried, and served with ranch dressing.

My first stop was Renard’s Cheese & Deli, where three generations of the Renard family handcraft a sizable variety of cheeses, including mozzarella, jack, Colby, blue cheese, cheese spreads, and my downfall, the curds.

I struck up a conversation with manager Franca Bueno, who mentioned that it takes 10 pounds of milk to produce one pound of cheese. The milk is sourced locally from 20+ farms. Same with the cherry products, as Door County orchards yield between 8 -12 million pounds annually. These aren’t the pick off the tree and pop into your mouth variety.

Rather, they are Montmorency cherries best suited for pies, cobblers, turnovers, jams, and jellies. In my mind, I imagined Door County being a landscape of dairy farms mingled with cherry trees.

Franca made it known we were lucky to be in Door County in the quiet season of winter. The summer swells with thousands upon thousands of visitors, mostly from Chicago and Milwaukee.

Door County is a 70-mile long peninsula surrounded by Green Bay on one side and Lake Michigan on the other, so clearly, it’s a magnet for water-loving people. Boating, beaching, fishing, waterskiing, and kayaking – that was a given. But was there more? 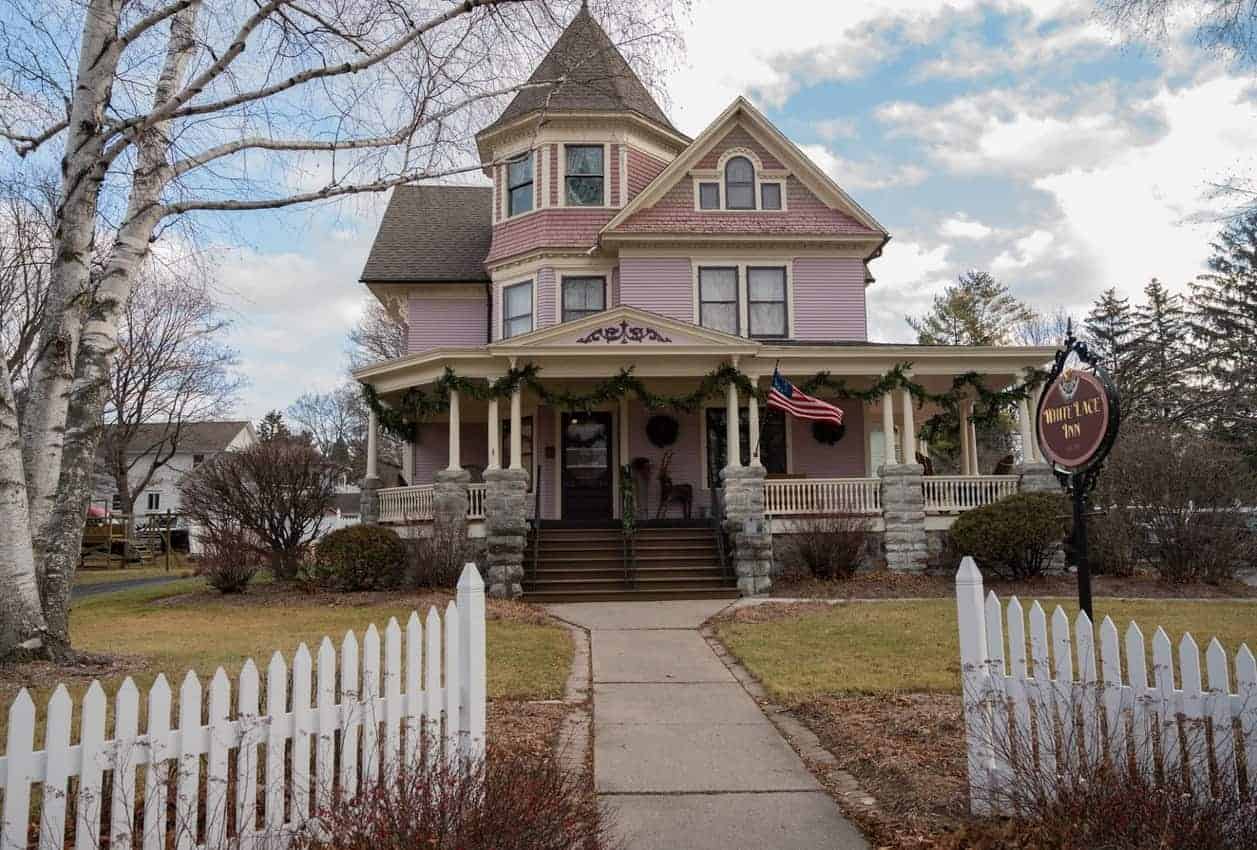 I stayed at the White Lace Inn in Sturgeon Bay, the largest community (9,000) in Door County. The Inn is comprised of four Victorian homes sharing a common yard complete with a gazebo and a miniature pond.

Innkeeper Dennis Statz was very outgoing, toting my bags to the Garden House while informing me there were always fresh cookies, tea, and coffee in the main house.

My cozy flower-themed room had a fireplace, a Jacuzzi, and a 150-year-old cherry wood bed. I was happy.

I spent the next two days exploring some highlights of Door County. First up was Door 44, named for its location on the 44 north latitude, and one of eight wineries on the Door County Wine Trail. Owner Maria Milano, generous with samples of her products, shared that the peninsula is known for producing fruit wines, especially cherry, apple, and grape. 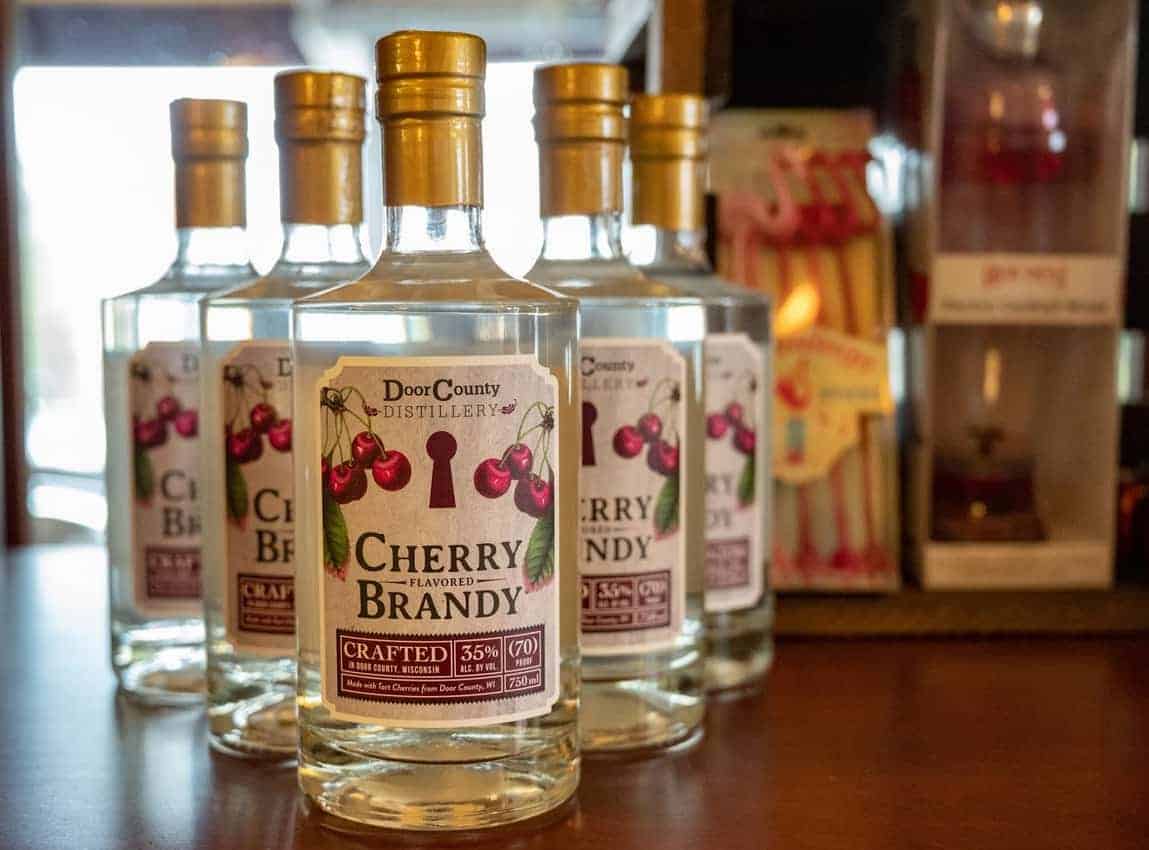 Next was a stop at Door County Distillery and more samples of bourbon and vodka. The Distillery’s award-winning spirits include gin, brandy, whisky, rum, and moonshine, all made from ingredients grown locally.

I got a strong sense of how Door County folks understand the land and make the most of what it yields, bottled with a great deal of pride in their products.

Once past Sturgeon Bay, there was a smattering of small villages caught in a time warp of 40 -50 years ago.

Urban sprawl and shopping malls weren’t part of the landscape. Traffic lights were nonexistent. There was an unhurriedness that prevailed with the locals – from shopkeepers to the traffic.  Hugging the shoreline were Baileys Harbor, Egg Harbor, Ephraim, Sister Bay, and Fish Creek. 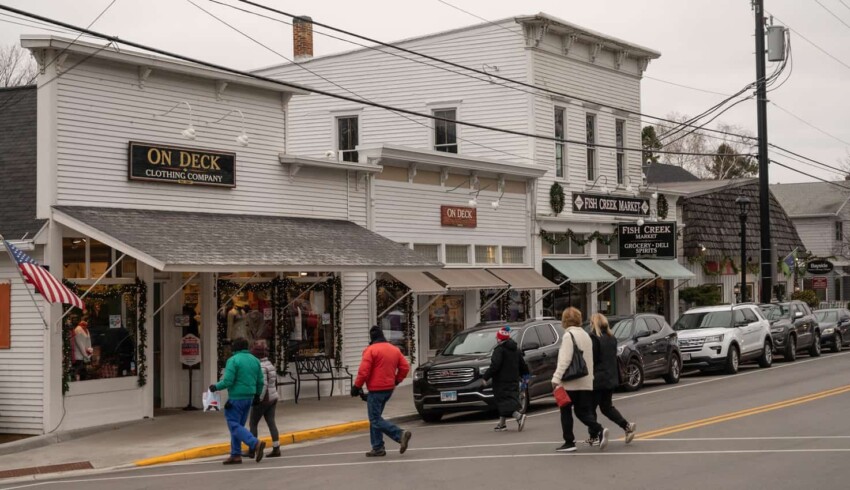 Each had a handful of specialty shops, eateries, bakeries, art galleries, ice cream shops, and boutique clothing stores – spilling over with charm. No matter where we stopped, the proprietors of a shop or eatery greeted our small band of four travelers like long lost cousins they were thrilled to see. 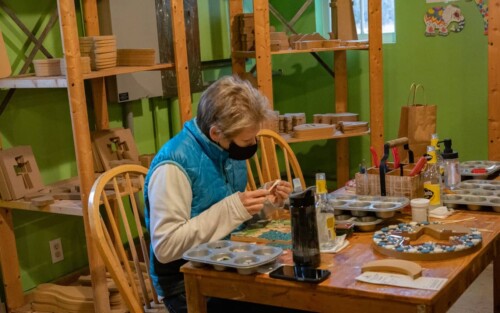 Our December afternoon turned blustery, so we headed to Hands On Art Studio in Fish Creek, where visitors can be an “artist for the day.” The studio is set up for participants to create in several mediums, including painting pottery, crafting mosaic pieces, wood and metalware painting, jewelry making, and fusing glass. The artist in me was ecstatic as I sat for three hours and built a fused glass creation. 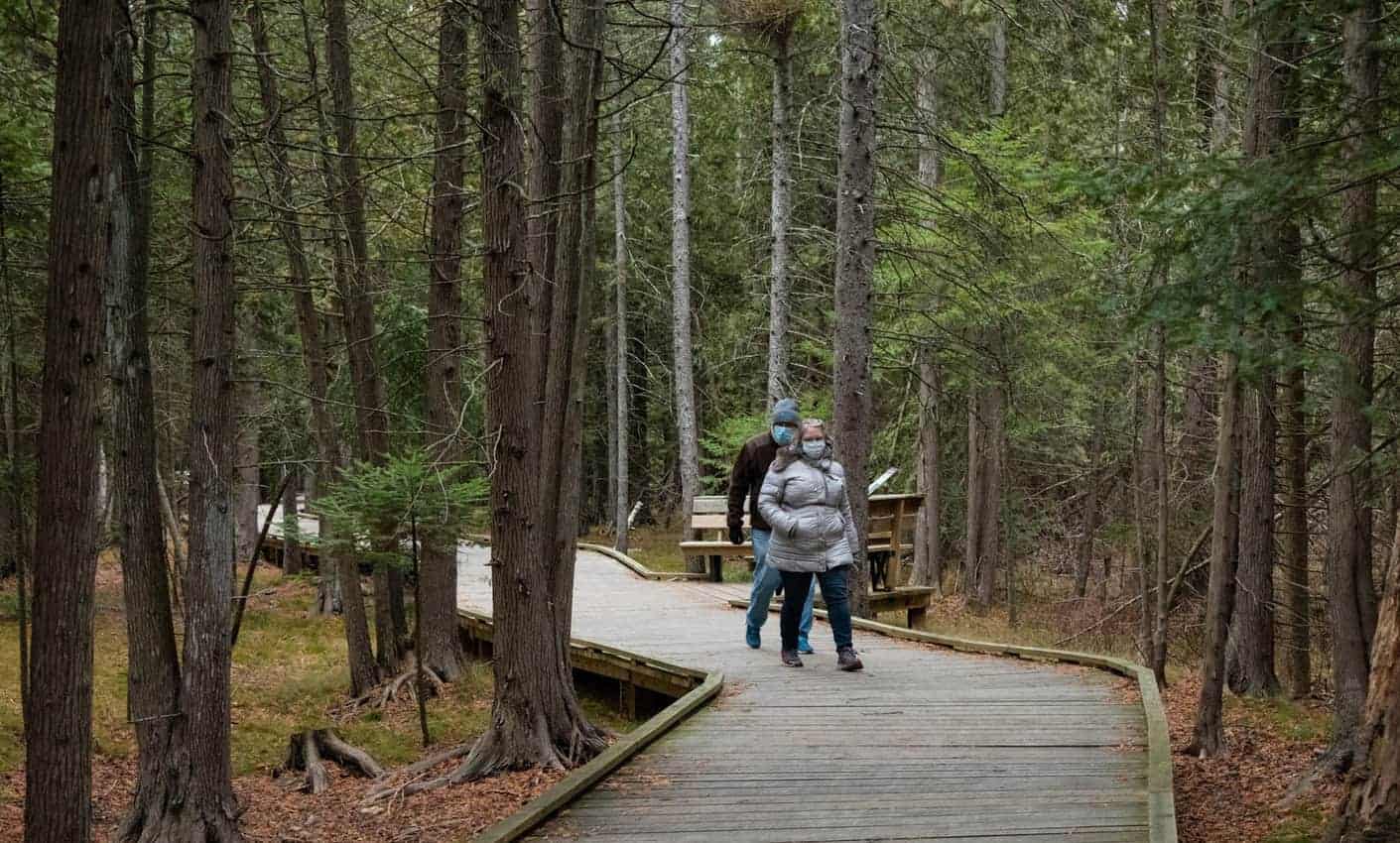 Mother Nature hadn’t gotten around to coating the landscape with blankets of snow, so the trees were barren and the earth ruddy brown.

Opportunities for cross-country skiing and snowshoeing, a considerable part of winter activities in Door County, were yet to come.

With 19 county parks, five state parks, and 53 public swimming beaches, it was clear that Door County folks are keen on public spaces, giving everyone ample room to enjoy the outdoors beyond the water.

The Ridges Sanctuary, a 1,600-acre preserve, is the showpiece of Door County. While a naturalist-guided tour helped me understand the peninsula’s unique geography, it was the guide’s enthusiasm for the land that left me with the biggest impression.

Each one of us has our passions to which we’ll devote our energy.  While land preservation isn’t mine, I appreciated this man’s dedication to the preserve.

One of Door County’s unique experiences is the fish boil, a tradition that Scandinavians may have introduced when they settled in the region back in the mid-1800s.

I confess to not being a huge fan of fish, but getting into the soul of a community means experiencing local customs. So fish boil it was!

Behind the White Gull Inn was a large gravel pit with a massive kettle of water in the middle, sitting on a metal stand. A fire underneath the stand brought the water to a boil.

Pat McMurtry, the boil master, circled round the kettle like a boxer in the ring, ready to make his move. He poked at the logs, adding more as needed to keep a sizable fire going.

He was a man of little words, mumbling that he had been at this job for five years.

Next, Pat added salt and red potatoes (skin on) to the boiling water. After 15-20 minutes, Pat forked out a spud and tested it for doneness. Pat added a steamer basket to the kettle and dumped in a bucket full of whitefish chunks, skin on, straight out of Green Bay.

When Pat determined the fish were cooked, he picked up a quart of kerosene and shouted, “Is everyone ready?” With that, he threw the kerosene on the fire, and that fire blew up 20 feet in the air, sending some of us jumping back a few steps, including Pat. The fireball caused the water to boil over, along with the oils from the fish.

The show was over. The whitefish and taters were carried inside, plated, and served with two lemon wedges, a scoop of tartar sauce, and melted butter.

I dredged my fish in butter, salt, and lemon, and like a trooper, put down a few bites.

The best part of the meal was the deep-fried cheese curds and the cherry pie à la mode.  As for the whitefish, one fish boil will last me a lifetime!

I like to think that folks in my home state of Montana are the most down-to-earth friendly people in America, but Door County locals are a close rival.

I felt the residents genuinely wanted to share their home turf with visitors. The pace of this peninsula was pleasantly slow, in a stop-and-smell-the-roses kind of way.

One of the new buzz words today is hygge, which has Danish and Norwegian roots.

I translate it to mean being cocooned in joyfulness and coziness due to one’s positive outlook and peaceful surroundings.

Perhaps the early settlers to Door County brought hygge with them and passed it down through the generations.

I felt an abundance of hygge in Door County, a result of the people and the land. I understand now why so many people flock to Door County in the summer.