Kenya: on Safari 8 km from Nairobi

Nothing gets your heart pumping like a curious lion inches away from your car window.

Many visitors come to East Africa for the thrill of a big game safari and it might be surprising to know that you don’t have to spend a fortune or travel for days in order to do just that.

Just seven kilometers from downtown Nairobi, the bustling, capital metropolis of Kenya, you can safari through 100 different mammal species and more than 450 migratory and endemic birds, and be back in your hotel in time for dinner.

Nairobi National Park, the first of its kind in the country, was founded in 1946 by the driving force of local conservationist Mervyn Cowie who became its first director.

It encompasses 117 km of open land on the Athi Plains, east and south of Nairobi and it is close enough to spot a craning giraffe neck with a towering high rise building mirroring it in the background. Imagine being able to watch wild animals from the window of your office.

It is so close to the city that visitors arriving at Jomo Kenyatta International Airport report frequent big game sightings on their landing approach.

Protected by an Electric Fence

The park is separated from the big city by an electric fence, but to the south, it’s only natural boundary is the Mbagathi River, while east and west it is the open range of the Kitengela Conservation Area through which many migrating species travel.

Because of this vast open area, the park is a target of poachers, so heavily armed rangers from the Kenya Wildlife Service monitor everything from watch stations, and also roam in vehicles and on foot.

A Drive Through Experience

You drive through at your own pace, stopping wherever you wish as the meandering spider web of roads takes you from flat savannah plains to lush forests, through rolling hills and even a large pool surrounded by papyrus where you might find a couple of dozen hippos wallowing in the mud or a crocodile lazing in the sun.

Animals have the right of way and pay no attention to roads, so at any time you can have an unexpected close encounter.

This is a place of close interaction, where both man and beast are used to each other and respect each other’s comfort zones. It is not uncommon to have a lion walk directly under your window or have a curious zebra poke its head in front of your windshield, but there is no aggression.

Mischievous packs of baboons roam everywhere, especially at the designated picnic areas where signs warn visitors to be on their guard or have their lunch stolen by these clever thieves.

These picnic areas are also usually full of lovable little Hyrax, the smallest member of the elephant family that are furry, and cuddly, the size of a large rodent, and totally docile. These cousins of the elephant make up for the fact that their larger relatives are the only member of the “Big Five” not found in the park.

Lions, zebra, giraffe, Cape buffalo, hartebeest, ostrich, gazelle, and even leopards roam free in great numbers. The Corey Bustard, one of the largest birds on earth still capable of flight while weighing as much as 20 kgs.( 44 pds.) is a common sight.

With plenty of food for all, most of these species intermingle creating photography heaven where you can often photograph several different species grazing together.

In this open savannah, the grasses grow tall so you must keep a sharp eye in order not to miss the pride of lions sleeping in the sun after making a mid-day kill. Their natural earth coloring blends in so well with their surroundings that you might be five feet from one and not see it until it moves.

Since the park is also on traditional grazing land you may come across a local Maasai in bright red shuka, (traditional robe) with a herd of cattle.

During July and August, in between heavy rains, countless wildebeest will enter the park via the Kitengela Migration Corridor on one of the longest annual known migrations on earth, between Kenya and Tanzania. They often travel with zebras in a unique symbiotic relationship.

Zebras have amazing eyesight and can spot predators far away while the nearsighted wildebeest is at a disadvantage from a swift predator. Not only are the zebras an early warning system but they also graze on the tall grasses, cutting them near the ground where the wildebeest prefer to graze on the short stalks.

Because of the proximity of the animals, other fascinating symbiotic relationships can be observed closely there.

The tiny gazelle is often prey for large cats so they graze near baboons that climb termite and anthills to watch for predators and screech a loud warning at their approach.

In turn, the baboons feed on the numerous gazelle still born calves that have a high mortality rate in the bush.

Finally, the oxpecker is a common bird that feeds on mites and other tiny irritants that infest most wild mammals in Africa. The oxpecker can almost always be found hitching a ride on a larger animal and when they fly at the approach of a predator, usually long before most other animals sense any danger, they are the best overall early warning system on the continent. Being able to closely observe species interaction is a highlight of this place.

The park is particularly proud o 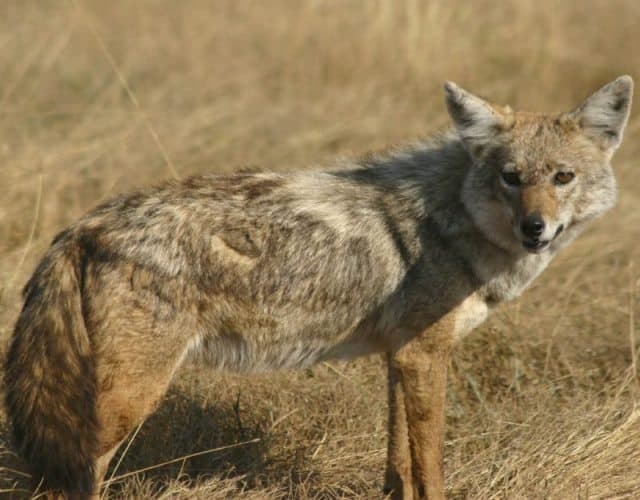 A golden jackal.f being a sanctuary for 60 of the last 600 Black Rhinos to be found in the world. They graze next to 11 of the more common White Rhino as living remnants of when dinosaurs roamed this land.

The Nairobi National Park is unique among the great cities of the world.

For families wishing to see wild animals in their natural habitat but for whom traditional safaris are beyond their time or budgets, nothing beats the Nairobi National Park. 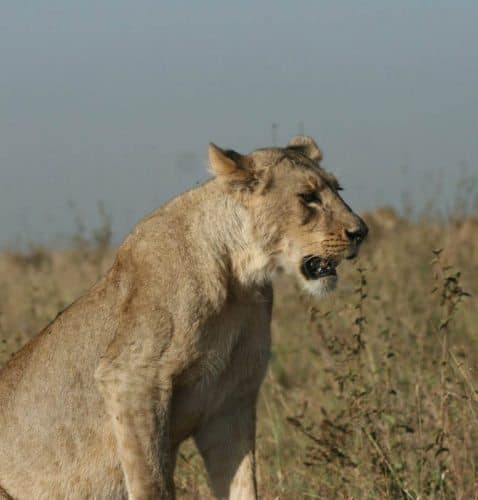 Nairobi National Game Park is located 8 kilometers outside of downtown Nairobi on Langata road in a rural area. City taxis regularly bring visitors out for the day and there are numerous local companies in Nairobi that will arrange an escorted drive through the park.