A Young Adult’s Trip to Kenya

For a 20-hour trip traveling couldn’t have been easier. A three-hour nap on the plane warded off any potential jet lag.

For all my flight preparations, none of it came in handy. I even had my attitude set to cautions foreigner. When offered a shorter Visa line, I turned a cold shoulder and clutched my bag. My host eased me to the shorter line.

My first view of Kenya was from driving down the wrong side of the road (they drive like the Brits here) and from the inside of a guarded concrete wall in a house that makes me feel like a rich 1940s British hunter (there might be a movie reference there). Tomorrow I will experience Nairobi.

I went on a walk around Nairobi with the intention of seeing my first monkey; I didn’t succeed. We did see beautiful gardens and open nurseries and fruit stands by the side of the road. Kenya’s soil is mineral-rich, allowing for easy and fast growth. Even though unexpected, Nairobi was lovely to see.

After returning from my walk, I saw my first uncaged monkey, actually monkeys. A total of seven blue samango monkeys swung in the trees on the property, played on the roof of the servants’ quarters, and took food from the servants’ hands. 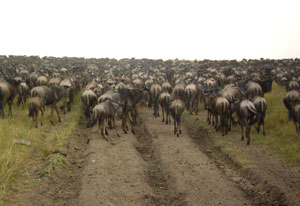 Wildebeest in the road

We went to a Nairobi grocery store and it left me waiting for my “African” experience to start. It wouldn’t have been difficult to convince me that we actually just traveled to Washington, D.C. We leave for safari tomorrow and I can’t imagine what that trip will bring.

View from the Car

The drive to the safari site was incredible. We passed through villages, towns and desolate areas. I got to see a new side of Kenya, the majority of Kenya, the slums.

About half of Kenya’s population is below the poverty line. Houses are made of corrugated aluminum, mud brick, or elephant dung. All the houses double as stores so people can sell their crops or goods to passers-by. 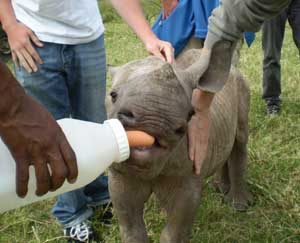 We went from the luxury of Lewa to the wilderness of the Abadares. It was definitely winter there. We stayed in a power-less isolated (except for the animals and one man with a gun) fishing cabin.

The drive to the lodge took two hours longer than expected and we were driving through the rainforest and up a mountain on wet dirt roads in the dark. There were plenty of mishaps including a buffalo blocking our way. 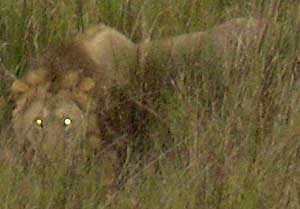 We did an 8.5 mile trail hike to a waterfall only to see a second of a waterfall and lots of fog.
Then we decided to drive and saw a baby buffalo. Another buffalo got in between us before I could grab a picture. Then we went to an amazing waterfall that made up for the mist. After two days in the mountains, we headed to the Masi Mara to witness the Wildebeest migration.

I laid in bed listening to the wildebeest, bugs, hippos, and lions. Hippos sound like fat men laughing. We stayed in a mobile camp that was set up to follow the migration. Wildebeests look like frail old men and sound like bullfrogs. 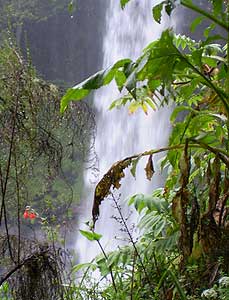 A waterfall in the rainforest.

We saw some other animals, including getting really close to a handful of elephants as we entered the camp. We were the only ones at the camp; us, the Maasai guides, and the adventure-junkie British owner. This is the most exciting place we’ve been.

One morning we watched two lions take down and kill a Wildebeest. It took them less than five seconds to snap its neck. The male loudly ate (crunch crunch) about 25 feet from us while the lioness continued to hunt. Eventually she left, scarred off by a hippo. The background of the kill was a Kenyan sunrise. It sounds gross but it was kind of awesome.

The Mara easily tops Lewa in number of animals and adventure. We were circled in our safari car by three hyenas who called to each other.

They call by putting their heads to the ground and making deep groans. We watched vultures pick clean a Wildebeest skeleton. Looking out on all the animals, I felt like we were the lowest weakest ones.

Susan (my aunt) was a few feet away from an eight-foot spitting cobra that was ready to attack. 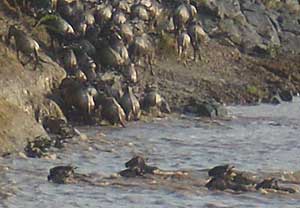 She was sitting on the porch of our safari tent and innocently reading when she heard a noise, looked to her left, and saw a black cobra coiled up and mouth open about two feet away from her face.

She ran one way and the cobra slithered the other way. They swear incidents like that never happen but the Masi looked as uneasy as we felt.

We left the camp at 6:00 am to see the Wildebeest cross the Mara River. At the crossing, we saw over 1,000 wildebeest and handful of confused zebras (scared zebras sound like yippy little dogs) cross the river. About ten wildebeest didn’t make it across.

It is dangerous for them to cross because the current is strong, the river bank is steep, and the crocodiles eat daily. We saw some well-fed crocs and many Wildebeest carcasses, proof of cat killings. 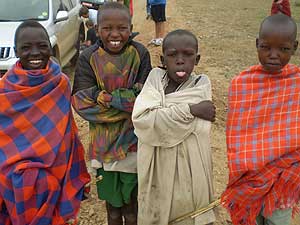 After returning from the Mara I walked around their neighborhood in Nairobi. It is such an interesting place. The houses are huge and beautiful but they are blocked by walls and tall bushes. There are no sidewalks; I walked on dirt.

The next day (our last in Kenya) we went to a market in the city. Each vendor has their own stand and they sell everything there (fruit, jewelry, rugs, everything).

The key is to bargain but as good a bargainer as I am, I can’t compete with someone who does it for a living. Either way, everything was cheap and the vendors were fun.

On the day we left, we woke up at 5:30 in the morning to pack up our stuff and get to the airport. We had a long day of flying ahead of us to end our vacation. We were only in Kenya for twelve days but it felt like months. Each safari and trip to Nairobi were so unique that they felt like separate vacations.

Jenna Kellam is a recent college graduate who currently resides in her hometown of Baltimore.