Enchanted or Haunted? The Mysteries of the Island of Lanai

The locals call it “the feels.” Foreboding apprehensions and strange occurrences that happen on Lanai—the most 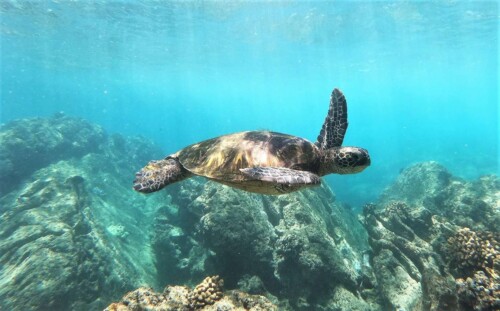 mysterious and one of the least populated of the Hawaiian Isles.

Lanai is unique in that 98 percent of its land is owned by billionaire Larry Ellison, who bought it in 2012.

He is reportedly planning on spending $340 million on the development of a ‘wellness retreat.” He owns the Four Seasons and another hotel here too.

Once known as Hawaii’s Pineapple Island (though pineapple hasn’t been grown here for years), Lanai is only nine miles offshore from Maui.

On a Maui vacation, my hubby and I decided it was time we checked Lanai off our Hawaiian Islands to-do list.

To be honest, we had no prior knowledge on the day of our visit that the island is reportedly haunted.

But we experienced enough bizarre happenings that day leading us to ask a whole lot of questions.

And the answers inspired us to do even more digging into the island’s peculiar history.

Our journey began after boarding an Expeditions ferry out of Lahaina, Maui for a short voyage to the island. Only 13 miles wide and 18 miles long, Lanai is best explored by vehicle.

With a rented Jeep 4×4, we were confident we could safely navigate the remote parts of the island as Lanai has only 30 miles of paved roads.

Map in hand, a travel plan in place, gas tank full, and some words of caution from the rental company, we headed off to Lanai’s Shipwreck Beach.

We were surprised by the extensive wide-open wilderness and completely empty roads for miles.

Suddenly our gas gauge began to wildly fluctuate from full to less-than ¼ full.

Reasonably confident the tank was full when we left the rental company, we continued on, albeit with some trepidation. And of course, there was no cell phone service if we ran into trouble

Shipwreck Beach in Kaiolohia is a windy 8-mile stretch of oceanfront on Lanai’s northern shore.

Signs warned us not to drive on the sand near the beach once it begins to “feel soft.”

What does that mean? Apparently, many drivers have succumbed to sinking sands here, waiting hours for towing services from the far end of the island.

We listened to the advice, and did just fine, even if it required walking a few hundred yards to the beach.

Shipwreck Beach is aptly named for the numerous vessels wrecked along its shallow, rocky channel. It’s a bold testament to the island’s reputation as an unsafe harbor in a storm.

As we climbed over the rocks for a better view, hundreds of black crabs came out of nowhere, scurrying around us menacingly. Ultimately, they were harmless, but the unexpected encounter was quite unsettling.

Located near Shipwreck Beach, the Puaiwa Petroglyphs are popularly referred to as the “Bird Man of Lanai.”

Preserved by isolation and time, these primitive renderings painstakingly carved into rock depict scenes in ancient Hawaiian culture— surfing, hunting, and fishing activities along with sketches of men, women, children, and animals.

Bizarrely, some of the 12-inch-tall stick figures are depicted with bird-like heads.

Archeologists are baffled as no one really knows the origin of these figures. Were they the result of sacred ritual practices, or a means of recording family genealogy?

Curiously, petroglyphs are not mentioned in Hawaiian chants or myths handed down through generations.

This was a place we wanted to see as the original lodge and its coastal sister property, the luxurious Four Seasons Resort was built in an effort to lure guests to an island that was for many years practically ignored.

Previously known as the Lodge at Koele, the resort which opened in 1990 underwent a recent major renovation and just reopened as a wellness resort, the Sensei Lānaʻi.

Situated inland in the cool and misty highlands, this was once a retreat for the true outdoorsman.

Guests could indulge in horseback riding, tennis, archery, hunting, and even a clay shooting range.

Nestled among lush greenery and pines, and backed by a thick misty forest, the estate resembled a grand country hunting-lodge featuring spectacular gardens and fountains.

Though the lodge was beautiful, its English gardens magnificent, there was an eerie feel to the property.

Guests both inside and outside spoke in hushed tones or didn’t speak at all. It was so strikingly quiet; we didn’t even hear the sound of birds.

There was an uncomfortable, almost ominous presence that permeated the resort and its surrounding property. And then a fog rolled in.

We decided it was time for lunch.

Following an islander’s recommendation, we headed to Lanai City, the small geographic and cultural center of the island, the locals call “central town.” Indeed, it’s really Lanai’s one and only town.

The real treat was listening to happy smiling villagers congregated on the sunny porch “talking story.”

It’s a pidgin phrase used by Hawaiians to describe the sharing of local gossip, history, news, and opinions in a storytelling fashion.

Listening in on their conversation was utterly fascinating. Apparently, woodland ghosts and the unusual happenings at the historic Hotel Lanai in town had been occurring.

At this point, we had to share our strange experiences and ask the question. “Is Lanai haunted?”

The locals glanced darkly at one another before one replied “We believe it is. There is a long history of many strange “dis-n-dat” happenings here.”

Then the information began to flow. And we got to see the island through the eyes of its native inhabitants.

Located on the eastern shore of Lanai, Keomoku was a sleepy fishing village until the late 1800s, when the Maunalei Sugar Company arrived, turning the quaint village into a bustling sugar plantation town.

In its heyday, the town grew to over 2,000 residents and was the first non-Hawaiian settlement on Lanai.

Approximately 500 workers were brought in to work the fields. Additional housing, a pier, a hospital, various stores, and a railroad were constructed to accommodate the sugar industry.

However, it didn’t last long. In 1900, the Black Plague that began in Honolulu hit the local village.

Many workers died, and when the freshwater sources irrigating the fields turned brackish, the sugar company was forced to shut down its operations in 1901.

Local legend has it, that the sugar company built their railroad near a local temple and damaged heiaus (ancient Hawaiian sites). This reportedly angered the gods, causing water issues and an epidemic.

Pineapple plants once covered nearly 20,000 acres of Lanai—with the most famous, Dole Plantation operating from 1922 to 1992. Today, hardly a pineapple plant can be found on the island.

The simple truth is that every agricultural enterprise on this cursed island has failed for whatever reason—sugar, pineapple, and even cattle ranching.

As the “talk story” with the locals continued, we learned that according to Hawaiian lore, Keahiakawelo’s windswept features are the result of a contest between two kahuna priests—one living on Lanai, the other on nearby Molokai.

They challenged one another to see who could keep a fire burning the longest. The kahuna from Lanai won, but used up every piece of vegetation in the process, causing the barren moon-like terrain we see today.

Kanoa, the oldest Hawaiian in the group now piped in. “That