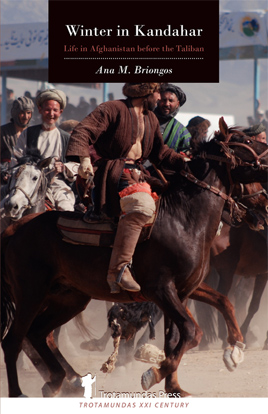 Ana M. Briongos began her adventure in 1968, as a 21-year-old on a quest for self-discovery. When I asked her what made her leave her native city of Barcelona and venture into an unknown land, Kandahar Afghanistan, here’s what she said:

“I fled from the tedium; from mass with my family on Sunday and the daily rosary, a family absorbed in dark quarrels that were not very exemplary; from the exams of my third year in the faculty of physics; from my ephemeral militancy in a Stalinist party; and finally, from what today we call “la escopeta nacional” [escopeta means musket or shotgun] from the title of a very popular Spanish film concerning the dark deep traditional Spanish society in Franco’s time.”

“I wanted to go away, to see, to forget, to clean, to open, to fill, to observe, to feel, and also to love. I was young, healthy, and I felt strong.”

Her first stop was Afghanistan where she stayed with Afghan families, built life-long friendships and even managed an Air France office on her own.

Her book Winter in Kandahar is a personal account of her life in Afghanistan before the Soviet invasion and the subsequent Taliban victory that led to the downfall of the monarchy. She offers us an exclusive peek into the lives of the people of Afghanistan, from vendors to members of the royal family.

Taking advantage of her privileged position as an insider, she observes the life of women in Afghan society and writes about her experiences, sometimes with a touch of humor.

Recipient of the 2009 Award for the Best Travel Book in English at the 11th Annual International Latino Book Awards in New York during Book Expo America, Ana M. Briongos now lives in Barcelona and spends her time writing, traveling and giving conferences about the countries she knows best — Iran, Afghanistan and India. Details about her travels and her books can be found at www.ana-briongos.net

He was astonishingly attractive… not exactly a good person but not a bad person either… and he was driven and deeply ambitious. His name was Pierre Descombes and he had travelled to Kabul from his birthplace in Lyon with little more than a bundle of possessions in the back of the car (a washed-out red 4L engine) and a few savings. When I met him, he was twenty-three and had been travelling around the country before choosing to settle there.

He was determined not to leave until he had made his fortune.
He entered Air France’s only office in Kabul and sat down in front of my desk, dazzling me with his white suit and Vuarnet mirror sunglasses. His close-cropped hair had recently been washed and combed and tufts of it, still bearing comb marks, were sticking up.

He was the first member of the public to enter that office since Sidiq had left me in charge four or five days previously.

Each morning, I walked from Shahr-i-Nao (The New City) to the French airline’s office at the Spinzar Hotel, arriving by nine o’clock. The bacha, who was permanently perched on his rickety stool by the door, would greet me on my arrival.

As soon as he saw me coming round the corner, he would stand up, place his right hand on his chest, bow and greet me with a salam aleikom. He would then let me in, opening first the screen door, then the glass door. His shiny, kohl-rimmed eyes were the colour of honey.

The bacha for Kabul’s Air France office was tall, thin, bony and limber. He wore brown baggy trousers, a shirt of the same colour with skirts nearly down to his knees and a threadbare army jacket with no stripes or insignias, most likely to have been bought in the big second-hand clothes market which sold clothes from Western countries and the U.S.S.R.

Not long afterwards, from the same market, I paid four afghanis for a white, ermine-lined velvet coat, with a label on the inside bearing the name of the tsarina who had been assassinated fifty years before. Two stick-thin legs protruded from the bottom of the bacha’s baggy trousers and on his enormous, bare feet were a pair of worn-out leather sandals.

His head was swathed in a big, pastel-pink turban, made from a piece of cloth that was several yards long, with one end dangling next to his cheek, past his shoulder and halfway down his chest where it lay against the old jacket. From my desk in the office, I would look out through the screen door and see the bacha unravelling and retying his brightly coloured turban three or four times a day.

He started with one end at the front, winding it with one hand while the other hand, which was free, secured the cloth, making sure it fitted properly round an inner cap which was embroidered with tiny, coloured, glass beads. By the time he had finished, the cap was buried under yards of cloth. I never knew whether he slept in the office at night, whether he lay down next to the screen door, or even if he had a family in a shack in some outlying district on the craggy slopes around Kabul.

The bacha would be sitting on his stool when I arrived and would still be there after I left. His sole occupation was to greet me, open the door for me, offer me tea several times throughout the so-called working day and readjust his turban. There was nothing for me to do either, except sit by the window all day. Well, actually, I was doing something: I was looking.

I spent hours watching passers-by milling about on the other side of the glass. It was an old-fashioned world, devoid of any bright colours and dominated by earth colours, from pink to ochre, with a touch of sky-blue here and there.

View from the Window

Air France was the first premises on the right before you reached the Spinzar Hotel, one of the most luxurious hotels in Kabul. The front of the building consisted of a large, floor-to-ceiling, glass display window facing the avenue which, further on, led to the bridge over Kabul River. My desk opposite the window afforded me a panoramic view of the street.

I could watch the continual comings and goings of men dressed in Afghan clothes: baggy trousers, long-skirted shirts, waistcoats and turbans. Every now and then, a veiled woman drifted by like a ghost. On the corner across the street, a shoemaker squatted down as he mended old shoes.

In the mornings, I would see women crouching down in front of him and producing several shoes from under their burkha for him to repair. Without showing their face or any part of their body, except their hands, the veiled women passed the time chatting to the shoemaker.

No one knew who they were, not even their own husbands, fathers and brothers. They groped their way along the street, barely able to see a thing through the embroidered mesh in front of their eyes. They travelled alone or in groups through the bazaar and streets but rarely did I see any women pass in front of the Air France window. In Afghanistan, the population is calculated according to the number of men. Women and children do not count.

“Good day, mademoiselle,” said this film character in French, his glasses reflecting my own image back at me. “I’ve come to buy a ticket for Paris. I need to leave the country this week.”

What a nightmare! Sidiq had promised me that no one would come into the Air France office and had gone off to the mountains without telling me if the airline would even be sending a plane to Kabul. I could not even print plane tickets or offer any kind of useful service to potential customers. That is how Afghanistan was in 1969.

I explained to him, again in French, that I was only there on a temporary basis and that as the office was currently undergoing refurbishment, we could not be of much help to him. I advised him that if he wanted to travel he should go instead to Ariana, the state airline.

This is what we would be advising all our customers. Finding myself in the awkward position of having to lie, I stumbled over my explanation. During the few seconds’ silence that followed, I cursed Sidiq and also myself for having agreed to run the office of a major European airline.

Here it was, open to the public, in the middle of Kabul, in one of the best hotels in the city, with a bacha on the door. All of this without even knowing if there were going to be any Air France planes arriving at Kabul airport. All Sidiq had taught me before he disappeared was how to write coded telegrams in response to other coded telegrams, if they came. The bacha would take care of them; he knew where to send them.

[Winter in Kandahar is published by Trotamundas Press, an international publisher specializing in travel literature written by women travelers from different countries and cultures.

Note: There’s another book, a novel, with the same title “Winter in Kandahar” written by another author, and that’s why the emphasis on the sub-title “Life in Afghanistan before the Taliban”.]

Order this book from Amazon.com:

Winter in Kandahar: Life in Afghanistan before the Taliban

Esha Samajpati is a former advertising consultant who loves to travel and write. She authors a blog on advertising trends called The Business of Advertising and a travel blog called Miles to Go.