Afghanistan as a Tourist. Really.

Most people are hesitant to travel to the war-torn country of Afghanistan due to safety concerns (which are undeniably justified), a limited amount of tourism coverage, and thanks to the media, the portrayal of a country infatuated with terrorism and anti-Americanism.

But as the saying goes, never judge a book by its cover.

This summer, I had the chance to travel to Afghanistan with my family after five years.

Although I’ve been before (in 1994 and 2008), this time was very different as not only was I older and wiser, but I also had developed the ability to appreciate the simple things a country has to offer.

Plain and simple, hospitality in Afghanistan is unlike elsewhere I’ve been. It’s practically unheard of to go to someone’s house, whether it is a relative, family friend, or a newly encountered stranger, and leave without having at least several cups of tea, fruits, and often, a meal.

In Afghan terms, a typical meal consists of two types of rice, two meat dishes, a vegetarian dish, and salad. It’s gratifying to see that people who have encountered over thirty years of war can still offer such compassion and kindness.

AfQargha Lake from the Spojmai Hotel in Paghman Afghanistan.After spending two weeks in beautiful Herat City, we decided to spend a couple of days in Kabul before heading home to Toronto.

While Kabul’s famous attractions such as Gardens of Babur Shah, Darulaman Palace, and the Tomb of Nadir Shah gave us insight on Afghanistan’s unique history, sightseeing in long-sleeved jackets and headscarves in the hot summer sun was, the least to say, unbearable.

So, my uncle suggested that we go to Paghman, a town near the hills of Kabul with a population of 120 000 residents, also known as Kabul’s “cottage country.”

While only a mere 20 minutes west of Kabul, the cool fresh air makes you feel like you’ve left Afghanistan and have entered a whole new country.

On hot summer weekends, Kabulis flock to the town, eager to find a “takht” (a bed frame supported with posts with cushions placed atop) right by the cold water springs, which leads to the only river in Kabul, Kabul River.

While we were there, it even started to rain, something that rarely occurs in the summertime in Afghanistan.

Due to the conservative nature of Afghanistan, and especially in Paghman, where the majority of the population are Pashtuns, the “takhts” have curtains that you can close to allow families with female members to be comfortable.

As a Canadian female, I didn’t like this arrangement and argued that since I had a headscarf on, I should not have to shield myself.

A few minutes later, I decided to close the curtains after being continuously stared at by a group of men sitting in the takht across from us. My uncle gave me an “I told you so” look.

The History of Paghman, Afghanistan

Paghman is a special place in Afghanistan for many reasons. For one, it is known as Kabul’s cottage country where prior to the 1979 Soviet war, rich Kabulis owned “summer” homes in the town and employed servants and maids. Others who could not afford a summer home went up for the day with their families for picnics and relaxation.

Paghman also plays a significant historic role in Afghanistan’s modern years. After King Amanullah, who was also born in Paghman, returned from his 1928 tour in Europe, India, and Iran, he brought foreign architects to “modernize” Kabul.

The Arc was destroyed over the years due to fighting but has now been restored as part of Afghanistan’s recent reconstruction efforts.

While toot is enjoyed across most of Afghanistan, Paghman is different in that its toot season is a bit later than other provinces. When we were in Herat City, we had just missed toot season so we were ecstatic to get a second chance in Paghman.

At the end of the long gravel road that led right into Paghman, I noticed a restaurant, if you can even call it that. It looked more like a shack with meat hanging on hooks.

I looked around and noticed this was the only restaurant in the area. I had no idea what we were going to eat for lunch, although I soon realized when I smelled the aroma of seasoned lamb kabobs and freshly baked Afghan ‘naan’ or flatbread.

My uncle walked over to the restaurant owner and ordered a platter of lamb kabobs.

“No problem”, said the restaurant owner. My uncle followed him in the back where they grabbed a lamb, slaughtered it, cleaned it, chopped it, and grilled it. How’s that for fresh food?

In less than an hour, the waiter brought us a platter full of lamb kabobs seasoned perfectly with salt, black pepper, garlic, and a bit of turmeric. To eat the kabob, you place it in between a piece of ‘naan’, sprinkle it with some sumac and Afghan chutney: a delicious and spicy mix of coriander, salt, pepper, crushed walnuts, and hot pepper.

For drinks, we drank “dogh”, a traditional Afghan yogurt drink that puts you right to sleep. Needless to say, this was by far my favorite lunch of the entire trip in Kabul.

Sitting there surrounded by mountains and hearing the soothing sound of the springs, you almost forget you’re in Afghanistan until you notice a group of armed guards following a tribal leader to a takht right next to yours and reality hits again.

The road to Paghman from Kabul offers you spectacular views of Kabul’s largest reservoir and lake, Qargha Lake. Just five miles outside of Kabul, the sparkling blue water is a striking contrast to the dull brown mountains surrounding it, and the sight just completely transforms the capital.

Qargha Lake, similar to Paghman, is a place for Kabuli families to relax and for their children to enjoy boating, swimming and cotton candy. Families can enjoy delicious meals at the Spojmai Hotel and Restaurant located on the banks of Lake Qargha.

We decided to stop there on the way back to Kabul from Paghman to enjoy some sweets and tea. My uncle decided to tell me only after we had been seated on the patio that this restaurant was attacked by the Taliban just one year ago. It was definitely something I didn’t need to know.

The restaurant has two dining areas and a large patio that overlooks the water. One dining area is reserved for men and the other reserved for families. I noticed a group of women enjoying tea at a table with their headscarves around their necks. It was a stark contrast to conservative Herat City where wearing a long Iranian-style chador is the norm.

Sitting there with my cup of tea in one hand, and my camera in the other, I couldn’t help but notice the families around me. Full of laughter, they looked like they were having the time of their lives.

It was hard to believe that they could be so calm and relaxed in a setting where, just a year ago, had been a Taliban target. That day, I saw a side of Afghanistan I only wish more people have the chance to see. One filled with hope, optimism, and joy. 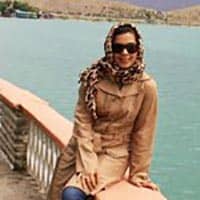 Jassamine Tabibi’s passion for traveling started after visiting Margarita Island in Venezuela, leading her to visit places in Europe, the Middle East, and South Asia. She likes to write about her travel experiences to uncommon destinations and sharing the beauty of war-torn countries, such as her native Afghanistan. She speaks English, French, and Persian and lives in London, Ontario, Canada.