Bicycle Diaries: Seeing the World from the Saddle

David Byrne is a musical innovator who was the catalyst behind the Talking Heads, one of the most influential bands of the ’70s and ’80s. He has collaborated with musicians from around the world, and in this new book, he provides succinct commentary on the state of the world learned from his many travels on the saddle of a bike.

This book has a wonderful flow; he easily moves from Buenos Aires to Manila, to New York, observing things like how buildings look and what local musicians are saying, and the pace is rapid, like a bike ride. Here is Byrne’s opening to the book, setting out his agenda to transform cities that are bike-unfriendly to something a little more civilized.

I’ve been riding a bicycle as my principal means of transportation in New York since the early 1980s. I tentatively first gave it a try, and it felt good even here in New York. I felt energized and liberated.

I had an old three-speed leftover from my childhood in the Baltimore suburbs, and for New York City that’s pretty much all you need.

My life at that time was more or less restricted to downtown Manhattan—the East Village and SoHo—and it soon became apparent to me that biking was an easy way to run errands in the daytime or efficiently hit a few clubs, art openings, or nightspots in the evening without searching for a cab or the nearest subway.

I know, one doesn’t usually think of nightclubbing and bike riding as being soul mates, but there is so much to see and hear in New York, and I discovered that zipping from one place to another by bike was amazingly fast and efficient.

So I stuck with it, despite the aura of uncoolness and the danger, as there weren’t many people riding in the city back then.

Car drivers at that time weren’t expecting to share the road with cyclists, so they would cut you off or squeeze you into parked cars even more than they do now. As I got a little older I also may have felt that cycling was a convenient way of getting some exercise, but at first I wasn’t thinking of that. It just felt good to cruise down the dirty potholed streets. It was exhilarating. 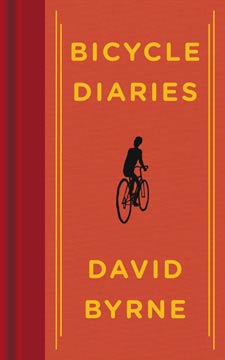 By the late ’80s I’d discovered folding bikes, and as my work and curiosity took me to various parts of the world, I usually took one along. That same sense of liberation I experienced in New York recurred as I pedaled around many of the world’s principal cities.

I felt more connected to the life on the streets than I would have inside a car or in some form of public transport: I could stop whenever I wanted to; it was often (very often) faster than a car or taxi for getting from point A to point B; and I didn’t have to follow any set route.

The same exhilaration, as the air and street life whizzed by, happened again in each town. It was, for me, addictive.

Faster than a walk, Slower than a Train

This point of view—faster than a walk, slower than a train, often slightly higher than a person—became my panoramic window on much of the world over the last thirty years—and it still is. It’s a big window and it looks out on a mainly urban landscape. (I’m not a racer or sports cyclist.)

Through this window, I catch glimpses of the mind of my fellow man, as expressed in the cities he lives in. Cities, it occurred to me, are physical manifestations of our deepest beliefs and our often unconscious thoughts, not so much as individuals, but as the social animals, we are. A cognitive scientist need only look at what we have made—the hives we have created—to know what we think and what we believe to be important, as well as how we structure those thoughts and beliefs.

It’s all there, in plain view, right out in the open; you don’t need CAT scans and cultural anthropologists to show you what’s going on inside the human mind; its inner workings are manifested in three dimensions, all around us. Our values and hopes are sometimes awfully embarrassingly easy to read.

They’re right there—in the storefronts, museums, temples, shops, and office buildings and in how these structures interrelate or sometimes don’t. They say, in their unique visual language, “This is what we think matters, this is how we live and how we play.”

Riding a bike through all this is like navigating the collective neural pathways of some vast global mind. It really is a trip inside the collective psyche of a compacted group of people. A Fantastic Voyage, but without the cheesy special effects.

One can sense the collective brain—happy, cruel, deceitful, and generous—at work and at play. Endless variations on familiar themes repeat and recur: triumphant or melancholic, hopeful or resigned, the permutations keep unfolding and multiplying.

Yes, in most of these cities I was usually just passing through. And one might say that what I could see would therefore by definition be shallow, limited, and particular. That’s true, and many of the things I’ve written about cities might be viewed as a kind of self-examination, with the city functioning as a mirror.

But I also believe that a visitor staying briefly can read the details, the specifics made visible, and then the larger picture and the city’s hidden agendas emerge almost by themselves. Economics is revealed in shop fronts and history in door frames. Oddly, as the microscope moves in for a closer look, the perspective widens at the same time.

Each chapter in this book focuses on a particular city, though there are many more I could have included. Not surprisingly, different cites have their own unique faces and ways of expressing what they feel is important. Sometimes one’s questions and trains of thought almost seem predetermined by each urban landscape.

So, for example, some chapters ended up focusing more on history in the urban landscape while others look at music or art—each depending on the particular city.

Naturally, some cities are more accommodating to a cyclist than others. Not just geographically or because of the climate, though that makes a difference, because of the kinds of behavior that are encouraged and the way some cities are organized, or not organized. Surprisingly, the least accommodating are sometimes the most interesting. Rome, for example, is amazing on a bike.

The car traffic in central Italian cities is notoriously snarled, so one can make good time on a bike, and, if the famous hills in that town are avoided, one can glide from one amazing vista to the next.

It’s not a bike-friendly city by any means—the every-man-for-himself vibe hasn’t encouraged the creation of secure bike lanes in these big towns—but if one accepts that reality, at least temporarily, and is careful, the experience is something to be recommended.