Vietnam: See the Country on a Bicycle

Experience the splendor of the country from a bicycle

Forget planes, trains, or automobiles–bicycling is one of the best ways to see an unfamiliar country.

And where better than Vietnam? Despite a rich history, pristine beaches, and delicious food, portions of the country are virtually untouched by tourism and retain strong customs and a more traditional way of life.

From the fast pace of Hanoi to the charming ancient town of Hoi An, there is something for everyone–and on the saddle, zipping down streets and through villages, cyclers have the best views.

“The diversity of culture, gastronomy, and topography makes Vietnam a great place to run tours to suit all levels,” says Dylan Reynolds, of Ride and Seek Tours. “Whilst very much ‘discovered’ in terms of the major tourist spots there is also plenty of opportunities to get off the beaten track which is great.”

Off the Beaten Track


Bob Thompson has been leading bicycle tours through Southeastern Asia since 2002 through his company, Far and Away Cycling.

After Thompson noticed that many cyclers were signing up for both his Laos and Vietnam tour, he combined the two to create the “Tour d’Indochine,” which recreates a country that disappeared off the map over 50 years ago.

At 18 nights, and spanning 500 miles, it’s the longest tour offered through his company, and not for the faint of heart (or endurance).

The tour starts in Hanoi, which is considered to be the “Paris of Southeast Asia.” From there, cyclers take an overnight train to Lao Cai, close to the Chinese border, before heading to Sapa, in North Vietnam.

Riders bike and kayak through Laos, and spend a night staying with a Laotian family, which is considered to be a “highlight” among travelers.
Thompson’s tours are small–no more than 12 people attend each trip–and very intimate. According to Thompson, this allows them to “modify [the trip] on the fly,” and leads to bonding–many cyclers leave the trip having made friends with the other travelers.

Joan Oppel, who traveled to Vietnam in 2008, described the tour as “an exciting, challenging, immersive experience.”

“Everything was a new engaging experience, and especially in the mountains, the scenery was gorgeous – I could never fill my eyes with enough of it. The people were also beautiful, industrious, hard working, with charming smiles,” she said. “Youngsters always seemed interested in having their picture taken and sometimes gathered in crowds when I stopped. And young boys took particular delight in running alongside my bike.

Sometimes, when I rode up beside a boy or two on their own bikes, I would gesture “come along”, they would race with me – all of us laughing.”

This was my first trip to Asia,” Oppel added.

“Vietnam is becoming more westernized but the rural areas retained a lot of their local culture and it is best experienced close up on a bike. I loved every minute of the cycling – hills, flats, water buffalos blocking the road, torn-up roads, charming kids, scenery out of a painting.”

“If you want to see the world, do it on your bike.”

Sydney, Australia-based company Ride and Seek Tours pride themselves on providing “epic adventures in the footsteps of historical figures.” And for riders looking for an “epic” challenge, Ride and Seek’s Vietnam–Untouched tour provides an adventurous and far-flung experience.

The area is virtually untouched by tourism, and is described as “detached and frozen in the past.” 22 different ethnic minorities call the region home, making up 90 percent of the population.

Like Thompson’s tour, Vietnam–Untouched is no walk (or ride) in the park. Cyclers ride 100-160 km per day and “cycle into the clouds.”

After starting in Hanoi, riders tour the countryside, stopping in Tam Son, Meo Vac, Nghia Lo, Tan Uyen, before finishing the trip off in Sapa. And while the elevation may be tough, but the picturesque rice paddies and forest views make the climb worth it.

Reynolds states that the Untouched tour “really gets you away” from the “tourist infastructure.”

“You get the sense that the locals you meet have never seen fancy road bikes before, let alone tourists dressed in lycra,” Reynolds says.

Intense bike rides and high altitudes not your cup of tea? Ride and Seek’s also offers a Coastal Bike Tour, which offers a more relaxing pace. This tour is designed in particular with families in mind, as it provides two itineraries–one for riders, and one for non-riders, and is described as “geared as much to the cycling as it is to relaxing and exploring the local environment.”

During the seven day, six night trip, the tour calls Huế, the old imperial capital, and Hội An, a beautiful city with an ancient town on the water, home.

Each morning, Cyclers can take a 70-100 km ride, and be back to the hotel in time for lunch. During the afternoons, vacationers are welcome to relax on the beach, walk the historic streets of cities Hoi An and Hue, or explore national parks.

“This tour appeals to avid riders and their non-cyclist family members,” said Sam Wood, co-founder of Ride & Seek. “In addition to offering an exciting program for cyclists, we have a full itinerary of activities for the rest of the family.”

Whether you are looking for a fast-paced, adventurous climb through the countryside or a relaxed ride on the coast, bicycle tours offer the best way to see Vietnam and all its splendor. 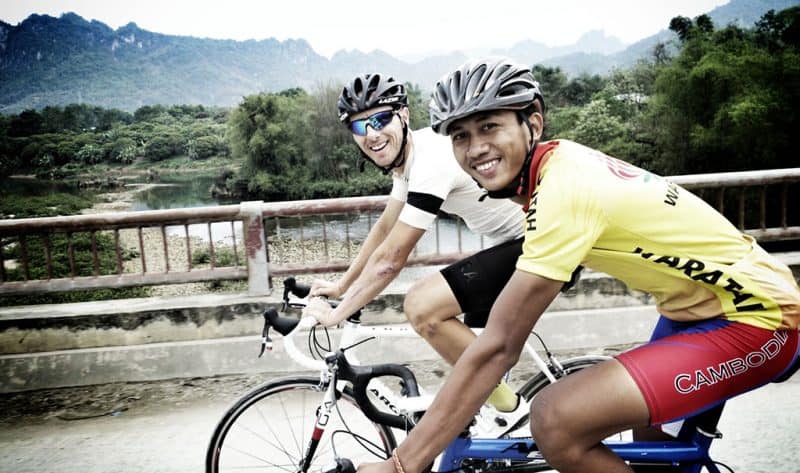 ‘Not easy, but interesting’

For Thompson, who rides on each tour, the program is a “labor of love. It’s not easy, but it is interesting,” he commented.

“If you’re interested in seeing a country, bicycle is the way to do it…you can see a lot more things.”