Summersville, WVA’s Secrets: Once Known Only to Climbers

Summersville Lake, West Virginia is somewhat of a secret.  At least to outsiders.  Drive a winding, carsick, few hours east of Charleston and you can find it buried between the endless broccoli-topped green of Appalachia.

Summersville is like most fading mountain towns there – gas stations and fast food.  A nowhere.  The lake the town sits on, however; is another thing entirely.

A Portal to Thailand

Like a portal to Thailand had been stitched into the very center of West Virginia, Summersville Lake is a dirtbag’s fever dream… especially if you climb.

Sixty miles of climbable shoreline snakes through the mountains.  Almost two hundred routes.  To see it on a map, it is all blue tentacles racing through the trees.  In person, it’s an unconquerable playground.

Rafting the Gauley River in Summersville

Summersville Lake is part of the same Gorge as the Gauley River, a rafting mecca legendary for its whitewater.  But, if you’re not part of the whitewater community, you probably haven’t heard of it.  A lot of the appeal of West Virginia might be described that way – unheard of.

People have often believed I was describing the western side of the state of Virginia, revealing their lack of knowledge on both the civil war and basic geography.

“Oh nice, I have family in Roanoke,” they would say.

Without moonshine legends or John Denver’s karaoke classic, “Country Roads,” West Virginia’s placeholding in the cultural zeitgeist is almost zilch.  West Virginia’s best is overlooked, and in many ways, still a secret.

But I knew the secret.  I had befriended climbers in Charleston who told me about an overlooked crag entrance to the lake called Whippoorwill, and more specifically a free camping site on the gulley side of Summersville’s dam.  A local spot.

Whispering as they glanced over their shoulders, they mapped it out on their palms.  After all, what is the point of having a secret spot if you can’t brag to strangers about how perfect that secret spot is?

It is a bit of a secret though; can I not tell anyone?  Of course not, I said.  Who would I tell?

The next weekend we were on our way up through the hills, up to Summersville Lake – me and two buddies from university, Stodd and Mike.  We showed up to Summersville with board shorts, a tent, and two plastic bags of food from Piggly Wiggly.

Up over the dam. Took a left down into the gully.  Turned right onto a dirt road that hugs the edge of the riverbed.  Arrived.

Camping there below the dam during the summer meant picking through leftover spots – the mud flooded spot, the one that doesn’t have any flat ground, or the one with the broken picnic table and poison ivy.  The best campsites were already taken by in-the-know locals. Fishermen mostly.

We drove past a waxed-canvas shelter with a wood-burning stove chugging inside, past an old hunting trailer with an open door and the tv on, past wood piles designating property lines.

Staring at the Outsiders in Summersville

“It’s the freakin’ weekend…” R. Kelly remixed, too loudly, from the inside of my truck.  We nodded as we drove by.  A few men, on haunches scaling a trout, stopped.

Some stood up from behind their fires as we passed.  All of them stared as we unloaded our gear in unbuttoned Hawaiian shirts and swim shorts.  Mike had on a straw fedora.

“Howdy,” said Stodd, smiling.  In hindsight, he should not have waved.  The men next to us said nothing, still staring.  The closest shirtless local sniffed and spit into the fire.

Late that first night, we were sitting around our campfire when a group of sixty-somethings arrived a space down.  They were struggling to set up their tent in the dark, loud as children.

Two of them bumbled around with the poles, while one lady in a wheelchair flicked a flashlight aimlessly across the trees, barking orders.  Their laughing and cursing echoed around the black canyon.

“You look like you could use some help,” Mike said, joining them at their campsite with  Stodd and I in tow.

They nodded together silently, the light of the single flashlight drooping.  Their tent was enormous.  The elderly group’s leader, the lady in the wheelchair, piped up. 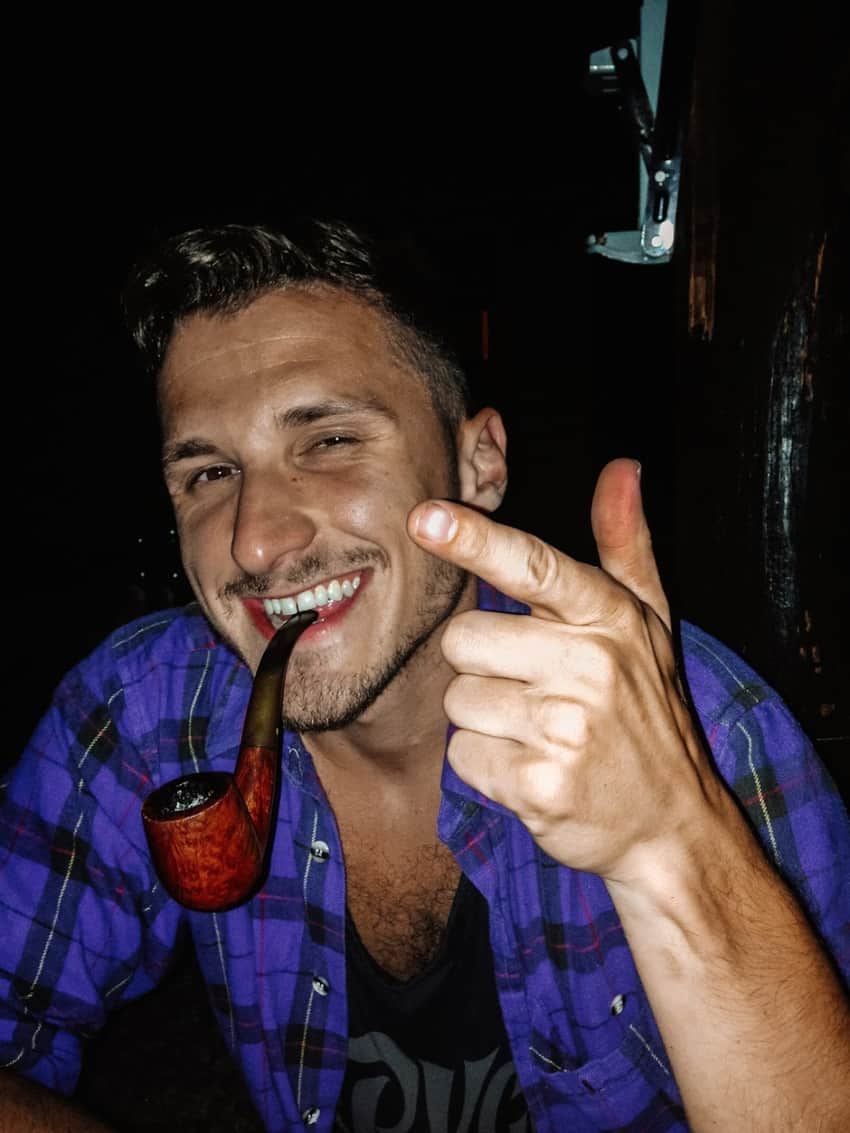 “Oh, bless your hearts. Let us repay you,” she said.  “I’ll make the best margaritas you boys have ever tasted.”

While we were assembling their tent, a blender was pulled from their van and plugged into a converter.  The lady in the wheelchair was laughing as she crushed ice on the picnic table.

By the time it was over, it was well after 1 am.  Their tent was up.  The crickets were awake.  The margaritas were poured.

It turned out, her recipe for the best margarita was simple – crushed ice and bottom-shelf tequila.

“You know your way around the blender,” I said through clenched teeth. Mike coughed.

“Tell us your secret,” said Stodd.  My tongue felt hairy.

“The secret… to anything good,” she said, “you don’t adulterate it.”

We woke up cold in our clothes at first light.  Three grown men crammed in a two-person tent.  The camp was already humming with other activity – logs being thrown on smoking coals, clanging dishware, muffled coughs, and conversation.

For us, it was granola bars and black coffee in silence while the sun rose to burn off the morning mist.  When the heat came, we were off to Whippoorwill and down into the drink.

It was like we had opened the door to another world, a climber’s Narnia.  Soloing over the deep water – fifty, sixty feet – meant roaring down into the lake when we fell from the overhanging cliffs.

I was surprised how deep below the surface your body goes when dropped from those heights.  Enough for the temperature of the water to change.  Enough for you to fight to get back to the top.

Climbing on the cliffs without a rope could mean a fine if caught, so we took turns watching the edges of the water while the others climbed.  Outlaws.  We swam for hours, from route to route.

We would scramble up the wall as far as we could, then spinning, screaming, crashing, we came back down.  We climbed until our cooler went empty and the sun was brushing the tips of the pines.

They Knew the Secret, Too

One night a new couple parked next to us back at camp.  A 90’s Dodge utility van they had renovated and were living in full-time.  Traveling to every climbing spot we can, said the man.  The Lake’s been on our list forever, his girlfriend added.  They knew the secret, too.

On their last night, we were having coffee crammed inside their van.  We sat on chalky bouldering mats and talked favorite crags and future plans –  sharing stories and secrets as the coffee grew cold.

We lit a fire outside with wood borrowed from one of the fishermen.  I said how I wanted to come back and dive the lake.  I had seen some old-timers with scuba gear that day.

There was a whole town buried down beneath the water, they had told me.  The town of Gad had been flooded by the Army Corps of Engineers years ago to build the dam – to create the lake.

We laid flat on our backs in the grass, exhausted, letting the sun bake us dry.  Mike was passed out on the peeling roof of my Explorer.  It was our last day at the lake.  That morning we had climbed up to a ledge maybe fifty feet above the water.  We had seen other climbers topping it out hours earlier.  An easy climb.

When we arrived at the shelf, a space no bigger than a dinner table, there was a dry bag tucked beneath some rocks.  Its owner, having grown tired of dragging it around, stashed it there, planning to come back later.  There was a phone inside the bag.

Straightaway, we took pictures of ourselves posing on the ledge, sending them to our own phones back at camp.  Our best picture we used as the phone’s new wallpaper – a gift for the owner to find.

Back at camp, we were talking about that climb, when a man in glasses and an army green jacket started heading towards us.  He did not smile as he came onto our site, hands buried in his pockets.  He squinted at us with his whole face.

“You climbers?” asked the man, tucking a strand of greasy hair behind his ear.  We told him we were.  Right on, he said. He was barefoot and scratched the soles of his feet as he spoke.  “Wanna share a joint?” he asked.

Pulling a spliff out of his shirt pocket, he lit it up before any of us could answer him.  Grown right there off the lake, he told us proudly, gesturing up past the dam.  He took a long drag and exhaled through his nose.  He sat down, wanting company.

I was surprised by this place, I told him– the people I’d met, the uniqueness of the landscape – How had it remained so obscure? Stayed such an outlier? How had it been kept so quiet?

Summersville Lake was waiting to be discovered, but only in pieces and small bites.  Pink with potential left untapped.

Some places I’ve visited are simply checked off a list, but Summersville Lake was a place to return.  It had a different vibe than any other climber’s haven I had been to.  It was a walled city.  It felt like… a secret.

“No one’s in a rush to ruin it, I guess,” said the man.  He was scratching his beard between puffs, thinking.

“Maybe these places are best left the way they are.”  Unadulterated, I thought.  The spotlight might burn off the spell.  The magic was just another secret Summersville was keeping.  Find out more about Summersville Lake. 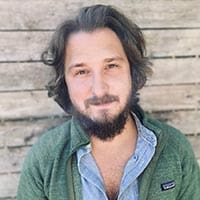 N. Lavender is a poet, travel writer, and interdisciplinary artist. He is a graduate of Indiana Wesleyan University’s Creative Writing Program and SIS Travel Writing Program in Seville, Spain. His work has been featured in Caesura Literary Magazine, Apartment Therapy, Dwell, and his website Augustine Along the Way. He is traveling and living full time in a vintage Airstream, and is currently based in Zeeland, Michigan.