As far as highways go, there are household names travelers are familiar with: Route 66, Pacific Coast Highway, Germany’s autobahn.  These iconic roads are the stuff of legends.

Norway is expected to insert their name amongst this list with massive improvements on their already impressive E39 highway along its coastline. The “E” signifies the road is part of the European Road Network, an expansive network of roads throughout Europe. 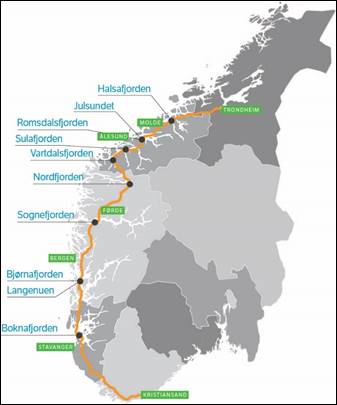 About a third of the country’s population lives along Norway’s western coast. Creating a monolithic, continuous highway will connect the entire west coast of Norway and is predicted to benefit the country both economically and socially.

With the main goal of reducing travel time by half, both locally and on the whole stretch. The project is estimated to cost a staggering grand total of $47 billion.

Currently, the E39 connects Trondheim down to Kristiansand, with various major cities along the way. The entire trip, ferries included, has a total travel time of 21 hours. Ferry crossing at the fjords currently accounts for much of the travel time.

By the end of the project, vehicles will be able to make an uninterrupted drive from Trondheim at the top of Norway, all the way down the western coast to Kristiansand and even Oslo on the southeast part of the country, with the option to stop at all the major coastal cities on the way.

What’s important to note about the E39 is that, as of now, it’s not a continuous highway. In its entirety, it spans the whole western coast of Norway, but due to deep and expansive fjords, ferries are required at crossing points, disabling a fluid and uninterrupted drive for the totality of the highway.

This is all planned to change within the next thirty years. “We have finished about 11 percent of the project work,” said Tore Askeland. Tore is the Project Manager for the E39 Highway project with expertise in Fjord crossings, Risk Management, Sustainable Infrastructure, Planning and Construction, and Strategies, to name a few. Let’s just say he’s the man for the job.

“In Norway, the politicians decide what road projects to build and when. They initially wanted the E39 to be finished in 20 years (2038), but the cost is too large, and there is a need to build also other roads,” Tore told GoNOMAD.

He suspected politicians will prioritize the parts of the project that are the most socio-economically profitable.

The western coast of Norway generates about 60 percent of Norway’s export value, according to Tore. Fluidly connecting the whole western coast has the potential to generate lots of income for Norway, as well as towns and cities that are along the coast, as they will be much more accessible.

A project as monumental as this needs all hands on deck and hands the project has. The multidisciplinary project requires people with knowledge in safety, materials technology, social economics, structural engineering, operation and maintenance, climate and environment, etc.

One aspect of the project will be a considerably challenging engineering hurdle to leap over. The various fjords, long, narrow, deep, inlets of the sea, are going to be a challenge for engineers. Tore noted, “The Sulafjorden Crossing is the toughest crossing due to the harsh environment close to the Atlantic Ocean.

We are currently measuring wind and waves and it will not be easy to build and operate it.

An open bridge can be closed due to too much wind,” he continued to note, “A submerged floating tube bridge can be the solution, but we don’t know yet.”

Using bridges to connect points of land between fjords is the focal point of the project. “The fjords are deep, which means traditional bridges, with pillars to the bottom, are not possible,” said Tore.

“Also, several of the fjords are too wide for suspension bridges. We use suspension bridges for bridges shorter than 2 km. We have lots of knowledge from floating structures, like platforms, etc., but these bridges are long and slim, and behave differently in the waves and wind than a single floating point offshore.”

The goal for these bridges are for them to be strong enough to handle the constant battering of wind and waves, and also to avoid fatigue. Engineers must keep this in mind while also noting they must keep costs and carbon footprint low.

Remember when I mentioned a submerged floating tube bridge? Project members are developing a bridge that’s essentially a floating, underwater tunnel. Tore made sure to clarify they have not decided whether they are going to build it at any crossings, but it would be an incredible addition to the superhighway. “It is possible that we may have to use this concept to manage the crossing of Sognefjorden and/or Sulafjorden due to ship risk and wind/wave challenges,” he said.

He noted, “If built, it would be first in the world…that is, unless someone does it before us.”

This project is filled with many “firsts,” “largest,” and “longest” titles for many of these bridges. A 5km (~3 miles) long floating bridge to cross Bjørnafjorden is also in development, in combination with a long cable-stayed bridge, which can turn out to be the longest in the world, according to Tore.

He also made sure to inform me that they plan on building the longest and deepest subsea road tunnel to cross Boknafjorden, north of Stavanger.

It’s Going to Be Tough, But Exciting

“Even though there are many meters of ordinary road to upgrade and build,” Tore said, “I must say that the fjord crossings are the most exciting part.

All crossings have to be developed to fit the local conditions, but the smallest can be built with ‘known’ technology.

To expand the limits of known technology, and to be able to build large constructions with new technology is a huge challenge.”

He cited many guidelines the engineers and architects will have to work with such as reduced cost, reduced carbon footprint, increased service life, and increased safety. Tore is excited to develop new technology to help reach these goals. He told me:

“We have a project going on, to reduce cost, increase quality, and reduce carbon footprint by using automated production methods and laser and laser hybrid welding technology. If we succeed in this project, we can build the bridge close to the fjord crossing, and then the need for polluting transport on large ships is reduced.

“The laser welding technology also uses a lot less energy than traditional laser welding (manual methods). We have a program going on, now building a pedestrian bridge, building a “small” road bridge in 2021, and a large road bridge in 2022, making us ready to use this technology on the very large crossing of Bjørnafjorden in the years to follow.”

Practicing safe, eco-friendly, and sustainable building methods is of paramount importance for any and all major projects. A massive safety concern for ships accidentally colliding into bridges. Project managers have to note, many of these fjords are also crossings for large ships as well.

Bridges must be tall enough to still allow for the heavy flow of shipping traffic seen at such fjords. Larger ships can damage a bridge beyond repair if a collision takes place and, in some instances, cause collapse.

Other safety concerns include making sure the number of traffic fatalities or incidents is no higher than the Norway national average, which is quite low, and reducing the risk related to fires in the tunnels, which would be a nightmare in some of the longer tunnels in the project.

As Norway continues to embark on the largest infrastructure project in the country’s history, the world cannot help but be marveled at what it will accomplish in the years to come.

When the project is finished, it will call for the ultimate road trip.

Quinn He is a writer and journalist from Wayne, NJ. His time as the Arts/Living Editor at the UMass Daily Collegian has given him the freedom to write predominately about music, but he hopes to enter the field of science writing as a career. Outside of work, Quinn enjoys creating music, reading, and running