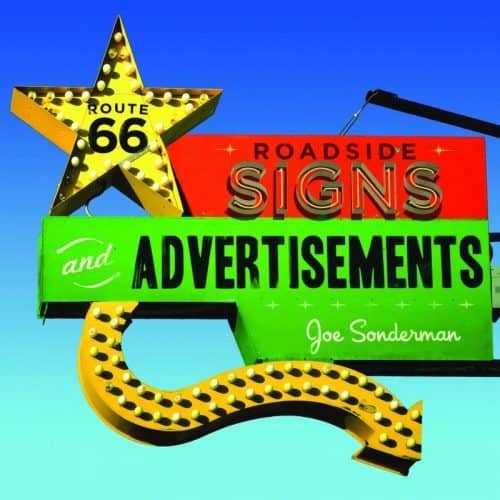 he presents a history of some of the thousands of signs and advertisements that can be found or once were found on Route 66.

Joe teamed up with photographer Jim Hinkley to create this catalog of signage and strange sites. Joe has written many other books about Route 66, many of which you can read excerpts of on GoNOMAD.

You can get your kicks–and pretty much anything else–on Route 66, provided you see the sign that’s advertising it! Route 66 Roadside Signs and Advertisements showcases the colorful history of commercial signage along the Mother Road. From kitschy to classy, this book includes photos of early vintage signs as well as modern signs.

The vivid photos are organized according to the type of establishment the signs are for, such as roadside attractions, motels, restaurants, businesses of ill repute (bars, strip clubs, etc.), and more.

While the book places emphasis on high-quality visuals, it also includes anecdotes and history about the signs that sprang up along the sides of Route 66.

The most famous Route 66 signs get center-stage treatment in the book, with two-page spreads accompanied by detailed text. Such signs include icons like the Blue Swallow in Tucumcari, New Mexico, the Munger Moss in Lebanon, Missouri, the U-Drop Inn at Shamrock, Texas, and the El Vado in Albuquerque, New Mexico.

Additional information is included, such as background about buzzing neon lights–how these signs are actually made and how they get restored. Each image from this famous American roadway could be a postcard, so allow yourself to be rubbernecked by Route 66 Signs and Advertisements.

This latest book features not the road, but the many signs you can find as you drive along it. 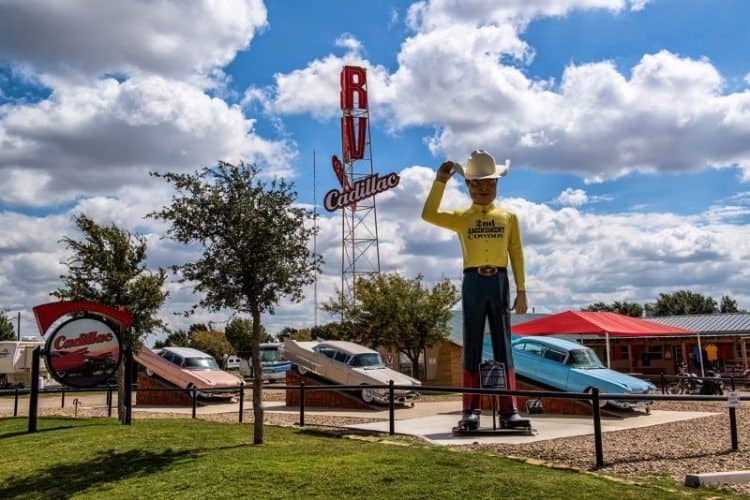 Chapter 5 “Cowboys & Cadillacs” Some History of Route 66 in Texas

At first, private trails also ran across the Texas Panhandle. The route that became US 66 was known as the Postal Highway east of Amarillo and the Ozark Trails Route west of Amarillo. The Ozark Trails route came into Amarillo from Wellington and then headed west, connecting with the National Old Trails Road at Las Vegas, New Mexico.

The 1919 book Ozark Trails Route made no special mention of Amarillo. Vega and Glenrio were the only Texas communities highlighted as
“live towns that are taking a public-spirited interest in promoting this route.” In other words, they paid.

When the federal highway system was approved in 1926, not a single mile of concrete had been poured in Texas and motorists had to open gates between Shamrock and Amarillo.

The first hard-surfaced section was in the San Jacinto Heights area of Amarillo, paved with brick in 1927. Since the major cities of Texas were far to the south, there was little interest in improving Route 66. A dirt section between Alanreed and Groom became infamous as the Jericho Gap, where thick mud trapped vehicles.

The runners in the Bunion Derby endured snow, sleet, and mud in their six-day journey across the Golden Spread. Ninety-three runners remained when they left Glenrio on April 4, 1928. In addition to the weather, the mud of the dreaded Jericho Gap caused several injuries.

This section of Texas was hit hard by the same drought that drove so many farmers out of Oklahoma. The Panhandle endured 192 “dusters” between 1933 and 1936. About 35 percent of the farmers in the region left between 1935 and 1937. But Route 66 provided an economic lifeline for those who remained behind,

and government relief programs put men to work paving the Jericho Gap. The paving across the state was finally complete in 1937. In August 1938, Amarillo hosted ceremonies dedicating Route 66 as the Will Rogers Highway.

A big parade included Mrs. Will Rogers and Will’s favorite horse, Soapsuds. Motorcades from Chicago and Los Angeles met in Amarillo and a pageant with a cast of 1,500 depicted four hundred years of Southwest history.

During World War II, leisure travel slowed dramatically and the 66 Highway Association disbanded. But another great migration took place, as families headed west to seek jobs at defense plants and facilities such as the Pantex Plant and the Amarillo Army Airfield.

But the section of two-lane between Shamrock and Amarillo became known as “Bloody 66.” By 1947,  the road had been improved to four lanes from the Oklahoma line almost to Groom, and from Amarillo to Bushland by 1954.

Inspired by the autobahns of Germany he saw during World War II, President Dwight Eisenhower signed the Interstate Highway Act in 1956, providing federal money for a new system of superhighways. Interstate 40 would replace Route 66 across the panhandle.

Buy this book on Amazon: Route 66 Roadside Signs and Advertisements

Read other excerpts about Route 66 on GoNOMAD:

Route 66, the Main Street of America by Connie Westergaard

Postcards from Route 66  by Joe Sonderman