The Eric Carle Museum for Children and Illustrators

Drawn to the Carle: A Massachusetts Museum All About the World of Picture Books

Is Charlotte’s Web on your list of favorite books? How about Corduroy, Goodnight Moon, Winnie the Pooh, If You Plant a Seed, Don’t Let the Pigeon Drive the Bus!, Frog and Toad Are Friends?

Many of us took our first steps toward the lifelong pleasure of reading with picture books, reason enough to win them a place in our hearts.

When you have children, you develop a lasting affection for the stories you read them when they were toddlers happily curled up next to you.

Juxtaposed with the spare text of most children’s books, the illustrations are truly worth a thousand words. At the Eric Carle Museum of Picture Book Art, in Amherst, Massachusetts, they’re honored as priceless.  The museum is located on the campus of Hampshire College, in a bucolic setting of apple orchards and fields.

Eric Carle, author, and illustrator of more than 70 books, including the very famous Very Hungry Caterpillar, and his wife, the late Barbara Carle, founded the museum in 2002. 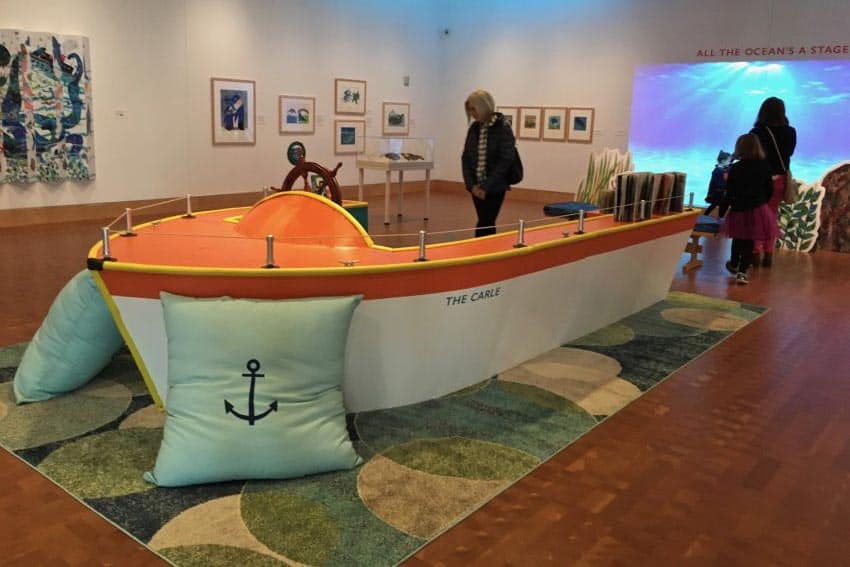 Ando also designed the beautiful addition to the Clark Institute of Art, in Williamstown, Massachusetts, in the Berkshires.

Given its name, you might expect the Carle to be all about the creator of that larval overeater.

But in the nearly 20 years since it opened, the Carle has shown that the story of little golden books is an epic tale with a cast of thousands—well, make that scores—of illustrators and author-illustrators.

A note: The genre is unusual in that although many picture books are both written and illustrated by one person, many others are a collaboration between a writer and an illustrator. 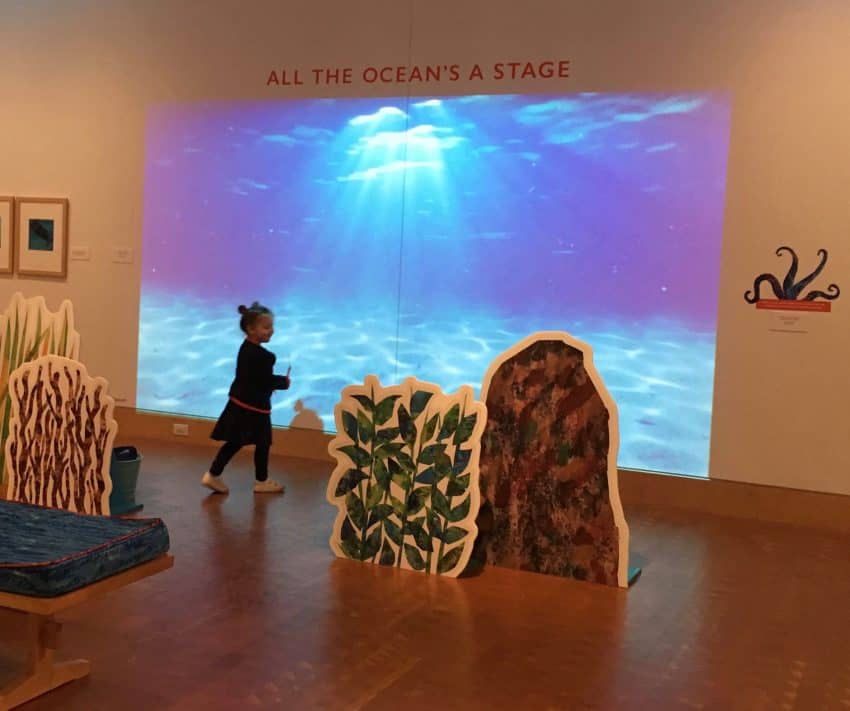 Which Artists Have Been Featured at the Carle?

A short list of artists and authors the Carle has featured over the years reads like a who’s who of the field:

If those names don’t mean anything to you, maybe some of their titles will: Madeline, Paddington Bear, Mike Mulligan’s Steam Shovel, Where the Wild Things Are, Harriet the Spy…

The exhibitions (there’s usually more than one up at a time) occupy spacious galleries with an intimate atmosphere; because works on paper are prone to fading, lights are kept fairly low in the rooms. On your way to

them, you move through a lofty space, light-filled even on cloudy November days, a quartet of enormous Carles scintillating on one wall. There’s an art room at one end, a reading room at the other, as well as a theater where the museum has presented plays, films, concerts, and talks. 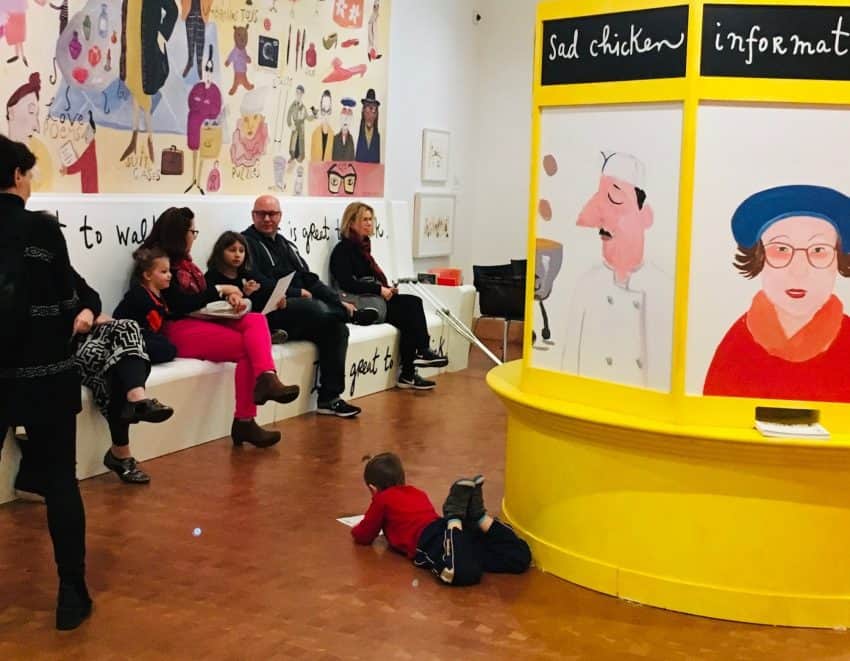 Standing next to a century-old orchard, the building itself has literary connections.

It was designed by Earl Pope of Juster Pope Frazier; the Juster of that firm is Norton Juster, architect emeritus and author of The Phantom Tollbooth.

Here’s how Juster has described what happens when its main character finds a tollbooth in his bedroom:

“He drives through it in his little car, and he finds intellectual turmoil, where rhyme and reason have been banished.”

A fantasy that doesn’t sound so fantastic these days.

The last time I went to the Carle was on a bright November day in 2019, to hear the brilliant and irresistibly charming Maira Kalman talk about the artwork in The Pursuit of Everything: Maira Kalman’s Books for Children, on exhibit there.

Although the exhibition focused on her kids’ books, the versatile Kalman has also done books for adults, New Yorker covers, and a blog for The New York Times, among other things. 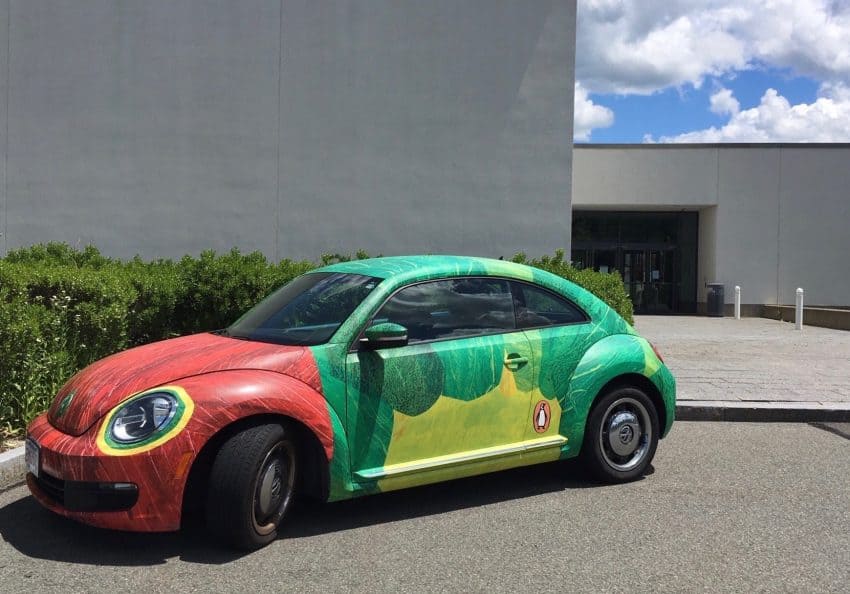 As she moved around the show with a flock of admirers in her wake, she was brilliant and charming in a “just being herself” way.

Besides a slew of artworks done in her distinctive style, there were some of Kalman’s sketchbooks in glass cases, an over-size green monster and, at the entrance, what the museum termed “a tableau vivant”: a towering wall of objects  (bucket of paint tubes, photographs, musical instruments) that have populated her studio.

The exhibition had people looking and laughing and leaning closer to the works and studying captions and talking and pointing out details to friends and offspring. Some colored on the floor, while others put highly irregular items in a dog’s stomach.

Pete, the long-torsoed protagonist of What Pete Ate From A to Z, was pictorially represented on a display board, and children (or adults who wished they were children) could feed him a chewy-looking sneaker, a pink Popsicle still on a stick, an eggbeater, and other magnet-backed decals.

The Pursuit of Everything is just one of the many shows that the Carle has originated and have traveled to other museums around the country.

It is always making a case for the essential importance of and the genius behind picture books, balancing playfulness and seriousness to illuminate what goes into their creation.

When children see books they love showcased there, they may feel that because their reading matter signifies, they do, too.

For grownups, spending time at the museum may send them back to when they were kids absorbed in and tickled by a book, maybe even a little scared at moments (lions and tigers and bears, oh my!) but still trusting there would be a happy ending.

Looking now at the photographs of the gallery walk I took that fall day, I’m taken aback to see crowded rooms, people—strangers!—standing shoulder to shoulder. So much has changed since then. The scenes seem to belong not just to another season but also to another era.

“To wander about in a room in a museum,” Kalman has said, “and to have the fluttery feeling of discovery and potential is a great feeling.” When I travel, my primary destinations tend to be museums; maybe that’s true for you, too. I miss wandering around the galleries and museum people watching.

Sadly, the Carle had to close this spring because of the pandemic, but here’s that story’s happy ending: the Carle has reopened! I’m looking forward to experiencing that great, fluttery feeling there and, eventually, in many other museums once again.