Cruising With the Family in Santa Rosa and Beyond

Sonoma County is wine country, no doubt about it. Just about anywhere within its borders, you’re likely to see row upon row of floppy-eared vines stretching to the horizon.

California’s Sonoma County also has a whole lot to offer people for whom wine tastings aren’t a top priority: families for instance. Taking Santa Rosa as a base of operations, you’ll find a wide variety of kid-friendly destinations in the region.

And although it’s true, when you travel with little ones, leisurely afternoons spent sampling a vineyard’s grand cru selection might be out of reach, even wineries may have attractions for both young and millennial.

Getting the Scoop on Snoopy 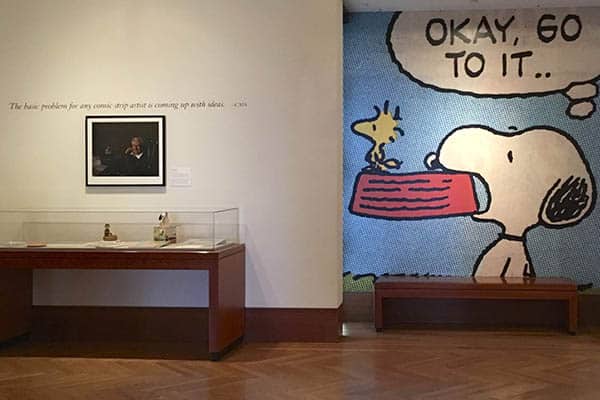 As the creator of “Peanuts,” he introduced that classic cast of comic strip characters: Lucy, Snoopy, Linus, Pigpen, Woodstock and, of course, Charlie Brown.

Schulz was a genius when it came to depicting the funny, bittersweet life of children.

“Peanuts” is known and loved around the world, but perhaps not everyone knows that Schulz lived and practiced his art in Santa Rosa. (My unofficial survey indicated this is indeed a lesser-known fact.)

More fun facts, courtesy of the museum: Those who knew Schulz well called him “Sparky,” his childhood nickname. Christo and Jeanne-Claude, the artists who wrapped one million square feet of the Australian coast, also made Wrapped Snoopy House, a canine-scaled environmental artwork on permanent display on the second floor. And as to the identity of the little red-haired girl, no spoilers here—but the museum tells all.

At the museum, you can study original strips up close.

I especially enjoyed seeing, step by step, how Snoopy evolved into the adorable big-nosed beagle we know today.

You can also check out the desk, and re-created studio, where Schulz drew the strips, admire the “Colorado Nursery Wall” Schulz painted for his daughter Meredith, and take in exhibitions about, say, Woodstock the wee bird and Woodstock the music festival, from which Snoopy’s feathered friend got his name.

(This year marks the 50th anniversary of that peace-and-love weekend—the show is up into March 2020.)

Drawing at the Museum

The day I visited, the children scooting around its airy spaces were so into being there. That’s partly because what kid isn’t interested in drawing and partly because the museum caters to the younger set.

On Museum Mondays for Toddlers, children ages 1 to 5 come for arts and crafts and cuddle up on comfy couches for story time. Every day, the theater screens animated specials, such as You’re a Good Sport, Charlie Brown, and in the Education Room, budding artists can draw zoetrope strips, try their hand at cartooning, make an origami doghouse à la chez Snoopy, and more.

The big picture? This museum makes families happy—kind of like a warm puppy.

Speaking of warm puppies, next to the museum is Snoopy’s Home Ice, the skating rink that Schulz built in 1969 and the community has been enjoying ever since.

The arena is closed for renovations until September 6, 2019, but the Warm Puppy Café is open for business and a fun spot for a snack or lunch—Schulz himself was a regular.

Just steps away, the Children’s Museum of Sonoma County busy kids zoom from one activity to another.

The museum itself is still a teenager; a determined and inspired group of mothers in Sonoma County started it in 2005.

High energy and a palpable sense of freedom define the atmosphere. It’s great to see kids cut loose in a place designed specifically to their interests and abilities.

You’ll see them settle down to serious play, too: painting in Ella’s Art Studio, building a dam in the Mechanical Waterplay Area, climbing on the Soft Sculpture Caterpillar, scrutinizing the I Spy displays, going all aboard at Jesse’s Train Station in the Science & Imagination Gallery.

And if the four-feet-and-up strictures of amusement parks have cramped your youngest’s style, you’ll appreciate the museum’s Totopia, a special play space for those 35 inches tall and under.

Altogether, in the fun setting of the Children’s Museum, grownups might end up feeling like a kid again themselves.

Glamping with the Animals

To borrow a line from Simon & Garfunkel’s song “At the Zoo,” it’s a “fine and tumble journey” from downtown Santa Rosa to Safari West.

A 20-minute drive through woodsy hills transports you to the Sonoma Serengeti, as Safari West bills itself. In this bucolic setting, the (cape) buffalo roam; more than 900 critters representing 90 species call this 400-acre wilderness home.

As fascinating as the boldface beasts—rhinos, zebras, cheetahs, giraffes—are the many gorgeous exotic birds, including white-faced whistling ducks, flamingos, hamerkops, demoiselle cranes, and sacred ibises, in the preserve’s extensive aviary.

The friendly staff is on a first-name basis with many of the preserve’s two- and four-legged residents, who seem very content in this habitat.

A sometimes bumpy, bouncy ride in a stripped-down, oversized jeep gets you thrillingly up-close to dozens of animals.

The preserve has several options for exploring the savanna: three-hour excursions (children must be at least four years old), walks, the Ultimate Private Safari. They’re not cheap, but much more affordable than airfare to Kenya.

A Day or a Night of It

Families can make a day of it—or a glamping night of it. Strategically situated among the trees, each of Safari West’s 30 screen-and-canvas tents, imported from Botswana, come kitted out with electricity, a full bathroom (and leopard-patterned shower curtain), deck, heated blankets for chilly nights, and other amenities, right down to a bouquet of flowers on a rustic table.

The accommodations strike a happy medium between roughing it and smooth sailing for family campers.

At night, when the guinea fowls cry, you really feel as if you’re out in Africa. Being there certainly was exciting for the two little boys I talked to with their dad one evening.

They were over the moon about the birds and beasts they’d seen that day. The next morning I saw them raptly watching waterfowl on the big pond.

Another way to go for families who are into nature is an outing to Armstrong Redwoods State Natural Reserve, near Guerneville, where ancient Sequoia sempervirens tower over the trails.

Have you heard of shinrin-yoku, the Japanese concept of forest bathing? This is the place to immerse yourself in arboreal tranquility. Unpack your picnic and eat al fresco, then take the kids for a stroll.

There are some strenuous hikes, but the path I took was a piece of cake; little ones should have no problem keeping up. At the same time your children are burning off some energy, they’ll be exercising their sense of wonder among one of the world’s natural wonders.

If the idea of visiting wine country without visiting a winery just seems wrong, consider putting the Francis Ford Coppola Winery in Geyserville on your itinerary. Teens might stop rolling their eyes for a minute when they see the dramatic, cinematic décor at this self-described “wine wonderland.”

A 1948 high-gloss Tucker sedan from the film of that name and other show-stopping movie memorabilia—Oscars, Godfather scripts, Dracula costumes, plus a couple of large model sailing ships from Sofia Coppola’s Marie Antoinette—are displayed in the chateau-style main building.

Not to mention, there are two beautiful pools and luxe changing “cabines” available to guests (fees for both; reservations required for cabines). The Pool Café, open 11 a.m. to 6 p.m., sells pizza, panini, gelato, and wine by the glass. The bocce courts and board games set out on surrounding tables are free to guests.

On Tuesdays, the chef of Rustic, the winery’s full-service restaurant, takes over the ordering and serves up a dizzying array of dishes family-style while the waitstaff assume dramatic roles. The night I dined there, they played members of an eccentric Italian clan, occasionally breaking into song by the accordionist. Sound corny? Well, they had us all at “That’s Amore.” 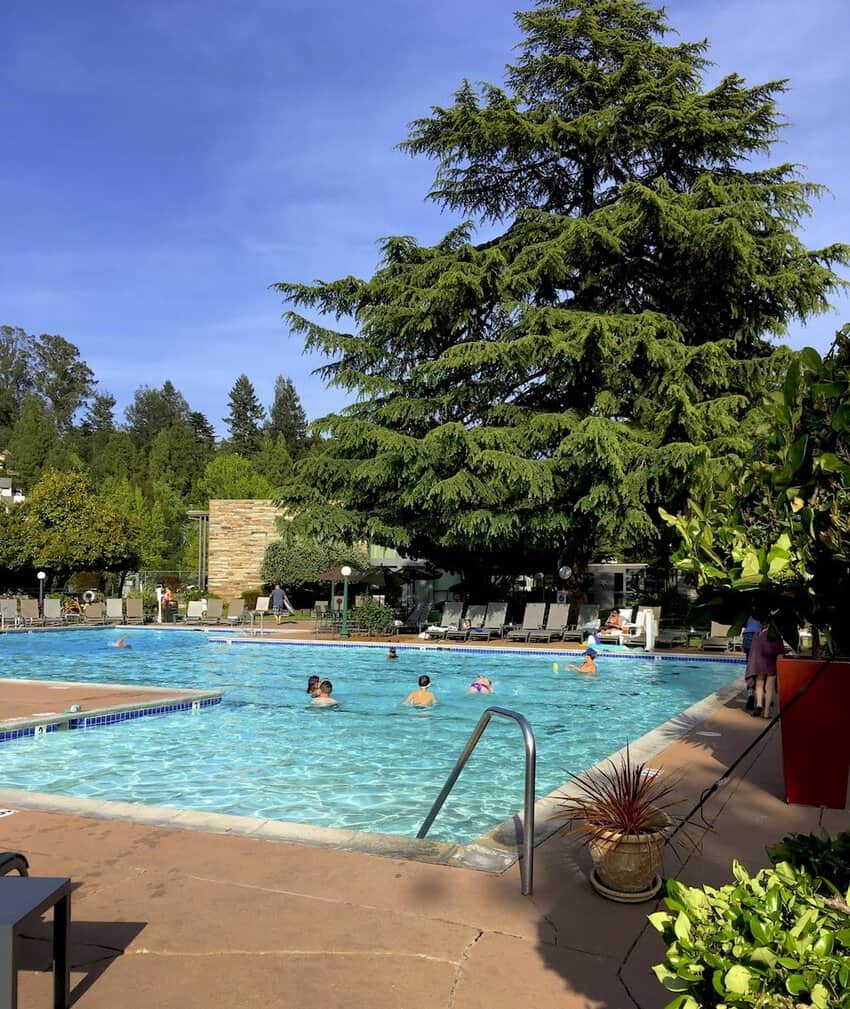 For parents trying to get their children to eat healthy food—and what parent isn’t?—the Kendall-Jackson Wine Estate and Gardens in Fulton might be the ticket. Not just eye candy, they produce the vegetables, herbs, and fruits featured in the winery’s farm-to-table dinners as well as in some San Francisco restaurants.

Both beautiful and educational, the gardens can be strolled or seen on a tour. Don’t underestimate the power of growing things to interest kids: I’ll never forget how tickled my son’s 9-year-old friend Eli was by the scent of lemon verbena encountered at a historic village years ago.

Here, kids might enjoy sniffing the lavender, seeing the bird boxes, beehive, and chicken coop, observing butterflies, maybe even tasting a violet. After such sensory overload, they could be chill enough to let their parents try a wine or two.

When it opened in 1957, the Flamingo Conference Resort and Spa was a destination for Hollywood celebs, including that generously proportioned star Jayne Mansfield.

The hotel has also hosted generations of families drawn to its generously proportioned, heated pool, human-scale midcentury architecture, and low-key atmosphere—and it still does.

As I lounged poolside, inhaling the scent of robust roses, I overheard two middle-aged dads fondly reminiscing about being there as kids, as a mom paddled her daughter past on a shark float and other children splashed away.

Nearby, a trio of world-weary adolescent girls coated in SPF 50 dished about classmates. Note to weary moms: The spa has its own good-size pool, as well as a menu of services to indulge in while Dad does pool duty.

From the Flamingo, it’s a short drive to downtown Santa Rosa and the Charles M. Schulz Museum and the Children’s Museum. (Renovations to refresh its star quality begin in winter 2020.)

At the Perch & Plow, in downtown Santa Rosa, you can savor calamari in sweet chili sauce, tempura maitake and delicata, steak frites, or a Cubano.

As for desserts, how does a caramel apple bunuelo (P & P’s take on a Spanish doughnut) sound?

The restaurant specializes in the kind of imaginative cuisine California is famous for. Not for every child’s palate, maybe, but perfect for a parents’ night out.

Across the square, Bollywood Bar & Clay Oven dishes up delicious Indian food in a lively setting. Again, adventurous young eaters will warm to such items as the pakoras, samosas, and tandoori chicken.

A sure bet for all ages is the Noble Folk Ice Cream & Pie Bar right next to Bollywood Bar. Its ice cream, including vegan and dairy-free varieties, is made from local peaches and blueberries in season.

Swiss chocolate, Dutch cookie, and salted caramel are just a few of the appetizing flavors. The peanut butter pie with Oreo crust isn’t too shabby, either.