Sailing the Sea Cloud off the Coast of Spain 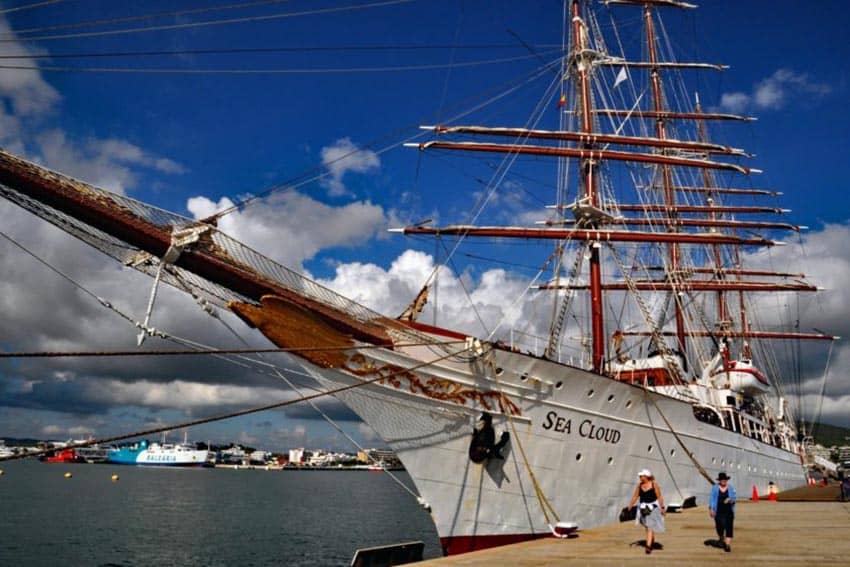 Magical. That’s how this nightcap to our evening shore excursion felt. Granted, I’m an architecture nut, so when our cruise leader allowed us a few minutes to walk around Valencia’s City of Arts and Sciences before returning to our ship I was more than thrilled.

Illuminated against a dark sky, the buildings designed by Santiago Calatrava glowed brighter than any moon.

His riot of white angles and curves reflected in black pools seemed almost supernatural and became one of my most vivid memories of a voyage along the coast of Spain.

The magic followed my husband and me throughout our sail aboard the Sea Cloud, a tall ship that’s a legend in the cruise industry.

Constructed in 1931 as the private yacht of cereal heiress Marjorie Merriweather Post, she’s one of the oldest cruise ships afloat.

She and her sister, Sea Cloud II launched in 2001, are operated by German company Sea Cloud Cruises and carry a mix of European and North American passengers.

West Across the Med

Every fall both make their way west through the Mediterranean before crossing the Atlantic for winter cruises in the Caribbean.

They often meet up off southern Spain and sail together for a few hours, a spectacle delighting passengers who line the decks to watch.

Their itineraries in Spain vary, but only slightly, calling at ports from Barcelona to Cadiz before disembarking passengers in the Canary Islands or Casablanca, Morocco.

Our cruise began in Palma de Mallorca where I fed my passion for art and architecture at the Cathedral, called La Seu by Mallorcans. Built between the 14th and 16th centuries, it mixes Gothic, Renaissance, Baroque, and Neoclassical styles and even shows off the Modernist work of Spanish artist Antoni Gaudi in a rose window 36 feet in diameter.

The most Contemporary art, though, is the work of Mallorcan Miquel Barcelo who covered the walls of one chapel in terracotta, then added sculptural figures depicting the miracles at the wedding at Cana and the multiplication of loaves and fishes. His style reminded me of Jackson Pollack’s Abstract Expressionism.

My husband humors my penchant for architecture. For him, a vacation is all about the beach.

We flew into Palma a day before our cruise to enjoy the long arc of sand at Playa de Palma. At the beach on Ibiza, our next port, no one blinked an eye at topless sunbathers or grungy-looking hippies, holdovers from the 1960s when Ibiza became a counterculture gathering ground.

While Palma is the busy capital of Spain’s Balearic Islands, tiny Ibiza remains party central. One look at the yachts docked at the marina across from Sea Cloud told us Europe’s “beautiful people” come here to play. For better or worse, Sea Cloud sailed us away long before Ibiza’s nightclubs started rocking.

We had a whole morning before docking in Valencia to watch a favorite ritual aboard Sea Cloud: Setting the sails by hand.

On all three Sea Cloud ships, deckhands climb the rigging and slide across the yardarms to release each white canvas.

On our cruise, this frequent feat of acrobatics invariably drew passengers to the decks to watch. A few, schooled by the chief officer, volunteered to help haul lines.

Witnessing Sea Cloud’s 30 sails billow from her four masts seemed magical, but their use is no gimmick.

Though Sea Cloud has two diesel engines, she sails solely under wind power as often as possible. On a transatlantic crossing in 2019, for example, she sailed 96 percent of the voyage before flipping on the engines 100 miles shy of the Dominican Republic.

Valencia’s charms did not reveal themselves from the dock, part of Spain’s busiest cargo port on the Mediterranean, so we took a pair of shore excursions to see its more inviting side.

A morning tour stopped at the City of Arts and Sciences, that complex of museums and performing arts centers that so charmed me on the nighttime visit. Calatrava, a Valencia native, designed most of the buildings, including the opera house shaped like a Roman soldier’s helmet. Together they draw more than 1 million visitors a year.

In Valencia’s old quarter, we visited its cathedral built on the site of a Roman temple and later a Moorish mosque. In one of its chapels, a stone chalice reputed to be Christ’s Holy Grail rests above the altar.

We roamed the food stalls in the Central Market, one of the largest in Europe, and bought rice and saffron, key ingredients in Valencia’s most well-known dish, paella.

I picked up a few cooking tips in a paella-making demonstration and tasting during an evening excursion to Lake Albufera where the rice is grown.

Paella off the Ship

The paella meal was our only dinner off the ship and that suited us just fine. We relished each evening meal of four courses, five on gala nights, with fine wines served gratis.

When weather permitted, Sea Cloud’s crew set up a buffet lunch on the canvas-covered Lido deck.

As Spain’s third-largest city, Valencia gets its fair share of cruises. So why choose a sailing vessel instead of one of the cruise ships docked here? Size, for one. Sea Cloud carries just 64 passengers, Sea Cloud II holds 94 and Sea Cloud Spirit will max out at 136.

There’s no pileup of passengers embarking and disembarking as may occur on ships carrying thousands, flooding ports with sightseers. Sea Cloud’s small size also meant we got to know almost all our fellow passengers over cocktails around the Lido bar and open-seating meals.

But there’s no denying a chief reason for choosing a windjammer is a sense of adventure, the thrill of experiencing the romance of sailing the high seas while standing on deck, white sails swelling with sea breezes overhead.

We had a chance to witness this magical sight from a new perspective on a photo safari aboard Sea Cloud’s Zodiacs.

The rubber boats buzzed around the ship as we shot her under full sail from several angles. We even ventured toward Sea Cloud II to capture her keeping pace alongside.

Even with their sails down, the ships made a magnificent sight. Bystanders invariably turned out to see the two sisters in port, often standing to wave as one or the other sailed away. This proved especially true in our last three ports: Alicante, Malaga and Cadiz.

In Alicante, we viewed the docked sister ships from 544 feet above sea level while taking in the architecture of castle-like St. Barbara fortress. Built in the 10th Century by the Moors and rebuilt several times since, this perch offered panoramic views of city and sea.

We could have walked up to the fort from the shore, but chose to take a funicular and save our strolling for the long stretch of beach, much to my husband’s delight.

Our twin passions for art and sand were satisfied once more in the capital of Spain’s Costa del Sol. Malaga is known for La Malagueta Beach lined with bars and tapas restaurants, and for two museums devoted to Pablo Picasso who was born here in 1881.

The 230 works inside the Museo Picasso span almost eight decades of the artist’s changing styles. Most came from the collections of his daughter-in-law and grandson.

A short distance away, some of his classic pieces, as well as sketches and ceramics, can be seen inside the Museo Casa Natal, his birthplace and headquarters of the Picasso Foundation.

Sea Cloud passed through the Strait of Gibraltar after dark so we missed seeing the big rock. By afternoon we pulled into Cadiz, an important Atlantic Ocean port since the days of the Phoenicians, and headed on foot to the old town.

In one of the most densely packed urban areas in Europe, we walked shoulder to shoulder with other explorers toward Plaza de la Catedral to see two Baroque beauties.

The massive Cathedral, on the site of a 13th-century church, took more than a century to build, 1722 to 1838. Framed by palm trees across the plaza stood Santiago Church, dating from 1635. We escaped the crowds at Caleta Beach where we found solace in its gleaming white beach pavilions and a pair of centuries-old fortresses bookending its 1,300-foot expanse of sand.

We had a full day at sea sailing alongside Sea Cloud II en route to Morocco, plenty of time to learn more about the older sister before bidding her farewell in Casablanca.

Marjorie Merriweather Post, one of the richest women in America, built Mar-a-Lago, President Donald Trump’s Florida resort, but had plenty of cash left over from her substantial inheritance to pour into the largest private yacht ever constructed.

Called Hussar V when it left its German shipyard in 1931, the windjammer sported the best money could buy. Post searched the globe for its artwork and furnishings. She and her second husband, financier E.F. Hutton, cruised in high style with their young daughter, later Hollywood actress Dina Merrill.

After Post married her third husband, a U.S. ambassador to the Soviet Union, the ship then called Sea Cloud became a venue for gatherings of the world’s political elite. When World War II loomed, Post put the yacht’s furnishings in storage and turned her over to the U.S. military for wartime service.

Strolling her deck one day, I spied a plaque depicting her battle ribbons displayed below the bridge. Sea Cloud changed hands many times after the war. A Caribbean dictator bought her as a party boat and a dispute over ownership and finances left her rotting away in Panama for eight years. German investors returned her to her native shipyard, restored and redesigned her, then launched her as a luxury cruise vessel.

Chief among Sea Cloud’s restorations are her original cabins. Ten luxury staterooms are furnished in Post’s style, especially Cabin No. 1, her own and at 410 square feet the largest. We had a chance to see it during an open house before dinner one evening.

I padded around taking in the antique furniture, Louis XIV-style bed, Carrera marble bathtub and gold faucets shaped like swans. It and the other original cabins are not only Sea Cloud’s most expensive but also the most sought after. Passengers keen on living like a 1930’s heiress may wait more than a year for Post’s cabin to become available and the chance to sail along the coast of Spain aboard a legend.

Sea Cloud Cruises: Ships cruise along the Spanish coast in late October or early November prior to their transatlantic repositioning, 888-732-2568, seacloud.com. The author’s trip was sponsored by Sea Cloud Cruises, but the opinions are her own.