A Walk Across Liechtenstein’s Snow Covered Alps in May

Our pace slowed as we navigated sheer drop-offs with loose rock crunching beneath our feet on a May hike across the small country of Liechtenstein.

Thankful for the security of the steel cable handrail, I was regretting our decision to ignore the posted sign about the trail closure.

We rounded a corner and saw a steep snowfield concealing the narrow trail buried below it.

Too steep to walk across the surface, we hoped the warm air had softened the snow enough so that we would sink in, forming our own platforms for our feet as we cautiously stepped our way across.

If not, we would be forced to turn around, retrace our steps and follow a detour route that would likely last well into the early morning hours of the following day.

This adventure began as a surprise for me. My husband, friend Cayce and another friend Meredith who was coming for a surprise visit had been planning a 3-day hut to hut hiking tour on the Panoramaweg (Panorama Way) in Liechtenstein for months now.

The planning had been especially challenging for them, as this was May and most passes remain draped in snow, and most mountain huts don’t awake from their winter slumber until mid-June.

The Panoramaweg was chosen both because the huts were open and the trail was at a relatively low elevation.

We awoke early in the morning, left a car in Ruggell, where we would end the tour, and made our way up a winding road to an expansive parking lot at the base of a lifeless ski lift.

The ski runs were green, and the loneliness echoed back to us in the damp air. Raindrops had given way to giant, slushy snowflakes. We pulled on our rainproof layers, and with a surge of optimism, emerged from the campervan and onto the muddy trail.

The trail rose quickly from the parking area, as we followed a series of slippery steps that disappeared into the clouds.

The mud vanished under an ever-thickening layer of snow that creaked gently beneath our feet. Plants struggled under the weight of the snow.

Our world shrank as we arrived at the ridge we were to follow around the head of the valley to our hut. Everywhere we looked, we saw white, but only for a couple of meters in front of us.

The rest of the world had faded out of our reality. Our safety was compromised by these conditions.

We studied the map for an alternate route and reversed our direction, returning the way we came and took a trail through the valley.

When we awoke the next morning, cheerless clouds hung heavily above us and a mist hovered in the air.

The trail from the hut led us through a small pedestrian tunnel and past farmhouses draped by meadows bursting in spring green, a welcome juxtaposition to the sky above us. We turned right at a junction, transitioning from a farmer’s gravel road to a narrow trail. A sign said the trail was closed.

Once again, we consulted our map. A detour around the closed trail would take at least 10 hours, possibly more. This trail was labeled as the Fürstensteig on the map.

A “Steig” is a label reserved for steep trails, sometimes secured with a cable, that travel through sketchy terrain. After some discussion, we marched past the sign and pressed on.

Now Meredith clung to the cable, ensuring both feet and her head remained in contact with the rock. Cayce’s confidence evaporated at the first sight of the snowfield. This was pushing it.

We split into two groups, Meredith and I; and Chris and Cayce, as we each conquered our own series of mental battles.

The trail grew steeper and the drop-offs higher as we slowly gained elevation toward the summit. The snowfield had softened just enough that we sunk gently into the surface, providing sufficient security against a slip.

The exposure followed us up the last push to the tiny summit, which like most summits in Europe, was capped with a large cross.

From the summit, the exposure continued down another ridge but soon gave way to gentler slopes and a wider trail.

By the time we reached the second, and last, summit, the intensity waned as we welcomed patches of blue sky above.

Maybe now, we would finally get that panoramic view that the Liechtenstein Panoramaweg had yet to deliver.

As we made our way from the summit into a valley, our world disappeared into the clouds once again.

The valley was quaint, still partially hidden under blankets of snow.

The trail dashed briefly into Austria shortly before the Gafadura Hut, our destination for the day. At the hut, we received a lively welcome from a very concerned hut manager. The other hut had informed her we were on our way, and she expected us to arrive 4 hours earlier.

On the final day, we awoke to rays of sunshine beaming through the window. We savored our breakfast and hit the trail for the classic European start at 9:00 am. We had 19 kilometers to cover on this day, but not much elevation gain.

The sun sparkled in the sky above us and the world was suddenly brighter. At the lower elevations, the alpine fields were already blooming and the world around us burst with color. We cheered as we entered the city limits of Ruggell, just a couple kilometers from our second car.

We all learned our own lessons on this tour. Meredith learned the hiking definition of the word “exposure.” Cayce learned that it’s okay to punch through a snowfield from time to time. I learned that to let somebody else do the planning.

Chris learned that May was just too early for this hike. Years later, the wintry ridge and daunting snowfield have faded deep into the vaults of my memory. Instead, I recall lasting friendships, the kaleidoscope of colors in the brilliant green meadows and the sweet rush of accomplishment at the end of each day.

The Liechtensteiner Panorama Trail should be done from mid-June to mid-August for the best weather, views, and conditions. There is exposure on the second day that is not suitable for those with an extreme fear of heights.

The exposed section, the Fürstensteig, should be snow-free, maintained and open during the summer months. Just don’t go in May.

The trail starts at the top of the chairlift in Malbun, which operates from June through October, and ends in the village of Ruggell. Both villages are accessible by bus.

How Long is the Hike? 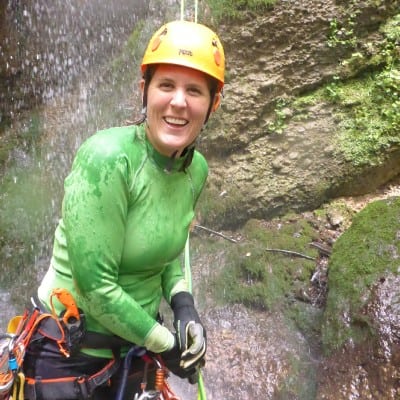 Brittany Haas, a nomad who has lived on three continents, is an avid outdoor adventurer, as well as the Chief Adventure Officer and founder of Alpenventures UNGUIDED. She runs her business in Munich.
Eurail Passes: What to Know about Buying a Europe Train Pass

Liechtenstein: A Friendly Little Country With Lots To Offer