Isle of Man: 2000 Years of Being Discovered

It’s an island 20 miles off the coast of Liverpool, England.  It has three historic, scenic train lines, one steam and two electric, that date back to 1873.

It has plenty of unspoiled, empty beaches and dramatic cliff views, and in the Victorian times, it was one of England’s most popular vacation destinations.

It even has horse-drawn railcars that parade down an old fashioned seafront promenade!

It’s the Isle of Man, and today it remains famous in the world of motorcycle racing. The Isle is the home of the TT races, which are time trials for different size motorcycles over a 37-mile course.

I visited the Isle of Man in November 2019, happy to add such an eclectic and storied isle to my destinations list.

Like many travelers, the TT–Tourist Trophy– races were the reason Man got on my radar, a man in New Zealand had waxed so exuberant about the fun he had watching these races made me need to see it.

Today many other motorsport enthusiasts come to the Isle to attend and race in road rallies, over the same course used by the TT Races that take place every spring.

I was not disappointed.

We drove the length of the 37-mile course, over regular island roads, with Andy Cowie, who has competed in the dangerous race for several years.

As we approached each hairpin turn or vast straightaway, he told me about what it felt like to ride this course on a motorcycle, approaching speeds of 200 mph in some places.

The course starts in Douglas, the isle’s capital, at a proper grandstand with pits for the racers and proceeds to wind its way through the town and then out and up into the desolate mountains including 800-foot high Snaefell Mountain.

Here you can see why Man is the perfect location for motorcycles and cars that want to go very very fast. There are almost no trees, and the roads up the mountain are perfect for racing.

There are many places along the course where men have died in horrible accidents.  But the crowds keep coming, every June and August, swelling the Island’s population to almost 130,000.

The island’s charms are many, even if you have never considered watching the blur of high-performance BMWs, Kawasakis and Hondas whizzing by.
[themify_box style=”rounded light-blue”] 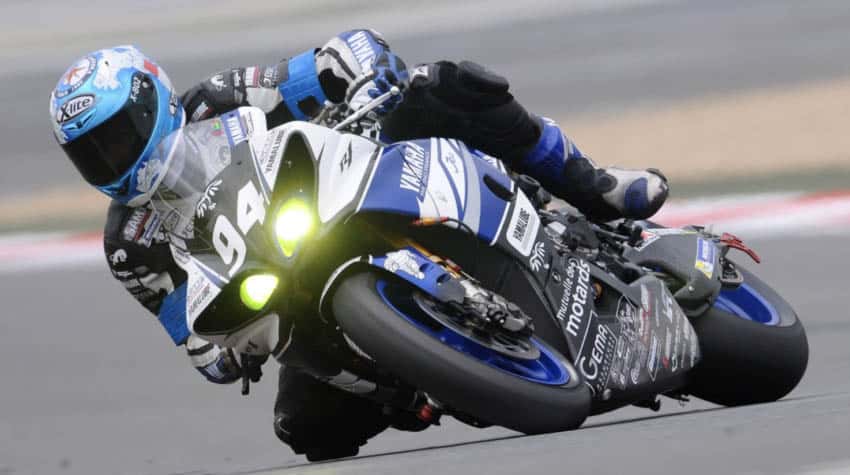 One of the island’s true charms are the two castles, which you can walk around in, and not wait for hours to enjoy.

Peel Castle is the most dramatic, set right on a cliffside, hard by the ocean.

Peel Castle is set on St Patrick’s Isle which is connected to the Isle of Man via a manmade causeway. A small cove and beach has formed on the south side of the causeway which is called Fenella Beach, named after a character in Sir Walter Scott’s 1823 novel “Peveril of the Peak”, set around Peel Castle.

Fenella Beach is particularly attractive, light pink, in color due to the queenie shells which have gathered there from the fishing port and harbor.

Walking the grounds you can see where the cannons were lined up to fight of island invaders from the Napoleonic era.

The castle has the remains of several other buildings including the chapel and hut where the gunners used to bunk. 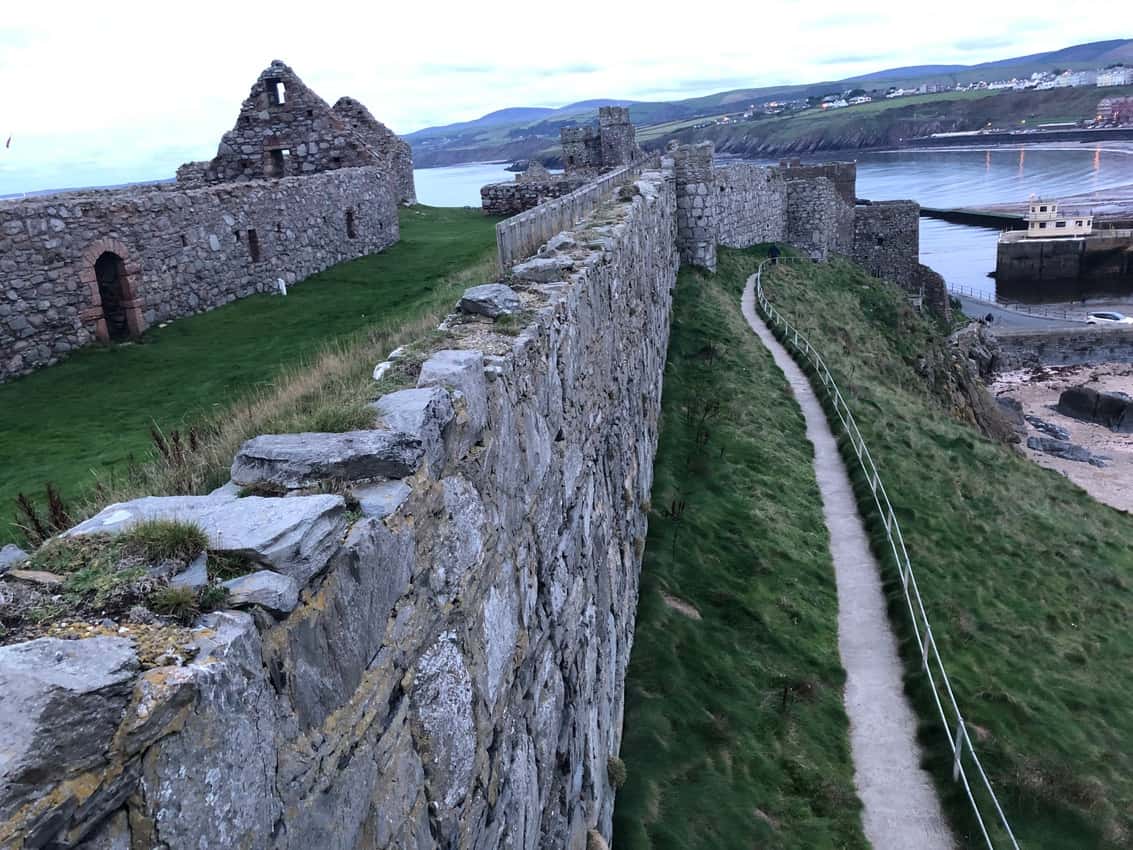 Right down the road from Peel castle is the entertaining pub, The Creek Inn, where we enjoyed more of the island’s famous cask ales produced by Okells, one of the local breweries. In the next room, a boisterous crowd cheered Liverpool to victory over Manchester City, and I knew I was in the British Isles.

I wish we had more beers that were 3.7 percent alcohol and tasted this good. Yum!

Peel has been on the upswing after the large installation of the Museum called The House of Manannan. Andy Johnson, a field archeologist with Manx National Heritage, www.manxnationalheritage.im took us through this remarkable interactive museum built on the site of a railroad depot 23 years ago.

The experience begins with the image of a ‘shapeshifter and trickster’ on a video screen, representing the isle’s ancient Celt Sea God Manannan, then moving through the ages, we meet the Vikings, who intermarried with the existing population and became early Christians.

Each stage of this century-hopping voyage is accompanied by the appropriate sounds and smells, we even get a whiff of the herring, kippers, which are still a product of the island today.

Later on,  at the Manx Museum in Douglas, we meet the Lords for whom the Isle was named, including a Lord named Stanley who would become the namesake for the most important trophy in professional ice hockey, the Stanley Cup.

The Island is a self-governing British Crown Dependency – as are Jersey and Guernsey in the Channel Islands – with its own parliament, government and laws.

It was a territory that everyone wanted to own and conquer, so through the decades there were Vikings, Scottish and English invaders, and nobody got to keep it.

Today the Isle of Man is a distinct territory on its own, not part of Britain. In fact, one caveat when you talk to people here. You’re not going to “the Mainland” because this is not a part of that. You say, ‘going across’ instead.

There are many other aspects of life here that confirm an affinity for the spirits.   When you drive from the airport to Douglas, you pass by the Fairy Bridge, and everyone who lives here says a little silent prayer wishing them well. You just do that.

There were once many dozens of fancy hotels along the seafront Central promenade in Douglas, back before the turn of the century, but today only some remain.  My choice was the Mannin Hotel, which is quite comfortable and not expensive.

The Full English Breakfast was taken in the dining room with many pilots and flight attendants who use the hotel as their home on the Isle. The 54-room hotel was built in 2016, in one of the many lovely historic buildings along the seafront. website

The island is not that big, only about 31 miles from end to end, and the Manx Electric Railway serves the eastern coast, traversing all the way from Douglas in the south to Ramsey.  This line was built way back in 1892, the first electric train in the world, and today it is still much the same, and as temperamental as ever.

We took a ride on the line and learned that if you follow instructions and have a beginner’s detailed tutorial, you can actually be the one to drive this train, under the stern tutelage of the trainmaster. “If you swing that switch the wrong way, you’ll get a big shock and the thing will blow up!”  I opted to watch and ride, rather than drive myself.

At the Tanroagan seafood restaurant in Douglas, I learned a few of the favorite dishes of The Isle.  Yes, I had heard and seen the fries with cheese and gravy.

In addition, queenies are a very popular dish, we’d call them bay scallops.  Local kippers and cheddar cheese are among the Top Foods of the Isle of Man, I discovered.

Wandering those acres of open fields I saw from the train are Loughton sheep, native to the isle, are distinctive because of their four horns. These are lower in fat than other sheep breeds. website.

I enjoyed the fish and chips at one of the many typical chip shops in Douglas, while my dining partner had her requisite fries with gravy one late dinner.  One of the traditions of England that I am glad to say is still in force on the Isle of Man is the typical Sunday roasts.

We had a delicious Sunday roast dinner at the Claremont Hotel, on the seafront in Douglas.  While I was visiting in November 2019, the streets of Douglas were being dug up for a series of new water lines and reconfiguration of the railroad tracks.

By the summer of 2020, the work should be complete and again, tourists will enjoy taking horse-drawn tram rides up and down the broad seafront pulled by huge Clydesdale horses.

My visit to the Isle of Man was sponsored by Manx National Heritage and Isle of Man Public Transport but the opinions are the author’s own. 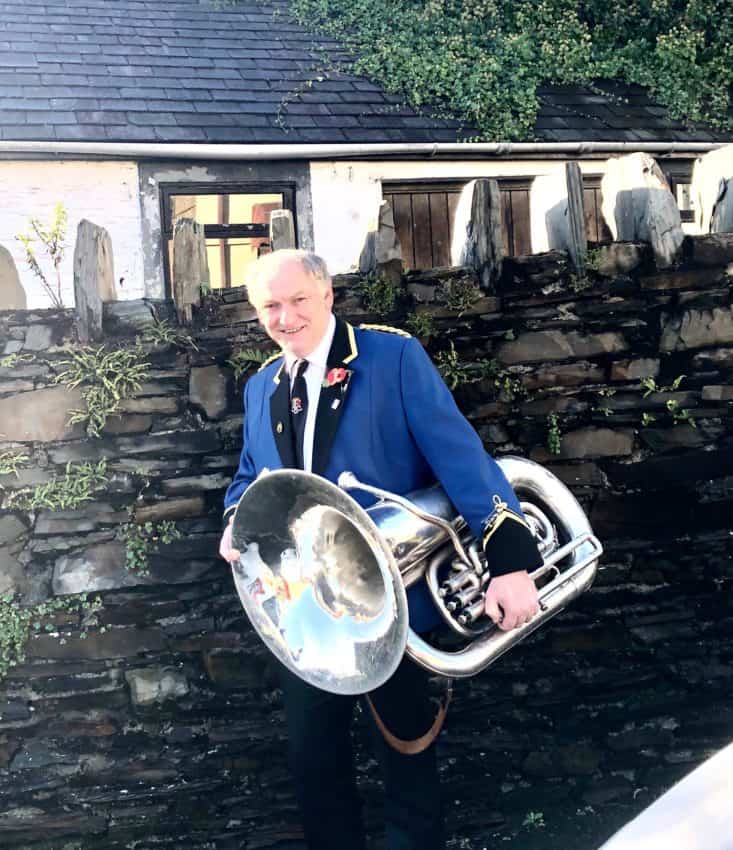 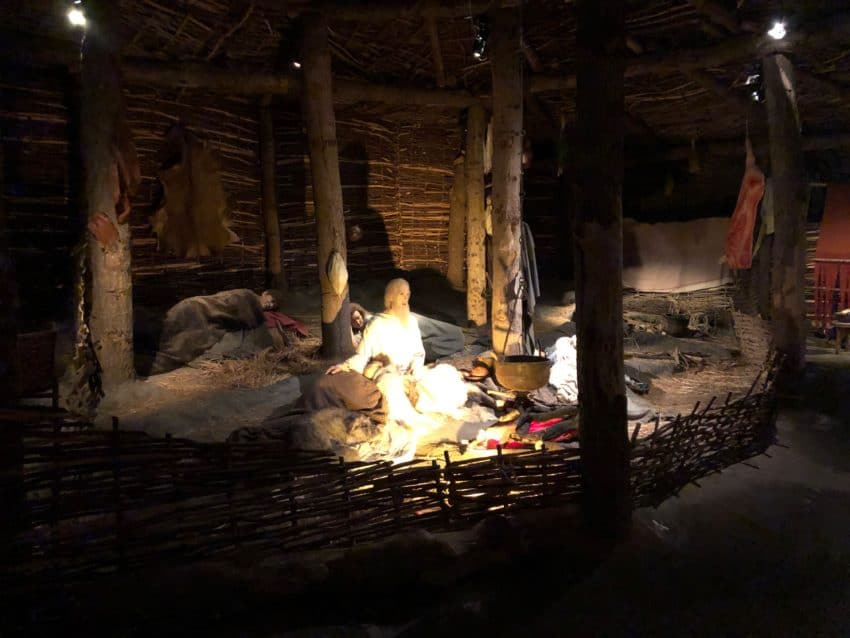 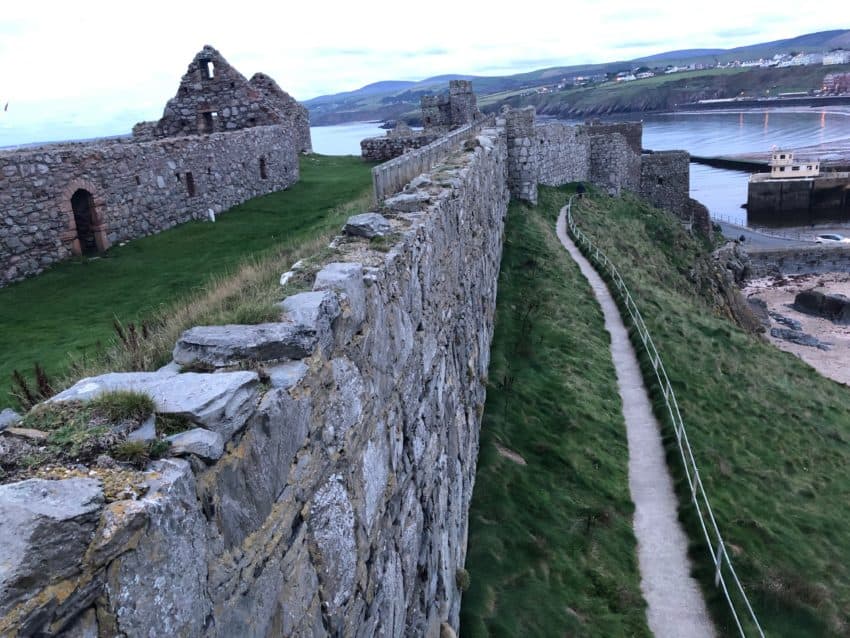 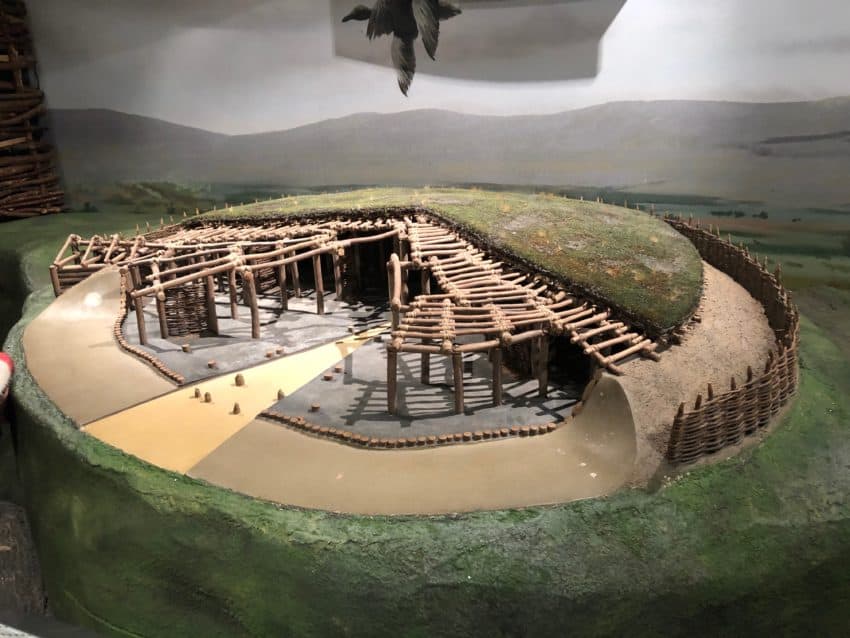 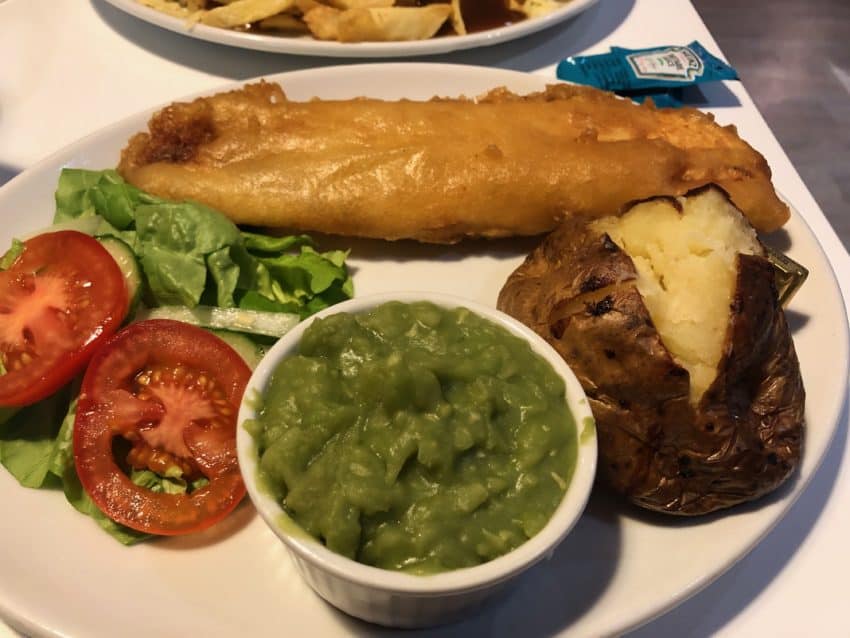 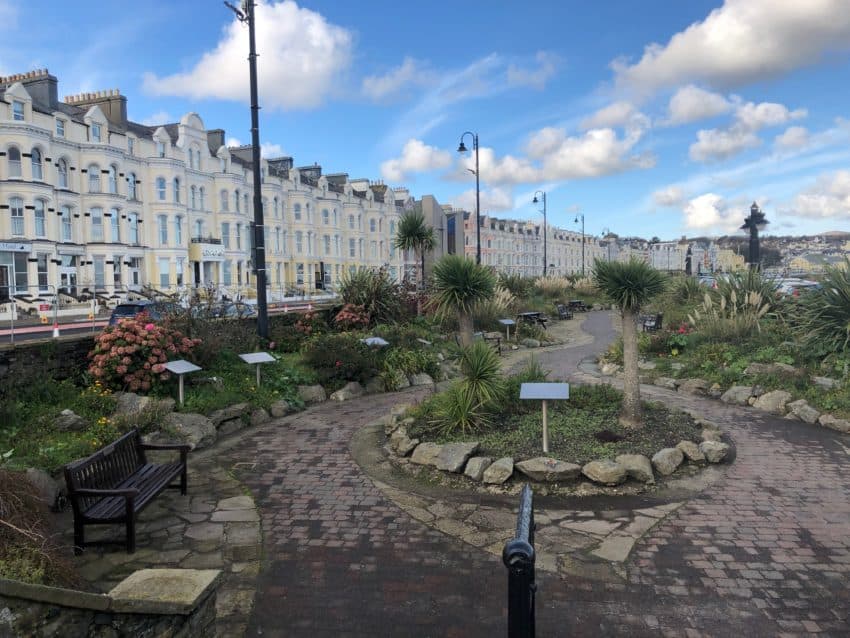 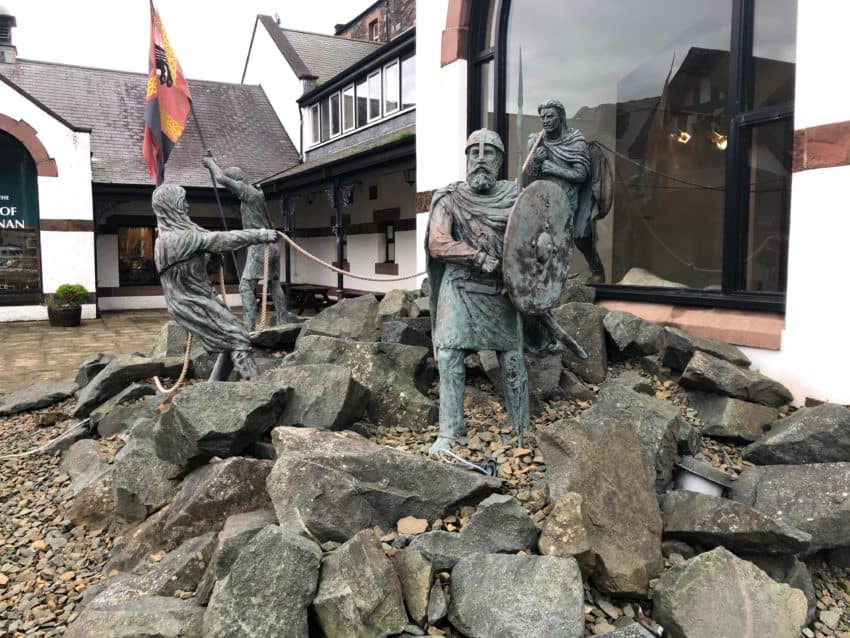 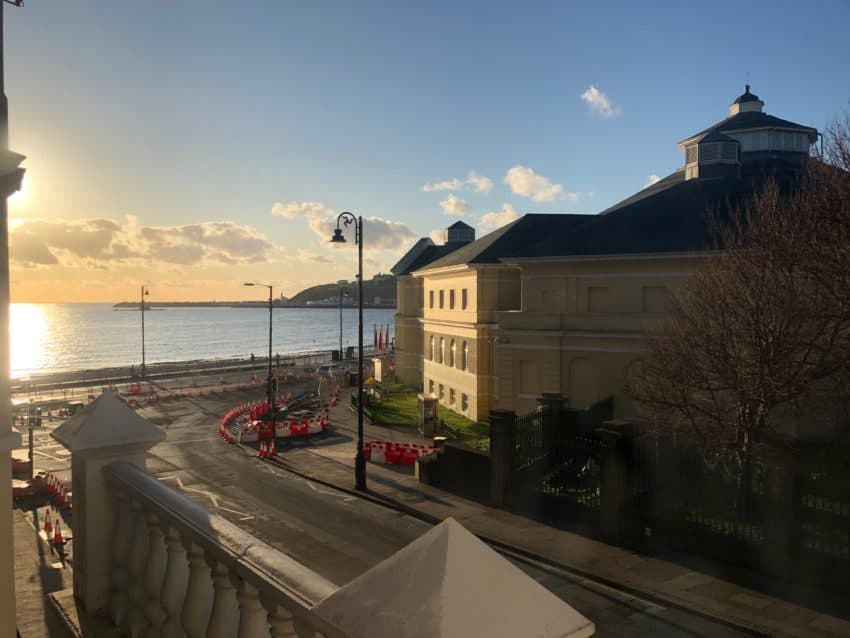 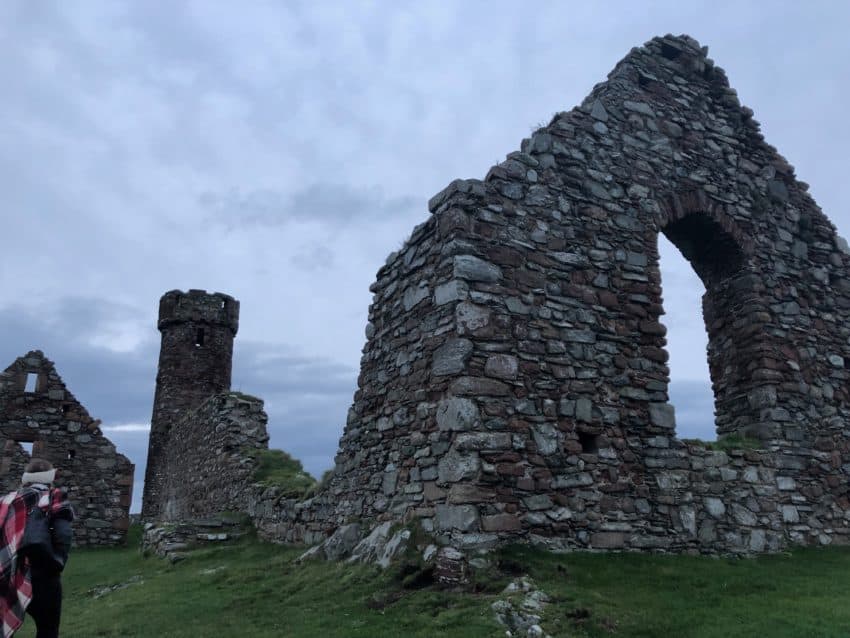 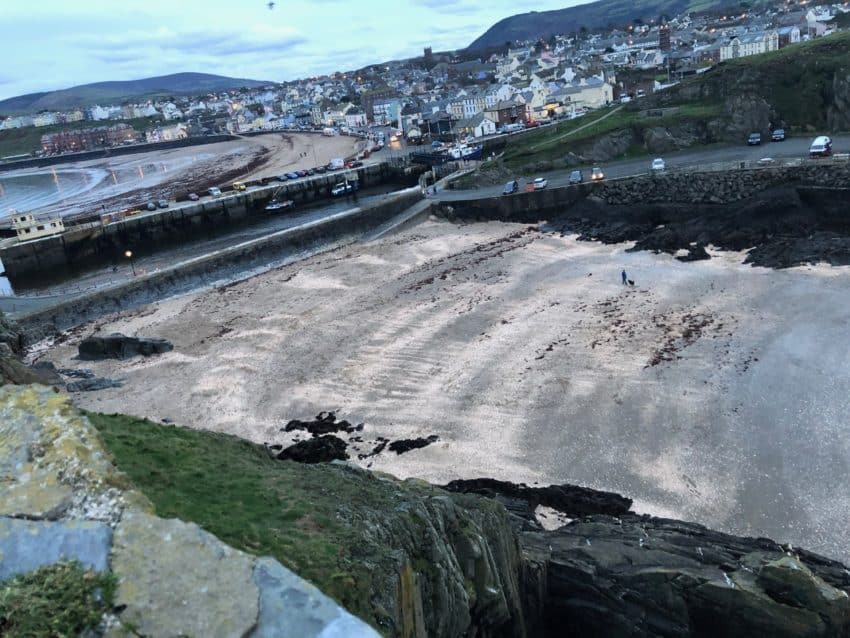 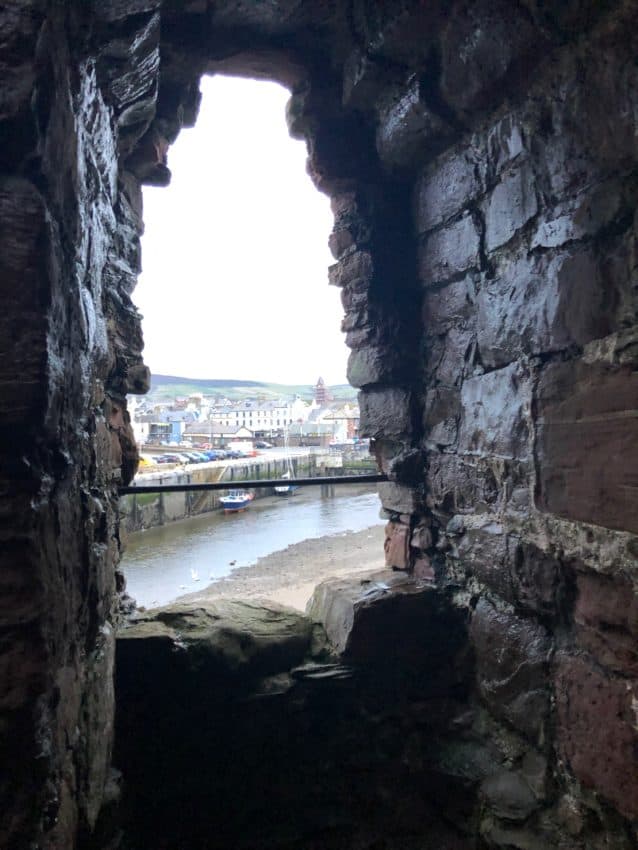 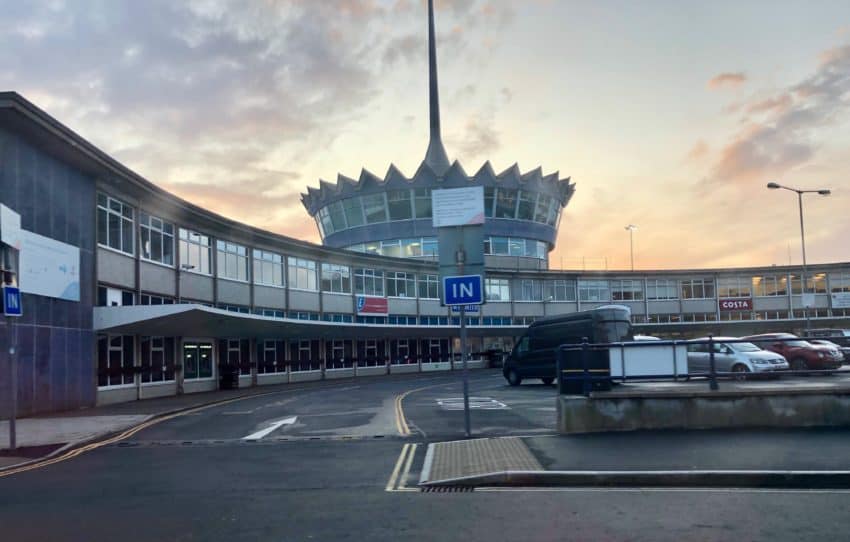 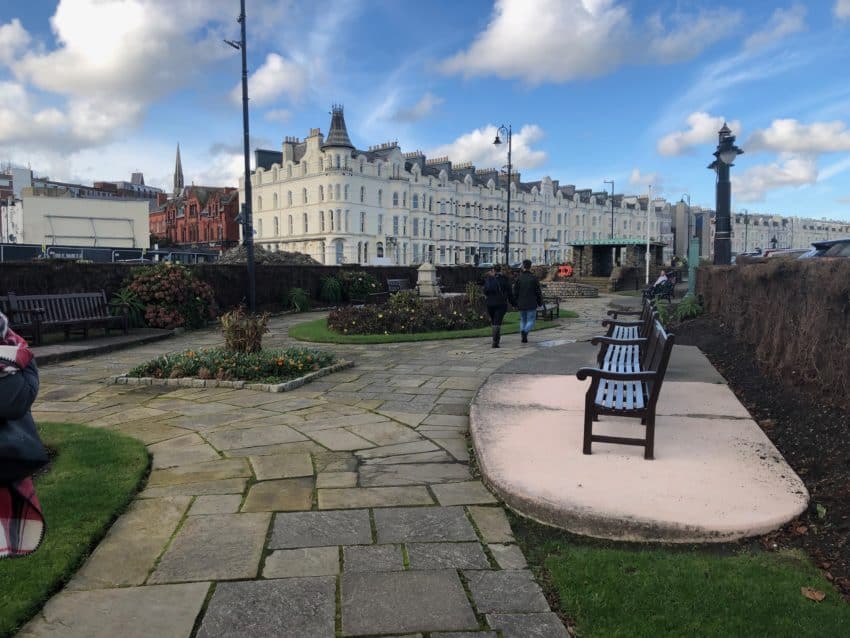 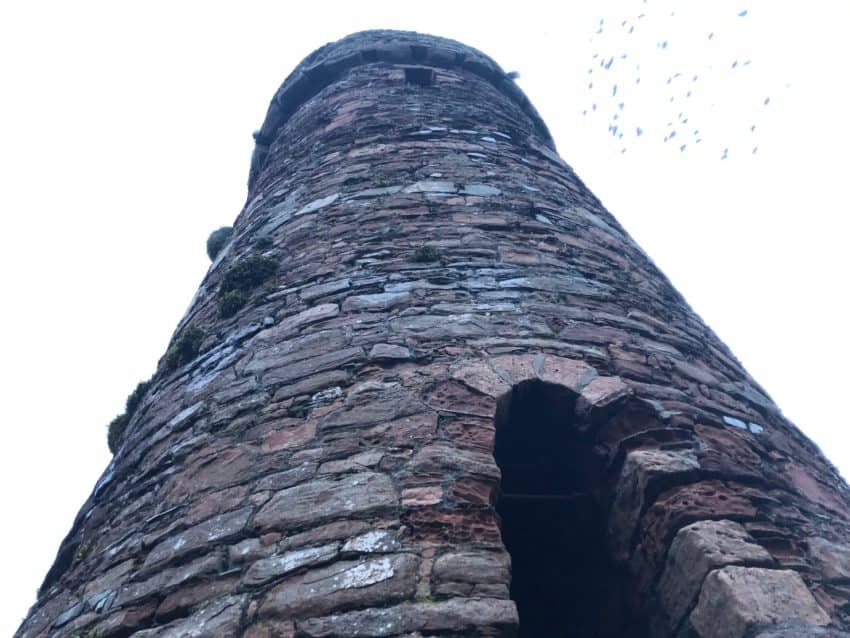 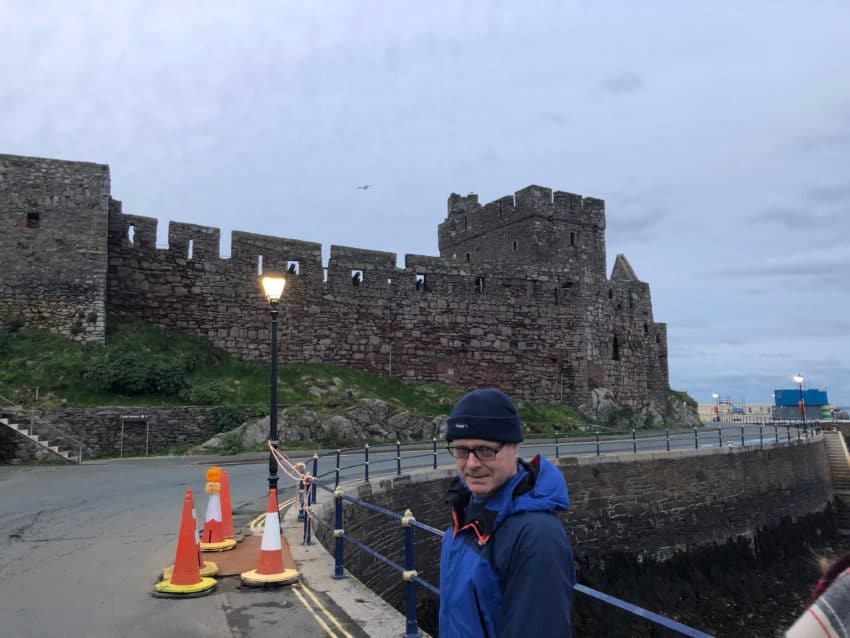 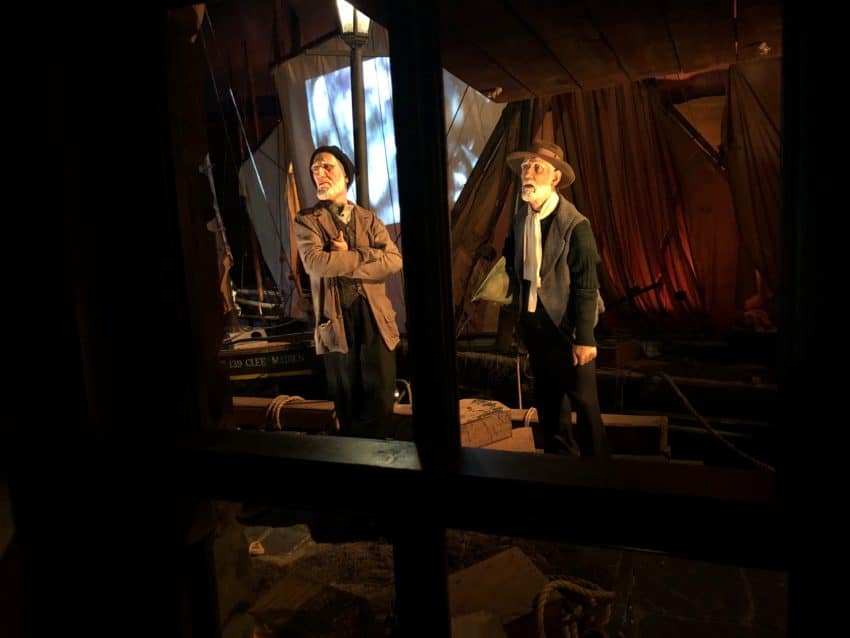 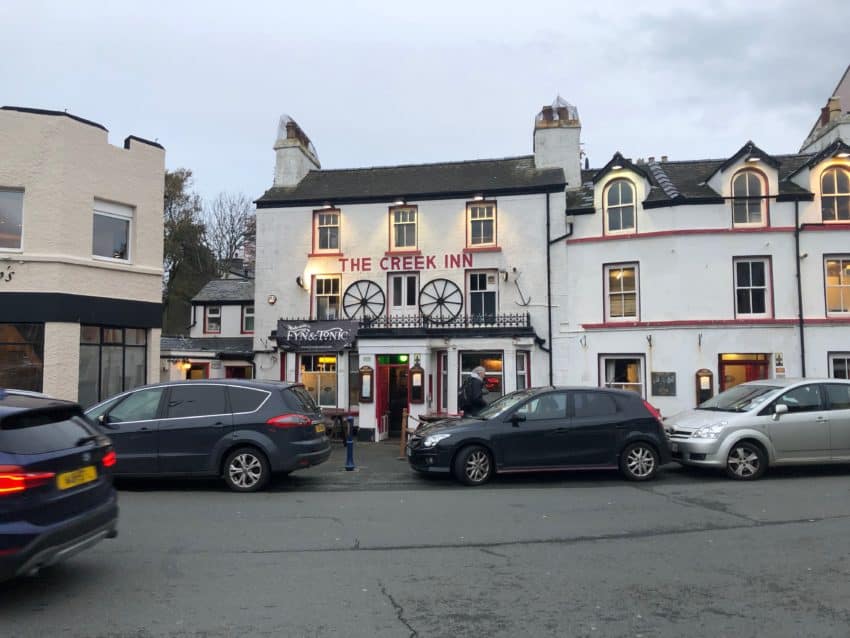