Indonesia: Bali After the Bombings

Bali After the Bombings: If travelers decide to stay away – the terrorists will win

After a while, you just learn to block it out.

Walking along any tourist region on the Indonesian island of Bali, you are likely to be touted and hustled. Merchants stand in the entrance of their shops, desperate to get you inside.

“You want driver. I drive. You want trip?” they’ll say while miming out the act of driving.

Big mistake. If you reply, you are simply giving them an incentive to talk more.

“How about tomorrow? Yes? We go to Ubud, and then volcano…”

“No thanks, really. I’m just going to the beach.”

“How about weekend? Here is my card…”

I had more variations of this conversation than I care to remember; cards spilled out of my pockets on a daily basis and inevitably ended up in the garbage. But as soon as you start to feel annoyed, as soon as the agitation hits, you remember why the locals are so desperate for business in the first place.

The 2002 bombing in the Kuta region of Bali, when 202 people were killed, followed by the bombings in 2005, has left the formerly popular Indonesian island holiday favorite relegated to a paradise lost; only worthy of the brave, the fearless … and, of course, surfers. Slowly the tourists have started to come back, but they are not flocking.

A Swedish woman staying at my hotel, who had been to Bali before the bombings, commented: “Isn’t it sad? It’s so quiet now – like a ghost town. It used to be so full of life…” I had never traveled to Bali before the terrorist attacks, but I could well imagine that this is not the typical Balinese spirit of old.

“Special Price For You”

I started my trip in the quieter town of Sanur – a place for families, for those who no longer feel the need to go partying and clubbing until the late hours; a place to relax… so they say. But the locals want the business, and they start as soon as you arrive; trying to strike up a relationship, trying to make an impression—

“Hello! Where you from?”

Within a few minutes of hopping out of the taxi, I was hustled into buying some new flip-flops, for which I think I paid more than double the normal price.

The next day I purchased a sarong that I had no intention of buying. “For luck yes, first customer today,” the old woman who owned the small shop had said. “Special price for you sir.” I politely declined the offer only to see the woman begin to get upset.

That is when I’d agreed to buy the sarong for a discounted price. What else can you do? Anyway, my sympathy purchase turned out to be useful for visiting temples, as you can rarely enter one without wearing a sarong.


I went to Uluwatu on the southwest of the island to see a temple scenically located on some high shore cliffs, cliffs which are overrun by wild monkeys. I saw the Kecak Ramayana & Fire Dance, a traditional Balinese musical drama. The chanting from the choir became hypnotic as the sun set below the rugged backdrop. It seemed a world away from the terrorist atrocities that we have all read about.

The next stop on my itinerary was the quieter town of Ubud. On the way, I passed a large crowd of men shouting so I asked my driver to stop. It turned out to be an authentic Balinese cockfight.

This is one way in which local men entertain themselves by putting on a few choice bets. Sharp knives are tied to the poultry gladiators’ feet before they do battle.

Animal rights’ activists will shout from their plinths about it; but really, can you compare our western ethics in such an alien environment? One of the cocks slumped over, bleeding, and money was gathered and exchanged. I left, not knowing quite what to think about it all. 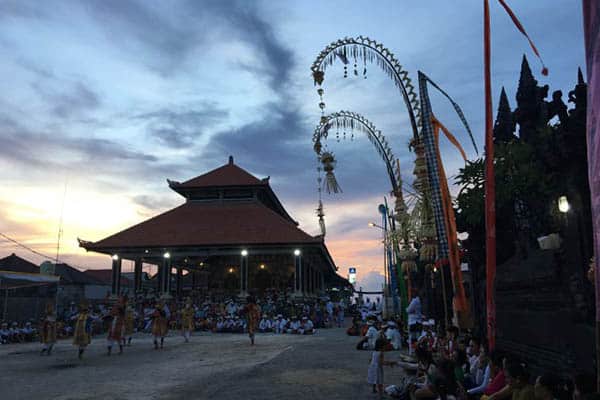 I finally arrived at my next destination – Ubud. Famous for art and craft, Ubud is a must visit to get the feel of traditional Bali.

It is situated just south of the center of the island; which means that the altitude is higher, bringing more rain, and of course – there is no beach.

It is a very different side of Bali that not everyone gets the opportunity to experience.

As you walk, familiar baskets of flowers litter the uneven sidewalks, offerings to the gods that people on Bali are so generous to.

And why is it that those footpaths are so uneven and bumpy anyway? Are the periodic holes there to entrap inattentive tourists? Is it to slow down passers-by so that they can be snared by the talents of fast-talking shop keepers?

Paranoia can take hold pretty quickly if you’re not careful. If you start thinking like that, then perhaps that would be a good time for a traditional Balinese massage.

One of the most memorable aspects of Ubud is the sacred monkey forest. Guarded by two giant stone monkey statues, the forest is overrun by, albeit, friendly monkeys who will hassle you for bananas as you stroll through. Sometimes they will even follow you and try to steal the contents of your pockets!

Next, I traveled down to Legion, just north of Kuta. The beaches here are the best in Bali, and it is busier with crowds of surfers and partygoers.

However, when you walk around the shopping areas of Kuta, most of the bars remain practically empty, except for one or two nightclubs – and the owners look just as depressed and desperate to get you inside as those in the quieter town of Sanur.

There is a huge memorial in Kuta dedicated to the bomb victims who died there; a shrine and a symbol of remembrance for the tragedies that happened.

As a post-attack tourist, it does nothing for the holiday spirit and there is still a sense of danger in Kuta; with a third bombing not beyond the realm of possibility.

Bali is still a holiday paradise, but it has become political. No doubt that almost any country you visit these days will have similar risks of terrorist attacks as Bali does – especially in big cities and tourist hotspots.

There is no really safe haven today, and perhaps if you are concerned it would be best to stick to the quieter areas, away from the crowds. But the local economy in Bali cannot survive without the tourists who have supported them for so long; so if you decide to stay away, in a very real sense – the terrorists will win.

Jason Gaskell is the editor of Oriental Tales. He is a writer and editor, currently working for a Korean publishing company in Seoul.