A rustling of leaves, then the crack of a branch. The small crowd quiets and leans forward. Binoculars are lifted towards the movement in the trees. A reddish patch of fur catches the afternoon light, and we know what we are seeing – our first glimpse of a wild orangutan.

My husband and I were in the Tanjung Putting National Park in Kalimantan, the Indonesian part of the island of Borneo. Our home for four days was the Dolphin, a cheerfully painted riverboat carrying us down the Sekonyer River, where we hoped to see lots of birds, monkeys, and, most of all, orangutans. 100,000 now live on the island of Borneo, but the island is huge, and we would have little chance of seeing them without the feeding stations.

The first feeding station was established more than 30 years ago by Birute Galdikas, a Canadian primatologist. She was one of “Leakey’s Angels,” three women in different parts of the world studying the great apes — Galdikas and orangutans, Jane Goodall and chimps, and Dian Fossey and mountain gorillas.

At the first feeding station, it feels like we are in a theater about to see a play. A raised platform forms the stage, and four rows of tiered benches the audience. Soon, in a kind of pre-show, the rangers arrive with large baskets on their backs.

They dump masses of bananas and sweet potatoes onto the platforms and issue a call, a loud high-pitched “yoooouuuu” meant to attract the orangutans. And then, we wait. And wait. And wait. We stay quiet for a while, obeying the “silence” signs nearby.

We scan the trees and stare at the stage. I whisper to my husband that if this is a play, it’s a very modern one. After a half-hour or so, we start whispering to each other and to the other visitors around us. At the one-hour mark, my husband takes a nap, and I try to meditate. Still, nothing happens. And then we hear that rustle and crack.

Climbing down from high in the canopy is a mother with an infant wrapped around her. We would later learn that orangutan babies stay attached to their mothers for five years, never letting go – a level of parental devotion that made me sorry for any complaints I had ever voiced about my lack of freedom when my children were young.

Looking around nervously, the mother lowers herself onto the platform, quickly places a half dozen unpeeled bananas in her mouth, and climbs back up. On the bench, I am rapt. I have seen many monkeys in the wild, but apes are a different story. The mothers touch their babies so tenderly, they move their bodies and faces in ways that seem so familiar, they are like us in so many ways. No wonder they are called orangutan – people of the forest in Indonesian.

Here was the plot of the play that unfolded at our first sighting. While the mother grabbed the bananas, a young orangutan — an older brother of the baby —  waited and watched high in the canopy. He would not come down to the platform, although he clearly wanted to.

When the mother and baby returned to the tree, we waited for her to share food with her older child, but she never did. We speculated that she wanted him to be independent now that she had a new baby to feed. In a tender moment that we watched through binoculars, the older brother started playing with the baby’s fingers. Mom came down twice for more bananas and some sweet potatoes, clearly a second choice, and then the play was over.

Back onboard the Dolphin that first night, we took a sunset cruise and found a large troop of proboscis monkeys by the shore. The monkeys swung wildly from branch to branch as they jockeyed for nighttime roosting position. They grew quiet, it grew dark, and we roosted too, the Dolphin tied up to a dock nearby.

The creature comforts on our boat were surprising and delightful. To our mild embarrassment, my husband and I were being taken care of by four staff members — a guide, a captain, a captain’s assistant, and an astonishingly good chef.

At each meal, plates of delicious fish and meat and tofu and vegetables appeared. And at the end of each meal, a different fruit — snake fruit, dragon fruit, papaya, watermelon, oranges. And after each hike or visit to a feeding station, snacks were waiting. Cassava fritters, anyone?

While the Dolphin traveled upriver the following morning, we sat on deck chairs on the bow and birdwatched, an activity that was richly rewarded. Over the next three days, we would see a red-naped trogon, an oriental pied hornbill, a brahminy kite, a stork-billed kingfisher, an ashy tailorbird, and a blue-naped parrot; during a night walk, we came upon a green broadbill sleeping soundly on a branch above our heads.

I should confess that the reason I know the names of these birds is that my husband is a passionate and knowledgeable birdwatcher. I am more of a fellow traveler, delighting in the beauty of the birds, whatever their names were. Despite our different perspectives, we were both thrilled by these birdwatching sessions.

At our second orangutan feeding station, we waited for two hours. Nothing happened. We were getting ready to leave when we heard a promising sound in the forest – loud and close and low.

Too low to be orangutans, as it turned out. A singular of wild boars  (yes, this is what a collective of wild boars is called) entered stage left, rooted around underneath the platform, and took off. Interesting, but not exactly what we were waiting for.

We resigned ourselves to a day without orangutans but as we walked the path towards the river, a large male started breaking branches overhead. We didn’t know why he was upset, but he was large and strong and wielding tree limbs. The rangers encouraged us to keep moving.

The Gang of Seven

The best of the feeding station plays was our last one — a richly plotted experience I titled the “gang of seven.” The rangers laid out only sweet potatoes. Since this was not the favorite food of the orangutans, we thought that no one would come. But after only a few minutes, a large male arrived, alone. The mature males look very different from the females – they’re much bigger and they have flappy cheek pouches called flanges that look like they’re pasted on.

This male did not grab food and run as the female had done. He stayed and ate slowly, occasionally looking over at us calmly. Other orangutans gathered above.

A young male was the next to arrive, and then the same mother/baby/juvenile trio from the day before, and finally another mother with what looked to be a newly weaned juvenile. As this mother swung gracefully from tree to tree, the young one tried to keep up, but the span

was too wide, and the audience on the benches watched anxiously as he tried to stretch across. The mother did not seem to be paying attention, but just as he was about to fall, she grabbed him. The orangutans did not fight for access to the platform; instead, the females waited and watched while the juveniles explored. In one hour of carefully orchestrated turn-taking, the sweet potatoes were gone.

These animals had complex lives that we were only catching a glimpse of, like the flash of red fur in the thick canopy. I wanted to know more about them and the future of their species. But what I learned was discouraging. In the last 30 years, Borneo has lost 100,000 orangutans, mostly from loss of habitat.  Find out how to help Orangutans in Borneo.

Palm oil has become a global commodity, and throughout Borneo, palm plantations have replaced the tropical forests that are home to the orangutan and other threatened species. I am grateful that I did catch that glimpse of red fur, but I am worried about what happens next for these beautiful people of the forest. 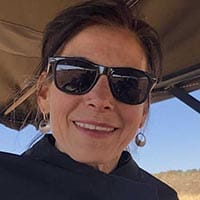 Jill Singer is a filmmaker and writer. She is rooted in the Boston area but wanders widely wherever and whenever she can.