At 13,435 feet, is the tallest mountain in Southeast Asia. 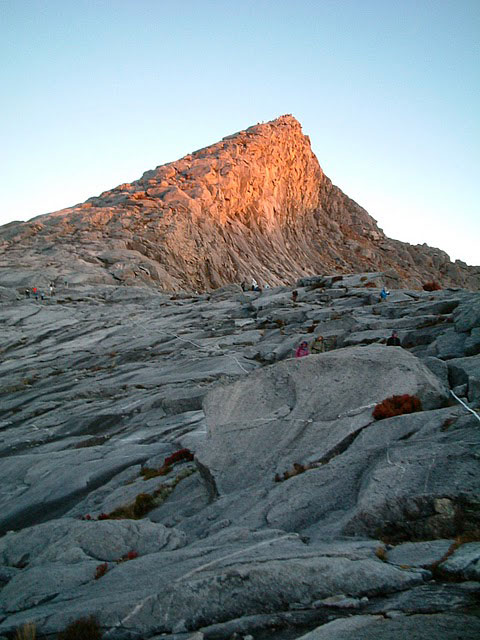 The inability to sit, stand or walk without spasms of pain lasted for at least four days after descending Mount Kinabalu, one of Southeast Asia’s highest mountains.

By the fifth day I vividly remember the euphoria at being able to go to toilet without it turning into a gruelling effort to sit or stand.

At the nearby hot springs, it is easy to pick out those that have made the 13,435 ft (4,095m) climb for their crab-like sidle, and pained expression.

Kinabalu National Park – a UNESCO site since 2000 – is one of the main reasons to visit Sabah, the smaller of two Malaysian states on the island of Borneo. But the trek up Gunung Kinabalu, as the locals know it, is fast rivalling the experience for first place, as increasing numbers of foreigners and Malaysians make the climb up the mountain, sacred to the Kadazan, the state’s largest ethnic group.

When I first caught sight of the peaks that form the summit from the park’s headquarters, it induced a reverse sense of vertigo, making me question the sanity of a novice climber scaling the jagged peaks. But I had come especially to climb the mountain, so climb I would.

Most people do the trek over two days; although I encountered two British lads that completed the whole thing in one go. Once down from the mountain, however, they had to spend the next two days in bed to recover. It is not advisable to do it on one go, unless you have just spent four months at Everest base camp acclimatising to high altitude.

Saium, our guide, reckoned it would take between four and five hours to make it up to the halfway point at 11,197ft (3415m), where we would stop for the night. At first I scoffed at his forecast, considering myself in tip-top shape to walk the four miles in a much shorter time.

The steep ascent soon made me revise my estimate, as the walk began to feel like a five-hour long step aerobics class, albeit in much more verdant surroundings, although equally as sweaty.

It turned out, naturally, that Saium was right. It took five hours to reach Laban Rata resthouse at 11,646 ft.

The first stage takes you up through lowland tropical rainforest; palms gently nod all around you while orchids and rhododendron border the trail upwards, injecting bursts of colour into the otherwise green landscape.

The park has one of the world’s richest varieties of orchid with over 800 species, as well as 600 types of ferns and 300 of rhododendrons, not forgetting some of the only varieties of the delightful pitcher plants.

Pitcher plants are nothing like their cartoons portrayals of evil carnivorous plants. In real life they are much less offensive and substantially more beguiling. In fact plant-spotting was a great distraction to keep my mind off the pain in my legs and chest.

Most of the pitcher plans we came across were much smaller than I’d imagined them – about the size of an average thumb, and they really didn’t look like they could hurt a fly! But their prey-trapping mechanism is second to none in effectiveness.

One story has it that during the 1850s Spencer St. John, the British Consul in neighbouring Brunei at the time, found a drowned rat floating in four liters of water in one of the larger pitcher plants!

As you wind your way up, the landscape transforms into alpine forest, showcasing an array of colourful succulent plants scattered across the rock face, and eventually it turns into cloud forest.

It is a veritable feast for the eyes, even if the spirit of Charles Dickens has not taken hold of you by this point. The mountain’s climate range, with its incredible diversity of plant and animal life, is a great draw for Malaysians, too, many of whom make the hike over for the weekend from mainland Malaysia especially for the climb.

At around 9,842 ft (3000m) I soon fell into a slow but steady pace, leaving Saium with a mildly restless air about him. I soon realized it was sluggish rate that was boring him when two porters powered by us carrying 40 kilos weights on their backs.

All I could hear was the blood pumping in my ears and my breathing began to sound like Darth Vader’s, but it turns out this was literally a walk in the park for Saium.

He competes in the annual race, billed as the world’s toughest mountain race and last year he’d done it in just over three hours – roundtrip! The winners aim to complete the 13-mile (21km) course is under three hours. No wonder he was distracted.

The best part about arriving at the Laban Rata resthouse is not the rest, but the unobstructed views back down the valley. With the highest peak – Low’s peak – behind and a swirling mass of cloud 1,000 ft below, the mountaintops seemed to form the crests of the waves, giving me the sensation I was at sea. A touch of light-headedness due to the altitude may well have contributed to the sensation!

Not everyone is resting at this point, however. Saium and the other guides, who are compulsory for the round trip, gathered at a make-shift dusty pitch below the rest house balcony to play ball. As I sat listlessly watching over them in the sunset their abundance of energy made the atmosphere, inversely, all the more hypnotic.

Before dawn the next morning most of the climbers were up drinking badly-tasting coffee and stocking up on water and chocolate bars. There is a cafe at the rest house but the food – standard rice and noodles dishes – is not overly appetizing, so it’s best to take enough snacks and energy foods for the trip.

By 3 am we began to set off in small groups at staggered intervals, as the next 1.9 miles (3km) is technically more challenging and the going was slow.

At first, the path up is narrow and steep and we had to walk in single file up yet more steps, so there was a bit of a scramble to get ahead and find my own pace. An hour into the walk I realised that I hadn’t switched on my headlamp, but could see fairly well.

I looked up and was greeted, more by luck than design, with a shining full moon. The long shadows cast by the moonlight behind the peaks gave the place a kind of Kafkaesqueness about it, making me believe the local myths and legends about the summit.

Kadazan folklore has it that the mountain is the resting place of the dead, and the summit inhabited by ghosts. Kadazan guides still perform an annual sacrifice to appease the gods.

Once above the tree line you step out into a lunar-like expanse of craggy, grey rock sweeping out ahead of you, where for the first time the summit felt close. The moonlight allowed me to clearly pick out the oddly, but aptly, named surrounding peaks, such as Donkey’s Ears and Ugly Sister.

I made it to Low’s Peak (13,435 ft) at around 5.30am, 10 minutes before the eastern skies burst veins of pink into the darkness. The sunrise, not guaranteed, and the views suddenly made all the effort pale away and I felt unbridled delight.

In February I got lucky with the dry weather for the trek, but ideally the best time to climb Kinabalu is between March and April when the skies are clearest.

Two weeks after my trip, up in the state capital, Kota Kinabalu, I bumped into a fellow traveller who had climbed a week after me. She had had to endure constant heavy rain for the whole ascent and descent. Magical is not the way she described her experience, but then again she had gone up in a pair of fashion trainers and little warm clothing.

Arguably the descent was as tough as the ascent, albeit for different reasons. Once on firm ground, however, and with not a wooden step in sight, I made a bee line for some cool lemonade in one of the roadside cafes to await a minibus to nearby, and appropriately-named, Poring hot springs, where I’d already decided to reward myselft with a dip in the soothing waters.

There I fitted in nicely with the other crab-like travellers for a well-deserved soak, finally.

Laban Rata Resthouse is a bit grotty, but they offer welcome respite in the form of dorm rooms replete with sheets and blankets, and the hot showers. Book a bed in advance at the park headquarters; even though you may not sleep much the chance to rest is usually needed.

March to April is the ideal time, but you can climb throughout the year. The worst time is between November and December when traditionally the monsoon comes. 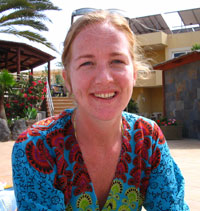 Michelle Perry is a London-based journalist specializing in business and travel.