The name Macau brings to mind bygone days of pirates roaming the South China Sea, of a mysterious mix where East and West collided and the unfamiliar could be explored. Today Macau is still a place well worth spending time and is full of mixes, both modern and mystifying, with glimpses into the colonial past.

While the growth is phenomenal, strolling the historic city center still evokes a link to the past. Macau itself needs no apology; its reputation, once tarnished, just needs updating. In 1999 Macau was handed over to China after 450 years of Portuguese rule.

Originally my plan was to see Hong Kong and then check out Macau, only an hour by ferry. I would now advise to by all means to check out Hong Kong on your way to Macau.

The days of old smoke-filled casinos and pawn shops are over; Las Vegas’s biggest players are all building big bright new ones there. I’d like to double down on their hunch.

You need not bring bags of money to blow at the tables. In fact, in my eyes, the best tables are filled with cuisine of the Macanese or dishes from Portuguese days. You can stroll the streets instead of the casinos.

Still, if you’re feeling lucky, by all means, take a chance at some of the world’s newest and best gaming places. Whatever your choice, I am willing to bet that you’ll be glad you came.

Macau is a now an SAR Zone or specifically a “Special Administrative Region” of the People’s Republic of China. Like Hong Kong, it benefits from a, “one-country-two-systems principal.” Simply put, it is easy to get there with no big visa problems and easy access is assured. That was surely evident by the number of visitors heading there via the ferry. A huge number of visitors cross over from the mainland, also. 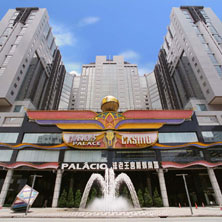 China did not acquire Macau with the expiration of a lease agreement as they acquired Hong Kong from Great Britain. The Portuguese requested the transfer.

While this caused some concern in the beginning, it seems to have worked out fine. Before withdrawing, the Portuguese made vast improvements to the city and its historic center. Their stamp on parts of Macau will be evident for many years to come.

My home base in Macau was the Landmark Hotel, which is a prime example of a modern casino hotel. It’s large at 451 rooms, all with floor-to-ceiling windows and a marble bathroom large enough for a family of four.

The prices at the large hotels, due to the growing number of available rooms, are quite reasonable. After finding my way out of the large bathroom, I found my way to the nearby Largo do Senado (Senate Square) the heart of old Macau.

In all of Asia the Largo has a reputation as one of the most charming. It is well deserved. The surrounding colorful colonial-style buildings masterfully blend with the black and white stone tiles that make up the square. Sitting on benches and enjoying the area seems to be a big Macau pastime and understandably so. People watching and shopping are prime and I often walked there both day and night.

Nearby is the Cultural Club, housed in an old pawnshop building, a precursor of today’s modern banks called Tak Seng On. This award-winning tall fortress-style building is a throwback to the days when possessions and not cash was king.

Inside are various rooms covering the past such as Water Tea House and the Arts Plaza where items can be bought. Best is the Jin Yong Library, named for the most popular contemporary Chinese author today. His novels delve into philosophy, medicine and history and are available in Chinese and English.

With the knowledge that the past is found easily in Macau, I headed to the Sands Casino for a prime steak dinner. Walking between modern and past was proving very easy and I liked it.

Perhaps because of the decadence of prime steak or because I was in need of a cultural fix, I headed to the A-Ma Temple. This Taoist oasis is one of the most picturesque temples in Macau. The smoke from the followers’ joss, or incense sticks, floated up the hillside that rises from the waterfront and permeated the air.

The temple on this site was there before the Portuguese arrived in the 1400s. Many from mainland China come here to pray. The vibe is wonderful, and walking to the various sites is invigorating.

The most active and historical temple in Macau is Kun Iam, the place China and the US signed the first treaty between the two countries in 1844. It is also the busiest temple in town, perhaps because of the ancient banyan tree know as the Sweetheart Tree. Inside there are pictures of the departed with offerings of their favorite things. It is also a place where the paper icons are burnt so they may meet the recently departed.

To mix things up, the Old Protestant Cemetery is a peaceful place to reflect on those sailors who never made it back to the West. Before 1821 there was no place to bury Protestants because church law forbade interning them on hallowed grounds. Many were clandestinely buried in unmarked hills. Among the tombs is that of Robert Morrison, the first Protestant missionary to China and author of the first Chinese- English dictionary.

One Small Step for Mankind
Picture yourself stepping off the 58th floor of the world’s 10th tallest freestanding building and living to tell about it. You can at the Macau Tower and Convention Center. It is called, “The World’s Highest Commercial Decelerator Descent,” and holds the Guinness World Record.

As the wind whipped by I was strapped into gear and jump suit. The line runs 746 feet (227 meters) to the ground you’re falling at 47 mph (76 km/hr) and you will never forget the rush. It is the tallest jump of its kind in the world; the second is in Auckland. If climbing is your thing, do the mast climb. It takes two hours and is only for the fit and brave.

No matter what you decide on, a meal at the Tower should be mandatory. I chose the Lua Azul with some superb Dim Sum and elegant setting. The 360-degree café offers the highest dinning in Macau with views over the city and Pearl River Delta.

There is no doubt that much of Macau’s income is tied to gambling but, hey, isn’t it the same for Las Vegas and Monaco? The point is that the days of smoky old casinos are changing into the card Mecca of Asia. The Sands opening led the way for modern wagering.

The Venetian, Galaxy and Wynn groups will all be opening soon and most on reclaimed land, leaving the old Macau in peace. It is expected that Macau will come close to the US$7.5 billion collected in Las Vegas last year.

One “must visit” is the Lisboa, a gaudy but pleasing landmark known as the wedding cake that was opened by Stanley Ho, the “king” of the island. If you came by ferry, thank Stanley. The newly opened Fisherman’s Village will keep those who cannot gamble busy. Other modern options are the Grand Prix Museum and greyhound racing at Macau Canidrome. Win or lose, relax the next day back in the old Macau.

So Much More
While I was amazed at the controlled growth, I often found myself exploring places such as the hilltop Sao Paulo Church, Monte Fort, Guia Hill and the Taipa Island. Gardens, museums, and history are around every corner, and getting lost is highly recommended. Some of the little back streets you will find will fill your thoughts long after your visit. Become a part of the mix of East and West, you will not be the first or last, some places just adjust better than others.

I flew non-stop from JFK in NY to Hong Kong on Cathay Pacific Airlines. It took around 18 hours but was quite pleasant. The service and entertainment were great and the flight very doable. Cathay consistently rates well on surveys.

Ferry travel from Hong Kong was easy and frequent and takes about one hour. Two companies that provide service are Turbo Jet and New World First Ferry. The cost runs around $18 to $24 depending on the class.

For the best site to plan your trip go to macautourism.gov. There you will find info on lodging, shops, sites, and dining.

The Landmark Hotel is a fine place to hang your hat and relax. It has 451 rooms and just about any amenity you could want. It is about ten minutes from the ferry terminal and the same from the old city center.

Henri’s Galley
On the waterfront’s southern end. Been there forever with good reason. Phone 556 -251

Lua Azul at the Tower
Fabulous Chinese cuisine with in an elegant setting. Best Dim Sum in Macau. Phone 988-870

The Macau Tower
Loads of fun and great views of Macau. This is an adventure packed zone.

The restaurants are all new, modern and good.

Erie Canal Towns from Troy to Tonawanda
Sveti Stefan, Montenegro: Jewel of the Budva Riviera
Way, Way Down Under: Antarctica
Peer into Into the Past: A Whirlwind Tour of Prague
France: My Last Summer in Paris
Turku and Helsinki, Finland: A Tale of Two Cities in a Young Republic