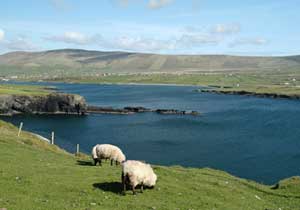 The last time my husband and I traveled to Ireland was for our anniversary, and we definitely wanted to be alone.

If you’re like me, and big cities aren’t your style, I recommend self-catering. It can be a lot cheaper than a hotel, and you get to live like the locals do—even if it’s just for a week or two.

Ireland’s Not That Big, Is It?

We landed in Dublin on a Saturday afternoon in May. The weather was uncharacteristically beautiful, with white clouds dotting a clear blue sky. We picked up our rental car and began the journey to Valentia, an island off the coast of County Kerry and the location of our rental cottage.

The drive was much longer than we had anticipated. In America, we’re used to wide, straight highways and steady speeds of at least a mile a minute. But Irish roads tend to wander around sheep pastures and rock outcroppings.

Starting as late as we did, the 220-mile journey was an overnight trip. But we didn’t mind the slower pace. We got to stop in Adare, where the main road has thatched-roof shops and cafés on one side, and a 13th-century church on the other. It was Sunday, so parishioners were flocking to the church in town while farmers wore their best suits to the fields.

We paused only briefly outside of Killarney to look at the morning mist. The road to Cahirciveen, the mainland town opposite the north end of the island, was cut into the side of mountains surrounding Dingle Bay and offered stunning views of Dingle Peninsula. The rain-heavy clouds cast a blue light on both land and sea, but when the sun broke through its beams were pure gold. 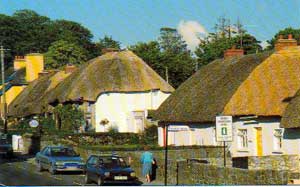 At Caherciveen we caught the ferry to Valentia, an island about 7 miles long and 3 miles wide, bordered by Dingle Bay to the north and Portmagee Channel to the south. It has a grand old slate quarry on the northeast end of the island, an isolated lighthouse and granite challenging the angry Atlantic on the north shore, and glorious, crumbling cliffs to the southwest.

Knightstown, on the eastern end of the island, is a lovely village with shops, pubs, and restaurants all along the main road. As we had limited funds, however, we skipped the restaurants and bought provisions at Caherciveen’s Centra supermarket.

After we found Mr. Peter Cahill, our landlord for the week (no small feat, as roads and residences are only sporadically labelled in rural areas), we stopped only briefly at our “cottage.” It was actually a lovely little house in Chapeltown, with two bedrooms upstairs and a sitting room, bathroom, and eat-in kitchen down. We were directly across from the church and only steps away from the town pub, The Ringlyne. 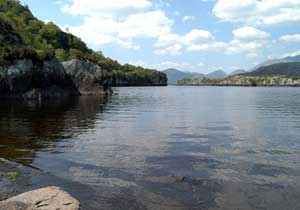 We just wandered the island at first, turning into any road that looked interesting or promised a reward like a holy well or a monument. Our little Nissan wasn’t the best vehicle for travelling some of those roads, especially the one that claimed to lead to St. Brendan’s Well. After inching our way over potholes bordered by swampy ditches on both sides, we decided that the well, no matter how holy, wasn’t worth the trip. My husband executed a beautiful 23-point turn, only getting stuck once, and we headed back to asphalt.

Our next stop more than made up for that frustration. On the island’s north shore, we saw a lighthouse at the end of a curvy road we were determined to reach. Once we did, we spent an hour lying on the springy turf, picking wildflowers, and scrambling over the huge granite slabs that formed the island’s shore. We saw colonies of tiny shellfish clinging to the rocks, bladder wrack (seaweed) growing in tide pools, and Dingle Peninsula far across the water.

The Rings of Kerry 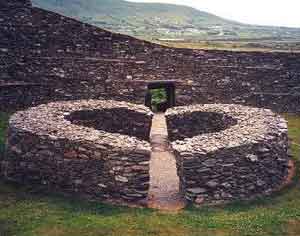 Every morning we watched the mist bubble along the ground, then lift slowly up the hill. One day we took the famous Ring road around Kerry, and soon found ourselves winding up a mountainside in thick fog. As we drove on, the fog gradually lifted, making us glad we were driving on the left: we saw the nasty drop-off to the right. But the now-familiar blue, grey, and gold of sea and sky made the scary drive worthwhile.

Another famous attraction in that corner of Ireland are the Skelligs—small, rocky islands where monks once lived in stone huts. But because the Skelligs themselves were a tourist attraction we avoided them, and followed the not-so-famous Skellig Ring Road.

We found ourselves in the tiny village of St. Finan’s Bay, one of the many Gaelic-speaking communities found all along the west coast of Ireland. There were children in bathing suits splashing in the surf, so we decided to join them in what we soon discovered was very cold water. But after a while our feet became numb and we didn’t mind the cold anymore.

When the tide began to come in, we moved on. We drove back to Valentia by way of Cahirciveen, stopping along the way at the ruins of Ballycarbery Castle and the ancient (9th- or 10th-century) Cahergall and Leacanabuile ring forts.

I have nothing against hotels, but for this trip it just made sense to self-cater. We got a whole house to ourselves, a cozy turf fire, and blessed—for parents of a two-year-old — peace and quiet.

The cottage we stayed in can be seen on the Shamrock Cottages website (see County Kerry, #166 Chapeltown, Valentia Island). The weekly rental price for Mr. Cahill’s cottage ranges from ?168-?298 sterling, depending on the season. We paid under ?200 for a week’s rental, we paid the owner directly for electricity (about 20 euro), and Shamrock reserved our car for us at about ?30/day.

We’re already planning our next big anniversary trip, and combing the Shamrock Cottages listings for the perfect place to stay.

Sarah Kretz McDowell is an Hibernophile and adjunct professor of English at Augustana College in Rock Island, Illinois.

Love Ireland? Take dozens of travel articles to go on your Kindle with our Ireland Plane Reader.

Istanbul: Living on the Asian Side
Riding the Rails in the Upper Rhine Valley
Going Dutch: A New Dimension in Travel
Paprika from Extremadura in Spain
Luxembourg: 48 Hours of Fun
Party in Paraty, Brazil