The Worcester Renaissance: An Exciting City in Central Mass

Are you thinking of somewhere fun and different to spend a Massachusetts weekend? Somewhere with a new and enthusiastic vibe? A place bursting with entrepreneurial vigor? Think Worcester!

We recently spent two days exploring the downtown happenings in this second-largest Massachusetts city, and only got a glimpse of all that’s new and exciting.

Now, thanks to hard work and a tasteful renovation by owner Dino Lorusso, the building hums with activity at Birch Tree Bread, a restaurant and brewery, Bedlam Books Cafe, Seed to Stem, “a lifestyle and plant boutique”, and Crompton Collective’s antiques and gifts.

Over coffee with Dino at Bedlam Books Cafe, I learned the 95,000 sq ft building now houses 20 retail spaces, six apartments, and soon nine condos. Dino said he “loves the Canal District and its good chemistry.” He transformed the building “with no grants or help from the city” he said proudly.

And everyone here is excited about the next big thing–an indoor public market complete with a new beer garden, that will be opening up this fall at Kelley Square, the home of the city’s and the state’s most dangerous FIVE-WAY intersection!

We walked across the street to the Table Talk Pie Company. In their tasting room Caitlin Enck, Pie Store Manager, told us Table Talk is in its third generation of family ownership, started in 1924, and currently has 300+ employees. All those employees are kept busy making 6 million pies a week.

These tiny pies surely have satisfied many generations of Worcesterites, diminutive in stature but packing a delicious punch.  And they’re only $2 each!

Worcester’s Canal District is a walker’s delight. Stephanie brought me next into the must-see Mechanics Hall, 321 Main Street, a stunning concert hall. They don’t make buildings like this anymore.  And I’m told the acoustics are world-class–so much that famous singers like Enrico Caruso, Ella Fitzgerald, and even author Mark Twain have performed here.

Next door to the Mechanics Hall we met Joe Demers, owner of Joe’s Albums. In a neat and tidy store with high tin ceilings, Joe sells record albums.

Joe said, “I went into my basement one day and pulled out all my old albums and fell in love with them again.” He said about half his albums are used, half new.

Maybe you want to listen to some albums but long ago you got rid of your turntable? “No problem,” Joe said, “We will sell you a turntable too.”

Our next stop was my favorite, the Simjang Restaurant, 72 Shrewsbury St.  A former Buick dealership, with very high ceilings, huge windows and lots of Buick mementos, it makes for a fun spot. The food sizzles with delicious flavors that were new to me. I tried the bibimbap, which is fried egg, crispy rice, kimchi, and gochu vin.

“How do you know so much about oysters?” I asked.  She said she has an “underlying passion for oysters.” I guess so – she worked for two years at the Island Creek Oyster Farm in Duxbury before her move to Worcester.

And she, like so many people we met here, has a passion for her new home of Worcester. “I am head over heels in love with Worcester,” she says with enthusiasm.”The vibrancy and energy in Worcester are so infectious now” she says.

Many of the Worcesterites we met were excited about the new baseball park being built right downtown, which will bring a minor league team representing the beloved Boston Red Sox.  The name just might be the Woo Sox, we were told.  The park should be open in 2021, along with streetscape repairs that will improve pedestrian areas and parking.

The very popular Wormtown Brewery adjoins Simjang. Josh Suprenant, Assistant Tap Room Manager, supplied us with a sampling of some of the many Wormtown beers.

He toured us through the “Brew Deck” where many of the 40 employees were busily brewing in huge stainless steel tanks.

Our whirlwind tour brought us next to the Ecotarium, 222 Harrington Way, a science and nature museum. I enjoyed the Ecotarium for its relative peace and tranquility.

Forty-five acres of nature trails complement the live animal habitats and a digital planetarium. You will want to meet Salton and Freyja, two mountain lion siblings orphaned and rescued from a wildfire at Half Moon Bay, California.

And if you love bicycles as I do, check out the exhibit, Gear Up:  The Science of Bikes- running through 2019.

Next a quick tour of the newly renovated train station in the center of town. Another must-see spectacular building.

Union Station, the name for this and for dozens of other railroad stations across the country, is a high ceilinged edifice of a building.

It is the western terminus of the Massachusetts Bay Transportation Authority’s Framingham/Worcester commuter rail line, with inbound service to Boston, and an Amtrak station.

The ability to take commuter rail right into Boston has propelled Worcester like so many other cities, into a sweet spot.

With housing prices far, far lower than Boston, it’s creating a new generation of happy commuters who can enjoy the best of both worlds, working in the city living here in the lively burbs!

Time to relax! A swim and hot tub at the Hilton Garden Hotel downtown was just the ticket.

But not for long. We made the short walk to Deadhorse Hill Restaurant, 281 Main, for dinner.

We told our server Patrick how much we enjoyed Simjang for lunch. We were pleasantly surprised to learn that Deadhorse Hill, our elegant American fare dinner spot, is owned by the same owners as our Korean luncheon Simjang. After a cocktail, chilled perfectly, we could not decide on a dinner choice from all the entrees.

My friend Max said to Patrick, “how about if you bring us your favorite dishes.” That was a good idea and it made it simple for us. We were very happy with Patrick’s choices.

Our Worcester day was still not over. We enjoyed a scenic downtown walk through the Worcester Common Park where we viewed the famous sculpture “Turtle Boy” also Worcester is known for their huge outdoor murals.

Nobody in Worcester can really explain what this bizarre bronze depiction of a boy holding a turtle signifies, but it’s famous enough to be the inspiration for the name of the city’s most popular and notorious blog, Turtle Boy Sports.

The many murals surprise and delight around every corner. The city is the home to an annual celebration of street art called Pow! Wow! Worcester, it brings artists from the world to Worcester.

Our next stop: The Woohaha Comedy Club, 50 Franklin Street. We settled in at the comfortable 126-seat theater where four comics performed in 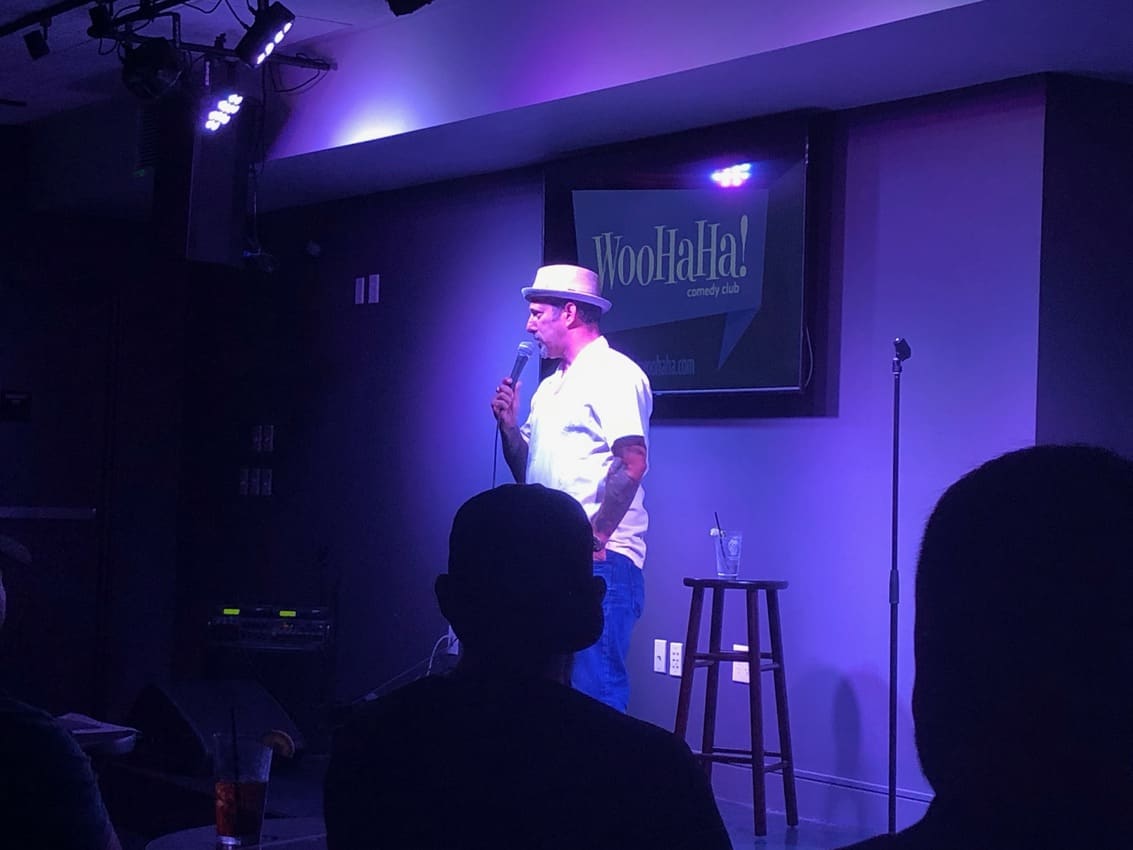 quick succession.  Each comic was laugh out loud funny. One guy, a janitor at a local school, told us hilarious stories from his work and home life. I intend to go back.

On Sunday morning, with the return of my appetite, brought us to Livia’s Dish, 1394 Main Street. I knew we were in someplace special — a full parking lot and even a parking attendant who helped us find a spot down the street.

We grabbed one open table. While enjoying a hearty Sunday brunch I chatted with owner Oriola Koci. She and her husband Mehillaj, both immigrants from Albania, opened their second Worcester Restaurant, Altea’s Eatery, 259 Park Avenue, in 2016.

Altea’s offers “American food with a French twist,” Oriola says. The restaurants are named after their daughters Livia and Altea. Here is hoping this hard, hard-working couple has more children so Worcester will get more great restaurants.

While I saw quite a bit, I think about so many other places I want to come back to Worcester to visit. Blackstone Gateway Park, 15 McKeon Road, is a new park by the canal with trails and footbridges and a new visitor center. Purgatory Chasm State Reservation is a state-owned geologic preserve in nearby Sutton.

The Blackstone River bicycle path is under construction running from Worcester to Providence.

The city is abuzz about the coming of the new minor league stadium and Woosox Baseball Team and the large new Brew Beer Garden opening at the public market.

And the most exciting development is a multi-million renovation of the Worcester Auditorium, see box above.

Go Worcester! See you at a Woosox game!

Our visit to Worcester was sponsored by Discover Central Mass.org, but the opinions expressed are the author’s own.

Jack Dunphy is a real estate investor and avid outdoorsman who lives in Greenfield MA. He loves to kayak, bike and explore history in New England.