Most people associate Cape Cod or Provincetown specifically with summer. Right now, you are most likely picturing days out in the hot sand swimming and fishing.

You picture strolling down the busy, narrow Commercial Street waiting in long lines at shops and restaurants.

Our first trip to Provincetown was in October. Visiting off-season, on a windy, drizzling Saturday, I obviously didn’t go swimming and didn’t lie out in the sun.

As the rain rapidly increased on the long drive there, I got antsy wondering what would be there to do in the rain, in October. I mean what else is in Provincetown besides beaches?

A Town With Everything

The answer turned out to be… everything! Yes, Provincetown really has something for everyone, whether it is the arts, biking, whale watching, or boating.

Yet, no matter what you choose to do or not to do, there is one thing you can’t escape — Provincetown’s open-minded community.

“Everything goes, we are totally non-judging,” says Rick Valentino, a restaurant manager I met. The more time I spent and the more people I talked to, the more I began to really understand this concept.

First off, it was “Leather Weekend.” This means that the majority of the locals, if not all, were dressed in leather apparel and accessories.

This theme wasn’t just limited to jackets. Men were dressed in leather chaps, jocks, shirts, you name it — someone had it and it was leather.

As my friend Allie and I rode down the street before even checking in to our hotel, we both commented on the breath of fresh air we felt when seeing people so openly express themselves. Since both of us are originally from a suburban Connecticut town, it was a new experience.

Not A Mainstream Accommodation

We checked into the Somerset House Inn. We were greeted by a man named Bob wearing an “I love Jesus but I like to drink a little” T-shirt.

This bright purple house adorned with flowers set the ambiance for an energetic start to the trip despite the rain.

We went up two sets of spiral staircases and into the room which Bob called “the treehouse room,” because it’s so high up.

Out on the observation deck right next door to the room, we had the perfect view of Provincetown bay.

The Somerset House Inn was much more than I expected. I’ve never had the enjoyment of staying at a non-chain hotel.

I was expecting just a vanilla, traditional hotel with white walls and Claude Monet paintings, management dressed in uniforms, and slow elevators to each floor. The Somerset House Inn has just the opposite!

Each wall was a different color with each of the 14 guestrooms set up differently. The working fireplace in the room provided a cozy feeling. Nothing in this quaint, adorable inn was uniform or commercialized.

We set off to explore the town. Looking around, I could tell we were probably the only non-locals. As we walked around with cameras instead of umbrellas, ready to capture everything, I noticed all the men in their leather and families walking their dogs.

We checked out the bay first. Boats were idle in the sand and the water was vacant of people. We walked across the sand anyway, admiring the dark, clear ocean.

We explored all of Commercial Street and noticed that many of the shops and food stands are closed until next season. This still didn’t deter the residents from having fun.

The street was packed with people on bicycles, people walking dogs, and people sitting and chatting on restaurant or coffee shop patios.

Valentino says, “Off-season is our summer. It is when we have our cocktail hours and dinner parties. It’s when we don’t need to work 16 hours a day.” Valentino’s description is exactly what we were able to see: the locals trading spaces with the tourists and enjoying their environment.

Valentino is one of three locals I met outside of Ben and Jerry’s that perfectly-identified what is unique and great about Provincetown.

Valentino moved to Provincetown in 2004, after marrying his partner Rick, who has been a resident since 1992. Both commented on how community-oriented the town is, despite the fact that it is a tourist town.

“Everyone knows everybody and what everyone is up to,” Valentino said. Both describe this as a positive characteristic to the town because everyone looks out for each other.

Tony Valentino moved to Provincetown from Pennsylvania. He grew up in a religious family in a large town much different than Provincetown. He says, “My mother probably wanted to shelter me so I’d never find it out. Christian school and all — I never changed.”

Provincetown fosters an environment where nobody needs to change. Rick Valentino told a great memory of his first time in Provincetown. He was walking up Commercial Street holding hands with his partner at the time when a straight couple and their young child passed them.

“The child didn’t turn around when we walked by. It was one of the first times that had happened,” he says. This proves that locals raise their children to be open-minded and to allow for a diverging point of view. This concept doesn’t exist in many other places.

Dining at The Waterford Inn

We had a wonderful dinner at The Waterford Inn, Café and Tavern. We started the meal off with fresh tomato, mozzarella, and prosciutto appetizer.

The café provides outdoor and indoor dining. Each table features candlelight while the bright walls feature modern art paintings. The coolest thing about this beautiful café, however, is that rather than using a regular tablecloth the tables were covered with disposable white sheet paper.

Each table had a large can of crayons so that guests can doodle or jot down thoughts while waiting. Who said paper and crayons were only used to occupy children at Friendly’s while waiting for meals? Being able to write on the tablecloth provided was fun, even for grown-ups.

The Waterford Inn is excited about their desserts due to having a new pastry chef from New York, James Evangelos, as of this summer.

Many tourists highlight the nightlife as one of the town’s main attractions. After visiting the Crown & Anchor’s Piano Bar, I can see why. The Crown & Anchor Piano Bar was packed with all different types of people.

The population was made up of both the young and the old, both straight and gay. There was a good mix of males and females of all ages.

It wasn’t until being in this environment and actually hanging out with locals in such a setting that I realized what is meant by “anything goes” and “non-judging.” There was no particular image upheld by the crowd.

There were some groups or couples in leather, some in polos and khakis, a few in suits and dresses, and some in just regular old jeans and t-shirts. To the left of me was an elderly man and to the right was a 26-year-old woman in a Rolling Stones T-shirt singing and dancing along with the show tunes.

That’s right, show tunes. This bar has a live pianist every weekend.

The rain ceased for Day Two of the trip, giving us the perfect opportunity to seek out more of the beautiful landscape and atmosphere of the Cape.

After a breakfast of wheat banana chocolate chip muffins, and an omelet at Somerset Inn, we rented bikes from Gale Force Bikes and headed for the trails.


We rode five miles on the Province Lands Trail, a part of Cape Cod National Seashore Park (CCNSP), which provides miles of federally protected and preserved seashore, pond, and woods.

Variety of Scenes on the Trail

I decided that the start of fall is the perfect time to try out this trail because it feels as though you are riding through endless foliage with leaves covering the pavement. The trail offered a variety of scenery: ponds, woods, and beaches, all bathed with the special colors of New England.

The trail was in an entirely wooded area with ponds and beaches to visit in between riding through. We stopped at Herring Cove Beach where people were fishing, boating, and enjoying walks. The beach was calm and quiet.

Provincetown doesn’t experience as many hot and cold extremes in the summer and winter as many other Massachusetts towns do. For instance, they don’t get the typical bitter cold, below freezing winters or sweltering hot summers. In the summer, the temperature is usually around 70 or 80 degrees, cooled by the Atlantic breezes. In the winter, it is usually around 40. It also rarely snows.

History and the Arts

You can climb to the top of the monument and get a panoramic view of Provincetown Harbor, Cape Cod Bay, and Cape Cod National Seashore. It is the tallest all granite structure in the United States.

The PMPM museum features exhibits on the Pilgrims and maritime history, such as a white wolf, walrus, and polar bear brought back by Donald Macmillan during expeditions.

Provincetown Art Association and Museum (PAAM). featured an exhibit of modern art from the abstract and surreal to photography. The artist, Heather Hudson’s work explored fear in various ink paintings.

Commercial Street is full of art galleries, which you can pop in and visit to see the artwork up close. After having a great time at the PAAM, I really wanted to see more local artwork. We decided to check out some of the galleries.

Before returning the bikes at the end of the day, we rode through the residential area towards Provincetown’s West end. It’s hard to imagine how this 3500-person quaint town morphs into a 30,000-person summer destination. It’s hard to imagine it being packed to the gills with tourists since it’s among the most popular towns of the Cape.

Maybe the next time I visit the same beaches I walked and biked through will be packed with people. The same streets of happy locals will be full of vacationing families but I’m sure I’ll still appreciate Provincetown’s inescapably open-minded, tight-knit community. 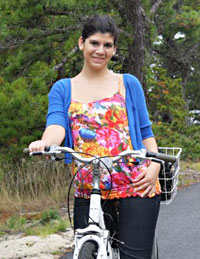 Lisa Linsley writes from Boston, MA. She is a life-skills instructor for the disabled.