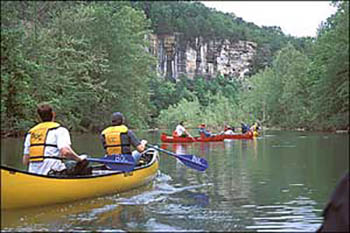 A recent trip to The Ozarks in Arkansas gave me an appreciation of a very different part of the U.S. Green, lush, full of waterfalls and gently sloping hills, we met folks who absolutely wouldn’t live anywhere else.

Few Easterners come to this part of the U.S. and they’re missing the natural beauty, a laidback lifestyle, and some of the best fishing anywhere.

Arkansas, a state of 2.7 million, is located in America’s south, north of Lousiana, and south of Missouri. Spring and fall last a long time here, and the summers can be hot and sticky.

The state is divided diagonally, with a dramatic difference in climate, people, and attitudes along a line of mountains that stretches out next to the major Interstate. To the south, it is dry, hot and rice growing takes up a good chunk of the land.

With its steamy climate and, green rolling dales and pastures, Arkansas surprised us with its bucolic beauty. The gentle slope of hills, the many waterfalls and large rivers and an abundance of grazing cattle calm the senses.

Horses often share these pastures with their beef cattle brethren. It is definitely a place where people love the outdoors. Everywhere we went in the Ozarks, there were outdoor recreation stores, bikers joggers, canoeists, and hikers.

Pastoral was a word that popped into our heads as we drove east from Northwest Regional Arkansas airport, that was built in 1997 by Big Brother Wal-Mart, which calls Bentonville home. The behemoth corporation’s impact resonates out into all of Northwest Arkansas. And that is not necessarily a bad thing. Hundreds of local charities and the University of Arkansas have benefited from their largesse.

Huge edifices such as gymnasia and business schools have been built by Walton family funds, and the University of Arkansas football stadium seats 84,000 fans, sold out for each of the eight home game in the fall.

The other big donors of the area are also mega-corporations, Tyson Foods, and JB Hunt Trucking, their influence is seen on signs on every back road where broiler chickens and turkeys are raised.  Crystal Bridges is a world-class art museum here paid for entirely by Alice Walton, the heiress.

We visited Eureka Springs a small town on a hill that attracts more than one million tourists each year. The region is dotted with hundreds of lakes, both natural and manmade, and has some of the best bass fishing in the U.S. Many records have been set casting into these waters. Eureka Springs is known as “Little Switzerland” because of its winding streets and two-story shops.

These aren’t chain stores but small boutiques offering clothing, artwork shoes, and ephemera. We found some wonderful barbecue and hot sauces in a shop

called “Silly Chile,” and had some tea in a sidewalk cafe.

Eureka Springs’ biggest tourist draw is the Great Passion Play, performed in a custom-built amphitheater that seats 4400 every year from April through November. More than 300 performers, mostly locals, dress up like Romans and Jews and reenact the last week of Christ’s life.

Along with this spectacle, there is a fascinating sacred museum on the grounds, with room after room of ancient and modern religious art from around the world.

The town is perched on a hill, like a European town, and to make things a little easier, there are tram buses that shuttle tourists back and forth up the winding streets.

Parking is difficult, so it is recommended to take the trams that run all the way up the hill to the 1886 Crescent Hotel. Eureka Springs, with 2400 inhabitants, has an equal number of hotel rooms, so there is plenty of places for the visitors to bed down.

We spent a night in this grand old hotel, The Grand Old Lady of the Ozarks, and the view of the rolling hills from the veranda was spectacular. In the distance a huge statue of Christ with his hands outstretched, this is located at the site of the amphitheater where the Great Passion Play takes place. The sixth floor of the Basin Park Hotel offered pool tables and a bar for some late night enjoyment.

The Palace Hotel and Bath House, built in 1901, is a beautifully restored small cozy place to stay and features old-style steam baths and wonderful Victorian detail. Each room is special in a unique way.

We moved on to Fayetteville an hour and a half to the south, a fun college town with a cool central Avenue (Dickson Street) and also the home of The University of Arkansas, a big state school where athletics are king. Common Grounds Espresso, a cozy coffee shop on Dickson St offered big and tasty grilled chicken salads and some strong java.

Another place worth stopping for a bite is the Flying Burrito Company, located behind the Walton Arts Center, where you have a large burrito made to order at the sandwich bar.

Mike Mills, the owner of Buffalo Outdoor Center in Ponca, (population 16) joined us at dinner and served as an articulate guide to the area. Mills has built more than 50 cabins in these woods and leads canoeists down the river between April and June. He also pilots a hot air balloon, and rents out a series of cute cabins of all sizes, many of which face the sweeping vista we first saw from the main lodge of the River Wind Lodge and Cabins.

With vaulted ceilings, a gigantic center table and a wrap around deck with great views, Mill’s Rainbow Lodge was a great base to explore more of the area. The cabins can be rented for a few nights and come out to cost less than $100 per person. They are equipped with kitchens, all the kitchen equipment you’ll need, plenty of firewood and comfy beds.

Nearly all of the Arkansans we met love to float on the Buffalo River. This 140-mile scenic river is surrounded by national parkland and offers high limestone bluffs, cascading waterfalls, and views of wildlife including elk and deer.

Fishing is also huge in the region since very large man-made lakes dot the whole Northwest. Canoe rentals, fishing trips, and swimming are all popular here in the summer.

We were planning our own float on the Buffalo River, where the clean waters, high bluffs, wooded hillsides combine for a truly sensory experience, but ten-year record floods kept the river too high to float.

We watched sadly as many of the cows got swept up in the flood after a steady rain brought the Buffalo up to dangerous levels. As the cows struggled to swim and mooed frantically, we heard a report of a man trapped on the river. He was clinging to a tree, the chocolate milky river rushing all around him, and Mills himself came to rowing to the rescue, grappling with the dazed canoeist to get him into his canoe and out of harm’s way.

It was an exciting impromptu display of heroism and strength, and a scene we’ll never forget!

The Buffalo is a free-flowing waterway run by the National Park Service, meandering 118 miles with bluffs up to 440 feet on the side and virtually no civilization intruding on the nature along the river. No dams impede the flow, and other than cows, farmers and canoeists, there’s nothing to spoil this magnificent view.

We missed our chance while in Ponca to float the river, but we did enjoy a fine 2.2-mile hike to Eden Falls in the Lost Valley Scenic area. This area, right off Rte 43 in Boxely, follows a trail on a gentle hike through thick woods leading to a 200′ cave. Bring your flashlight if you want to explore the inside.

In these lush woods, waterfalls were flowing to the right and the left, and a small campground is located near the trailhead. The end of the hike, Eden Falls, is spectacular with a 100-foot high gush of streaming water flowing down into a secluded pool. We understood why so many Arkansans are crazy about getting outdoors, to paddle, hike or bike!

One of the joys of driving through the Ozarks is what you come across by the side of the road. Once we saw a set of two Kawasaki Motorcycles, hanging from a tree next to a dented old 1930s pick-up truck.

Later we passed the Ozark Café in Jasper, with patrons mulling over menus with prices all less than $8 per entrée. No booze can be found anywhere in the whole county, so restaurant dining was cheap.

For anyone who loves being outdoors and who wants a taste of something very different from the East or West coasts, consider a trip to the Ozarks. The Natural state, full of friendly guides, gorgeous scenery and acres of water, beckons!