Delaware Water Gap: The Spectacular Wilderness Between NJ and PA

The Delaware Water Gap National Recreation Area, spanning Pennsylvania and New Jersey, is a unique unit of the national park system. It takes its name from the iconic geological feature at its southern end, Delaware Water Gap. 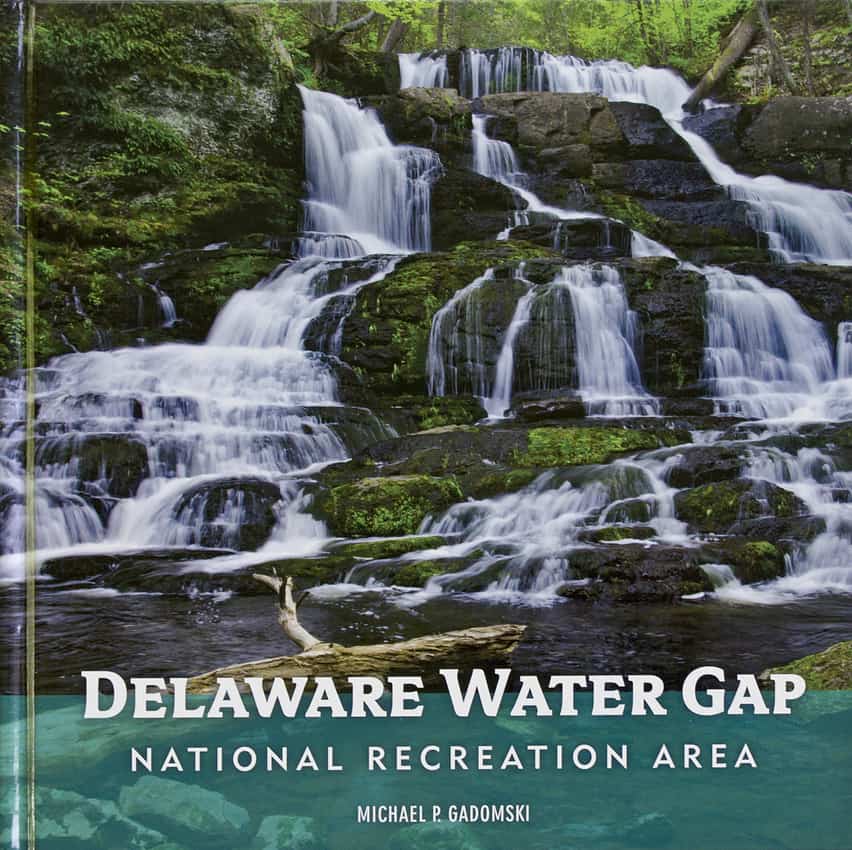 From there the approximately 70,000-acre park extends in a northeasterly direction bisecting two states and follows the Middle Delaware River, one of the last undammed free-flowing rivers in the eastern United States.

The Delaware Water Gap itself was once the second-largest resort area in the United States and identified by Condé Nast Traveler as the most beautiful place in Pennsylvania.

A new book has been published that showcases the natural beauty of this area by Michael P. Gadomski, called Delaware Water Gap National Recreation Area

Although pristine and free-flowing today, for many years speculators wanted to dam and harness the river for various commercial purposes.

After the disastrous 1955 floods caused by a rare combination of two back-to-back hurricanes, Congress in 1965 was persuaded to commission the Tock Island Dam project to dam and flood 40 miles of the river valley covering nearly 12,000 acres.

The U.S. Army Corps of Engineers was assigned the task and the Corps, through eminent domain, displaced around 15,000 people.

Years of Protests Against the Dam

After years of protests that drew national attention, new laws, and economic, geological, and ecological studies, the Delaware River Basin Commission in 1975 voted to abandon the dam project and turned all of the already acquired land over to the National Park Service to be managed as a national recreation area without the originally planned reservoir.

The book just briefly mentions the Tock Island Dam controversy. The author, like many others, feels that now after more than a half-century it is time for the park to stand on its own without the constant association to the controversy.

The park area is so much more than that one instance in its long history that goes back thousands of years.

Four Million Visitors a Year to the Gap

Today the nearly 4 million annual visitors to the park are often unaware of that controversial past.  They come to canoe, hike, camp, swim, cycle, cross-country ski, picnic, hunt, and fish.  They come for the history they find at Walpack, Millbrook Village, and numerous other locations in the park.

They come for the natural scenery, the numerous waterfalls, and to observe the abundant wildlife.  They come for the art offered at Peters Valley School of Craft or to make their own art in as many mediums and disciplines imaginable.

They come to connect with an environment that is becoming rare to so many people as the landscape is being turned over to asphalt, concrete, and steel.

They come to connect again with the natural world and themselves. And all of this is found in approximately an hour’s drive from New York City and Philadelphia.

I’m in my kayak effortlessly floating down the river as the gentle current takes me past riverbanks lined with giant sycamore and silver maple trees.

The river often curves and divides around pristine natural islands. Except for a few other kayakers and a canoeist, no other signs of human activity are in sight.

Great blue herons fly ahead of my approach, landing farther downriver. When my kayak reaches their new location, once again they repeat their short flight downriver. I look down into the crystal-clear water beneath me and see acres of yellowish-green eelgrass gracefully swaying and dancing in the current like the grass on a Polynesian hula dancer’s skirt.

Everything around me is still and peaceful. Suddenly, loud, piercing shrill breaks the silence. I look up to see a majestic bald eagle flying directly over me, heading upriver.

I’ll admit it; I’m a pretty darn lucky guy! Not lucky in the sense of finding or winning lots of money, since I never play the lottery and have actually never been inside a casino.

Every year when I get the Publishers Clearing House Sweepstakes promotion in the mail it goes right in the trash, unopened. I always buckle my car’s seat belt, try never to speed, never text and drive, and never ever drink and drive, always avoiding chancing my luck.

But I’m lucky in other ways. I can jump in my car and within forty minutes be in one of the most unique and diverse units of the National Park Service. It’s a place where I can observe and photograph lizards and a species of cactus similar to those found in the Southwest.

Plus, giant old-growth conifers (a few as old as the nation itself), glacially carved lakes, waterfalls galore (including the largest in two states), and historic sites that could fill several volumes of literature, many predating the French and Indian War.

I can then get in my kayak and float down thirty-seven miles on one of the very few remaining undammed, free-flowing rivers in the eastern United States and glide right to a geological feature that was once touted as one of the scenic wonders of the world.

I share my good fortune with over thirty million other people who live within a two-hour drive of this priceless and vital natural gem, the Delaware Water Gap National Recreation Area.

In a rare combination of three National Park Service units, encompassed within the recreation area are the Middle Delaware Scenic and Recreational River and nearly twenty-six miles of the world-renowned Appalachian National Scenic Trail.”

Michael P. Gadomski is a professional photographer, filmmaker, and writer located in the Pocono Mountains of Pennsylvania. Growing up in the Poconos he explored the nearby woods, lakes, and wetlands as a child and developed a keen interest and a love for the natural world at an early age.

While in college he became interested in photography and started to combine his interest in the natural environment with photography. He was accepted by several stock photography agencies in the 1970s and continues to supply images to these agencies today.

For 25 years he was also employed as a park naturalist and a park ranger by the Pennsylvania Bureau of State Parks. In 2002 he left the State Park Service to devote himself to a full-time photography career.

Although landscapes are his specialty he is accomplished in other venues of photography including travel, botanical, micro, agriculture, lifestyles and people. Because he takes a naturalistic approach to photography the vast majority of his subjects are illuminated in natural light.

His books include, “Wild Pennsylvania – A Celebration of Our State’s Natural Beauty”, “Philadelphia – Portrait of a City” (both the original Graphic Arts Books edition and the new revised edition by Schiffer Publishing), “The Catskills – A Photographic Portrait”, “Reserves of Strength – Pennsylvania’s Natural Landscape”, “Philadelphia: A Renaissance City”, The Poconos: Pennsylvania’s Mountain Treasure”, “Pennsylvania: A Portrait of the Keystone State”, “Scenes From the Country Fair”, “Delaware Water Gap National Recreation Area” “Philadelphia: A Keepsake”, and “Pittsburgh: A Keepsake”.

Michael is a charter member of the North American Nature Photography Association.  His website is www.mpgadomski.com.

The Delaware Water Gap is located on the New Jersey Delaware border and is full of beautiful landscapes, trees and creatures. 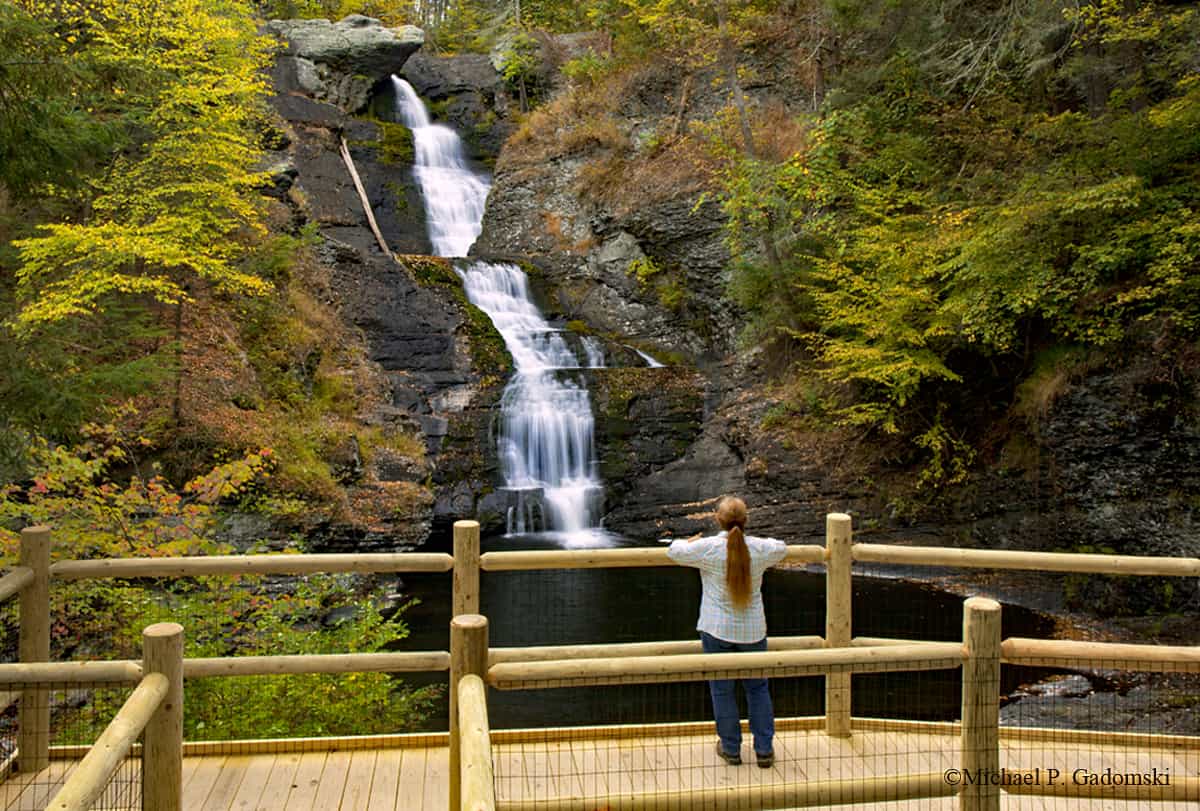 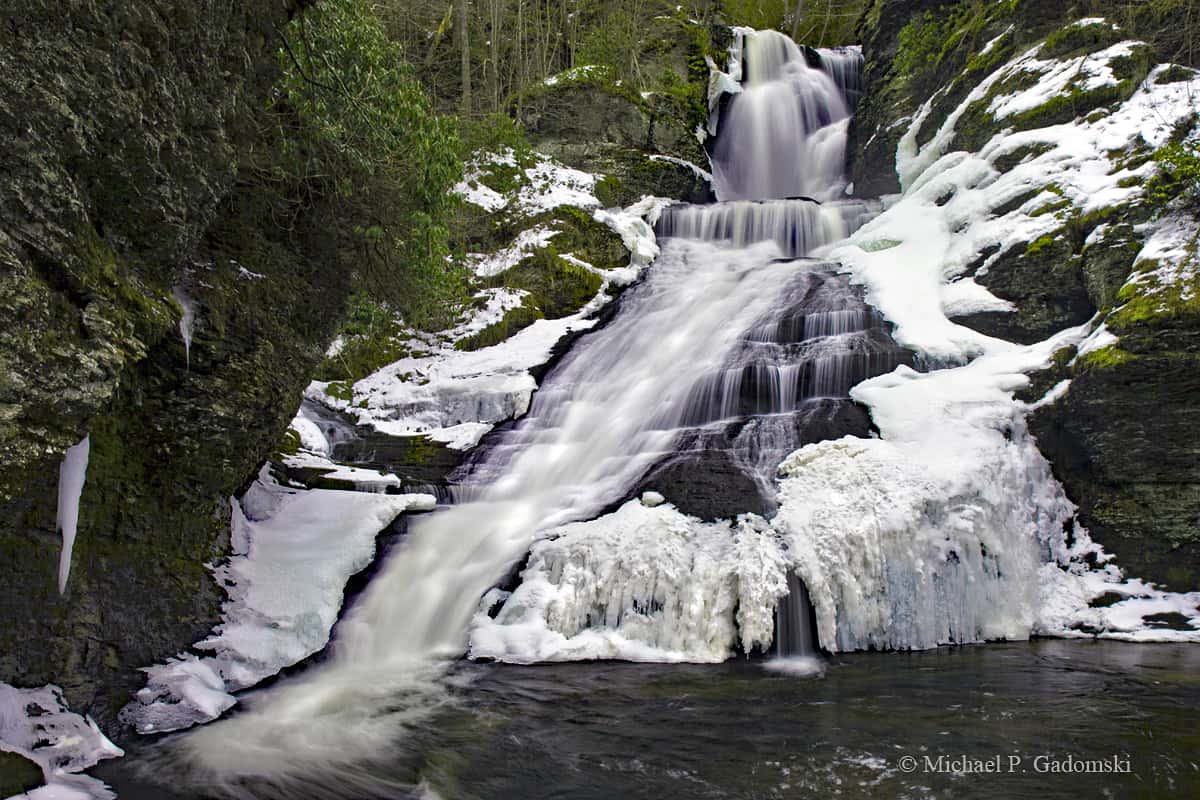 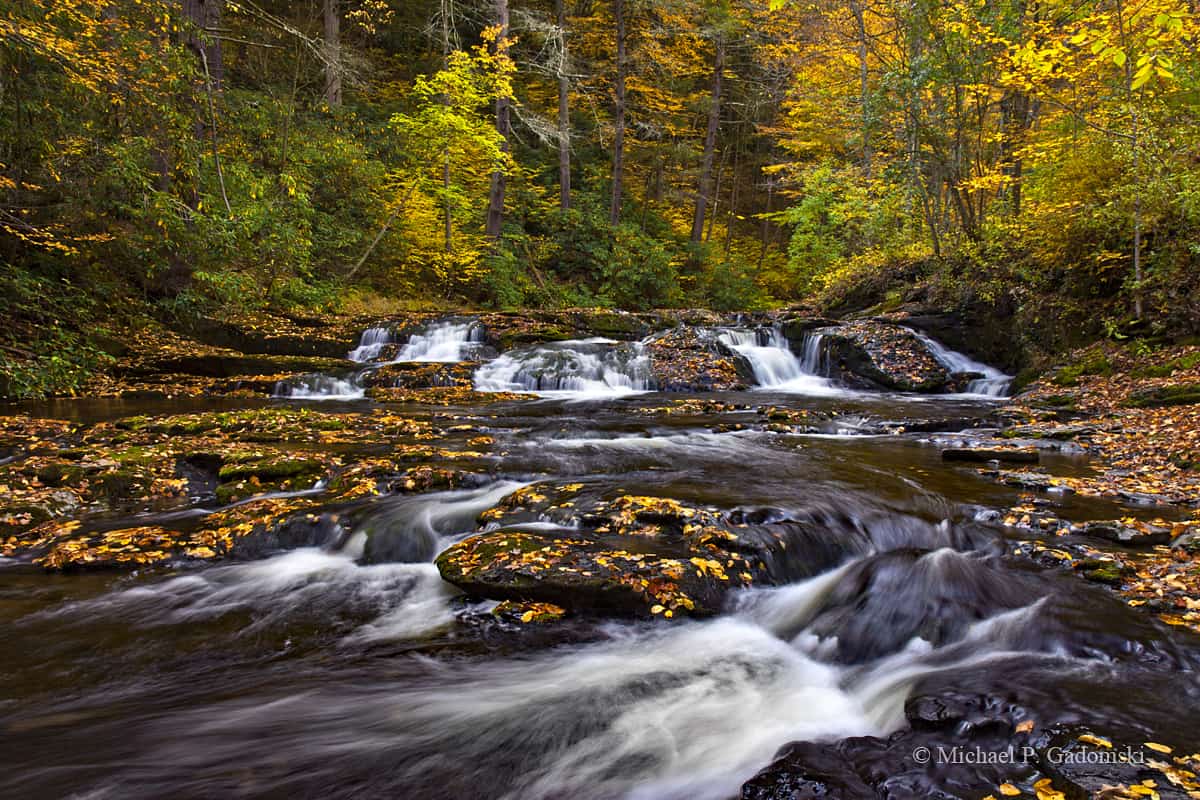 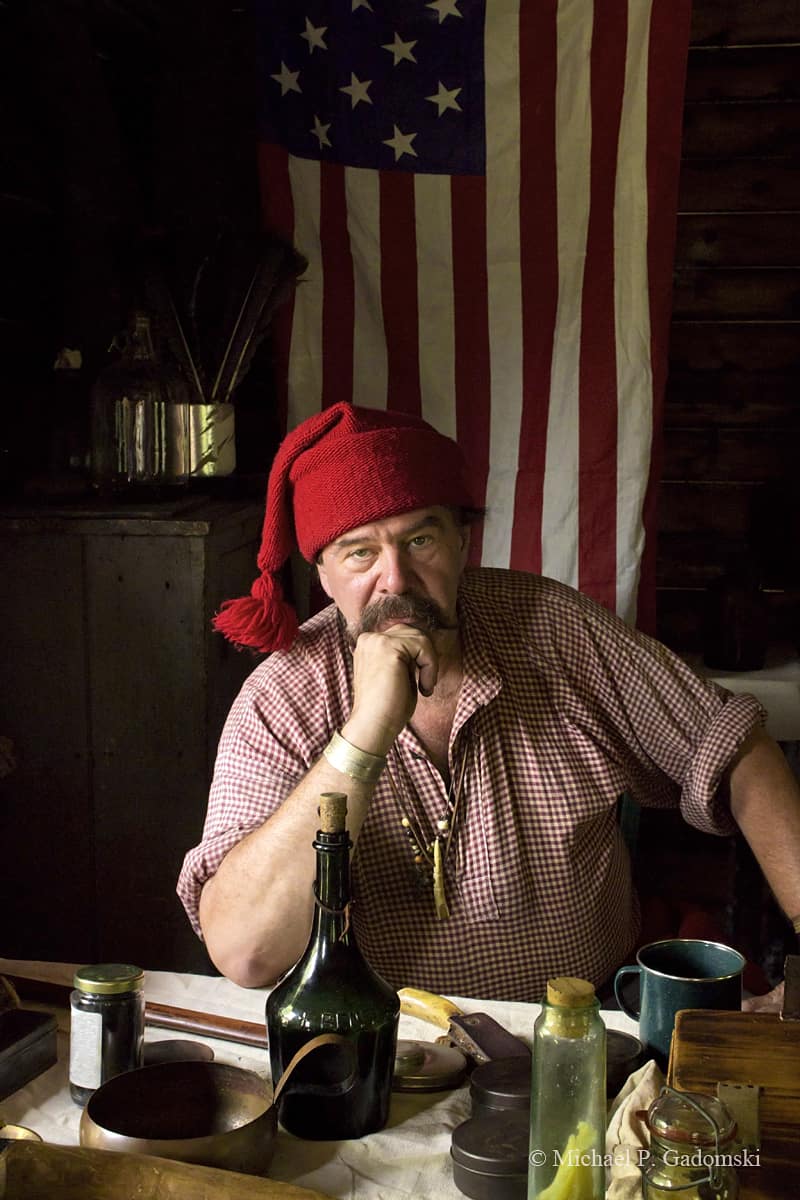 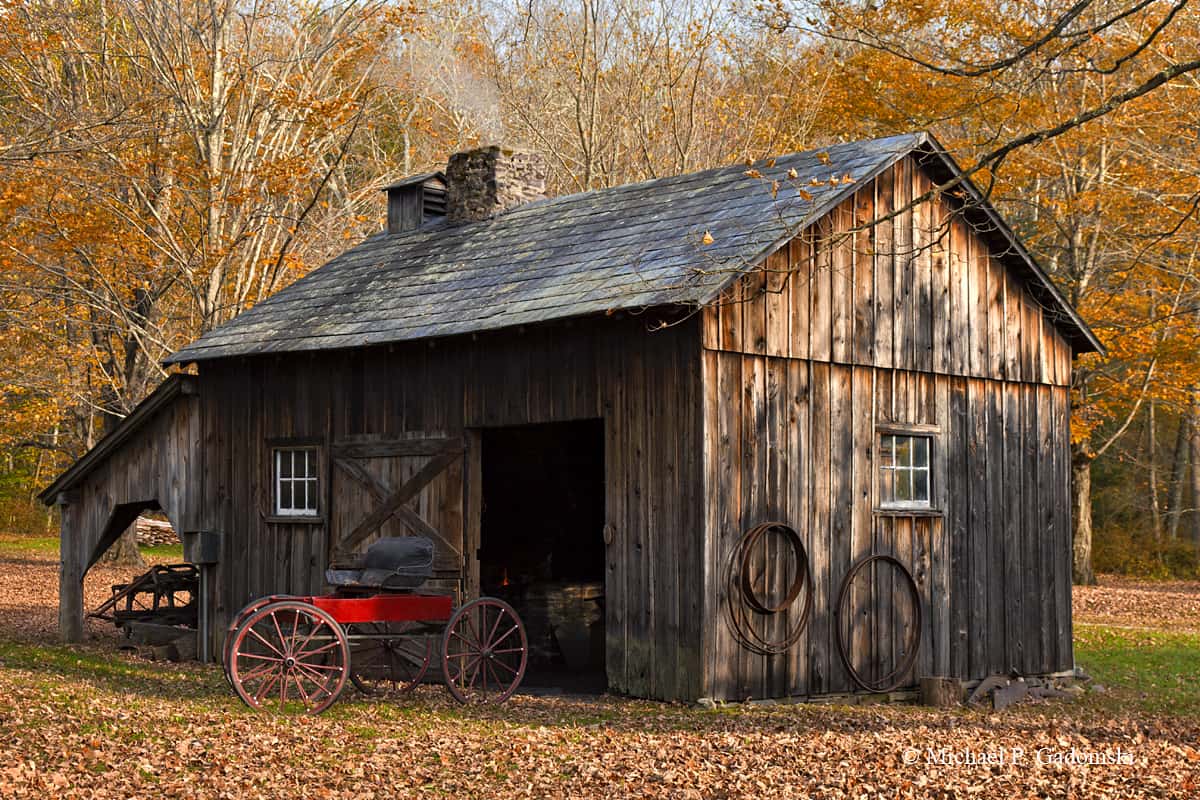 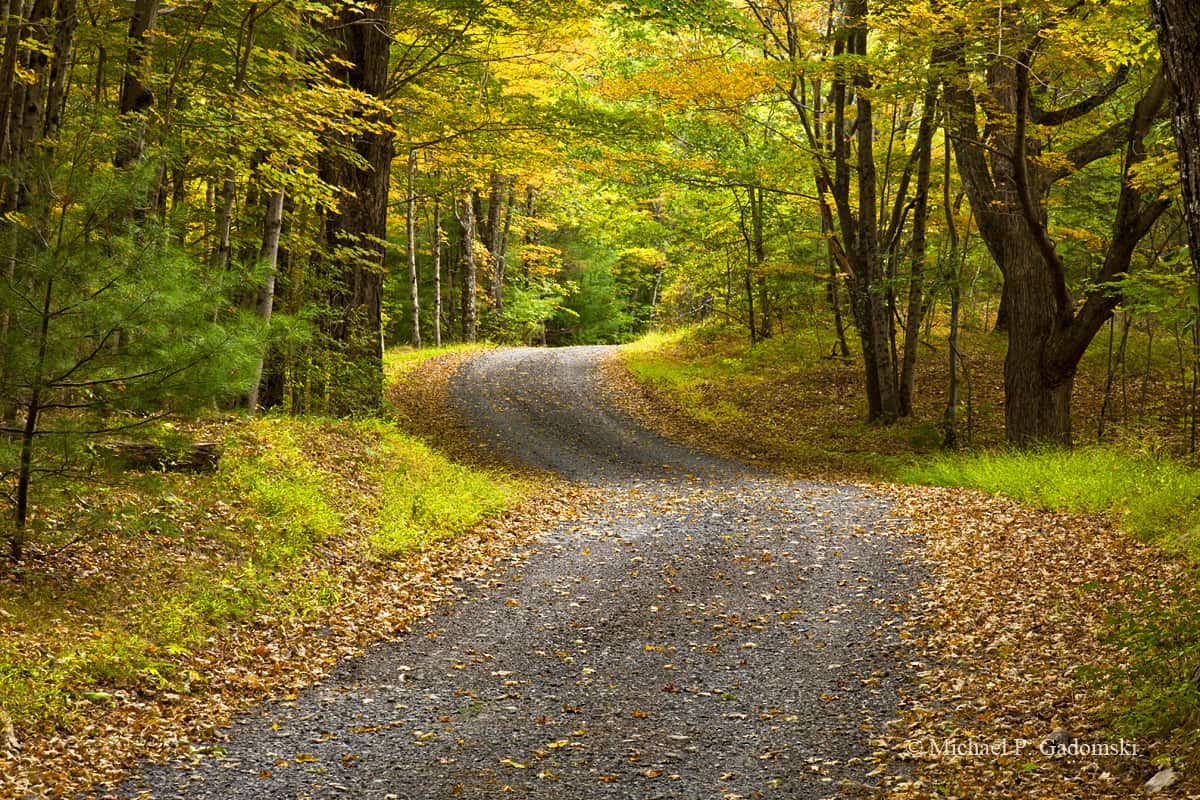 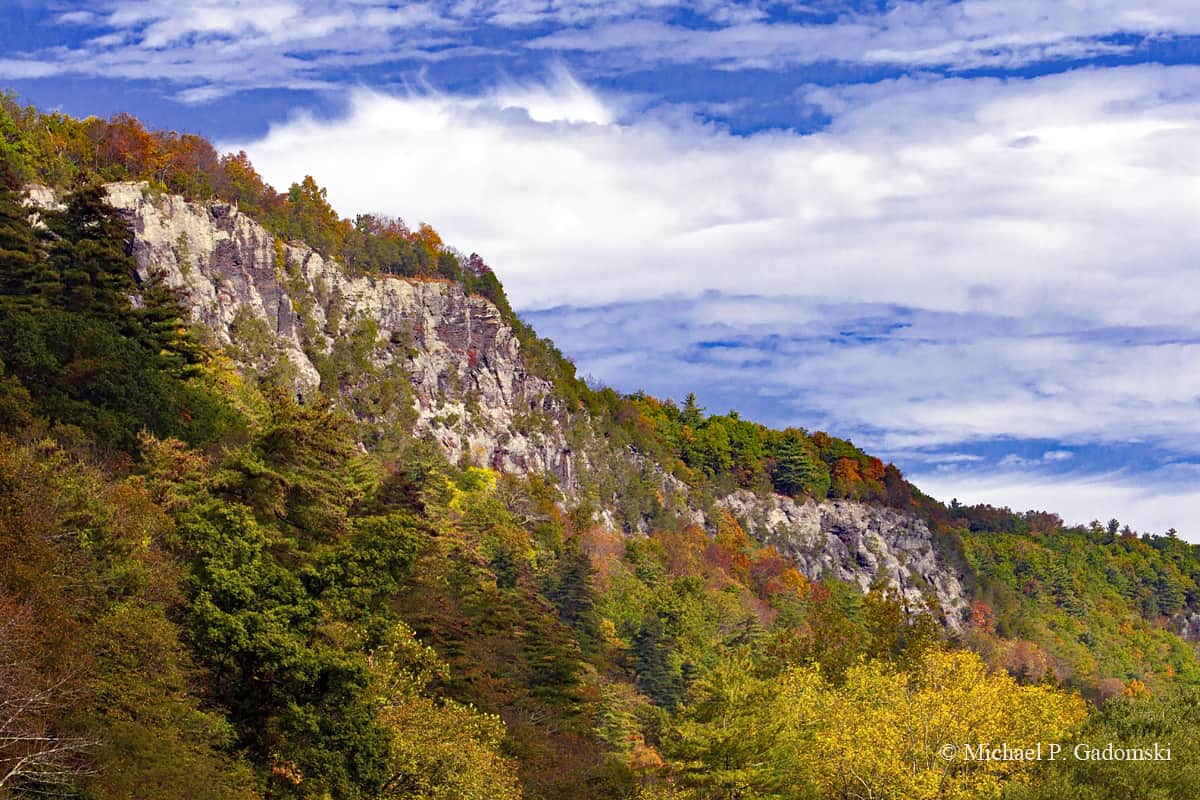 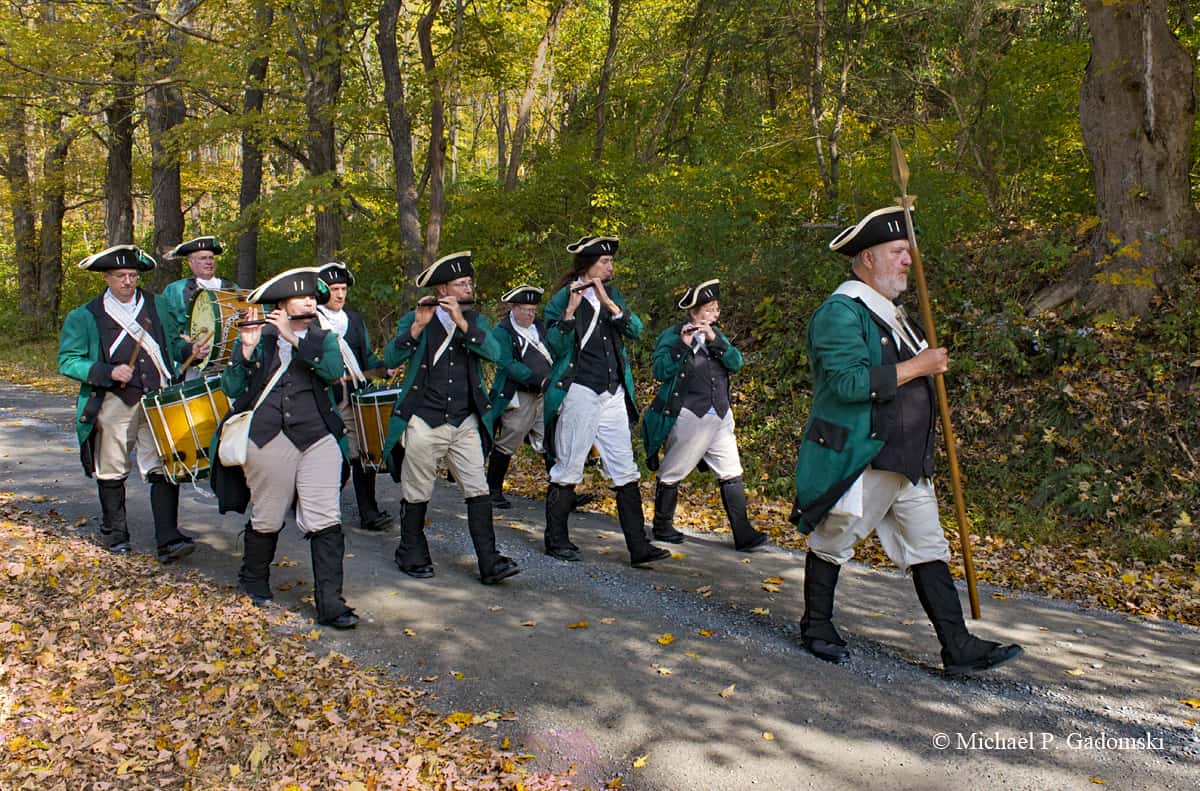 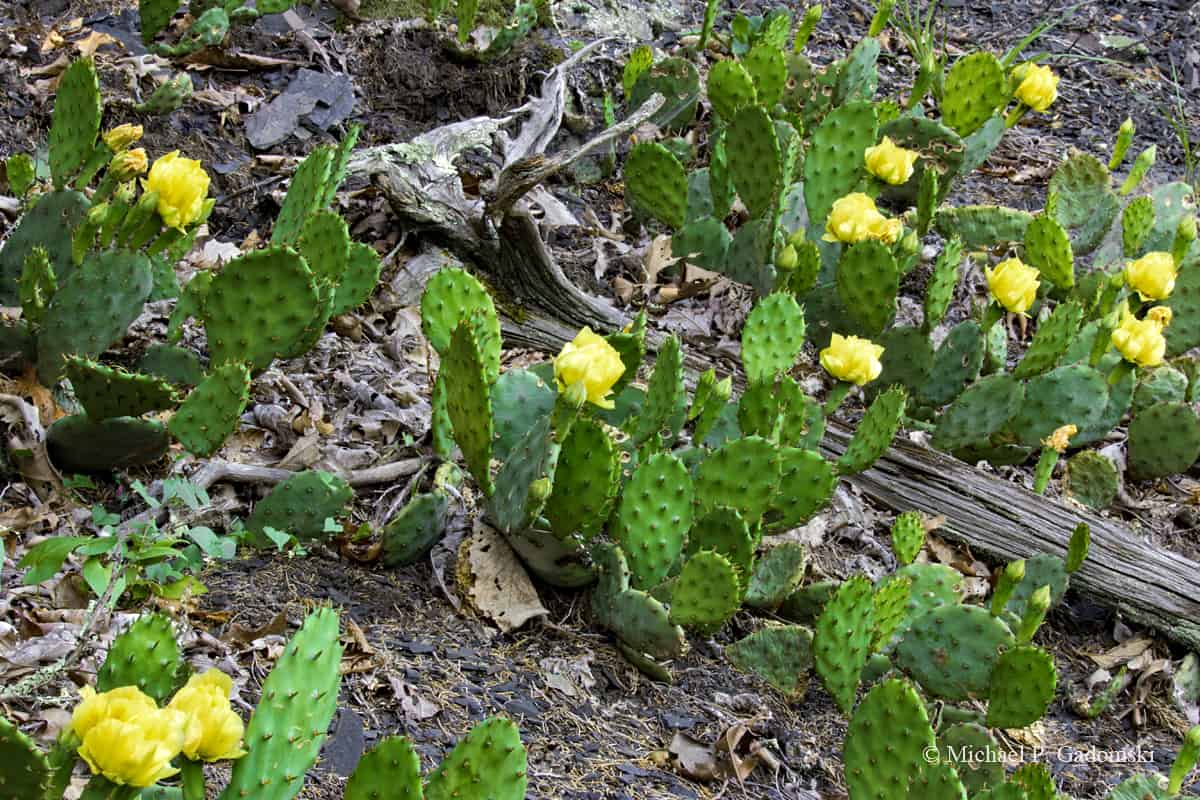 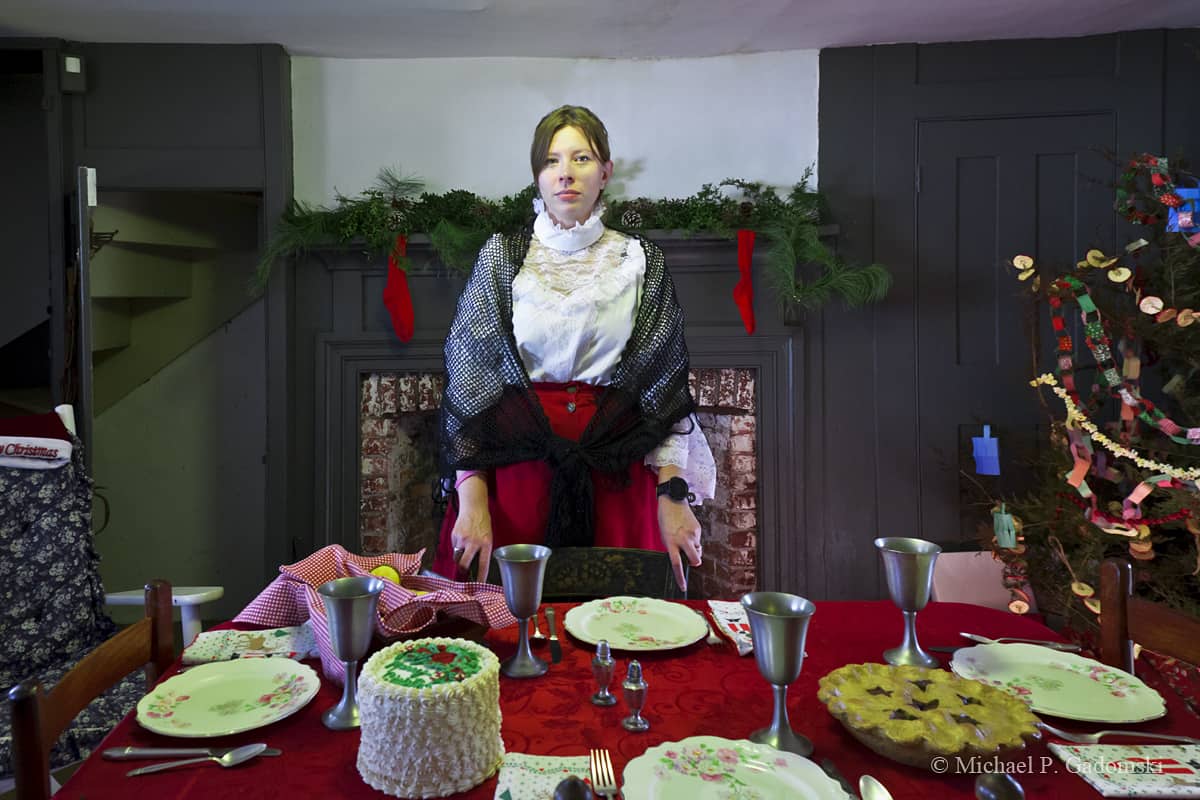 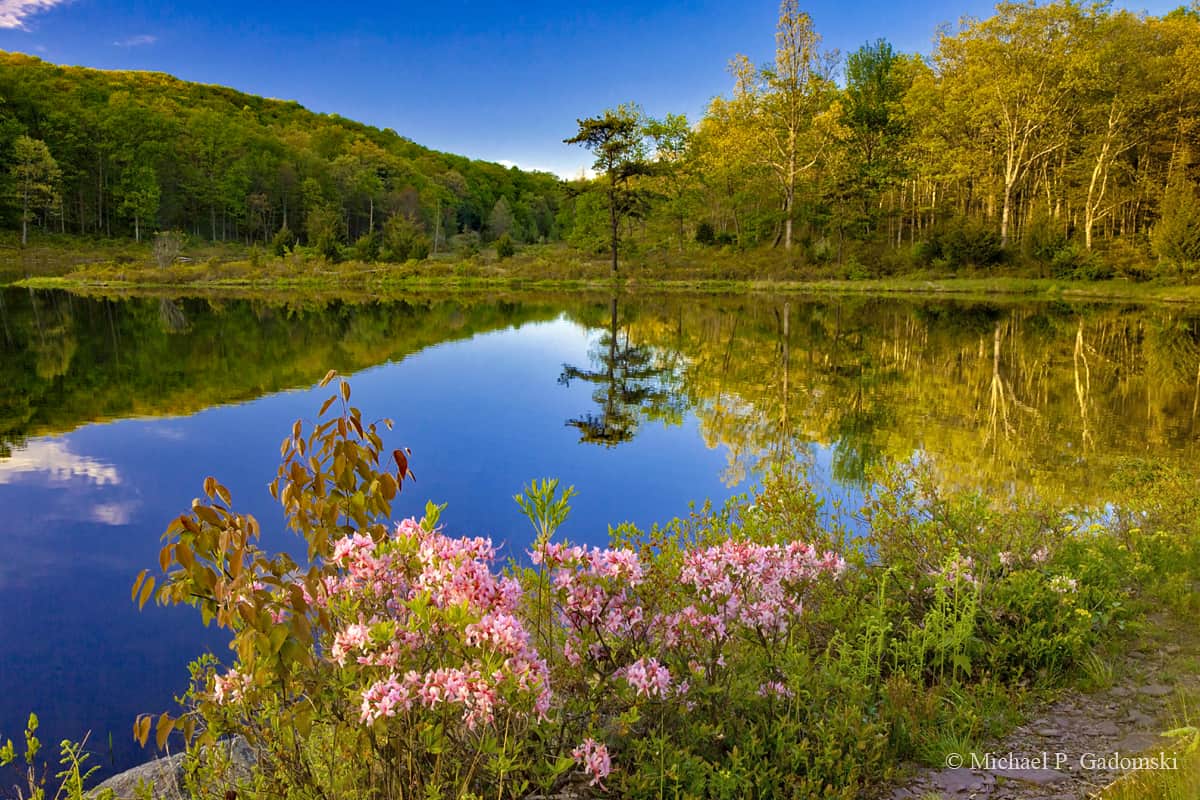 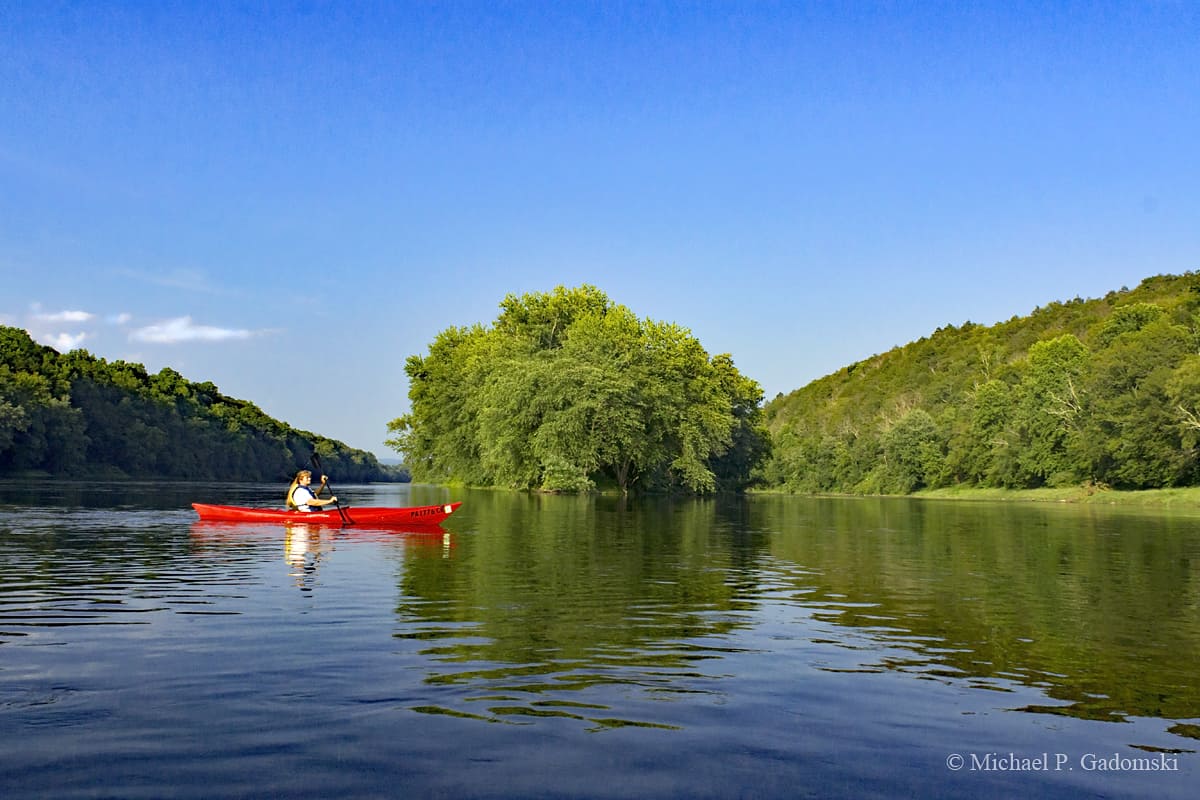 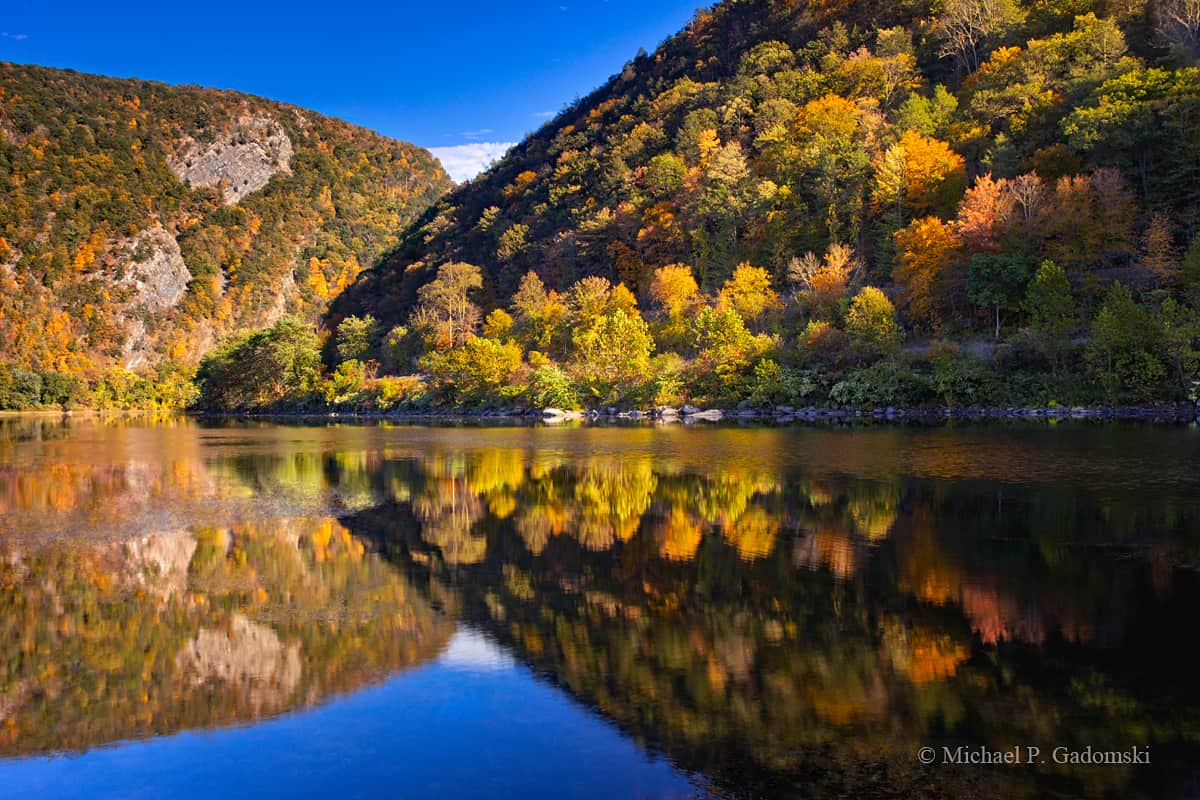