After tiring of city life, our goal this day was to tour a part of Butler County – a Pennsylvanian rural area of green rolling hills edging the city of Pittsburgh.

My daughter, several colleagues and I were quite excited at the prospect of spending the day discovering the countryside. Our group was still talking about our plans when we stepped off the bus. In a few minutes we were seated and indulging in a tasty breakfast at the Chop Shop, one of Butler’s favored eating spots.

Its owner and chef, Bill Atkinson, explained that his dream was to own a loud and fun restaurant, approachable to all but with a twist by having the tastiest and creative food in Butler County.

At only the age of 33, Chef Atkinson has created a culinary paradise that he refers to as casual fine dining. Casual in the sense that you can walk in with sneakers or even shorts then indulging in the best of popular foods.

Tacos are now Hare Tacos made with coffee-rubbed rabbit; nachos are offered as Barbequed Pork Nachos packed filled with pulled pork; a salad called ‘Ugly Duckling’ is a misnomer except for the fact that it is made with duck bacon, candied almonds, apple and spinach. But there is nothing ugly about it! The unbelievable Born on the Bayou burger, dressed with spinach, caramelized onions, and smoked gouda cheese sauce, these and more make the Chop Shop in demand by the local community as well as visitors.

Its ambiance adds to the flavor of the place – a completely open kitchen without a microwave in sight and a potpourri of car and garage memorabilia has made this place a center for experiencing the best of what one man’s culinary ingenuity can do to mark his county as one of the best in food.

A short distance away, it was quite a different stop. We had reached Zanella Milling in West Sunbury district, a historic mill – the last producer of buckwheat flour in southwest Pennsylvania. The mill also produces and packages self-rising cornmeal and pancake flour but its raison d’être is buckwheat flour, an ingredient for making the best type of pancake.

We toured the mill guided by the owner John Zanella, who was proud of his mill and for the continuation of milling buckwheat. As he explained, Butler County was at one time called ‘Buckwheat County’ and by maintaining the tradition of milling this product, he is keeping history alive. Although the mill, built originally in 1897 experienced a major fire in the late 19th century and numerous renovations over the decades, it still churns out those products that are on demand by the local population.

And it has moved along with the times producing gluten-free buckwheat. After a quite interesting tour of how the milling process works, our host treated us to an absolutely delicious sampling of buckwheat pancakes soaked in maple syrup. My daughter Muna was sold on these grilled wonders and purchased a bag of the mill’s pancake powder lecturing our group on how healthy can be tasty.

From buckwheat to hard cider, we moved from one side of the culinary world to another. At Rebellion Ciderworks we indulged in tasting various types of hard cider, followed by a tour of a family-owned orchard where some of the apples for making cider are grown. Derrick, the brains behind the concept of producing hard cider, explained even though he is a fourth-generation farmer and believes wholeheartedly in traditional farming methods, he was concerned about the future of farming.

He looked to the future and thought about creating a business using farming techniques but where he could control the product from start to finish. He thought about cider, fully researched the subject and planted an orchard experimenting with 30 types of apples. Old-fashioned cider is now the hard variety meeting with the demands of new ideas in traditional farming.

At Rebellion, Derrick has ‘rebelled’ in a sense by introducing a very good hard cider that is slowly being introduced to dining establishments in the county and state. A young man with a long-term vision with farming as his training – an impressive skill for success.

With some of our group hugging bottles of hard cider they had purchased, we left for the North Country Brewing Company Restaurant. Now it was time again to eat. We sat down for lunch on the patio at the Restaurant that offers produce and meat from its own farm and those of the surrounding countryside. The fresher the food, the better it tastes and this restaurant is proof of this adage.

Comfort or ‘sturdy’ food as the manager explained, is the result of ‘farm to fork’ and their menu is really fine-dining in a rural atmosphere. We ate our fill, washing our meals down with glasses of foaming beer provided by its own on-site brewery house. Most of us, feeling sated, and a little-over-filled, found our next stop an opportunity where we could bask in nature’s beauty and walk off some of our expanding waistlines.

We had reached Jennings Environmental Education Center, a state park dedicated to providing environmental information to the public especially through schools and colleges. Among its numerous attributes, and one of the park’s main features, is the 20-acre only manageable prairie ecosystem in the eastern U.S., a relic from the ice-age. It is home to distinctive prairie plants and the endangered Massasauga rattlesnake.

As we sat classroom style we were taught about edible invasive plants. Later, our well informed and environment-passionate guide took us for a walk along one of the park’s many hiking trails. However, my daughter ran rushing back harshly complaining that “Mosquitoes are the curse of mankind! These are invasive, not the plants!”

Still listening to my daughter’s complaints about her 1,001 bites, we stopped at The Snowman, a friendly roadside attraction for some tasty cool-me-downs: flavoured shaved ice, ice cream on sticks, real juice smoothies and rich Yetis made with shaved ice and ice cream and Yeti Milkshakes with the added pleasure of milk, both varieties topped with whipped cream.

Our group of Canadian travelers seemed very comfortable here as The Snowman figurine bore an uncanny resemblance to our beloved Monsieur Bonhomme of Québec. Although the owner of this enterprise had absolutely no inkling of Quebec’s City’s winter mascot, it turned out that he had purchased the figurine from Canada!

After resting for an hour in the hotel, we prepared ourselves for dinner at the Siba Mediterranean Cucina, Butler County’s exquisite upscale dining place where one ‘steps out of the ordinary into the extraordinary’. Calling itself ‘an oasis of inspired Tuscan fusion foods’, Siba offers an array of modern Italian and other Mediterranean cuisines. Using fresh seasonal products from local farms, fresh local meats and even fresh fish flown in each day, Siba is a wonderful sophisticated dining place combined with exemplary service.

As I finished my meal Muna commented that this was one of the best meals that she had ever had. I agreed but with a grin responded “Yes!” I said pointing to my stomach. “But I need to loosen my belt at least two inches.”

This tour was an eye-opening experience. Butler County is exploding into the culinary world of fine dining. From ‘farm to fork’, this region will soon be a focal point of the best of what organic or real farming can produce on a table. Ours was indeed a culinary adventure into good living and good comfort food. 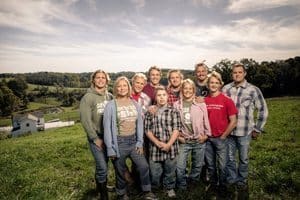 Habeeb Salloum is a travel and food writer, as well as the author more than a dozen books, who lives in Toronto Canada. He is GoNOMAD’s oldest contributor, and going strong! Click his name above to see his books on Amazon.