White Sands National Park in New Mexico is the newest national park in the United States. Stretching across 275 square miles of land in southern New Mexico, this spot has been a famous destination amongst travelers, hikers, and photographers.

On December 20, 2019, the White Sands National Park received a promotion from the White House. President Donald Trump signed a bill that changed the monument into a National Park, making it one of two National Parks to be established that year along with one in Indiana Dunes.

This promotion will certainly make White Sands National Park an even hotter destination than it already is. As a monument, White Sands attracted 500,000 people a year.

Now that it is a part of the illustrious group of 62 national parks in the US, representatives of the park are optimistic that this prestige and publicity will bring even more travelers to New Mexico each year.

With all that said, what does White Sands National Park have to offer for travelers?

Things to do at White Sands

The Trinity Site in the White Sands National Park represents one of the most monumental points in human history. On July 16th, 1945, at 5:30 a.m. the first atomic bomb was detonated about 60 miles north of White Sands National Monument. In the wake of a 38,000-foot-high mushroom cloud was a crater one-half mile across and eight feet deep.

The intense heat from the explosion fused the sand into a jade-like green color. The material was named Trinity, and the sight of the explosion was named Trinity Site. Through a sponsorship with the Alamogordo Chamber of Commerce and WSMR, the site can still be visited today, BUT only on the first Saturday of April and October.

Dunes Drive is an eight-mile scenic drive that starts at the visitor center and heads into the heart of the gypsum dune field. In addition to the breath-taking views, the park offers outdoor exhibits, hiking trails, picnic areas, vault toilets, and parking areas. With long expanses of white sand, silhouettes of towering mountains, and perhaps a vivid sunset if you time it right, the Dune Drive is best for those explorers who enjoy quiet, but no less astounding scenery and are eager to take pictures truly worth bragging about. 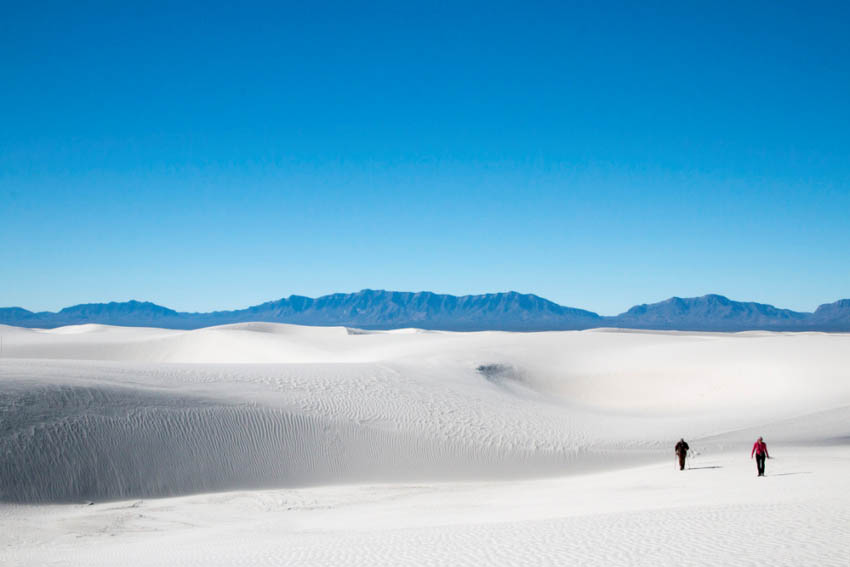 If you want to explore the vast expanse of white sand and gypsum, then choose from one of White Sands National Park’s hiking trails. The Interlude boardwalk is the shortest of the trails (0.4) miles and is wheelchair and stroller accessible. There will be plenty of dunes to admire, lizards to study, and birds to listen to while embarking on this brief, relaxing walk.

The Playa trail is a short (0.5 miles long), self-guided tour that takes wanderers to an ever-changing environment. Although normally a dry lakebed, the playas fill with water during the lake season and attract all sorts of animal and plant life.

The Backcountry Camping Trail and Alkali Trail air on the more difficult side of the White Sands hikes, but they are still doable for people who are not experienced hikers. The Backcountry Camping trail is a two-mile, round-trip hike that traverses through steep dunes and loose sand. From this hike, you will be able to gaze at the true scope of the enormous desert 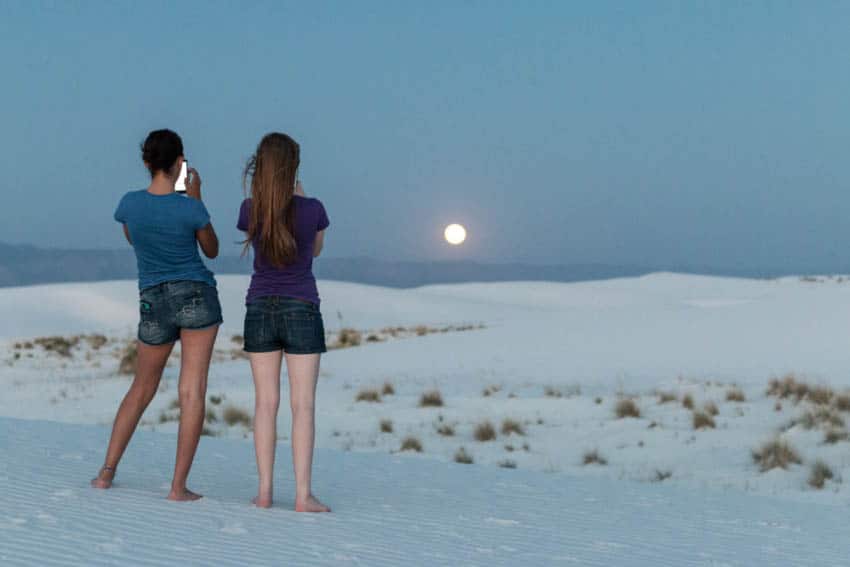 Ranger park programs offer guided tours of different areas of the park, including Sunset strolls and Full Moon hikes. The Full Moon hike lets explorers hike up and down the dunes without the strain of baking in the hot sun, guided by the peaceful, glowing light resonating from miles and miles of white sand.

The Lake Lucero tour brings hikers to the birthplace of the White Sands’ dunes. As you descend the gully into a lakebed brimming with thousands of exposed selenite crystals, Park Rangers will teach you about the formation of the White Sands National Park.

Many of these tours and hikes are only available at certain times of the year, so be sure to check out time periods for these tours here.

The Junior Ranger program has plenty of programs for kids to get them to explore the park. These activities include puzzles, desert safety activities, visitor center scavenger hunts, a wildlife checklist, and natural manners.

Junior Ranger booklets are available for free at the visitor’s center. Upon completion of the booklet, children will earn a Junior Dunes Ranger badge.

The White Sands National Park is located on the northern end of the Chihuahuan Desert, the largest desert in North America. This desert region amounts to about 175,000 square miles with an elevation ranges from near 1,000 feet above sea level along the Rio Grande in Texas to 10,000 feet in the mountainous regions of Mexico.

National Park offers a world-class visitor experience – with miles of hiking trails through the sands dunes, sand sledding down pristine gypsum sands dunes, driving the eight-mile scenic Dunes Drive, to the daily park ranger-led guided walk, the Sunset Stroll – there is something for everyone to enjoy during their visit.”

The White Sands National Park is open year-round. The park typically opens at 9 a.m. and will close at either 5 or 6 p.m. depending on the season.

The entire park is shut down on Christmas.However, sometimes the park will be closed during missile testing, so be sure to stay updated with that information to avoid driving up to a locked gate.