Rwanda: The Land of a Thousand Hills

Rwanda is quietly becoming one of Africa’s Top Tourist Destinations

Rwanda, The Land of a Thousand Hills, provides visitors with stunning scenery, friendly locals, and an absolutely unique experience. The country is filled with incredible biodiversity, with beautiful wildlife living throughout its volcanoes, rainforests, and sweeping plains.

Rwanda is the bridge between the forest ecosystems of the Congo basic along with the great rift valleys of the east. It shares in the biological riches of both worlds, offering a type of biodiversity that can’t be found anywhere else in Africa.

When visiting Rwanda, it’s impossible not to see and learn about the impact of the 1994 genocide against the Tutsi. Both a moving and uplifting experience, visitors will learn first-hand how the people of Rwanda have moved forward together to become a success story of peace and reconciliation.

There are plenty of memorials found throughout the country that are moving testimonies in memory of the 1994 genocide. On the 10th anniversary of the Rwanda genocide, the Kigali Genocide Memorial was inaugurated.

Here, 259,000 victims have been buried for those to mourn and remember. The memorial also serves to educate others about the genocide.

Today, Rwanda is both peaceful and exciting. As the country looks forward with a positive attitude, the vibrant nature of the community shines through.

No longer divided through tribal affiliation, Rwandans are working together to rebuild their wonderful nation. The country has advanced tremendously to improve education, health, social security, and encouraging individual entrepreneurship.

Those who visit say that even the little things surprise them. From the cleanliness of the streets to the standards of their roads, travelers will be pleased with how easy it is to fall in love with Rwanda.

The ‘Land of a Thousand Hills’ is fit in a compact size, which means visitors only need a short amount of time to explore the natural and cultural attractions that the country has to offer!

Rwanda’s rapidly growing capital, Kigali City, was founded in 1907 as a small administrative outpost with limited linage to the outside world.

Now, the city has become a modern metropolis offering a range of three to five-star accommodation options. For travelers, it’s warming to know that Kigali city is safe to wander the streets and explore the city on foot.

Visitors can immerse themselves in the local art, fashion, and culture as they shop around the city. Try out some of the best coffee on the continent grown right in Rwanda or taste the excellent local cuisine at a rooftop restaurant with wonderful of the city.

For those who enjoy the nightlife, there are plenty of options for clubs and bars with great music, drinks, and food with happy crowds.

In the far northwest of Rwanda, Volcanoes National Park is home to the endangered mountain gorilla and montane ecosystems, which include bamboo forests, open grassland, swamps, and heaths.

Karen Young, a recent traveler to Rwanda, says “seeing gorillas was so amazing. The countryside was beautiful and the people are so warm and inviting.”

Volcanoes National Park is named after the chain of dormant volcanoes that make up the Virunga Massif including the highest, Karisimbi, which reaches 4,507 meters into the sky.

One of the most unique experiences visitors can take part in is trekking the endangered mountain gorillas through the lively rainforest. During an expedition such as this one, travelers will hear the calls of colorful birds and chattering from the rare golden monkey.

Other experiences include hiking, canoeing, mountain biking, and indulging into the villages.

Within the Great Rift Valley lies Africa’s largest protected mountain rain forest, Nyungwe Forest. Acclaimed for its rich biodiversity and endemic species, Nyungwe Forest is also home to the only canopy walk in East Africa reaching 70 meters above the forest floor, spanning about 200 meters in length.

The park has various ecosystems from rainforests, bamboo, grassland, swamps, and bog habitats. It’s home to about 1,000 plant species, habituated chimpanzees, and 12 other primates including 400 Black and White Colobus monkeys and 75 different species of mammals.

For bird watchers, Nyungwe National Park is the place to be with over 310 species of which 27 are Albertine Rift endemics.

And if that wasn’t enough animals for visitors to see, elephants also congregate around the lakes that are inhabited by more than 800 hippos as well as Africa’s largest freshwater predator, the Nile crocodile.

Visitors can adventure on a day or night guided African savannah and highlands safari, or experience the forest-fringed lakes on a boat ride in one of the most scene reserves in Africa.

If lucky, one may come close to the secretive blue monkey, bush baby, or sitatunga swamp-dwelling antelope. Akagera is also an important birding area with nearly 500 species; 99 of those are not found in any other Rwandan national park.

Part of Africa’s Great Rift Valley, Lake Kivu, the country’s largest lake, sits in the west of Rwanda surrounded by magnificent mountains. Rubavu is a large town on the northern edge of the lake, about an hour’s drive from Volcanoes National Park, making it the perfect place to relax after gorilla trekking. Rubavu’s waterfront of lined with fading old mansions, hotels and trendy bars on the lakeshore, ideal for cocktails accompanied by a beautiful sunset.

From Rubavu in the north, the Congo Nile Trail extends 227 kilometers filled with breathtaking landscapes. The trail gently weaves through hills and mountains beside the lake with eucalyptus and banana trees lining the road.

For those adventurous travelers, try a kayaking tour on Lake Kivu, or mountain biking/hiking one of the six wonderful paths that follow the Congo Nile Trail.

Another hidden gem near Volcanoes National Park is Buganga Sacred Forest, a site of tremendous ecological importance and cultural significance where Rwandan Kings of the past had their initiation ceremonies.

The area is full myth and legend, where visitors will experience dragon trees and sightings of many different birds and colorful butterflies, the forest holds a network of trails made entirely from cut lava stones.

Rwanda is home to some of the world’s best-grown tea and coffee. Within the high mountain landscapes, cool climate, and rich volcanic soil, Rwanda has award-winning tea and coffee products.

Visitors can take some time to explore these areas from the nursery to plantations, pruning, picking, washing, drying, and finally, roasting. Finish the experience off with a tea or coffee tasting.

In the western part of the country, Karongi is known as one of the most relaxing and romantic areas of Lake Kivu’s town.

Travelers from near and far may spend a day on Napoleon’s Island for fishing with locals in traditional boats. Amahoro Island, better known as ‘One Bar Island’ is a fun little excursion for those who want to experience an island that holds just one bar, yup, that’s it! 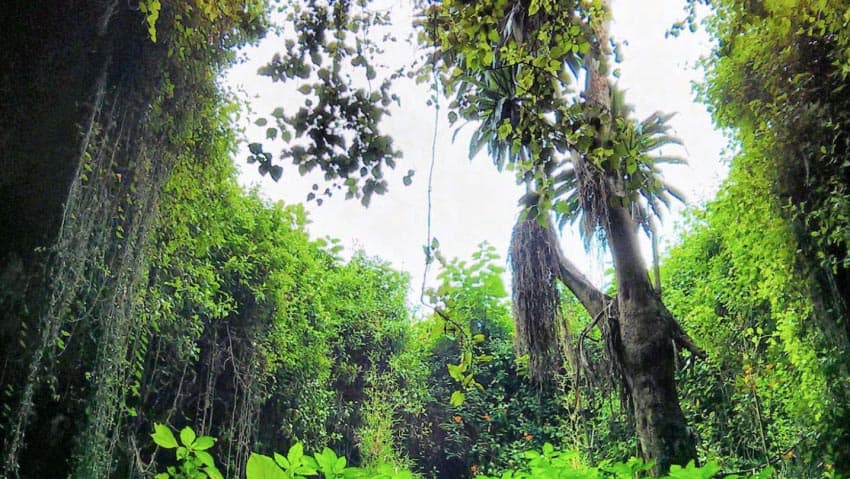 Some Quick Information About Rwanda