Roatán: The Highlight of Honduras

Roatán Island is located in the Bay Islands, off the north coast of Honduras. Roatán is a small island, 30 miles long and around 3 miles wide, and includes old-growth forests, beaches, iron shore and some hills up to nearly 1,000 feet in height. There is only one paved road and several dirt roads.

Roatán is what the Caribbean used to be 20 years ago: undiscovered, inexpensive and charming. The island offers some of the best SCUBA diving in the world while remaining very reasonable in cost. Soak in the relaxed, island way of life in the daytime, including hours of snorkeling just off the shore in many spots, and enjoy the hot nightlife in the small bars and discos in West End.

The locals are a delight and range from Hondurans who have emigrated from the mainland to the gentle-spirited Caribs of Punta Gorda, known as Garifuna, who in addition to speaking English, have their own language, mythology, and music.

And don’t forget the white islanders who are reputed to have descended from pirates.

Visitors come year-round, but the rainy season is roughly October through December. Usually, the rains only last a few hours, but very occasionally, there may be up to a week of rain during that time.

Take a bus, plane or car to La Ceiba, and take the daily boat from there.

No car is needed, since there is excellent public transportation in the way of mini-buses, and in some areas, water taxis. For exploring, a moped or bicycle is inexpensive, or if you really aren’t in a hurry, sea kayaks are available. There are also Suzuki Samurai’s and larger vehicles available for rent if you want to explore everywhere. 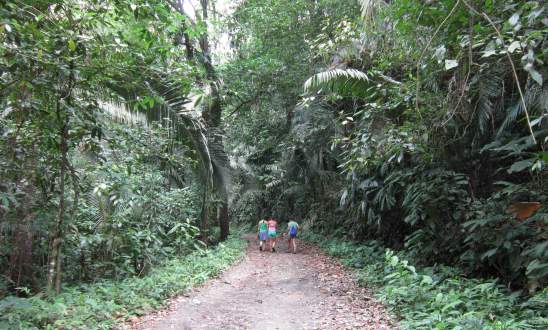 Swim or dive with uncaged dolphins and the occasional whale shark. Snorkel in Spooky Channel in Sandy Bay; climb to the top of the botanical gardens in Sandy Bay; visit Marble Hill Farms on the uncrowded East End where they make their own Batik clothing and island jams; visit the bird preserve in Sandy Bay; dance in the local discos or take a cayuca tour through the mangrove tunnels in Oak Ridge.

Visit the Iguana Reserve around lunchtime and see Big Red and hundreds of other iguanas. Bring along a watermelon or head of cabbage and watch them come out of the trees. Sherman Arch and his family protect them on acres of land devoted to the iguanas, to be later released into the wild. The preserve and hatchery are located in French Key next to French Harbour.

The best activity on Roatán costs little. Rent some snorkeling equipment and take the water taxi down to the one-mile long West Bay Beach. Have the driver drop you at the farthest dock. From there you can snorkel out and see all sorts of wondrous coral, tuna, parrotfish, yellow stripe and, if you are lucky and patient, maybe a spotted ray or a sea turtle. 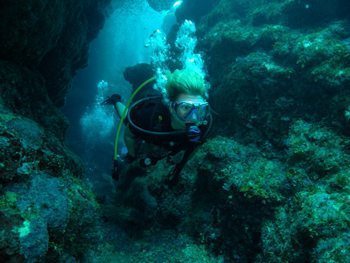 There are many guides around the West End. Some have boats and will take you out fishing, others will ride with you up island if you rent a car or a moped. If you plan to fish, make sure you aren’t fishing in the Marine Preserve extending from West Bay Beach to Sandy Bay.

If sailing is your thing, you may want to go for a sunset cruise at Belvedere’s or find Alex and he’ll take you for a sail to some snorkeling spots on his little wooden boat, Adventure Girl.

If dolphins are your thing, join the Dolphin Encounters at Anthony’s Key Resort’s Institute for Marine Sciences for a day of swimming with and learning about dolphins. They offer daily open water dolphin swims and great kids camp programs. For information and reservations, see anthonys-key.com.

For the landlubbers, there is still treasure to be found, although the hidden pirate caches are reputed to be guarded by those long dead. Instead, spend time with the local islanders. They are quick with a tale and many are also very knowledgeable in the ways of natural medicine and charms.

Occasional Garifuna dance displays in Punta Gorda. The music is hypnotic. The band Bobbie Rieman and Tunu play most weeks. They are a blues-based band with a good harp man.

Ask around about local artisans including painters and woodcarvers. They show their wares in West End at times, or you can go to Sandy Bay where there are two artisan exhibits.

Although the islands are part of Honduras, most of the people speak English, albeit with an island accent and unique grammar. For example, instead of asking, “Who is the owner of that dog?,” they will ask, “Who that dog be for?” If you hear an islander talk about “duppies,” you should know that they are talking about ghosts.

Of course, according to island lore, ghosts are easily fooled because they can’t turn corners. Banks will do a cash advance on credit cards, US Dollars or lempiras are accepted, and traveler’s checks are readily cashed.

Honeytrek: A Couple’s Guide to Roatan