Paris: A Fabulous Chapel To Amaze You

The architecture of this ancient gothic structure is astounding on its own, but when you add dazzling stained-glass windows, a violin concert, and a shimmering sunset, you’ve got the recipe for a magical evening.

As with any recipe, the key to greatness lies in the ingredients. So, let’s take a closer look at those:

Sainte Chapelle’s was originally built as part of a massive castle system called the Palais De La Cite, located on the river Seine. Here the kings of France resided from the 6th to the 14th century. During the French Revolution, the Palais De La Cite served as a courthouse and prison which held, among other unlucky guests, Marie Antoinette.

While much of the original castle is lost to the ravages of war and time, the most beautiful part – the royal chapel – remains.  St. Chapelle’s is currently classified as a national historical monument.

St. Chapelle’s was constructed between the years of 1238 and 1248, a remarkably short time for an edifice of this size and complexity.  It was commissioned by King Louis IX to house his collection of “Holy Relics of the Crucifixion of Christ”.

One of these – the Crown of Thorns – is believed to be the most important Christian relic in existence and is currently preserved in the Notre Dame Cathedral.

As is often the case with buildings like St. Chapelle’s, it’s hard to imagine how medieval architects and builders were able to craft such a wonder with the tools at hand.

This structure rises 139 feet in the air and is considered the prime example of Rayonnant Gothic architecture.  This style is characterized by strong vertical lines and a sense of weightlessness which certainly describes St. Chapelle’s.

Upon entering the main chapel, all eyes are drawn heavenward to the soaring heights of the vaulted ceiling. The striking combination of light and space is awe-inspiring, especially if you happen to visit on a sunny day, but the most famous features are the ancient stained-glass windows.

Fifteen massive panels of brilliantly colored glass are supported by a thin framework of stone. Each window tells a story – some refer to the holy relics, others are based on the Old and New Testament.

Although the interior is dominated by stained glass, the remaining space is also richly decorated with carvings, colors, and textiles. Studies have shown the original paint colors were much brighter than those usually employed in the 13th century. Most likely in an attempt to match the jewel tones of the windows.

Mounted on the columns that separate the panels are twelve larger than life-size statues representing the 12 apostles. Six of these have been damaged and replaced over the years, but the remaining six are originals.  Imagine, they’ve watched over this sacred place for nearly 800 years.

The royal chapel of St. Chapelle’s is compelling in the daylight hours, but if you’re lucky enough to be sitting in the chapel as the sun goes down, prepare to be amazed.

My husband and I visited in April and purchased tickets for an evening concert that began at 8:00 P.M. After a short introduction, a classical music group called Violon Nomades (Violin Nomads) played several selections of classical music.  The acoustics in the chapel are excellent and the music resonated throughout the room.

Then, as the delightful strains of Pachelbel’s Canon graced our ears, the sun began to set. The brilliant colors of the stained glass shimmered and muted as the exterior light extinguished.  Before long we found ourselves sitting in total darkness but for a solitary light illuminating the musicians. It was magical. 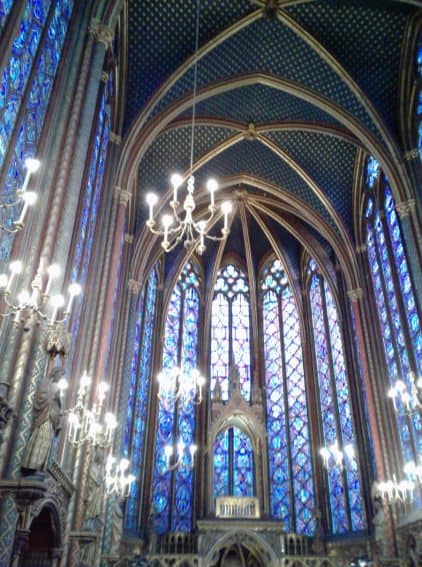 The Icing on the Chapel Cake

As the program wrapped up about 10:00 P.M., concertgoers spilled out onto the streets of Paris. Despite the hour, the city was humming with activity.

As we strolled along, we bought crepes from a street vendor, listened to a variety of street musicians, and enjoyed watching people from all walks of life have a wonderful time.

As a travel destination, Paris is in a class by itself, a gorgeous lady dressed in glittering jewels. There are so many things to see and do here that it’s difficult to choose but don’t miss St. Chapelle’s Royal Chapel. It’s an experience that will change your life.

If You’re In Paris:

Concert tickets can most easily be purchased online. One site is here.

What Else Should I See?

Other nearby points of interest include the Concierge prison where Marie Antoinette was held, Point Neuf – the oldest bridge on the river Seine, Place Dauphine one of the oldest squares in Paris, and a Flower market located near St Chappelle’s front door.

A little farther afield, but well worth the trip is Angelina’s Ristorante famous for the “world’s best” hot chocolate!

What Should I Read?

If you’re interested in Gothic architecture and the construction of the great cathedrals, pick up Ken Follett’s historical fiction novel The Pillars of the Earth, which chronicles the building of great cathedrals like this in the Middle Ages in fascinating detail. 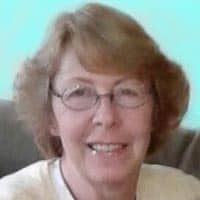 Geanie Roake is a librarian and writer from Salt Lake City who loves to see new places and write about all her adventures. Her motto is, Have Money Will Travel!