Of all the animals you can find in Yellowstone National Park, none generate the controversy nor the tourism revenue of the gray wolf. The predator was introduced back into the park fifteen years ago, after the original population was killed off by park rangers in the years up to 1926.

After decades of debate, study and acrimony between wolf lovers and ranchers, who stand at opposite sides of this fiery issue, the decision was made and today, about 75 adult wolves and 50 pups live in the park.

Visitors can see them through scopes that are frequently set up along the roads and in certain locations by wolf-lovers, who help park rangers keep track of them by reporting sitings. If you’re planning a trip to Yellowstone, track down ranger Rick McIntyre and look for him leaning over a scope or speaking to visitors. McIntyre, 61, a park ranger who has worked in Alaska’s Denali, and Montana’s Glacier National Parks, has made the study of these creatures his life’s work.

McIntyre said that there is no place on earth that’s better for viewing wolves than this Yellowstone, located mostly in the northeast corner of Wyoming.

The vast flat plains that are bordered by distant forests and the glittering rivers are perfect habitat and allow visitors to pull over and view the many species that live here. The viewing opportunities that present themselves here to devoted wolf-lovers makes this their Mecca.

The Story of Number 21

Rick told us the story of Yellowstone’s first reintroduced wolves — including one of first alpha males, called number 21, and his mate, 42. Their offspring would later include one of his personal favorites that a National Geographic film crew nicknamed Casanova, but McIntyre called 302.

“He liked the females so much, he never made much of an alpha male wolf. He preferred to find mates and when threatened by other wolves or other predators, he’d turn tail and run instead of fight. He was very popular and had many girlfriends, siring dozens of offspring.”

McIntyre talked about the wolves as if they were humans, yet it all made sense. His tireless daily pursuit has resulted in nearly 8000 pages of field notes, culling all of his own wolf observations along with records of hundreds of volunteers’ sitings, creating a valuable record of what they eat, how they live and how they die.

“When was the last time you took a vacation?” we asked him. He said he hasn’t missed a single day of wolf observing in ten years. “What else would I do?” he said with a smile.

Even in the worst winter blizzards, McIntyre never ever fails to go out and observe his cherished creatures. He’s single and has never married, and lives in a cabin in Silver Gate near the park.

McIntyre speaks of the relationships people have with their children and grandchildren, and how they follow their activities as they grow up. He is the same way with his wolves, noting their mating, when they change packs, and when and how they die. He was especially sad to see the demise of 302, the Casanova.

He said that at the end of his life at age nine, 302 became a true alpha male and left behind his promiscuous ways, finally figuring out how to be the pack’s dominant male. It was clear that he felt a deep connection to the animals as he spoke in his gentle voice about how much they mean to him.

In the three states that border the 3366 square-mile park, there are different laws controlling wolves: In Wyoming, they’re shot on sight by ranchers; in Montana it’s against the law to kill them; and in Idaho wolves are hunted and trapped within season. Harvest limits are in place for some mangament zones which immediately close the hunting season once the harvest has been met. Hunters are only allowed to possess up to five legal huting tags per calendar year and trappers up to five trapping tags per trapping season.

Ask anyone out here and they will have an opinion of what’s best… and won’t agree with the other opinions.

One thing nobody disagrees with is that the wolves have brought many more visitors both to the park and to surrounding communities. One motel owner in the town of Cooke City, Montana, told me that it has been a marked upswing in people who are coming to the park just to see the wolves.

Another benefit is that wolves kill elk and other animals and their carcasses become food for the other popular predator, the grizzly and black bear. So having the wolves has helped to strengthen the bear population.

Yellowstone is also famous for bison, who love to stroll right down the yellow center line of the roads. Mule deer and elk are also frequently seen, and there are more than 600 grizzly bears living here too.

This year has been a bad year for bear attacks in the area; two of them occurred in the summer of 2010. The two recent deaths by bears occurred outside the park. You’ll never stop hearing this advice: Don’t approach bison, bear or wolves if you see them. And never feed or annoy them either!

Crowded in July
The park can be crowded, especially if you visit in July; more than a million people came to visit in 2010. The roads can become traffic jams while people pull over to view wildlife; if you can come in late August or early June it would be a little less crowded.

In September it’s less crowded than summer, and you can watch the elk rut, the mating ritual that pits big bull elks against each other in combat.

But whenever you go, the infrastructure of the big park is well laid out, with a figure eight road crossing into all of the various wildlife viewing areas, and they know how to handle crowds here.

Get an Early Start

One tip: Get up early. It’s always best to rise at the crack of dawn for wildlife viewing and especially, to see the famous Old Faithful geyser. Any time before 11 am is advised.

An elegant place to stay is the Lake Yellowstone Hotel, which was built 120 years ago and is a stately presence right on the lake, bordered by views of the great snowy peaks of the Absaroka and the Tetons in the distance. Nights average about $200 with breakfast.

There are also options to sleep in rustic cabins or in your own RV. Park admission is $25 per car which allows a one-week stay. You cannot drive into the park after Thanksgiving when the road is closed.

There are many dining options, including buying groceries at the many stores around the park, or dining in the elegant lakefront dining room of the Lake Yellowstone Hotel. 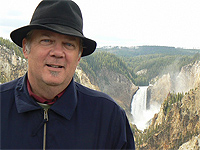 Max Hartshorne is the editor of GoNOMAD. He writes a daily blog Readuponit that provides readers with a chance to accompany him on his travels and share stories of the people, the places and the sites that he visits.