The Festival of the Sahara in Tunisia

Here in America, the circus keeps audiences at bay under big tents and atop tall grandstands. But in Tunisia, festivals encourage visitors to

submerge themselves in the experience by staying close to the action.

Every December, two dusty towns in the inhospitable southern region of Tunisia, far from the Mediterranean Sea or the rainy hills of the northwest, share festivals dedicated to oasis life. Tozeur and Douz, about 65 miles apart, schedule festivals back-to-back to honor their ancient history of nomadic life, camel caravans and traditional music.

Today I’m in Douz among a crowd of 10,000 spectators camouflaging themselves from the sun with celebratory little red flags. They shift anxiously on concrete stands that stretch out in front of a stage of sand and dust.

Across from us are dozens of brown Bedouin tents called hair tents because they are woven from goat hair.

Pacing horses and wrinkled musicians practice for their grand entrance against a backdrop of scrubby palms and rolling dunes.

The military watches me with suspicious eyes as I set up my video camera to record the dignitaries. They arrive from all over North Africa in four-wheel-drive jeeps escorted to their seats by security.

A tall man in a black jacket directs me where to stand and what to shoot. His dubious looks are unnerving but my travel guide assures me it’s for my protection.

This is day four of four, the last of the celebration of arts and traditions in a baked brick city of otherwise quiet nomadic life.

The arid landscape is about 100 miles west of the coastal city of Gabes and just south of the Chott El Jerid dry salt lake bed.

Douz is called the ‘Gateway to the Sahara’ and, besides this festival, offers sandy treasures like camel excursions, balloon rides and sand skiing.

Finally, the Minister of Cultural Affairs is comfortably seated and an over-zealous Master of Ceremonies begins the program in French, Arabic and some English. His amplified delivery is earsplitting despite being in a boundless desert.

A Tunisian flag is stretched out and carried alongside a larger-than-life painting of President Zine El Abidine Ben Ali and a responsive crowd chants his name, “Ben Ali, Ben Ali, Ben Ali!”

Men dressed in flowing white turbans wrapped around their heads and faces ride in on camels dressed with colorful tassels around their long necks. Striped blankets cover their humps while bells jingle from their collars.

This marks the beginning of a long procession of performers from all over North Africa – Morocco, Algeria, Libya, Turkey and of course, Tunisia. Between the raised flags and gun salutes, there are so many senses are at play it’s hard to know where to focus.

Loud drums called daloukas hang from the waists of musicians that bang and clamor the instrument to the tribal rhythms of Arab and Andalusian music.

The audience erupts into applause as a man balances seven fragile white clay jars atop his head. Then, one by one, white jars are added to the top of a ladder, this time the man grips the ladder between his teeth. His mouth – like a steal vice grip, locks onto the wood frame while children behind me gasp at the sight.

Suddenly, a spooked camel strays from the parade and launches itself in the direction of the clapping dignitaries safely seated from a viewing platform. Security spring into action with guns and muscle drawn. They secure the creature before it jumps the barricade.

Now I know why I was instructed to videotape from a safe distance.

On the horizon is a growing band of traveling camels, each outfitted with a traditional Bedouin wedding tent called a houdach.

Weddings are an expensive and flamboyant affair and once upon a time they culminated in the bride departing for the grooms house fitted inside a houdach, hidden from view.

A sword-wielding soldier rides a white stallion and jumps forward from the wedding parade to bow to the audience. His horse does the same followed by a little boy standing atop his dad’s shoulders on the back of a galloping horse.

Soon the father-son team will ride in circles performing high-flying stunts and acrobatics, one time blindfolded and then backwards.

The Spanish encourage bullfighting while the Italians enjoy a good cockfight but at the International Sahara Desert Festival the most popular sport is camel wrestling.

Aptly named because the adult male camels do not draw blood but rather pin each other’s legs and heads in an effort to topple each other to the ground, just like in wrestling.

When white milky saliva flies from the camel’s mouth and nostrils you know the camel is ready to rumble, charging is expected during mating season.

The event coordinates a short-lived match between two one-ton camels. The audience gasps at the strength and agility of the normally tame and placid creatures.

The camels bite each other on the ears and necks but it’s mostly confined to pushing, shoving and locking the weaker into submission.

The excitement simmers when a line of a dozen young girls crouch to the ground and swing their long brown tresses from side-to-side to the cacophony of tribal music blaring from the speakers.

This dance is known as the nakh or ‘hair dance’ and it’s easy to see how a loose-swaying mane once hypnotized Berber men into marriage, an intended result. The girls toss their hair back and forth like the wind.

Dog vs the Underdog

The dog and rabbit chase jolts everyone back on their feet placing bets on which will win – the quick and muscular Arabian greyhound or the small furry mammal.

The hound is a Moroccan breed called the Sloughi, possible related to the dogs of the Egyptian Pharaoh and trained to hunt since ancient times.

It takes several hounds with the grace, power and speed of a winning thoroughbred to finally trap Bugs Bunny, much to the disappointment of cheering kids rooting for the underdog.

Three hours into the final performance the color of the sunburned sky softens into a warm amber glow. The desert grows cold and the faces of the performers show signs of thirst and fatigue.

I too am so caught up in the excitement of the show that I don?t feel my kneecaps buckling under from squatting so long. After the final horserace, every one takes a bow and the audience reciprocates with a standing ovation. Security can breath easy now and helps me to my feet.

The place clears out in no time but the pride Tunisians feel for their timeless heritage lasts long after the blowing sands settle over the Sahara. 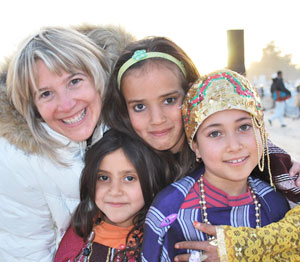 Sonja Stark, shown with new friends in Tunisia, is a freelance videographer, editor and travel writer, founder of Pilotgirl Productions and a GoNOMAD staff writer.