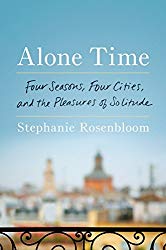 Stephanie Rosenbloom’s new book is a beautifully written account and examination of the unique joys and pleasures of solo travel that looks at the ways that being alone can be an opportunity to appreciate experiences and make unanticipated discoveries.

follows New York Times Travel columnist Stephanie Rosenbloom as she explores the benefits of traveling solo. Through on-the-ground reporting, insights from social science, and recounting the experiences of artists, writers, and innovators who cherished solitude, Rosenbloom considers how solo travel enhances one’s appreciation for everyday beauty and one’s attention to the senses, sights, sounds, and smells, that are not as strong in the presence of company.

According to Rosenbloom, there are significant benefits to every person spending a little time alone. In this alone time, away from the influence of others, we can explore and develop who we are. There is room for imagination, independent thinking, problem-solving, experimentation, and creativity—processes the presence of others can inhibit. Alone time can also allow us to be ourselves, and to refuel.

Alone, we can be reflective of our actions and lives. And when traveling alone, we can slow down and zero in on the details that surround us; all the subtle things we often miss when talking with companions. Alone on the road, we can also cultivate greater confidence. We have the freedom to pursue the hobbies and interests that get us excited and spark new endeavors—a big part of what gives life meaning.

Excerpt from the Book, Alone Time

“Paris; June. The taxi rolled to a stop in front of 22 rue de la Parcheminerie. It was Saturday morning before the café chairs were put out, before visitors began arriving at the old church, before check-in time at the little hotel with its window boxes of red geraniums. Cigarette butts and red petals were scattered across the sidewalk. I was alone with a suitcase and a reservation. And days to live however I chose.

The average adult spends about one-third of his or her waking time alone. – Mihaly Csikszentmihalyi, Flow

How are you spending yours? Scrolling Facebook? Texting? Tweeting? Online shopping? The to-do list is endless. But time isn’t. Alone time is an invitation, a chance to do the things you’ve longed to do. You can read, code, paint, meditate, practice a language, or go for a stroll.

Alone, you can pick through sidewalk crates of used books without worrying you’re hijacking your companion’s afternoon or being judged for your lousy idea of a good time. You need not carry on polite conversation. You can go to a park. You can go to Paris.

You’d hardly be alone. From North America to South Korea more people are living by themselves than ever before. Single-person households are projected to be the fastest-growing household profile globally from today to 2030.

Airbnb is seeing more solo travelers than ever. Intrepid Travel reports that half of its guests—some seventy-five thousand people a year—are now traveling by themselves, leading the company to create its very first solos only tours. And the boom isn’t being driven just by people who are single: The “married-with-kids: solo traveler market is growing as well.

Nearly 10 percent of American travelers with partners and children are taking solo vacations during the year, according to one of the world’s largest travel marketing organizations, MMGY Global. In other words, traveling alone isn’t just for twentysomethings and retirees, but for anyone who wants it, at any age, in any situation: partners, parents, and singles looking for romance—or not.

Few of us want to be recluses. The rise of co-working and co-living spaces around the world is but the latest evidence of that. Yet having a little time to ourselves, be it five days in Europe or fives minutes in our backyard, can be downright enviable.

Some 85 percent of adults—both men and women, across all age groups—told the Pew Research Center that it’s important for them to be completely alone sometimes. A survey by Euromonitor International found that people want more time not only with their families but also by themselves.

And yet many of us, even those who cherish alone time, are often reluctant to do certain things on our own—which may lead us to miss out on entertaining, enriching, even life-changing experiences and new relationships.

A series of studies published in the Journal of Consumer Research found that men and women were likely to avoid enjoyable public activities like going to a movie or restaurant if they had no one to accompany them.

Any potential pleasure and inspiration that might come from seeing a great film or an art show was outweighed by their belief that going alone wouldn’t be as much fun, not to mention their concerns about how they might be perceived by others.

Indeed, for many of us, solitude is something to be avoided, something associated with problems like loneliness and depression. Freud observed that “the first situation phobias of children are darkness and solitude.”

In many preliterate cultures, solitude was thought to be practically intolerable, as the psychologist Mihaly Csikszentmihalyi wrote in Flow, his book about the science of happiness.

“Only witches and shamans feel comfortable spending time by themselves.”

Stephanie Rosenbloom is the staff columnist for the Travel section of the New York Times, where she has been a reporter for various desks (including Styles, Business, and Real Estate) for more than a decade. She has appeared on CNN’s American Morning, NBC’s The Today Show, and NPR’s The Takeaway.

highly recommended by our reviewer.