American Borders: A solo-circumnavigation of the U.S. with a Sidecar

This story is adapted from a chapter in American Borders: A solo-circumnavigation of the United States borders on a Russian sidecar motorcycle by Carla King. During the 1995 journey, King worked as a test rider for the original Ural importer.

She also test rode the concept of the realtime online travelogue a new thing called the World Wide Web for publisher O’Reilly & Associates.

American Borders is the story of breakdowns in small towns all around the USA as the author test rides and repairs the Russian Ural sidecar motorcycle for the American importer in 1995.

The Native Canadians made this a sacred place. They trekked over the windy, barren plains perhaps attracted, as I was, by the promise of a small mountain peak in the distance.

After trudging day after day over the flat land, they must have been astonished to arrive at the lip of a river valley so abruptly that if they had been traveling on wheels at high speed they would have fallen right in.

I arrived just before sunset, in time to see the slow, muddy river below winding its way around the busy campground. In the valley lay clusters of twisted rocks like petrified tornadoes, some pitted so they resembled faces. Their tops were wider than their stems, providing perfect perches for watching the subtle spectacles of nature. Children chased each other around the forest of miniature buttes and scrambled up the twisted, slender stems to hoist themselves on top.

Camping by the River

I rode into camp and chose a spot by the river next to a family. Moe and Kathy invited me to dinner, and soon I was Auntie Carla to their four delightful granddaughters, all competing for my attention.

It rained all night, but in the morning the sky was clear and bright. From my tent, I watched a deer munching grass beside a table rock. I unzipped the door and startled two rabbits, who froze, except for their quivering pink noses, waiting for the right moment to bound away.

The family had signed up for an interpretive tour of the park and invited me to tag along. Our guide told us the Blackfoot who considered this a sacred place, and a useful place, too. They drove buffalo from the plains over the cliffs, and the animals’ bones were still buried here along with arrowheads and butchering tools. We also learned that the border between the United States and Canada had been called the Medicine Line by the Blackfoot.

Having no concept of borders, they discovered that when they galloped south with contraband whiskey the Canadian Mounties would stop chasing them at a particular line. Likewise, the Americans would halt at the same line when the Blackfoot galloped north. Obviously, there was some strong but mysterious “medicine” happening there.

Though the trail was hidden from the vast grasslands above we could see the wide river that looped and meandered through the valley below. We walked along a rock wall carved and illustrated by ancient hands. The smaller girls whimpered; it was getting hot, and they kept close to the shaded cliffs as Bonnie, our guide, talked about the art and Blackfoot culture.

They had used every part of the Bison they killed. The bones were made into implements, the nose cartilage into chewing gum. They were our first environmentalists, she told our small group. “Perhaps if we had studied how they managed their lives, instead of experimenting with environmentalism on our own, from scratch, we would be way ahead of our present situation,” she said.

Bonnie admired the Blackfoot and had even been invited to some of the tribe’s gatherings, which was quite an honor for an outsider. As an interpreter, she eagerly consulted the elders about the meanings of the petroglyphs and pictograms on the rocks.

She pointed out one pictogram where the end of a horse’s nose was drawn with an opening in the line to indicate that it was breathing and therefore alive. If the nose was drawn closed, it was not breathing, so that meant it was dead.

However, the meaning of a small person drawn upside-down, with another, larger person standing over him, was less clear. Depending on the context it might be a birth scene, or maybe it was the spirit rising out of a person who had just died.

The drawings had played an important role in a ritual called a vision quest, in which young Blackfoot men would spend four days and nights without water or food on top of a hoodoo—the strange rock formations in this valley. Four days and nights fasting on a rock here would easily be long enough to conjure up a vision suitable for a secret soul painting.

After the tour, I hiked back alone, wanting to quietly contemplate what I had just learned. The hoodoos rose above me and I could no longer see the river. Tiny flowers tucked their roots into the rocks, their blossoms bright against the sandstone. Thick clumps of low-growing thistles bloomed purple; a cactus flower closed its waxy cream-colored petals around the moisture it had gathered the previous night.

I picked some Saskatoon berries, which were mealy, like old blueberries, and found some yellow currants. They were juicy and tart, like chewing tiny sweet lemons.

I paused for a time to sit on a table rock in the sun and tried to imagine myself on a vision quest, and soon realized I probably wouldn’t have made it; it was hot, and I was very thirsty.

A noisy group of rafters came along and interrupted my fantasy so I followed the river back to my tent. When I arrived, I heard Moe talking. I didn’t understand the first part of what he was saying, but the next part was clear: “And she doesn’t have to have a man around to help her do this, either,” he said, in a stern voice. “You just always try to remember that.” 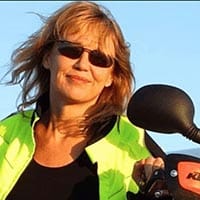 Carla King’s American Borders dispatches pioneered the art of the realtime online travelogue in the early days of the internet in 1995. She then blogged her way through China on a Chang Jiang sidecar rig, India on a Royal Enfield Bullet, around the Adriatic Sea on a Moto Guzzi and many other places including Morocco, Mexico, and most recently, Thailand. As a moto journalist, she has published gear and motorcycle reviews in many motorcycle magazines.

Buy this book American Borders: A solo-circumnavigation of the United States