Colombia: Life is Simple at The Waterfalls

In the remote south of Colombia, The Waterfalls teaches sustainability and community

San Agustín is a small town in the south of Colombia, transformed into a tourist hotspot upon the discovery in the 1940s of mysterious sculptures and monuments scattered across ancient burial sites.

It is to this small corner of the brilliantly-green Colombian Andes that I made my way, a 9-hour bus journey from the country’s capital; Bogotá.

I had come to work on a permaculture farm, named The Waterfalls, which I discovered through WorkAway (a site advertising volunteering jobs in extraordinary places around the world, offering accommodation in exchange for five hours of work, five days a week).

On arriving in San Agustín, I was met by Dago who whizzed me the 20-minute mototaxi (motorcycle) ride to the farm (up and down the mountains, clinging onto my overstuffed backpack and only vaguely worrying whether I should be wearing a helmet).

We wound deeper and deeper through plantain and coffee farms before reaching The Waterfalls with its gorgeous, sustainably-built home sat exquisitely on the mountain’s edge, and overlooking valleys dipping gleefully up and down.

Steve and Diani are an Englishman/Colombian couple who set up The Waterfalls four years ago with the intention of running a sustainable farm. They wanted to work with volunteers from around the world, as well as local people, to create a continuous community.

The inspiration for their farm was the need to look at world challenges on a large-scale, and see how we can tackle them within our own smaller communities and homes.

Steve talks about being motivated by early human activity thousands of years ago when humans lived in small communities, and ego-centric behavior was frowned upon and punished.

Steve and Diana want to get back to that small-community way of life, to work together in order to live in harmony with our environment.

Their farm does just that; crops of plantain, coffee, banana, manioc, wild raspberry, avocado, arracacha and more blend into the surroundings with a natural wilderness.

Steve and Diana’s farm invites volunteers from all over the world to stay in their house and pitch into the various tasks that need to be done.

As a result, in this secluded corner of the Colombian countryside, I encountered a hip and tech-savvy YouTuber from California, a 40-year-old Indian man who left his office job with the goal of traveling the entire world, and a hippie couple from New Zealand who are making their way across Latin America by volunteering.

The atmosphere on the farm was relaxed but busy. Rather than being told what to do and how to do it, we were encouraged to decide what worked best for us on that particular day and could discuss with Steve our ideas for performing a particular task.

Steve explains that this sense of community is in our blood and that he has observed people coming from all corners of the globe to work hard, for no financial compensation, rather to learn and feel part of a community.

I also discovered a fresh, and uplifting view on creativity at The Waterfalls, as the couple encourages their volunteers to paint, create, build, write, cook; each individual talent has taken seriously, and appreciated as another important contribution to the farm.

In my ten days, Daniel from India taught me how to make proper curry and naan bread, Zac from New Zealand showed me the art of artisanal copper bracelets, Californian DK explained how he makes videos and where his inspiration comes from, and Mykaila designed and gave me my first tattoo.

Every two or three days, I was put on food duty with another volunteer. This meant waking up in the morning to make porridge or arepas (a maize-based Colombian food that can be adapted flexibly to a range of ingredients) which we enjoyed with eggs or fruit, freshly-squeezed orange juice and home-roasted coffee grown on the farm.

For lunch, we cooked any number of vegetarian dishes, and the ingredients were sourced mainly from the farm or bought from neighbors. We breakfasted with Diana and Steve and their adorable little girl, Kiya – who joined in enthusiastically, reaching sticky fingers into the porridge – whilst discussing the day ahead.

Tasks that needed doing included: roasting coffee, spraying the plants with an organic fertilizer made from molasses and micro-organisms found on the forest floor, digging a new dry toilet (a sustainable alternative to a regular toilet), cutting down bamboo to build a new house, clearing a forest path and cleaning.

The work could be exhausting, but was extremely gratifying – there was a victorious sense of achievement with each blister I proudly acquired. This ties in with the community the couple are trying to create: one in which willing volunteers work together with a shared vision, without being put under any stress or sense of coercion to achieve this.

The work day was in no way strict or confined to a timetable or task. If we were tired, we could opt for something easier. If the sun was out, we were encouraged to take off for an hour and trek to a nearby waterfall and bathe in the river – only for a minute before the freezing water started to hurt my brain.

The afternoons were my own, to lose myself in the mountain’s coffee plantations or attempt learning how to walk along the slack-line that is installed in the garden.

It is rare, I think, to walk into a place as diverse as where I worked for ten days. In total, our respective nationalities covered 5 continents which, of course, sparked fascinating conversation, with perspectives formed in countries and cultures alien to my own.

We talked about vegetarianism, philosophy, the planet and how to save it, religion, life growing up in other backgrounds and more. I learned intriguing facts, like how the Colombian people of San Agustín consider the end of the month to be the optimum – and indeed the only appropriate – time to cut crops and one’s own hair.

DK, the vegan Youtuber from California, could fill any silence with absorbing philosophical questions that ranged from the thought-provoking “what would you put on a billboard for the whole world to see?” to the more intense “have you ever considered that we treat animals like slaves?”

For the most part, we talked about the environment, and how Steve and Diana’s project should be upheld as a global example. How can the UK ship apples to France and back, just so they can be aesthetically ‘glazed’, when here a community thrives by eating what it grows, straight from the organically-fertilized soil?

With the afternoons spent at our leisure, I had the chance to get to know San Agustín and its gorgeous surrounding. I spent many afternoons going on long wanders through the mountains, seeking ever-higher viewpoints.

Steve helped us to organize a horse-riding trek one afternoon, and we were led high up the mountains until becoming obscured ourselves by clouds – my peace only is broken when DK mused “does this feel wrong to you? Riding these horses for hours like they’re our servants?”

Every so often our guide would stop us at one of the ancient burial grounds that are scattered across this region, to admire the strange statues that were built by a thousand-year-old civilization.

These sites lend San Agustín a deliciously mysterious feel, as it homes the largest group of religious monuments found in Latin America, but gives us little insight into the lives of the ancient people who once lived there.

Other afternoons I spent in San Agustín town, trailing through indistinguishable souvenir shops and drinking hot chocolate side by side with Prema (one of the menagerie of house pets; comprising four dogs, a cat and a horse), who would religiously follow anyone all the way to town, and then need a lift back on the mototaxi herself. There is also a plethora of treks to be enjoyed around San Agustín.

I hiked one afternoon up to La Chasquira viewpoint, and gazed in amazement at the tumbling view of mountains’ sides, cracked open wide by waterfalls and oversaturated with forest – the view only slightly blemished by a teenage couple giggling and blasting reggaeton at full volume.

At the farm, Steve and Diana want to exhibit what is important in life, and inspire their volunteers to explore the same ethos. I noticed that whilst the farm is busy, and there are always things to be done, the couple take the time to do things which others might not deem as imperative.

Something creative, for example; Steve playing his guitar, setting aside time each day for meditation, and spending the evening playing cards and drinking home-brewed wine. They are also able to spend a tremendous amount of time with Kiya, their daughter, playing with her or taking her for wanders to the waterfalls

Kiya who, without the distraction of screens in her childhood, can spend half-an-hour entranced by a beetle or some other perplexing creature she might come across in her fascinating world.

A Lesson in Simplicity

On my 9-hour-bus ride back, I reflected how the extraordinary simplicity of this life – and all that it tries to achieve in its own little slice of the planet – should be a lesson for those of us who lead more hectic, distracted lives in other parts of the world.

Before busy and bustling Bogotá, I relished the peace I had acquired by taking a step into a different kind of connected, more natural way of life. 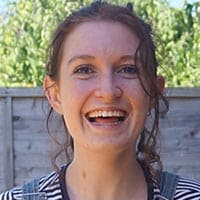 Hattie Rowan is a Spanish and French student at the University of Warwick in England. She is currently working as an English language assistant in Santiago, Chile for her year abroad. Read her blog.