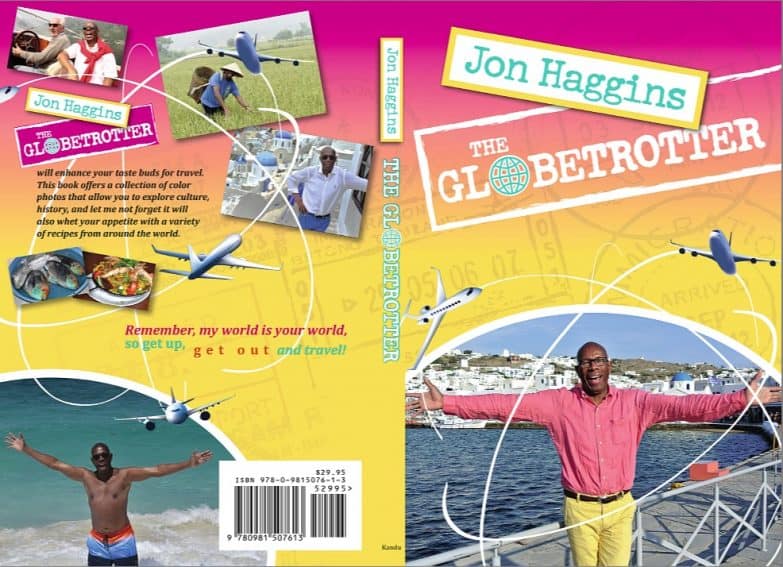 Jon Haggins the GlobeTrotter is a journey onto itself. If you’ve ever had a desire to see the world, the color photos will take you there as you turn the pages. You will explore Egypt, Thailand, Malaysia, Vietnam, the Caribbean, France, Corsica, The Aegean Sea, Greece & Turkey, Italy, Portugal, Canada, Alaska, Mexico, Sweden, Brazil, and many more.

Let me not forget the history, culture and the aromatic recipes that will whet your appetite for the taste and flavors from around the world. No matter where we are in the world, food makes us feel like home.

Excerpt from the book: Vietnam is a Wonderful Surprise: Ho Chi Minh City

The city of Ho Chi Minh, formerly known as Saigon, is a thriving city with lots of sites to see.

One large imposing structure is the Reunification Palace, which was the former residence of the President of South Vietnam until end of April 1975.

The War Remnants Museum exhibits several floors of posters, photos, and artifacts of the devastating war. There are also a number of aircraft on the grounds to remind everyone of the country’s past.

France progressively carved itself a huge colony, which would form French Indochina in 1887. France continued to rule Vietnam as a colony until France’s defeat in the First Indochina War and the proclamation of Vietnam’s independence in 1954.

>Some French colonial structures remain including the Notre Dame cathedral, which is impressive. The Old Central Post Office is a grand building that includes a shopping mall.

China Town is intriguing and colorful, especially the Thien Hau & Quan Am Pagodas. The Thien Hau Pagoda is a group of four houses forming the work “khau”, which means mouth in English.

The middle of the houses are three main shrines; front one, central one and back one.

Between the shrines is a space called heaven well, which make the pagoda well airy and bright. The Quan Am Pagodas was founded in the early 19th century. 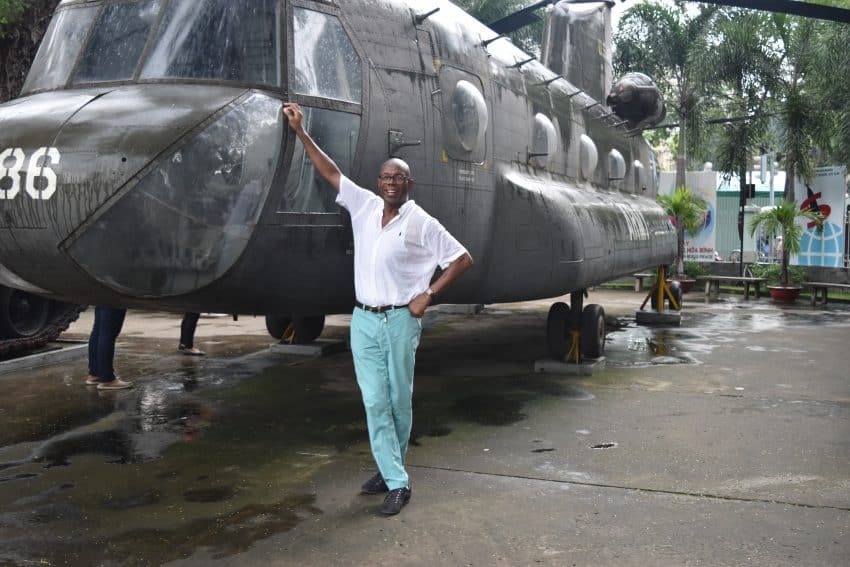 It is one of the oldest surviving temples in the city and still regularly welcomes Buddhist believers.

It was named after the Goddess of Mercy and its mission is to provide help and assistance to anyone who is in trouble.

A must visit is the Ben Thanh market where anything and everything is for sales.

One of the fascinating features of the market is haggling for the best price on leather goods and trinkets.

Actually, I didn’t need anything, but I wanted it, so I did the old walk away trick and pretended I didn’t want it. Eventually, the vendor surrendered to my price. It is a cultural game and I love it.

One must take a rickshaw ride on the bustling streets and interweave through a million motorbikes and tons of traffic. It’s a very energizing experience. It’s also amazing that there aren’t many accidents. It seems that everyone respects the other’s space.

While riding in the rickshaw, I got a lay of the land, passing hotels, shops, and restaurants. There are a number of street vendors selling everything from flowers to colorful fresh fruit.

The locals are very friendly; it’s the land of smiles. They are always willing to assist with directions or whatever you ask. English is spoken throughout the city. Ho Chi Minh offers a variety of terrific restaurants serving the best cuisine.

We dined at Home Restaurant. The building was a mansion during the French occupation. It has been converted into a fine dining experience. There are also many first-class accommodations throughout the city.

An early evening dinner cruise on the Mekong River was a treat. The entertainers encouraged guests to participate. While sailing along the coast, the shoreline lit up to show off its treasures. There were several other dinner cruises passing on the river.

Vietnam is full of surprises. After, a fantastic evening, the next morning we were picked up to continued our journey to My Tho, where we boarded a boat.

We stopped briefly at the brick-kiln to watch a brick maker at work. After returning to the boat, we were off to a coconut-processing workshop where workers were making coconut candies and colorful souvenirs.

The next stop was at the Nhon Trach village by motor cart “Xe loi” to visit a mat-weaving village and then to a local house to enjoy some seasonal-fruit and coconut juice.

After our visit we were transferred to a motorboat along the Nhon Thanh creek and back to Ben Tre River.

A tour of Cai Rang Floating Market in Can Tho on the Mekong River is a must experience. The river was sprinkled with floating patches of algae and buzzing boat traffic that passes in both directions.

It’s a fascinating market where vendors start their day at 4 a.m. There are 400 to 500 boats on an ordinary day and up to 700 trading boats during the run-up to Tet holidays. By 9 a.m. the boats grow thin and the market closes.

The boats display their items on bamboo poles, which are called beo poles and used to advertise their fruits and vegetables, local staples commodities, merchandise and delicacies that characterize the region’s cultural identity and enhance the market’s distinct charm.

Lovely ladies, in their coolie hats, and gentleman parade up and down the river. This is not an ordinary tourist experience. It is magic to the eye. Every angle is fascinating and colorful, just ripe for photographs.

After a brief visit, we were off to board a canoe where our guide steered with a long pole as he glided under a canopy of trees along the narrow and shallow waters of the estuary while passing many small villages.

He worked up quite a sweat.

The Vietnamese are very proud of their Hydro-Electricity Plant in Hoa Binh, which supplies energy to the country. It’s an amazing site with an endless tunnel that leads to an underground power plant.

After departing the plant, we were off to a fantastic cruise on the Da River, where we shared a lunch of local dishes, while the entertainment showed off their talent.

The cruise was very relaxing and the lake was tranquil. Our captain allowed me to take the helm of the boat and wear his cap. I was captain for an entire hour.

After disembarking, we stopped at some Muong and Hmong tribal villages. The Muong is the third largest of Vietnam. It is estimated that there is a population of 1.3 million.

The Muong people inhabit the mountainous region of northern Vietnam, concentrated in Hoa Binh Province. The Hmong tribe is an indigenous people in Asia.

After a brief visit, we boarded a canoe where our guide maneuvered the boat with a long pole, passing under a canopy of trees hovering over the shallow waters of the estuary while passing many small villages. He worked up quite a sweat.

Homestead Lodge is located in the heart of an oasis where fresh dishes were served such as elephant fish, fresh vegetables, and an array of other assorted dishes. Dining under a thatched roof is a perfect way to spend the afternoon. Homestead also offers lodging and bikes to explore the surroundings.

After lunch, we took a walk through the thick jungle, suddenly a green snake dropped from the tree in front of me and scared me half to death.

Someone told me it wasn’t poisonous. That was a little too much excitement for the day.

Mai Chau is an eco-lodge that sits high on a mountain with a spectacular view of rice paddies. We biked into the rice paddy fields and stopped for a photo op.

Whereupon a young lady was tending the rice and we asked if we could borrow her basket and coolie hat for a photo. She was most agreeable.

Then we were off to a village before returning to the lodge for a dip in the pool. The outdoor pool was a perfect place to cool off after a fun day of touring.

Mai Chau lodge offers cooking lessons with the chef. It is so relaxing to participate in the lesson. The lodge’s restaurant serves an array of spectacular dishes to whet your appetite. The accommodations are first class. Dinner was celebrated with traditional music and a dance show.

Hanoi is the modern capital city with lots of skyscrapers and an abundance of new development. The city is very green with a variety of parks.

There are a number of lakes such as Hoan Kiem Lake, from where the Ngoc Son Buddhist Temple sits in the middle with the best view of the city. Hanoi also has a number of public parks where families come to relax.

You must explore the Old Quarter streets from Hang Dau to Hang Gai. The Old Quarter’s narrow streets are packed with family-owned shops selling almost everything under the sun.

There are lots of great bargains to be had in the Old Quarter: you simply need to haggle the price down. It’s a very energizing experience. There are many vendors on bikes offering everything from flowers to fresh colorful fruit.

No visit is complete without visiting the Temple of Literature. It was constructed in 1070 during the Ly Dynasty.

It is a site of special significance that encapsulates the culture and heritage of the Vietnamese people. Founded in honor of the Chinese philosopher Confucius, it served as a center for higher learning, educating future mandarins for more than seven centuries.

The temple was modeled on the original Temple of Confucius in the Chinese city of Qufu and consists of five courtyards, the first two of which feature well-tended lawns. Walls and ornamental gateways separate each courtyard, and a central pathway through the complex divides it into two symmetrical halves.

Vietnam is a fascinating destination that has to be explored because it has so much to offer and the people are so hospitable.