Entrudo in Lazarim in Portugal

The bus churns to a stop in Lamego. I grab my bags and fly out the door, into the backseat of an idling cab.

Shaken from his afternoon paper, the startled driver springs to action hits the gas, and we careen into the countryside, tires screeching.

I had left Lisbon that morning for Portugal’s northern interior; surrounding snow-capped peaks were already turning blue in the fading light.

“This is the last day, no?” His questioning eyes meet mine in the rear-view mirror.

I’m gratified at his fluency in English, but he’s mistaken. For me, it’s just beginning.

We race past orchards and the blurred ruins of monasteries, hashing out a plan. He drops me on the road to Lazarim, and I join others hiking into town, where festivities are underway.

The Largo do Padrao is thick with spectators. Twin coffee-colored oxen, their massive heads crowned in flowers, pull a hay cart of waving children across the cobblestones. A column of shawl-draped women strut in lockstep, harmonizing folk tunes.

Packs of agile dogs dart through lines of drummers and fiddlers, to circle vendors’ carts where fat slabs of dried pork hang, just out of reach.

Not a scantily-clad samba dancer in sight – what sort of Carnival is this?

The resulting commingled culture adopted the Portuguese Entrudo, or Fat Tuesday, the day before Lent, and over time, infused it with a riotous, licentious joy.

Many Carnival societies are seduced by Rio’s rituals, and borrow them back. But in the untouristed, terraced hills of the Alto Douro, customs more consistent with Portugal’s Celtic origins hold sway. The Lenten calendar and harvest cycle are intertwined, and Entrudo brings masquerade, poetry, parody, and the purging of winter.

I’ve arrived on Fat Sunday, two days before Entrudo. Steps from the square, past stalls of handicrafts, meats and cheeses, I enter a voluminous white tent. In the bright afternoon light, long dining tables are aligned family style, each place setting with a fresh bouquet, commemorative plate, and printed schedule of events.

Townsfolk scurry about, hefting chewy hunks of broa and trays of meats for the fire. Vino tinto flows freely as dignitaries shake hands, and celebrants greet and embrace through nubby woolen coats. I fight the cold with pastry; sweet pudim ovos from the ladies at the Cancer Society Booth.

A man briefly abandons his slicing knife to walk visitors to the maskmakers’ workshop. Inside, as three guys hack and jab into slabs of alderwood, chips fly into the frosty air, and land in fragrant curlicued piles about them. Staring up through heaps of sawdust, the partially etched faces of a skull, devil, and a deer await refinement.

The quickest route to new identity, masks have long played a role in Carnival, and their instant anonymity may inspire nefarious deeds. During the heavy-handed regime of António Salazar, when Entrudo was discouraged or banned, maskmaking went underground.

Historically, carvers were local men of the land, and mask imagery rooted in Christian beliefs. Now carving is specialized, commissioned, and can be inspired by current events. Jose Antonio da Silva Costa, called Costinho, worked in the family furniture business. Born in 1972, he’s the youngest of the local masters, and perfected his craft in Lazarim. Each mask can take him up to thirty hours. He smiles shyly and hoists up his devil-in-progress.

With the sun moving behind the mountains, the chill intensifies. After feasting and merrymaking, visitors begin an exodus to nearby towns and local inns for the night. Under starlight, I backtrack along the frozen rutted road, spot the warm yellow headlights of the idling cab, and fall into the backseat for the return to Lamego.

Fat Tuesday begins with ominous clouds skirting the mountains, threatening rain. The curious arrive undeterred, while a crew from Lisbon’s TSF Broadcasting runs cables and positions video cameras. For the first time, Lazarim is to be included in a national Carnival round-up, set for broadcast that evening.

Tangy aromas waft through the serpentine streets from another square, where sturdy women in peasant garb arch over bubbling iron pots, set on open fires.

Flushed and grimacing, they stir the feijoada stew with a possessive determination, and shoo away children who dart about the edge of the flames like teasing fairies; a living, breathing Brueghel painting.
There’s warmth in the crush of people. Despite prodigious consumption of spirits, the vibe is civil, almost restrained. Perhaps, like Venice, its too cold to make real trouble.

A squinting, black-clad matriarch points to the sun, which has shifted from behind the clouds to brighten the landscape. And now, the first devil appears – like a silent apparition. Inscrutably masked, suited in straw, he pierces the sky with a wooden pitchfork, and forges a path right through us.

Soon a moon-masked marauder on a donkey, a maiden shrouded in lace and ivy leaves, and a cross-dressing, umbrella-toting phantom, have materialized. Geishas, goblins, and long-tongued demons pop up abruptly, douse the unsuspecting with clouds of corn meal flour, and evaporate. Castro, Bin Laden, and Camões, Portugal’s legendary poet, are among us. A Pope draped in a flea market tapestry rug blesses all with his scepter.

In time, we thread our way back to the main square. Caretos (masqueraders) pack in with villagers and visitors to await the featured event. All eyes are on a balcony above, where a young couple in funereal garb stand poised, books in hand. To each of their sides, colorful male and female mannequins, held aloft on sticks, sway in the wind.

All fall silent for “the serious part,” the Testaments of the Compadres and Comadres. These rhymes chastise, tease, and judge behaviors. They’re the mock will of the Elders, whose impending symbolic sacrifice means renewal, the end of winter and welcoming of spring. Each four-line verse is punctuated by a drum roll, laughter and commentary from the crowd:

Standing squeezed between a masked sheep and a skeleton, I feel as if I’ve dropped in on an extended family gathering. But my grasp of Portuguese is pobre; I miss the punch lines, and, for the time being, must simply revel in the rhythm.

A Scene From a Children’s Book

After several hours of recitation, there’s a collective sigh – a palpable release of energy – as the readers close their books and descend the stairs.

Cigarettes dangling from their lips, the drummers begin a dirge. Everyone lines up for a procession. The readers, in mock-somber demeanor, take the lead, followed by the bobbing Compadre and Comadre puppets, assorted masked devils, animals, senhorinhas, politicians, ghouls, and us regular folks. A scene torn from the pages of a children’s book.

We wend our way along ancient granite paths to where Lazarim backs into the mountains, and form a circle. With great theatrics, the effigies are carried uphill to a platform, and in turn, lit with firesticks. They whistle and whirl in circles, like an amusement park attraction, before exploding in booming puffs of colored smoke.

Amid cheers, the procession reverses direction, and the mischief resumes; more dousing, rambunctious running, an occasional lecherous prod. Bemused villagers take a break from their labors to watch though half-open gates. I peak back to see fruit trees, small vineyards, and lines of laundry, dancing in the smoky air.

A Party That’s Hard to Leave

At a closing ceremony at dusk, participants are recognized for their distinctive costumes or masks, which they remove with great flourish to reveal true identities. Surprise – that menacing devil in red; a sweet-faced college student. The moon-faced donkey rider works at a port winery downriver.

It’s the party that’s hard to leave. Instead, we shuffle over to where the cozinheiras, guardians of the pots, stand with ladles poised. Hands cupping our empty bowls, the steamy concoction is portioned out, and we slurp and chat, and mingle by the cooking embers, now the sole source of light.

Back in Lamego that night, I dust the cornmeal flour from my clothes, shower, and settle under the covers with TV remote at the ready. After the late news, Portugal’s Carnival cities report in: Torres Vedras, Ovas, Loulé.

Amid giant cartoony floats, huge crowds and glittery samba dancers, there’s little Lazarim. On the screen it looks even more rustic, the masks even more cryptic, and I feel like a time-traveler, safely returned. 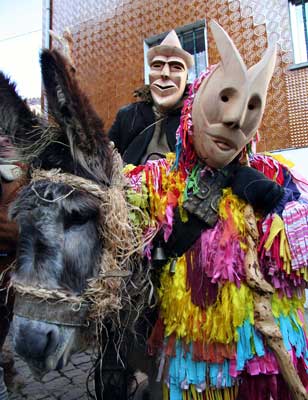 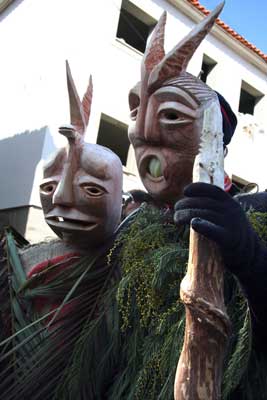 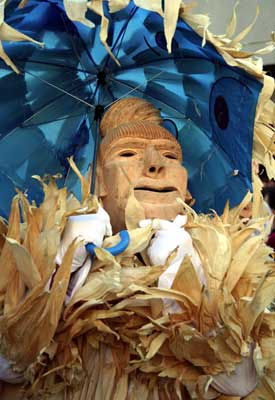 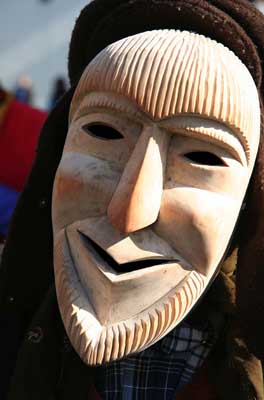 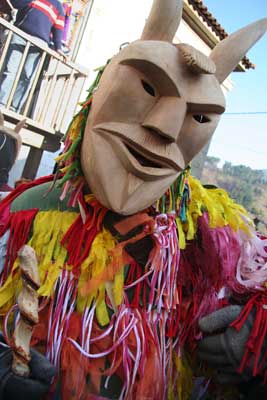 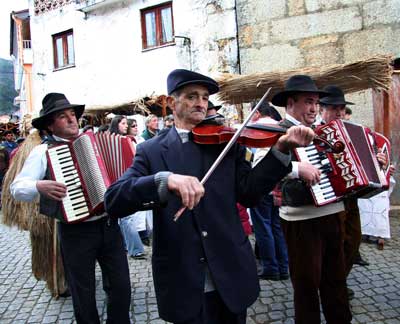 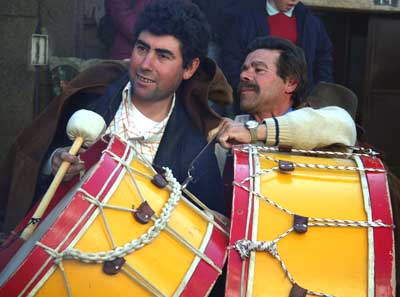 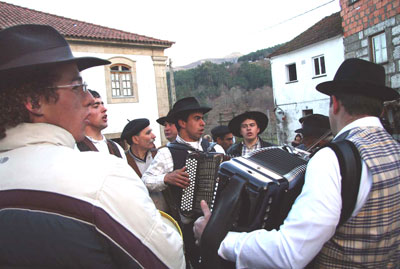 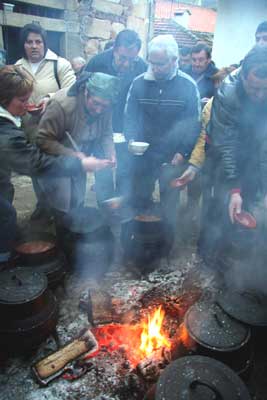