The Atlantic breeze flowing along the broad Tagus river and climbing the hills of Lisbon was a gentle and welcome reminder that I’m teetering on edge of the European continent.

As the westernmost European capital, Lisbon is at the end of Europe. But this is not a hemmed in backwater of a city. Instead, Lisbon’s position on the rocky edge of one world opened it up to new worlds across the vast grey mass of the Atlantic Ocean.

Though the Atlantic crashes into the shore just a few miles away down the Tagus, Lisbon has a relaxed, elegant feel. Spacious squares decorated in swirls of black and white paving are connected by long straight roads. Aging yellow tram cars trapeze up and down steep hills.

The city is awash with color, its buildings covered in acres of blue, yellow, and green tiles. The odd missing piece and crumbling façade only adding a touch of artistic decay.

A good part of Lisbon’s charm is owed to the fact that, unlike many European capitals, it was not devastated by the ravages of the World Wars. There was no need to reconstruct the city from scratch and much is original. Not that the city has always been so fortunate.

The elegant city of fountains and squares was born out of one of Europe’s greatest natural disasters. In 1755, a massive earthquake was followed by a tsunami that overwhelmed the lower parts of the city. The devastation swept away thousands of people and buildings leaving the city center a blank slate.

It’s not impossible to find traces of the pre-earthquake city though. To do so I just had to head uphill. There are meant to be seven hills in Lisbon so walking around requires constant mini-hikes. In the summer this can be mild torture but once at the top, the breeze and the view are worth it.

The angle differs from each hill but is always dominated by the terracotta of the city’s roof tiles punctuated by the odd church spire or cathedral dome.  You’ll also see cruise ships on weekends disgorging their vast armies of tourists into the city from their berths right on the riverbank.

Belem by Foot or by Bike

Descending in a criss-cross of winding lanes from the castle, the Alfama neighborhood is a tenuous link to Lisbon’s Moorish past which survived the destruction of 1755.

Characterized by narrow tightly packed streets and cramped little squares, I was forever getting lost in Alfama.

Eventually, I memorized a few favorite pieces of the tiled mosaics which line the walls so I could find my way around. Large parts of Lisbon are decorated in tiles, azulejo, with blue on white being the traditional scheme. Sometimes they are arranged in simple geometric patterns but often they form detailed mosaic images.

Even when chipped or broken, as they often are in run-down Alfama, the azulejo beautifully and colorfully adorn the city. Famously, the neighborhood is home to Fado, the traditional music of Lisbon, and in the warm evenings, the streets are animated by its melancholic notes fluttering out of bars and restaurants.

Leaving behind Lisbon’s Muslim heritage, I took a tram along the Tagus river to the district of Belem. This flat piece of ground on the river bank is forever linked to Portugal’s Age of Discovery as it was the launch point for the famous voyages of exploration which opened up the world from the end of the 15th century.

In 1497 Vasco da Gama, after a night of prayer at Belem, sailed down the Tagus and off toward India.

Belem is a great place to discover by bike. Check out the guided bike tours offered by Bike Iberia, or rent a few bikes for your own adventure on the city’s nine-kilometer bike trail along the Tagus river. Read more about biking in Lisbon on Max Hartshorne’s blog.

Belem’s other claim to fame is pastry. Getting off the tram, I headed straight into a large queue stretching out the door and around the corner of the blue-tiled shop said to be the home of the pasteis de nata.

Ubiquitous in Lisbon, the pasteis de nata are extremely sweet custards filling a flaky pastry base which is then baked close to burnt. With my sweet tooth sated I moved on to the Jeronimos Monastery.

The ornate monastery building is held to be the height of the native Portuguese Manueline style of architecture. Manueline style created a series of buildings covered in elaborately carved details. With the voyages of discovery underway, architects drew on a great number of influences when building Jeronimos.

The monastery’s gleaming white façade is ornamented by a series of short spires and spikes. The doors and arches of the monastery are surrounded by numerous small sculptures and intricate details. Jeronimos is not the heavy dark religious building of northern Europe which bears down on the visitor. Instead, it fits in with Lisbon’s general light elegance.

Inside the monastery, Vasco da Gama is entombed beneath a stone effigy laying on its back with hands upright and clasped in prayer. Another fine example of the Manueline style sits close to the monastery.

The Torre de Belem now serves as Portugal’s national symbol and icon. Though built as a 16th-century defensive tower, it is clear that the architects wanted something which served an aesthetic and not just defensive purpose. As a result, the squat tower looks closer to a work of art than an instrument of war.

A real highlight in Lisbon was built in 2014, when the Mercado da Ribeira was created, from a vast food warehouse to an airy collection of food stalls, wine bars, and cafes, all arranged in a rectangle. You choose from the country’s top chefs, who cook for you in their small booths and join strangers at long tables.

As the Tagus gently laps against the Torre de Belem it is easy to see the river as a calm benign force allowing the city to turn its position on the edge of Europe into an advantage. Come November 1755 however, this charming relationship with the water turned sour.

There are few surviving fragments of the city which were washed away by the tsunami and most of the Baixa neighborhood was built as part of a huge reconstruction project. The result is a logical town plan which creates a great contrast with the older, less ordered neighborhoods such as Alfama.

\Long, straight streets connect a series of squares centered on statues, columns, and fountains. Walking along these streets was not the traffic-choked stress-inducing experience most cities offer but a calm shaded stroll beneath the trees.

There is an impressive exhibit here below the tower that takes visitors back to the terrible day of November 1, 1755, when a huge earthquake almost totally destroyed the city of Lisbon and surroundings. With motion, sound effects and creative use of projectors you get to experience the event and learn about what happened during the 8.5 richter scale disaster. Lisboa Story Centre

The squares of Baixa are lined by various cafés, hotels and restaurants. Sitting in one café, I watched the shadow of the setting sun slowly spread across a pattern of black and white paving stones. The sounds were gentle,the splashing water of the fountains and the rattling and bells of trams. The flaky pastry of a pasteis de nata crumbled at the touch and there certainly didn’t seem to be any roughness to this edge of Europe.

Find out more about visiting Lisbon at the city’s tourism website, and check SATA airlines for cheap flights direct from Boston to Lisbon and the Azore Islands from the US. 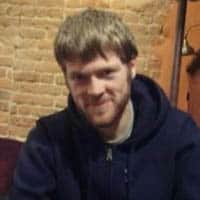 Neil Middleton studied archeology in college in England, so he’s become fascinated with the historical sides of the places he visits. He lives in England.