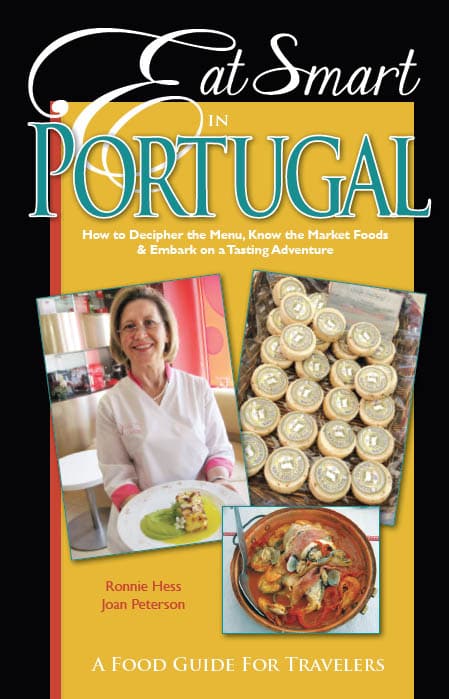 Portuguese country-style home cooking and Michelin-rated restaurants receive equal treatment in this newest addition to the Eat Smart series of culinary travel guidebooks. A huge variety of seafood, rice, and spices from around the world acknowledge Portugal’s history as a seafaring nation.

Hundreds of different breads and cakes also underscore local traditions. Eat Smart in Portugal: How to Decipher the Menu, Know the Market Foods & Embark on a Tasting Adventure

connects menus and markets to geography, history, and regional pride.

A Menu Guide that demystifies food selection, allowing visitors to order with confidence

A Food and Flavors Guide that provides a comprehensive list of foods, spices, and more to assist shoppers at colorful markets

An explanation of culinary history that covers the origins and varieties of ingredients, regional recipes, and well-known Portuguese favorites
a translation of useful phrases that eases the challenge of shopping for food or placing an order in restaurants

Glossaries that introduce food and cooking terms in Portuguese and English.

Excerpt from the Book: Portuguese Food in a Nutshell

“Bread always was, and still is, a structuring element of our nourishment,” says Virgílio Nogueiro Gomes, an author who specializes in Portuguese gastronomy.

Gomes grew up in the northeastern Trás-os-Montes region and recalls that the best-tasting bread for him was rye bread, especially in winter, when it was toasted over an open fire, then spread with lard. Cookbook writer Edite Vieira remembers “coffee migas” as a special treat when, as a child, she visited her grandmother at the family farm east of Lisbon.

At breakfast, Vieira’s bread would be crumbled into black coffee along with a sprinkling of sugar.

Beyond breakfast, bread is found in lunch- and dinner-time soups and stews. These are the sopas, açordas, ensopados, and migas that are usually, but not always, distinguishable by their bread-to-liquid ratio. Migas is the driest category of the group.

Bread is Key in Portuguese Cooking

Bread can be included in a glass of wine as a midday pick-me-up, called sopa de cavalho cansado, or tired horse soup. In difficult times, parents sometimes fed this to their children to take the edge off their appetite. Bread also can be incorporated into a dessert, such as sweet and sticky rabanadas,  Portugal’s version of French toast.

Pão is the Portuguese word for bread, but not all bread goes by that name. Broa is cornbread made from cornmeal and other flours, but it is dense and bready, not cake like. It is a food that is associated with the Minho region in northwestern Portugal and is traditionally served with caldo verde, the country’s iconic greens soup.

Pão de ló, however, isn’t bread at all; rather, it’s an airy sponge cake. Folar is a meat-studded loaf, unless it’s sweet and filled with anise or cinnamon, or eggs at Easter. Smaller wheat breads go by names such as padas, papo-secos, bicas, bijús (from the French word bijou, or jewel), to name a few.

In short, there are dozens of Portuguese breads across the country, varying in ingredients, size, shape, proofing and baking times, color, texture, and taste. Flour, salt, water, and yeast might be the only constants.

Portugal is a significant wheat-producing country in Europe. But bread is not always made of wheat. In Portugal, bread is also made from rye, barley, chestnut, and corn, which came from the New World. Bread can vary by region and by grain. Here’s a very general rule of thumb: wheat in the south, corn in the northwest, and rye in the east.

French social anthropologist Mouette Barboff writes that corn was introduced in Portugal by 1525 and grown in the northwestern part of the country because of the region’s favorable climate—warm and humid. Ground corn replaced the more traditional millet in bread making, but the two cereals once shared the same name, milho. (Technically, milho miudo or small millet is millet, whereas milho grosso or large millet is corn.

Broa, also once called borona, originally referred to millet bread.) Rye (centeio) can be incorporated into broa to add gluten, making the dough lighter. Rye is used in wheat breads as well, to give them a more robust taste, and to extend shelf life. Although corn was at one time the principal cereal for bread making, it was surpassed in the 20th century by wheat (trigo), grown mostly east of Lisbon, on the plains of the Alentejo.

Bread could be an indicator of social class. White or wheat bread was initially more expensive and therefore eaten by the wealthy. Rye and corn bread were deemed food for peasants.

Not long ago, people from the Alentejo looked down their noses at folks from the Minho, calling them corn pickers (picamilhos) and disparaging their broa as so much birdseed.

As a structural element, bread figures prominently in soups. What better way to use it up if it has become stale? What better way to thicken a dish? Portuguese soups (sopas) can be as soothing as canja, made with chicken and rice; or as thick, flavor-packed, and nutritious as a vegetable purée.

Its Latin name, Brassica oleracea, classifies couve galega with a variety of plants in the   cabbage family. The soup was recently named one the Seven Marvels of Portuguese Gastronomy by popular vote, along with suckling pig, alheira sausage, grilled sardines, seafood and rice, custard tarts, and Serra da Estrela cheese.

More substantial dishes are the açordas, featuring, for example, a mash of cilantro, garlic, and water, topped with a poached egg; or thicker, breadier ensopados and migas. There are also caldeiradas, soupy stews brimming with fish, shellfish, and vegetables.

Writer and poet Ronnie Hess grew up in New York City, attended the Lycée Français de New York and Julia Richman High School, and graduated from Hunter College, the City University of New York. She earned a master’s degree in history from the University of Wisconsin-Madison.

She began a career in broadcast journalism at Wisconsin Public Radio. In the 1980s, she was a reporter/producer for CBS News in Paris, spending nearly four years in France reporting on political, social, and cultural issues.

After she returned to the Midwest, she worked for Minnesota Public Radio and Chicago Public Radio and was a freelance writer/producer for the “American Justice” series that aired on A&E. Returning to UW-Madison, she became director of communications in the Division of International Studies. During a sabbatical year, from 2004 to 2005, she taught middle school English in France.

She has contributed to many publications – national, regional and local – including Saveur, The Christian Science Monitor, and The Milwaukee Journal Sentinel. She was a restaurant critic for several years for Madison Magazine and was a freelance art critic for The Capital Times.

Joan Peterson, Ph.D., is the author and publisher of the EAT SMART series of guidebooks for travelers and cookbook lovers, who want to get to the heart of a country’s culture through its cuisine.

Her first guide, Eat Smart in Brazil: How to Decipher the Menu, Know the Market Foods & Embark on a Tasting Adventure

, was so enthusiastically received by travelers, foodies—and especially Brazilians—that Joan set aside her career as a biochemist at the University of Wisconsin in the early 90s to devote full time to another passion: helping others navigate menus and markets in foreign countries.

Joan is a founding member of CHEW (Culinary History Enthusiasts of Wisconsin). In between her writing projects, she leads culinary tours to Europe, Asia, and Africa.

Buy this book on Amazon: Eat Smart in Portugal: How to Decipher the Menu, Know the Market Foods & Embark on a Tasting Adventure