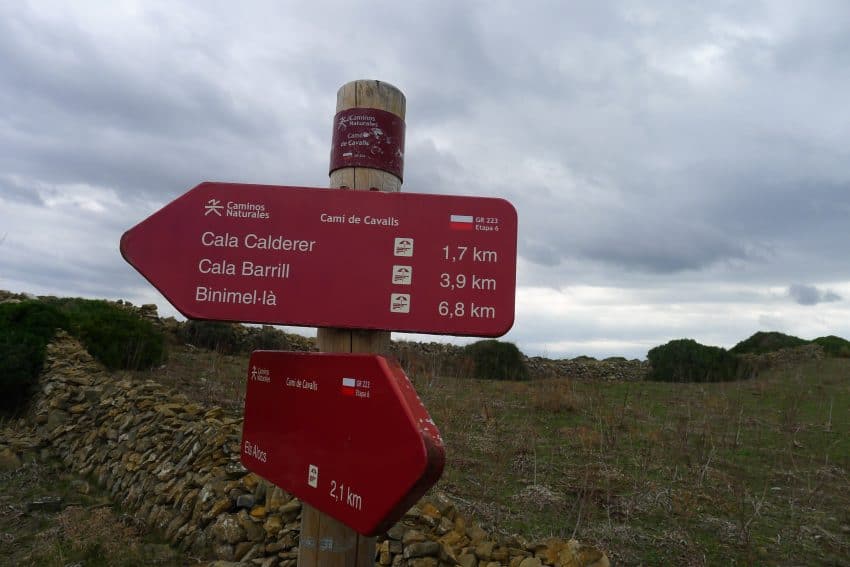 There’s a trail that circumnavigates a small Mediterranean island off the coast of Spain called Menorca and it is a traveler’s dream.

Whether you prefer trekking on your own or being guided by an expert, the 116-mile Cami de Cavalls offers weeks of travel through every geographic pocket of Menorca.

Its name quite literally, means “The horse trail,” and for good reason. The Cami de Cavalls is an ancient path circumnavigating Menorca that dates back to as early as the 14th Century.

Once used by horsemen to patrol the island between watchtowers, it now beckons to trekkers, cyclists, and the occasional equestrian.

“The history of this path is well-documented,” according to the “Cami de Cavalls Guidebook,” published by Fundacio Desti Menorca.

“The first known map of the island dates back to 1780 … and the pathway is clearly marked.”

In the 1780s, the Spanish Governor Count Cifuentes is quoted as saying, “let the pathway known as a bridleway be kept open and free for all those who wish to travel.”

It seemed only natural, then, that when presented the chance to travel today’s well-preserved Cami de Cavalls, I selected a horse as my companion. How better to recreate the trail’s original intent than astride a beautiful Menorcan mare?

From my saddle, I looked out at the expanse of the Mediterranean Sea and marveled at the view. The deafening waves crashed off the nearly vertical cliffs below and the smell of fresh sea spray enveloped the air around me. I drew in deep, soul-cleansing breaths that kept my anxiety over hurtling off the cliffs at bay.

The path is a study in contrasts. Some of it flat and obstacle-free, but most of it rocky and steep, it seems impossible that a horse could navigate its near-vertical, cliffside route.

Yet here is where history and culture collide.

Today, horses that are descendants of the great stallions once used to patrol the island have adapted to the rocky terrain. These Menorquin horses have an uncanny ability to pick through the path with reassuring agility.

Our guide gave us one simple instruction during our weeklong trek: “Trust the horses.” The horses did not disappoint.

Menorquins possess spirited independence that has been bred into them for centuries. One of the island’s best-known traditions is simply called “Festival,” the biggest of which is the Sant Joan Fiestas, held in late June in the center of Ciutadella, one of Menorca’s largest cities.

Here, thousands of revelers celebrate the patron Saint John the Baptist, and the Menorquin stallion is at center stage. Men known as los caixers y cavallers wear black-and-white and adorn their horses with ribbons and multicolored rosettes. As los caixers y cavallers parade through town, their stallions rear up and walk on their hind legs amid the cheering crowd.

Only the most respected and qualified of riders are allowed into the annual event, and families prepare nearly a year in advance for this one weekend.

These coveted stallions are too rambunctious for most vacationing equestrians, so on the Cami de Cavalls, guides Maria Elena Dendaluce and Catalina Florit offer well-trained mares that know the trail well.

And this gives one confidence, knowing that these horses are bred for the work they will be doing.

Traveling this path with a guide is not required – but finding a thoroughbred Menorquin on which to ride can be tough.

Where most breeds would balk at this terrain, Menorquin horses simply climb. As an inexperienced rider, I felt reassured knowing that while I was holding the reins, the real brains behind this adventure were the horses.

Traveling with the Pros

Our trek, called “The Unknown Views of Menorca,” included five days of challenging riding along some of the most scenic sections of the trail. Our group, comprised of riders from around the world, spent our nights at picturesque inns and villas.

We enjoyed authentic, finely prepared meals at off-the-beaten-track places – sometimes set up picnic-style right on the beaches, at others in candlelit restaurant dining rooms and still others in the homes of locals who have farmed and raised Menorquins for centuries.

This “rugged adventure-meets-plush pampering” lifestyle restarted each morning, as we emerged from our rooms, cleaned up, well fed and ready for another day of climbing cliffs.

My horse’s name was Xirola, and within my first hour of riding her, I came to trust her completely. I figured she had me pegged as inexperienced immediately. However, she did not take advantage of this lack of horsemanship, rather seemed to adjust to my awkward maneuvers and forge ahead patiently.

On the uphills, I followed the lead of the veteran riders in our group, leaning slightly forward in the saddle to balance my weight. On the near-vertical descents, I likewise leaned back in the saddle, silently repeating Florit’s advice to trust the horses, as they picked their way amid the loose rocks.

In five days of riding, we covered roughly 60 miles of terrain – about half of the entire Cami de Cavalls, yet the most scenic. The first three days we traveled along the more rugged and remote northern part of the island, while the last two days were spent in the warmer, southern region, where we often dipped into canyons and verdant, green forests before popping out again along the ocean.

Often, we would traverse right into touristy, seaside towns, clopping along the streets, in a 10-horse conga line that drew surprised stares from the swimsuit-clad sunbathers.

On our fourth afternoon, we emerged from the forest and approached the small tourist town of Santo Tomás, which featured a large beach and would be a stopping point for our lunch.

I assumed we would skirt around the town’s edge, but instead Florit directed us along a boardwalk packed with tourists.

There we paraded by while kids wrapped in beach towels shrieked “caballo, caballo!” to their parents.

We reached our destination, Es Brucs, a cliffside restaurant with an expansive view of the sea and featuring locally caught seafood.

Here, we would spend nearly two hours eating at the leisurely European pace that allows one to fully savor the food, friendship, and surroundings.

Indeed Menorca is a special place in an already special country, a microcosm of Spanish culture that is even slower-paced and less crowded — especially when compared to busy Mallorca. But it’s the people, too, that make this location memorable. Dendaluce and Florit make a strong, two-woman team.

Dendaluce, with her open, genuine smiles and Florit, with her independent, capable horsemanship are a reassuring presence as we clambered up and down steep, dangerous sections of trail.

Out of the Saddle

After long days in the saddle, we would gather again to eat family-style, and Dendaluce would regale us with stories of past riding adventures with clients and friends from around the world.

A joyful mix of languages and laughter punctuated the air, amid much gesturing and nodding. And always the wine flowed.

Meals were not so much about sustenance as an event in and of themselves and we sampled the seafood-rich island cuisine with gusto.

Dendaluce said each trip is different, depending on the makeup of her clients, but every trip is memorable.

Menorca, by its very nature of slow-paced, technical climbing, is more challenging than the trips she offers on the mainland. And the beauty of the island makes it a more contemplative, nature-inspired experience.

“The views, the sea, the pace, the ‘silence’ as we ride in a single file – usually riders are quieter, you are more with yourself,” she said of the Menorca trip. “It’s a comforting ride.”

The island’s rich horsemanship culture also makes an equestrian trip here more meaningful. The long lineage of the Menorquin influences not only family ties on the island, but also where people chose to live and even how they built their houses.

On a tour in Ciutadella de Menorca, we walked the cobblestone streets of this beautiful city, while our guide Lluis Ameller explained why the main doors of many of the nobility’s homes are so large – to accommodate their impressive Menorquin stallions who would be brought indoors after Festival.

“The Mediterranean is definitely a distinctive part of the Spanish history,” Dendaluce said. “Menorca, having its own breed of horses, the Menorquin, made it even more unique.”

By the fifth day of riding, I knew exactly how Dendaluce felt. Despite my lack of riding experience, and the jitters over the challenging terrain (and it was challenging. If you come here, make sure you are in good shape), there is a magic to this island that I knew would bring me back again. Indeed, experiencing Menorca by horseback offers a distinctly “unknown view,” a unique perspective that combines soft adventure with a deep appreciation for the island’s equestrian heritage.

• The best time to visit Menorca is in the spring and autumn, as it gets quite busy with European travelers at the height of summer.

• Information on trips throughout Spain, for both independent travelers or those who want guided trips, can be found at www.spain.info.

• Cycling and hiking also are popular on the island, and many trekkers travel the Cami de Cavalls on foot. For details on Menorca in general, visit www.menorca.es. 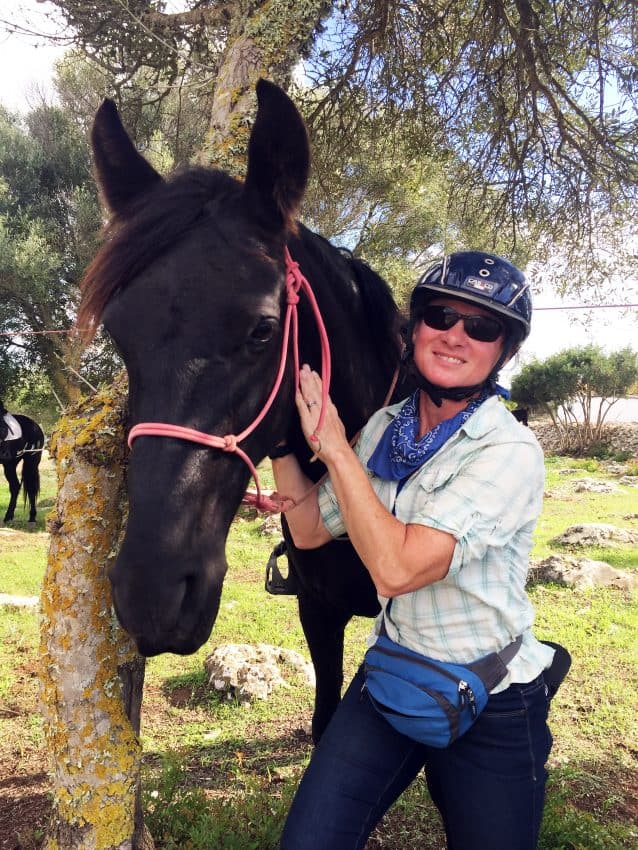 Melissa DeVaughn is a longtime adventure, outdoors, and travel writer living in Eagle River, Alaska. She began her writing career after hiking the 2,100-mile Appalachian Trail in 1993 and has not looked back since. She was an outdoors writer at the Anchorage (Alaska) Daily News until she took up full-time freelancing in 2008.