Romania’s Transfăgărășan winds through the Fagaras Mountains, part of the Carpathian Mountain Range that connects Transylvania to Wallachia via a shocking series of white-knuckle hairpin turns and sharp descents.

The 56-mile path climbs to an altitude of 6,699 feet, slinking past stunning outlooks of the lake, waterfalls, and a dam.

After our initial arrival and two days in Bucharest, our group of six was itching to move on to the real target of our trip: Transylvania.

Putting aside all the hype and myths about “Count Dracula,” Transylvania is spilling over with some of the best-preserved medieval cities in Europe – Sibiu, Sighisoara, Brasov, Rupea, Rosnov.

Best way to get there? The Transfăgărășan. But it’s not just a method of transportation; it’s an epic journey unto itself, and one of the highlights of Romania.

History of the Road

Originally called “Ceausescu’s Folly,” Communist dictator Nicolae Ceausescu ordered the road to be constructed in 1970 as a strategic military escape route in the event of a Soviet attack.

Like many of the egomaniac’s other projects, the road made no sense, since it was only passable five months out of the year, yet he persisted. 6,000 tons of dynamite was used to blast the rock.

Officially 38 workers died in the brutal conditions they were forced to work in, but that’s widely regarded to be an underestimate.

The well-known BBC car show came to Romania in 2009 and introduced the Transfăgărășan (aka DN7C and the Transylvanian Alps) to much of the world. After spending a day filming throughout the mountain road and tunnels, Top Gear’s Jeremy Clarkson declared it “the best road in the world” a title the presenters had previously given to the Stelvio Pass in Italy.

Apparently, there was a delay in part of the shooting when a bear sow and her cubs appeared out of nowhere in the middle of the road and lingered for a while. But the Top Gear crew waited patiently without disturbing them, all-in-all enhancing the experience.

The 13th-century castle is significant in that it is the “real” castle of Vlad the Impaler, the actual Romanian ruler on which Bram Stoker loosely based his fictional character “Dracula.”

Vlad earned his nickname by impaling and brutally torturing his enemies. While nowhere near as impressive as Bran Castle which has come to be associated with Vlad even though he never lived there, Poenari was one of Vlad’s main fortresses.

Legend has it that Vlad’s wife committed suicide from this fortress rather than be taken hostage by the Turks. Access to the citadel is made by climbing the 1,480 concrete stairs.

“Stop!” we yelled out to our JayWay driver, followed by a loud screech. We had come upon Vidaru Dam and everyone wanted out. Even though the Transfăgărășan passes over the curved wall, the views and dam itself are so attractive, we wanted to walk along the side and capture it on film.

When completed in 1966, it ranked 5th largest in Europe, and 9th in the world and can produce as much as 400 GWh of power per year. The dam is an impressive 545 feet high, but I have no fear of heights so walking close to the edge was invigorating!

Vidaru Lake is a man-made reservoir created in 1965 by the construction of the Vidraru Dam on the Argeș River. Thick forests and mountains surrounding the sandy shores of the shimmering aquamarine lake make it a perfect photographic backdrop. The lake is popular for water sports like fishing, windsurfing, paddle boating, kayaking and water skiing.

After driving through Bâlea Tunnel, Romania’s longest and very narrow tunnel (2,910 feet), we arrived at the zenith of our journey. Balea Lake is a glacial lake with icy mirror-like water surrounded by craggy mountains and cloaked in a thick fog for most of the year. It is much colder here at the Transfăgărășan’s highest point, and the glacier lake maintains ice and snow well into June.

There’s a chalet-style lodge at the top with nice views across the glimmering lake. The lodge has an outdoor seating area to take advantage of the views, but it the wind was extraordinarily blustery and frigid, so we sought refuge inside.

Truth be told, the lodge is a good spot for a bathroom break, but the service in the restaurant was among the worst I’ve ever experienced and the prices were high for the area. There aren’t many alternative choices around, but unless you’re starving, I’d suggest skipping it.

You could try ordering something simple like a beer and bowl of soup, but be prepared for a long wait… and for the waiter to keep forgetting what you ordered.

The Transfăgărășan is closed in the winter, but there’s a cable car that goes to the summit. The first ice hotel was built here in 2006, using ice from the frozen lake, and has been re-constructed every December, closing when the ice begins to melt in April.

This was by far my favorite part of the passage. Luckily we had a patient driver because one of us was always calling out to stop. How could we not take advantage? The views were beyond our expectations. Serpentine turns everywhere. Adrenaline-spiking drop-offs in sections where there were no barriers separating you from a 1,000-foot sheer drop-off.

We stopped frequently which added time to our trip, especially since we were also shooting drone footage. Sitting precariously at the edge of one of the drop-offs, I felt the chilly air assault my cheeks as I took in the smells and sights of the crisscrossing paths juxtaposed against a landscape that was both lush and harsh at the same time.

On the descent after our stop at Bâlea Lake, the scenery was different. Views of the craggy cliffs were replaced by dense alpine forests and eventually meadows.

Who needs rollercoasters when you have the Transfăgărășan?

Fast Facts about the Transfăgărășan

Disclosure: The author was the guest of JayWay Travel during her stay in Romania, but as always, the opinions, reviews, and experiences are her own. 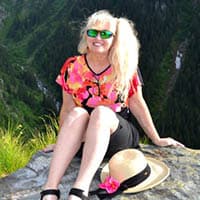 Patti Morrow is a freelance travel writer based in South Carolina with over 150 bylines in 35+ print and online publications, author of the book “Girls Go Solo: Tips for Women Traveling Alone,” and editor of the award-winning travel blog Luggage and Lipstick.

Read more of her stories on GoNOMAD:

Find out more about Transylvania