Logging in the Congo

The storm was right on top of us. A flash of lightning illuminated the Niari River and the railroad bridge we had driven across earlier that afternoon in stark black-and-white.

The thunder that followed almost instantly was not a rumble or even a clap, but the sharp crack of a whip. The rain came down in sheets, clattering onto the tin roof with enough noise that we had to shout to be heard over it.

We were a group of nine overlanders, traveling the length of Africa in our own vehicles. We had made contact with Alan, the owner of a logging company in the Republic of Congo, who had generously offered us a place to stay.

Normally we would have been content to sleep in our vehicles, but tonight we were very happy to be watching the storm play out from the dry verandah of the company’s guesthouse. Alan’s Congolese chef, Luc, had even prepared an excellent meal for us.

Alan’s company has a concession from the Congolese government to log about 50 square kilometers, or 300,000 hectares, of the Congo River basin.

The company harvests an average of one tree per hectare and takes about 40 trees per day generating 2500 cubic meters of hard and softwoods per month. Because of the high cost of transporting the timber 150 km to the coast for export, only species that fetch high prices on the world market are exploited.

The next day dawned clear and Alan offered to take us to the forest for a firsthand look at where our fine hardwood dining tables and coffee tables come from. We followed him in our vehicles as we made our way slowly up into the concession along muddy, water-covered roads. Alan employs Congolese pygmies to identify trees for harvest based on type and size.

He introduced us to a team of five laborers who were about to fell a tree that had been previously identified. They hacked a footpath through the forest with machetes for us as we followed them for about 30 minutes into the forest.

At one point I looked back and realized that even with the crude path, I would be hopelessly lost without our guides to show us the way back to the road.

Our group looked on quietly as four of the team used machetes to clear the bark around the base of the tree so that it wouldn’t foul the chainsaw. One man, wielding the chainsaw instead of a machete, sat quietly on the ground with a file sharpening the blade of the saw.

Inspecting the tree, they discussed which way it would fall and cleared a path through the underbrush in the opposite direction in case they were wrong.

Ten Minutes with a Chainsaw

It took ten minutes of work with the chainsaw to finish the job. The tree seemed to settle heavily on itself, and then slowly arcing away from us, it cracked and splintered lesser trees in its path as it crashed to the ground.

Light spilled through the newly created opening in the forest canopy, bathing the black faces of the workers in sunlight, illuminating the beads of sweat standing out prominently on their lean and heavily muscled bodies.

The team went about their work professionally and quietly. They were proud of their work, and after the tree had been felled they posed for us around the tree stump displaying the tools of their trade. In a place where jobs are hard to come by, theirs was an enviable career.

Logging is one of the largest industries in Central Africa. According to a recent study by the Japan-based International Tropical Timber Organization (ITTO), 40% of Central Africa’s remaining undisturbed forest now lies within forestry concessions.

The study indicates that selective harvesting, of the type done on Alan’s concession, is a sustainable practice. Problems arise, however, due to the increased access to forest areas provided by logging roads.

Illegal logging is one such problem, but far worse is the practice by locals of hunting bush meat, including forest antelope, bush pigs, primates, and forest elephants. In some areas, hunting provides up to 80% of the protein in the average diet.

The cost of wood

Back at the road, we were reunited with Alan, who was standing near an enormous Caterpillar bulldozer. Climb onto the machine, he said, and you will see why wood is expensive.

As we climbed aboard, I couldn’t help thinking that this was far from your typical tourist experience, even in Central Africa. We were about to extract a different tree from the forest, one that had been felled a few days earlier and had been cleared of limbs so that it could be brought out to a road.

Getting to the tree, through virgin forest, is an exercise in pure brute force. The Cat’s massive diesel rumbled to life, and after driving for a few minutes the operator turned left, seemingly at random, into the forest.

As we pushed our way into the forest I was glad for the steel cage that surrounds the machine’s cab as limbs from falling trees began crashing down on top of us.

The 40-ton machine drove straight through anything less than about 10 cm in diameter and maneuvered around larger trees to reach the target log. Workers attached a steel winch cable to the log and the operator pulled the log out to the road, where a truck would collect it for transport to the sea.

Alan told us that these machines cost about a half-million dollars each and that he expects one to last four years before requiring replacement.

Cat engineers, he said, visit his operation to learn what breaks the machines and how to make them stronger. Throughout our visit, Alan seemed eager to show us how difficult it is to extract this wood from the forest.

I asked him whether he’d had any problems with environmentalists. “Not yet,” he said. The Chinese on their concessions, he said, clear-cut the land, so he wasn’t too concerned for his operation.

Although the ITTO study indicates that selective logging is a sustainable practice, some environmental groups disagree. Sustainable or not, though, as long as there exists a demand for exotic hardwoods, tropical forests in Central Africa and elsewhere will be exploited to provide them.

The industry provides much-needed jobs and income for local people and their governments. With proper management plans and honest governments that re-invests taxes from logging, Central Africa’s forests can continue to provide for the world demand for timber without being destroyed in the process. 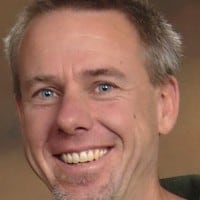 Witt Sparks is a software engineer who lives in Western Colorado, USA. He has traveled in Europe, Asia, Africa, and South America, and enjoys a variety of outdoor activities.