Iskan Street: A Look at Food and Culture in Erbil, Kurdistan, Iraq

I am sitting on a pillowed couch savoring the zest of lemon on my chicken kebab, the music is deafening.

Along the sidewalk, people cheer in front of massive television screens playing the latest football matches from Europe as cars slowly maneuver through the congested street, their horns blaring. Suddenly, the lights go out. There is silence.

Then a deep methodic hum fills the air as the generators kick in. The lights come back on. The music is as loud as ever.

Only now, some of the cheers have been replaced by groans at the realization that Barca had just put one in the net. This is Iskan.

A Street is Born

It is perhaps somewhat surprising that vibrant nightlife can be found just 80 km east of Mosul where Iraqi and Peshmerga forces are gripped in a fierce battle with the Islamic State.

But despite its proximity to the front lines, the Kurdistan region of Iraq (and in particular its capital city of Erbil) is remarkably safe.

Buttressed by a robust and professional security apparatus that at times can often feel a bit overkill, the area has been spared from the violence that has plagued Iraq since the 2003 US-led invasion.

Kurdistan’s stability has been a boon for Erbil, attracting foreign investors and a handful of intrepid tourists. It also provided the conditions for the creation of a thriving street food scene centered on Iskan Street.

During the day, Iskan is just another non-descript road lined with small shops and a few restaurants. But at night a hoard of food carts descend upon the area, transforming it into a hotspot of Kurdish male culture.

And I do mean male, for women are scarcely seen apart from an occasional family or two out for a quick bite. In a certain sense, it’s an unofficial boys club, where Erbil’s men gather every evening to discuss politics, watch sports, or just blow smoke at one of the numerous shisha cafes. As innocuous as these activities may seem today, they were unthinkable just over a decade ago under Saddam Hussein.

Iskan, though, is mostly known for its food, especially, its Kebabs. The street is literally lined with carts of freshly slaughtered lambs suspended from metallic racks.

The meat is then skewered and prepared above burning coals before being served alongside vegetables and flatbread to hungry patrons. Kefta, ground meat mixed with onions and spices, is also a popular variant.

Because the Kurdish people inhabit what are now the countries of Iraq, Syria, Turkey, and Iran, Kurdish cuisine is usually similar to many other Middle Eastern dishes but with its own regional twist. Iskan mainstay, kubba (the Middle Eastern version of a dumpling) is no exception.

Vegetarians have a number of options as well. Chief among them is ubiquitous falafel. Even meat lovers will find the hardy deep-fried chickpea patties stuffed inside pita bread satisfying.

Another treat not to be missed is şalgam. Şalgam translates to turnip but is actually a purple carrot.

Popular in Southern Turkey as a cool drink, in Erbil, şalgam is boiled and spiced in large vats and then served alongside a cup of the purple broth. The sweet and spicy mixture is especially pleasant on a cold day.

And visitors can’t leave Iskan without trying the local street Baklava, which tends to be thinner than its Turkish cousin to the north. The delicious squares are a perfect accompaniment to a glass of tea.

If Iskan Street is known for its food, it’s its people that make it truly amazing. Iskan means people, and Iskan Street is literally the Peoples’ Street. In fact, Iskan, with its diverse mix of Kurds from around the Middle East, is usually the first stop for local reporters attempting to get a sense of public opinion.

Christians, Sunni, Shia, and even Yazidi mingle here as they eat, drink, and smoke. In a region where sectarian strife is all too common, it’s truly uplifting to see religious differences take a backseat to football rivalries, even if the latter can become rather heated.

Sadly, these days, Iskan is also filled with Kurdish refugees escaping the violence in Syria and Iraq. I met one Syrian refugee, Sileman, tending a şalgam cart.

He had fled the Syrian town of Al-Dimas, outside of Damascus, at the onset of the Syrian civil war. Sileman told me he was brought to Erbil by UNICEF.

He was lucky. Many of Syria’s refugees are confined to camps, long lines of white tents encircled by cinderblock walls and barbed wire.

Security is tight, and travel outside the camp is severely restricted. Although safe, work and education options are limited, and boredom is rife.

Over a plate of sliced turnips, Sileman told me that he had been a businessman before the war. Now, he has nothing and is barely eking out a living selling şalgam at 1,000 dinars (less than one US dollar).

“You Are a Guest”

As glad as he was to have escaped the war, he was not happy. “My father is sick,” he told me. “This is not a happy time.”   So ingrained is Kurdish hospitality, Sileman refused to accept payment. “You are a guest,” he said. “You are welcomed.”

Other Kurds that I talked to on Iskan faced similar difficulties. The collapse of oil prices and the war with Daesh (the Arabic acronym for ISIS) has forced Kurdistan into a recession, with investors choosing to sit out the conflict on the sidelines. Yet, the Kurds remain stubbornly optimistic.

The recent offensive in Mosul has renewed hope that the war will soon be over and that foreign companies will return to Erbil, which only a few years ago was dubbed “the new Dubai.” And while it remains to be seen whether Erbil is on the cusp of an economic resurgence, there is no doubt that Iskan will certainly be there waiting, as vivacious and colorful as ever.

Iskan Street is located only a few blocks from the Hawler Museum in the south of Erbil. The street runs from the ring road (Kurdistan) to Barzany Namr. A taxi ride should cost no more than 5,000 dinars from anywhere in the city.

Iraqi Kurdistan is an extremely safe place to visit with the exception of Mosul in the west and Kirkuk in the south. Foreigners are unlikely to find themselves in either city as most transport tends to avoid both, and military checkpoints are extensive in these areas and will likely turn any foreigner back for their own safety.

Although at times they can seem somewhat intimidating, the Peshmerga (Kurdistan’s military force) is both highly professional and courteous.

Women may feel uncomfortable visiting Iskan by themselves as this is a male-dominated area. Despite its openness to foreigners, Kurdistan remains a conservative and patriarchal society, where women are generally expected to be at home by dark.

Most Kurds are aware of the cultural differences with Western countries and afford foreign women a greater degree of freedom; however, it may be best to visit Iskan in the late afternoon or accompanied by a male to avoid unwanted attention. 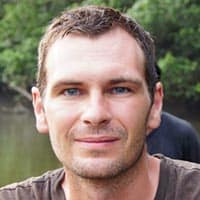 Chris Bentley is a due diligence consultant and “professional” globetrotter, who is currently living in France.