Amsterdam, NY: The Erie Canal is Overflowing with History

Experiencing the Erie Canal from aboard Tug, Governor Cleveland

Not many people, at least from this century, can say they rode the original Tug Governor Cleveland. This historic tugboat acquired in 1927, was originally used as an icebreaker on the New York State Canal

System. And the ancient tug’s present-day use is strictly work-related.

So, I was extremely lucky to view the canal from the deck of the Tug Cleveland. During a special ride that was made possible by my friends William Sweitzer and Anna Scherer of the New York State Canal Corporation, and Gina DaBiere-Gibbs of Montgomery County Tourism, I was able to witness the windy glory of the Erie Canal on one of the oldest tugboats to ever cross New York’s expansive canal system.

Unfortunately, because the Tug Governor Cleveland is not for commercial use, tourists can’t just hop on any given day. However, the boat is used as a part of a school program, along with another old tug known as the Urger, in which kids can learn about the canal through a hands-on experience.

But, there are still so many other ways to enjoy the rich history and beauty of the Erie Canal without even setting foot on a boat.

Bicentennial Celebration of the Canal

To commemorate the 200th anniversary of the building of the Erie Canal, numerous cities on the canal are hosting Bicentennial Celebrations starting in 2017. These celebrations are all about family fun, good food, entertainment, history, and of course, enjoying New York’s famous Erie Canal.

In Amsterdam, New York, the second and third events of the Erie Canal’s Bicentennial Celebration took off with a blast of fireworks at Amsterdam’s own Riverlink Park. 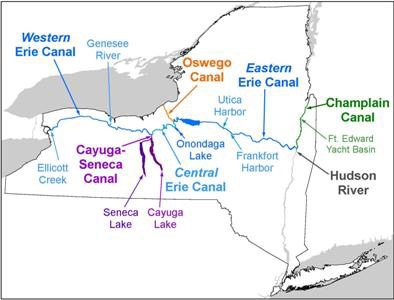 Riverlink Park is situated on Front Street in Amsterdam, New York, directly on the Erie Canal. The park is unique in its atmosphere and offerings, from its riverside restaurant to its flower-covered bridge.

I had an awesome lunch overlooking the canal at the Rivers Edge Cafe in the heart of Riverlink Park.

Along with this unique eatery, there were plenty of food trucks with treats such as fried Oreos and fried cheesecake sitting canalside for festivalgoers to enjoy.

And while you eat you can sing and dance along with, or just watch if you’re a bit shy, the various music performances at Riverlink Park.

The bandstand is right on the water and makes for a fun concert with an incredible atmosphere.

You should check out for all of the music offerings and more going on at Riverlink Park. No need to worry if you’re not a big fan of live music or if you miss any live performances because the park has even more to offer.

A playground for the kids with plenty of running space for the wild ones will make a fun day for children while the parents can sit back, relax, take in the canal views, and experience the park’s other features.

In 2013, a very cool monument that looks like it was taken directly from an ancient cave was added to the park. The

Stone-Age-looking-piece is a beautiful addition to the riverside park.

Not far from this artistic monument is a 9/11 memorial standing upright with flags surrounding it. On September 1, 2001, Flight 11 out of Boston turned around over Amsterdam, headed to New York City, and hit the North Tower of the World Trade Center.

Riverlink Park’s monument contains a concrete column from the North Tower as a reminder of the horrific events of 9/11.

After experiencing the memorial and stone painting, head towards the edge of the park to see the new pedestrian bridge connecting South Amsterdam to Riverlink Park and downtown Amsterdam.

Multiple aspects of the Mohawk Valley Gateway Overlook pedestrian bridge make it such an attractive spot within Riverlink Park. A plethora of colored flowers resides on the outskirts of the bridge leaving plenty of room for walking and biking.

Two glorious centerpieces, one being a reminder of Amsterdam’s former carpet mill presence, and the other being a homely spectacle of all things Amsterdam, overlook the Mohawk River towards Lock 11 of the Erie Canal.

The Wheel of Life mural holds the pattern of the Waldorf Astoria lobby’s famous carpet born in Amsterdam.

Placards located on the bridge’s railings can tell you even more about the “Carpet City,” along with other knowledge regarding the other masterpieces on the bridge.

All over the park and along the canal for that matter, history is present. Bill Sweitzer, said it best by noting, “no matter where you are on the canal, the history seeps into you–you can’t get away from it.”

Riverlink Park is one of upstate New York’s hidden tourist treasures that holds tons of things to see and do while experiencing the rich history of the Erie Canal. And it’s not the only place to go in the Fulton-Montgomery County area for a fun and history-filled time!

The Birthplace of the Erie Canal

Just under 15 minutes away from Riverlink Park is an area surrounded by history: The Schoharie Crossing State Historic Site. This specific landmark covers roughly four miles of land in Montgomery County and is unique for a variety of reasons.

Perhaps the coolest part about this site is that it is a snapshot of all three phases of the Erie Canal. Yes, the Schoharie Crossing State Historic Site exhibits the original Erie Canal, the enlarged Erie Canal, and the Barge Canal which is still in use.

Across from the site’s visitor center you can see the remains of the aqueducts that were once in use during the enlarged Erie Canal’s era. Said aqueducts were used to transport water from the Mohawk River to the Schoharie Creek.

Adjacent to the visitor center is the East Guard Lock marking the starting point of the original Erie Canal; the true beginning of the Erie Canal.

You can learn plenty about the canal’s birthplace at this site with informational placards located at the East Guard Lock and by talking to the friendly personnel on site, such as the Education Director David Brooks.

During a chat with David, I learned about the historical significance of the Erie Canal. Brooks said, “The depth and the riches of the history, there’s a complexity of the stories. Political, social, economic, and engineering history all interconnected through the canal.”

And he couldn’t be more right. The Erie Canal’s creation and history had roots in every major facet of society, and because of that fact, this country was able to grow, prosper, from cities and other settlements.

So before you brush this historical site off as a boring collection of stone, grass, and water, remember that America was practically born in this very spot.

One of the many Erie Canal Bicentennial Celebrations is also being held at the Schoharie Crossing State Historic Site. Down the road from the visitor center is Yankee Hill Lock, the Putman Canal Store, and a wonderful picnic area.

I was able to experience the festival firsthand and I had a lovely time. I didn’t utilize the pony rides or petting zoos, but I did indulge myself in the history and natural beauty of the area with ease.

The old portion of the canal at Yankee Hill Lock runs adjacent to the present-day canal with the old school Putman Canal Store in between the two. Observing the old canal’s build, you can see the more-than-100-year-old marks on the stones left by canal-goers centuries ago.

Apart from the visible history at this expansive landmark, there are accompanying breathtaking views. Anyone can enjoy a picnic or a romantic walk while gazing out at the canal.

Wooden tables every 50 feet or so are a perfect shady destination for a nice outdoor lunch. And this particular spot makes for a peaceful night under the upstate New York sky.

The Bicentennial Celebrations held at this site are also very family-friendly. Aside from the petting zoos and pony rides, kids can have fun at a magic show, enjoy live entertainment, ice cream, and tons of good food, including the aforementioned fried cheesecake.

I myself had some of the best sweet potato fries I had ever witnessed, accompanied by some raspberry jam that mad for a strange but delicious combination.

The Erie Canal Bicentennial Celebrations are happening across the state of New York for the next eight years so there’s no reason to be upset if you missed the celebration at Riverlink Park or Schoharie Crossing.

What more, both of these venues are far from done when it comes to hosting events.  and have all the intel on what’s happening at these locations in the future.

To find out about canal trails and various parks in the state of New York, visit this website. If you want to explore more parks and trails after you enjoy Riverlink Park and The Schoharie Crossing State Historic Site, this website will show you plenty of other places to explore.