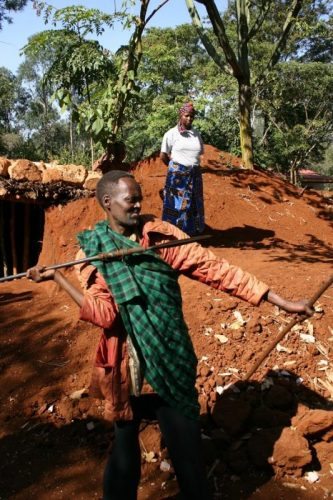 The man with the spear seemed to appear right next to me as if by magic, but rather than threatening me, his shy laugh told me I had found the tribe I had come to visit in Tanzania.

I was in the Africa’s  Great Rift Valley to see the Iraqw people, (pronounced  Iraky) a shy and retiring people, who claim descent from those of modern-day Iraq,  migrating to Africa centuries ago, but having little in common with that home country today.

They believe themselves to be descended from Mesopotamia because of the extreme differences in their language that uses entirely different stems for singular or plural words, from those of any other neighboring tribes.

But recent DNA testing has suggested that The Iraqw or Mbulu as they are called in local Swahili, are Cushitic people, related to the earliest migrators of the Fiome, and Burunge tribes, traveling into the areas south of Ngorongoro crater, originating in Ethiopia, then Kenya, and finally finding their way to Tanzania where they occupy a vast area of the Arusha and Manyara regions, numbering approximately 450,000 today. 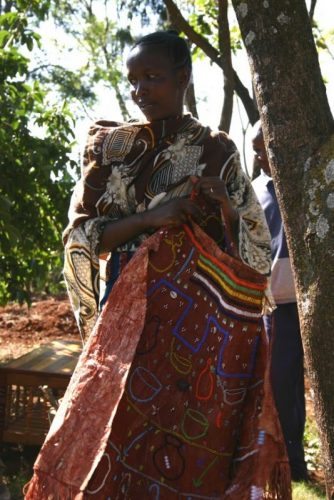 The dates of their original migration are generally fixed at about 2000 years ago. They are primarily Christian and Muslim pastoralists, raising cattle and goats and operate elaborate farms near the Great Rift, using sophisticated terracing, innovative irrigation techniques, and crop rotation before many other local people had thought of doing so.

This is another trait they have in common with the people of Iraq.

Their oral histories say that many generations ago they fought a massive battle against local tribes, possibly the Barbaig or Maasai, and were almost wiped out.  This devastating defeat caused them to begin living underground in an effort to escape total annihilation.

They would excavate a hole deep enough for several families to occupy, sink large tree trunks into the ground at intervals for support, then make a roof of crossed tree branches covered with leaves for insulation. They then covered the entire hole with the removed dirt, making only a small mound visible from above ground.

They planted the mound with grass and bushes, and sometimes small boulders, perfectly camouflaging them, and upon entering, would drag cut bushes behind them to cover the entrance, making their homes invisible unless you were right in front of it. These homes proved to be warm in the winter and cool in the summer, using natural insulation for climate control.

Many of these homes contained one or more interior camouflaged escape tunnels, lined with weapons, food, water, and various cooking utensils to be used in case of emergency evacuation. 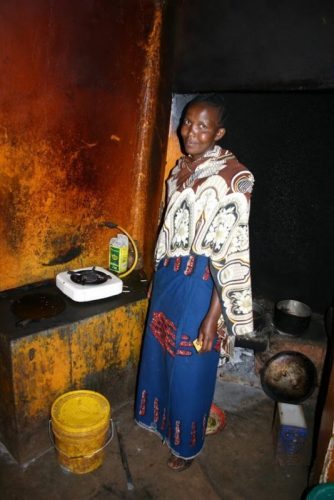 To this day the Iraqw seem a bit shy around visitors and my host told me this can be traced back to the old days when they got used to huddling in silence, underground, so their enemies would not know they were around.

Over the years it became an ingrained part of their culture.  Apparently, he had overcome his shyness to the extent that he insisted on giving me a thorough 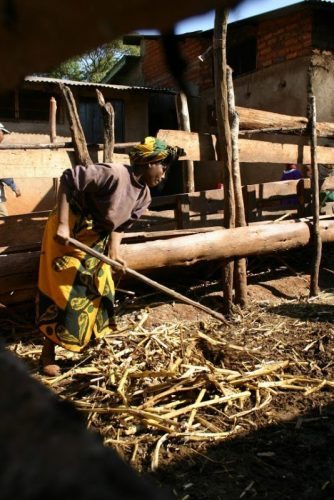 lesson in the proper way to throw a spear after telling him I had never done so, and he was only satisfied after I had “killed” the same tree three times in a row.

I do believe however that this shyness may end with the current generation because from the moment I entered the village I was taken in tow by curious, smiling children, who led me by the hand through each and every building while peppering me with nonstop questions about where I came from.

It always seems to be the children who begin the conversations and I have learned as much from youngsters as they ever have from me on these journeys.

Of course, the Iraqw’s  war years ended long ago, and today they live in peace with all their neighbors, mostly occupying prefabricated homes provided by the Tanzania government, but still keep their underground homes close by for tradition and ceremonies, proud to show them off to visitors.

My host told me he uses his traditional house whenever his family gathers, as his above ground dwelling simply cannot hold them all.

Other times they act as a shelter for the cattle, especially during a storm, or as he added, a place to get away when his wife is angry at him!

Today they have modified the traditional design of these subterranean homes by making the entranceways larger and more secure to accommodate tourists, and they still love to show off their skills with the spear. 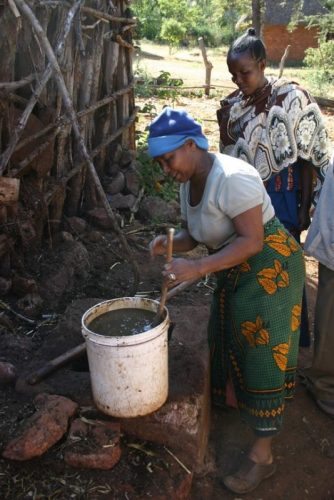 raqw women are highly skilled seamstresses who create vividly colored clothing for both men and women, made from tanned goat and cowhide, producing intricate patterns and designs that are very popular with visitors, and are unlike anything neighboring tribes create.

Millet is a staple of their diet in Tanzania, and they gave me a demonstration of how they still use an ancient stone, passed down through generations, to grind it, and showed me a giant woven basket used to store it in.

Equally fascinating to me is the fact that they collect all their cattle dung, shoveling it into large cement holding tanks underground where it ferments into methane gas.  This, in turn, is piped into their houses by thin plastic tubing, buried underground, where it powers gas cooking stoves and lanterns.  At the time of my visit, It was their only power source, but a very efficient one.

Between their subterranean housing and recycled fuel sources, this makes the Iraqw among the most environmentally friendly tribes on the African continent.

In the year 2000, a group known as the Sandemu Iraqw Art and Cultural Promoters built a display center in the village of Bashay in the Arusha district where they are constantly compiling a comprehensive record of the lifestyle, traditions, ceremonies, and history of the Iraqw people.

In the town of Karatu guided walking tours of local villages are available along with camping facilities and English speaking guides.

Tours may be booked through the Tanzania Tourist Board Information Office in either Arusha or Karatu.

jamesdorsey.com
Like this article? Share it with your friends!
If we've inspired you to travel with this story, why not check out the prices to get there and make it happen. Search airfares, hotels, and rental cars here. Thanks!